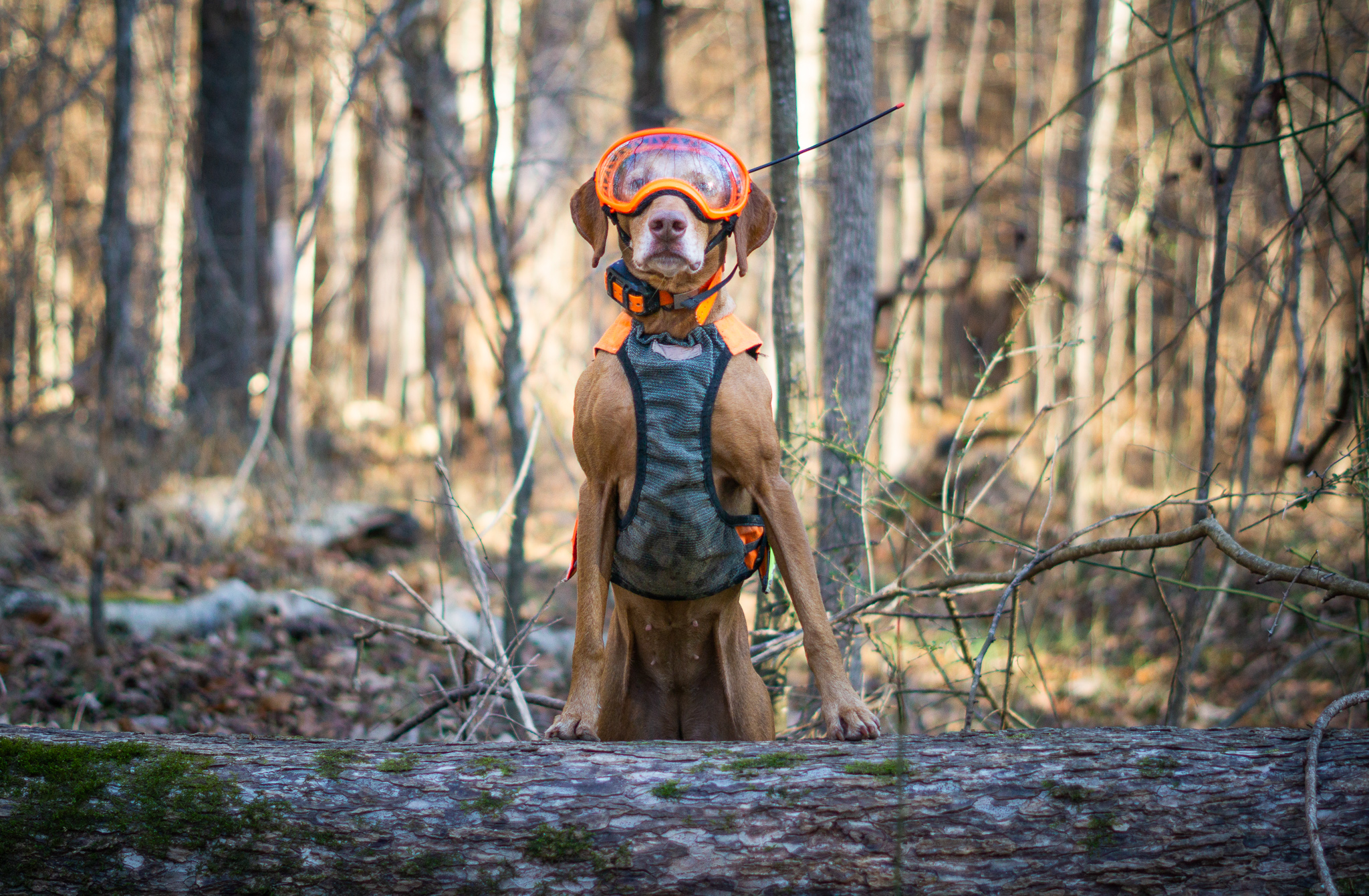 Competing/Hunting with an Older Bird Dog

Zara turned eight a few months ago. According to the American Kennel Club, that makes her about 51 in human years. While I don’t really think of her as “old”, she’s definitely not a youngster, either. This is also her first season running field trials and her second hunting season. Since we got into this game so late, I haven’t had the experience of hunting/competing with a young dog. I am probably being overly cautious, but I’ve been really cognizant of keeping her health in mind this year. In my opinion, field trials and hunting wild birds (such as woodcock) is more taxing on Zara than training sessions on pen-raised birds or doing AKC hunt tests/NAVHDA tests.

Field trials require her to run full-out for 30 minutes to an hour. She’s being evaluated on her running ability and style much more than in a hunt test. AKC hunt tests also move at a slower pace. There’s more circling around a bird field, and more time spent on bird contacts, because most of the birds are shot.

Hunting woodcock has also been physically draining because we’ll be out in the woods for 2–3 hours. While she’s not moving as fast as in a field trial, she’s still continuously searching for most of that time.

I really don’t know the right answer to keep her healthy and in prime condition, but these are the things I’ve been doing this winter to hopefully help.

Plenty of Rest After Hunting

This season, I’ve gone woodcock hunting more frequently than I did last year. However, I still only take Zara hunting a maximum of three days per week. Last year, I did a max of two days a week. I noticed that she was really exhausted after hunting last year, possibly because it was her first season and the experience of hunting woodcock was new. This year, coming off of the fall field trial season, she seemed to be in better shape. After a 2–3 hour hunt in the morning, she would still be up for playing or going for an afternoon walk. Last year, this was not the case. A similar hunt would knock her out for the whole day.

Regardless, I’m very careful about letting her rest after hunting and I prefer not to hunt her on back to back days. We only do a maximum of 3 hours in the woods. She’s ready for a nap after that amount of time, and to be honest, so am I, haha.

This past fall, I entered Zara into three field trials. AKC field trials typically take place over three days – Friday, Saturday, Sunday. At Zara’s first trial this fall, she earned a placement, which then qualified her for Limited stakes. Typically, most trials will have several stakes that are open to finished gun dogs. This may include Amateur Gun Dog, Amateur Limited Gun Dog, Open Gun Dog, and Open Limited Gun Dog. (There may be other stakes like Amateur All Age or Grand Open Limited Gun Dog, too.) The Limited stakes are open to dogs who have previously placed. Amateur stakes are open to anyone who is considered an amateur and doesn’t receive money for running dogs. Open stakes are open to amateurs and professionals. Since I am an Amateur and she is eligible for Limited, I could potentially enter Zara in four stakes in each trial.

I did not do that. Instead, I only entered her in two stakes per trial. My preference is to enter her in a stake on Friday, let her have Saturday to rest, and then enter her into another stake on Sunday. I found that this gave her enough rest time to really recover and be able to run strong on Sunday. At the last trial in late November, I did enter her in back to back days and I don’t think she ran as hard on Sunday.

As a runner myself, I try to think about Zara as an athlete. If I had a hard workout one day, I would not want to do another hard one right after. I know dogs are not the same as humans, but I think this comparison has some merit.

As I’ve discussed previously, Zara (and Colombo) eat a homemade raw meat diet. I believe this is the healthiest for them and part of the reason Zara has remained so active even though she’s technically a “veteran” dog. This season, I’ve added a few more things to her diet to help her recover from hard hunting days. She’s been on Cosequin joint supplements for about 2.5 years. In August 2021, I added Myos Canine Muscle Formula, which is a powder that is made from fertilized egg yolks. It’s supposed to help increase muscle size and mass. I first heard about it on the Gun Dog It Yourself podcast when the the host had Dr. Sherman Canapp and Dr. Debra Canapp of Canapp Sports Medicine on an epsiode. They recommended it for older dogs and active dogs to maintain muscle mass. I figured it might help since I knew she was going to be doing field trials. If you’d like to try it for your dog, you can use my code “accidentalbirddog20” to save 20%.

Although I increase the amount of raw food Zara is eating on active days, I’ve been adding some extra calories after we come back from hunting. Although I typically stay away from straight carbohydrates, I’ve been giving her about one third cup of cooked oats to help maintain her weight. When she hunts a lot, she can lose weight quickly. Recently, I made a batch of bone broth and have been feeding that as well. Bone broth is supposed to be good for the joints and has other benefits. 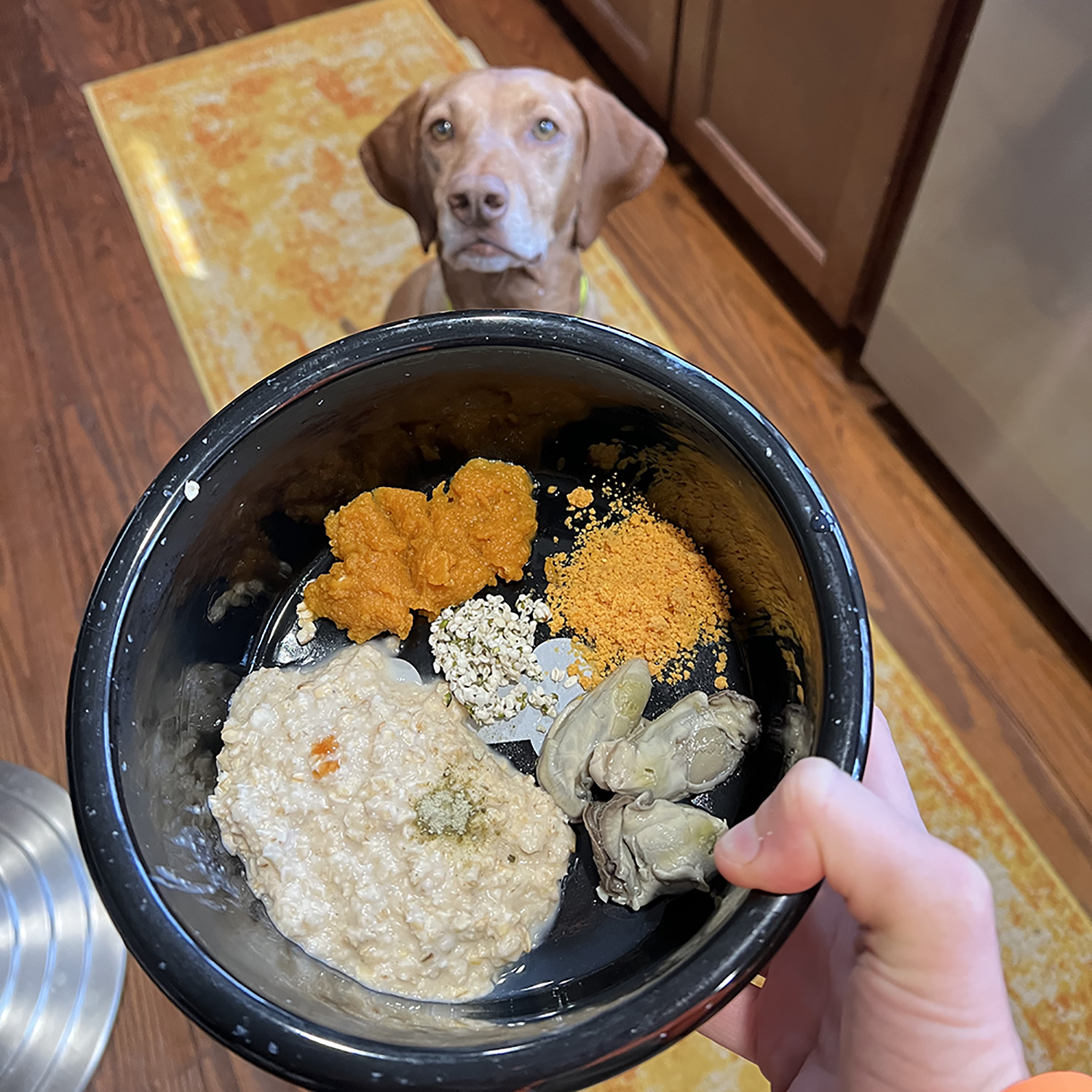 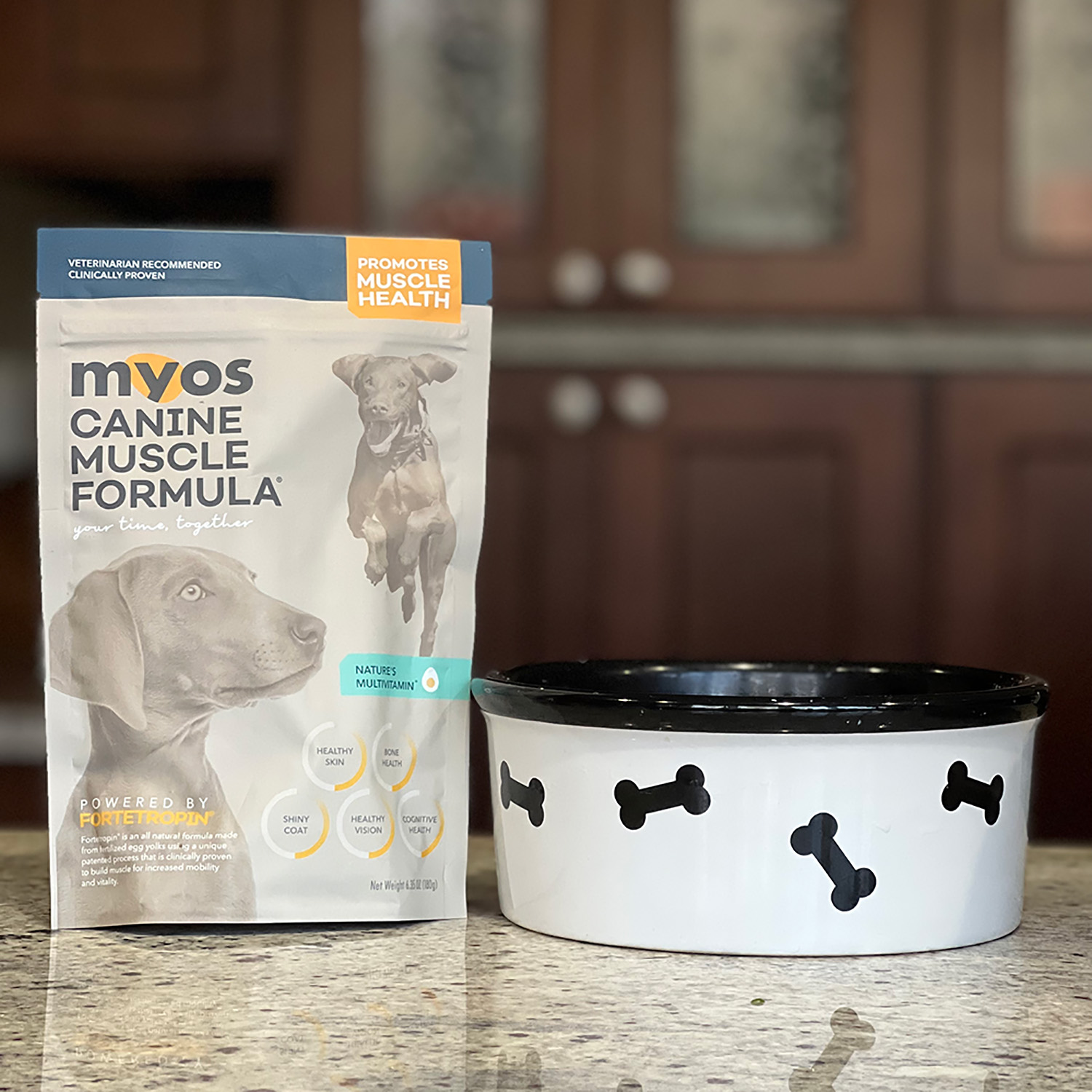 In August 2021, I decided to add Myos Canine Muscle Formula to Zara’s diet.

Since Zara is a thin, short-haired vizsla, she’s never been a fan of extreme cold weather. In the winter, she sleeps under the covers in our bed. However, this fall it seemed like she was getting colder than normal when we went to field trials. She looked very unhappy until I warmed her up. Although most people at field trials don’t put coats on their dogs, I have no issue outfitting Zara for cold weather. I want her to be comfortable. When I know it’s going to be cold, I make sure to bring her coat and plenty of towels and blankets so I can bundle her up in her crate while she’s waiting.

On the contrary, I was pleased with Zara’s heat tolerance this summer. It gets quite hot and humid in North Carolina during the summer months, but we still go out in the heat. We did a lot of hiking in shady areas with access to water. After a dip in the lake, she’d be good to go for about an hour. She also seemed to cool down pretty quickly. But as she gets older, I will make sure to keep an eye on how she does in the heat. 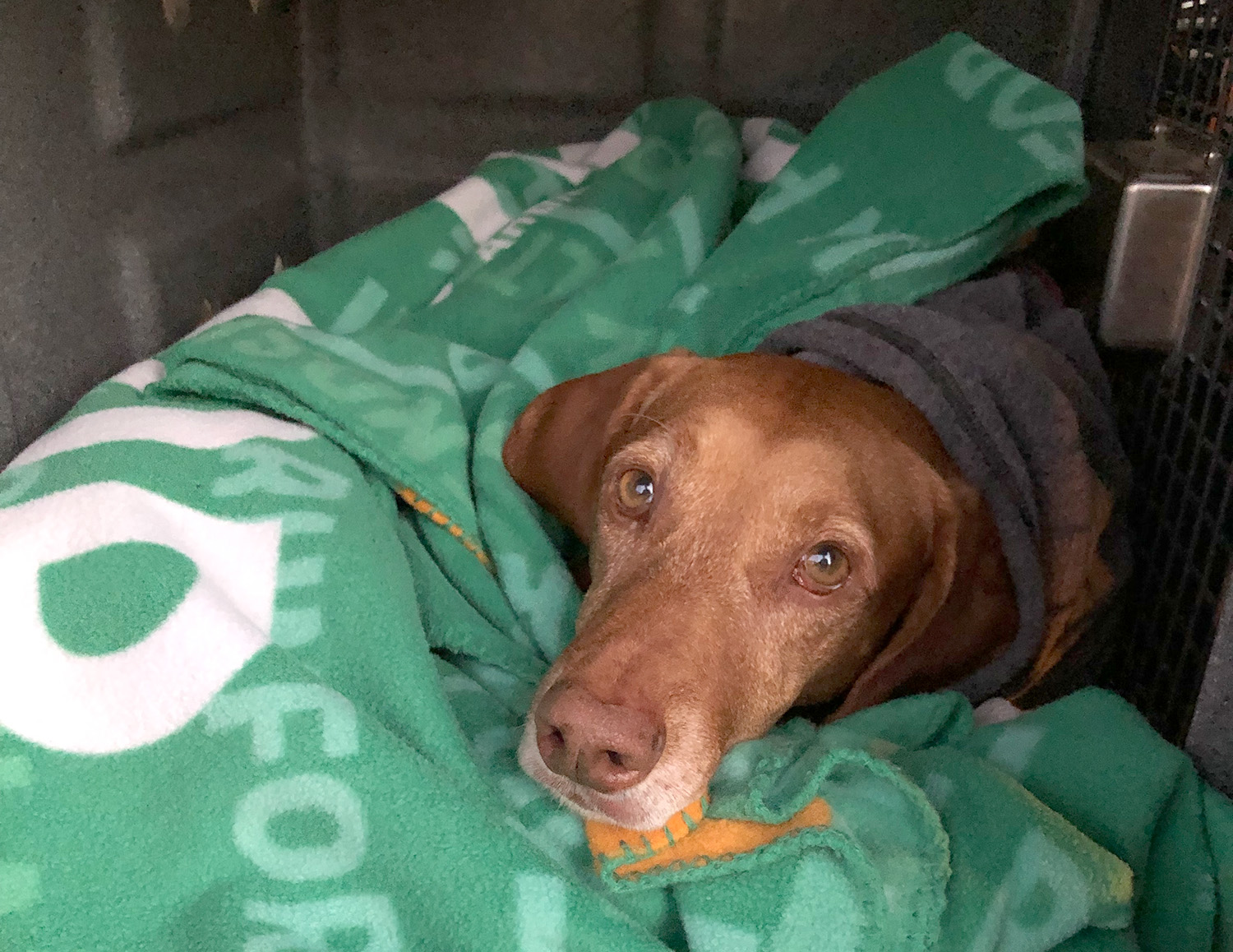 Cold Zara at the Slate River Bird Dog Club field trial in November 2018. She was wearing her Voyagers K9 coat and had a blanket on top of her.

Zara has always been very playful at home. She loves toys and she spends a lot of time romping around with them and dropping them in our laps to get us to throw them for her. After a hard hunting day, I’ve noticed that she is not as playful. She just hangs out on the couch instead. Once she starts playing with her toys again, I can tell she’s feeling recovered. I try to use this an indicator for when to take her hunting.

Do you have an older dog that you are hunting or competing with? Have you done anything specific to help them stay in good shape? Leave me a comment below.