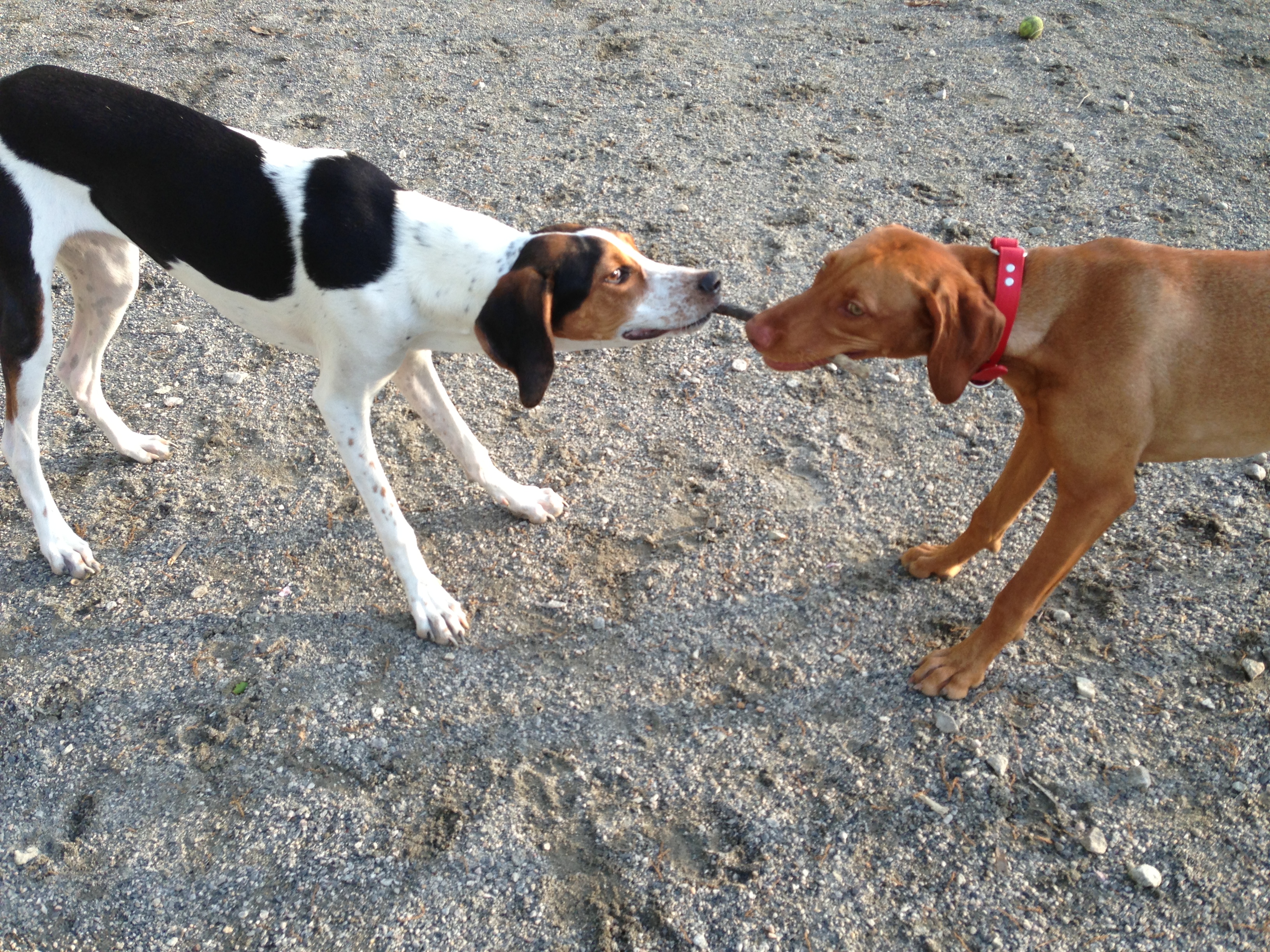 Image above: Zara and her friend Waffles, a coonhound mix, at the Fairlington dog park

Before we got Zara, I had only been to the dog park a few times, when we were watching a friend’s dog. It always seemed like a fun place to be, with cute, happy dogs running around everywhere. Of course, it was not a place I could go to without a dog without people giving me strange looks. I guess it’s kind of like an adult hanging out at a playground with a child in tow – it’s kinda creepy.

When we first got Zara, we lived in a townhouse with a small patio “backyard.” It was concrete in the middle with mulch beds all around the perimeter and a five foot fence. It was great to let her outside to do her business but it wasn’t large enough for her to get any exercise. Since it was winter when we got her, we were very limited in the outdoor exercise we could provide her until she had had all of her shots. When she reached 4.5 months and had finally gotten all of her shots, it felt like such a relief to be able to go to the dog park.

We started out going to the park in our neighborhood of Fairlington, which is a circular-shaped enclosure with fine gravel on the ground. It was only a 10-minute walk/2-minute drive from our house so we quickly got into a routine of going twice a day, once in the morning before work and once in evening. Sometimes, if we were working at home, we’d even take her a third time during lunch to run around for a little while. Even if there weren’t any other dogs there, we could at least throw a tennis ball for her.

After going there for a while, I was able to recognize almost all of the dogs of the dogs in the park. Since it’s a small neighborhood park, it’s not as popular or well-known as some of the other ones in the area and the same people tend to go there. Since I’ve been going to the dog park so much in the past couple months, I’ve come to several realizations.

First off, people are very finicky when it comes to the weather. If it’s too cold, too hot, raining, looks like it’s going to rain, or has just rained, not many people are there. Before we moved into our current place, which has a yard, we would literally go to the dog park at least twice a day, every day, during the week, unless there was some compelling reason we couldn’t. Once, I was telling another girl at the park how often we went and she looked shocked. But what else are you supposed to do with a high-energy puppy when you don’t have a yard? A walk around the block wasn’t going to cut it. I guess if you don’t own a high-energy breed, going to the park isn’t as much of a priority.

Secondly, a lot of people go to the dog park as a social outing for themselves as much as their dog. I’ve met some very lovely people at the park but socializing is not my focus when I am there. My eyes hardly ever leave Zara. I can have a conversation and watch her at the same time, but if she starts getting into trouble, I’m headed toward her. I’m also not afraid to jump in if another dog starts acting aggressive or even questionably aggressive. I’d rather not take chances (especially now, after she’s already had a bite wound). One time, I pulled Zara away from a dog that was growling a lot as they were playing. It would have probably been fine, but Zara was on her back and the other dog was getting in her face. The owner seemed offended and protested, “My dog was just playing.” Maybe that was the case, but why risk it?

Zara has made several doggie friends at the park and I think it’s allowed her to become more confident around other dogs. We don’t go quite as much now that we have a yard and I think we will cut down our visits even more once we can starting running with her. But it’s nice to have the option and we’re lucky to be so close to several dog parks.