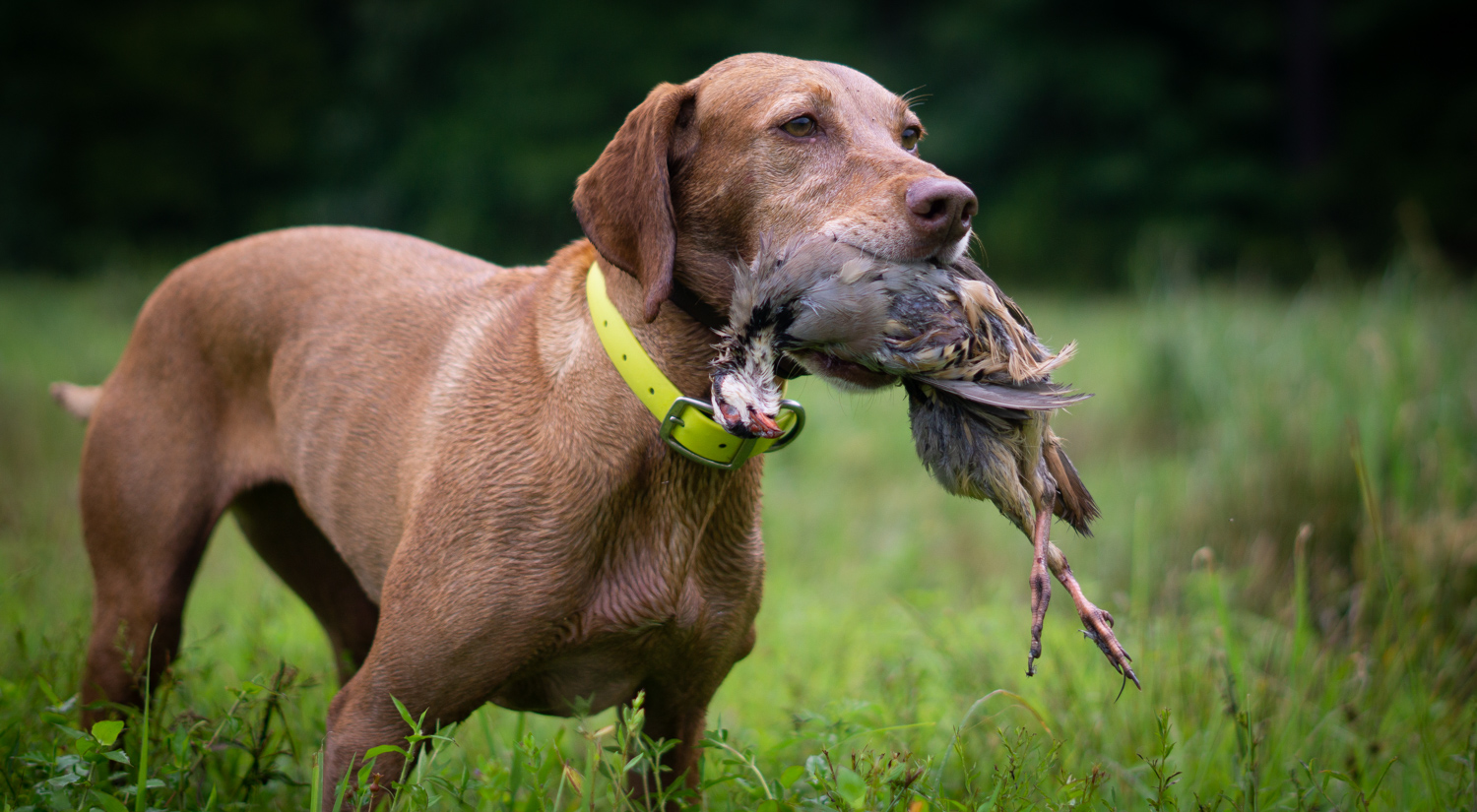 This summer, Zara and I have been training for the NAVHDA Invitational. It will be held September 15–18th about an hour south of Albuquerque, New Mexico. Unfortunately, where I live in North Carolina, live upland birds such as chukar and quail are really hard to find between March and September. But with the timing of the Invitational (IT), I had to have live birds over the summer. I also don’t have the capability to store birds for an extended period of time at my house (I live in the suburbs and let’s just say my husband isn’t going to let that happen haha). If I did, then I would have just bought a large quantity in March and kept them in a pen for the summer months.

So if you’re in the same boat, what should you do? In March, I sat down and mapped out a plan for the birds I anticipated needing and how I would get them. These are some strategies I used and hopefully this post can help you too.

Train Ahead of Time

With the way the qualification period for the Invitational works, you will know, at a minimum, nine months before you are going to attend. In many cases, people qualify their dogs a year or more in advance. With that in mind, I would recommend teaching backing/honoring and cleaning up any steadiness or retrieving issues before the summer hits. In most parts of the country, pen-raised (and wild) birds are much more plentiful during the fall, winter, and early spring. Therefore, if you earn a Prize 1 Utility score in summer 2022, you can use the fall/winter of 2022–2023 to teach your dog Invitational-level field work before birds become hard to get. Some people run their dogs in AKC Master Hunter tests in preparation for the IT, too. This exposes your dog to a variety of bracemates and since the criteria for MH and the IT field work are very close, this is a good test run.

If you do this, then backing and running with a bracemate will not be a new concept that you need to teach a few months before the Invitational. You’ll be able to focus on maintaining and/or polishing the skills, which will certainly take less birds than if you were teaching the skill from scratch. I actually ran Zara in Master Hunter tests in early 2021 and in field trials last winter, so she already understood backing going into this summer. Of course, she doesn’t always like doing it, but that’s a story for another day. ;) 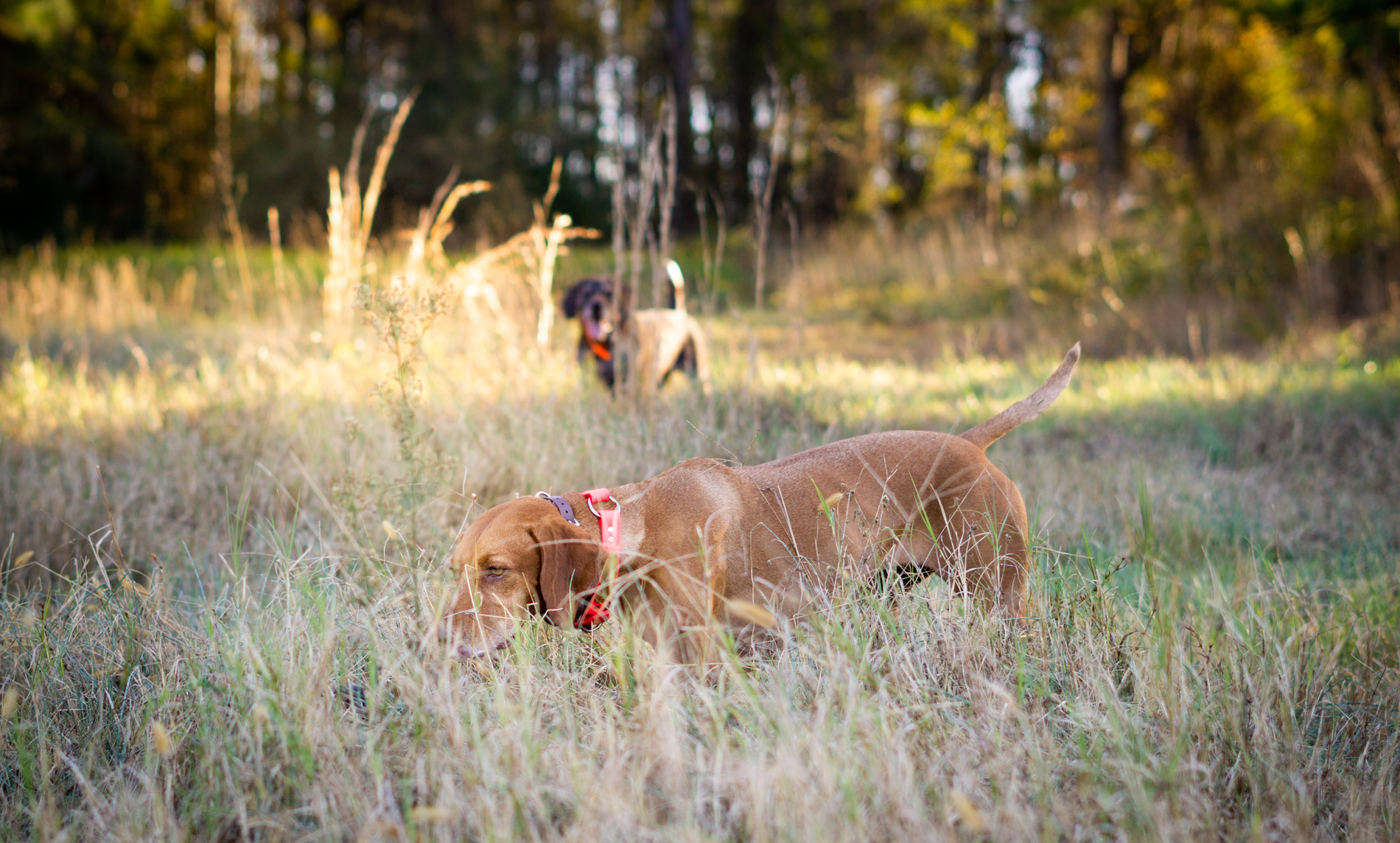 Zara runs a brace with a GSP to work on backing in November 2020, a year and a half before we started dedicated Invitational training.

Take Advantage of Any Bird Availability

In March, I had finished four months of running field trials, broken up by two months of wild bird hunting. I was ready for a break, knowing that we would need to train for the Invitational this summer. However, at the last trial of the season, I realized that I had a retrieving issue I needed to fix. While typically birds are not available after March, the bird dog club where I train bought some excess quail and had plenty of birds available in April. Even though I wanted to take some time off, I knew it would be worth my while to use the quail that were available and keep the training up to fix the retrieving problem. Quail are also not typically used at the Invitational, but for the most part, a live bird is a live bird. So if you happen into any birds, even if the timing is not ideal, I’d advise you to jump on the opportunity.

Travel to Where the Birds Are

Even if birds aren’t available where you live, it’s possible that they may be easier to come by even a few hours away. I talked to another NAVHDA member who is going to the IT earlier this year and he informed me that the Keystone Chapter in south central Pennsylvania has birds available all summer long at their training days. While their training grounds are about five and a half hours from my house, my parents actually live only an hour away from there. So I joined the Keystone Chapter in April and made two trips up there in June and July to have access to chukar. It’s a good idea to travel to different areas when training for the Invitational anyway, so keep an eye out for locations that you can visit that might also have birds available.

Ask People Who Are Traveling to You to Bring Birds

On a related note, it’s possible that other NAVHDA members (or friends, or family members…) will visit your area from an area that does have birds available over the summer. It’s worth checking to see if they would be willing to bring some extra birds for you. I was lucky enough to have another NAVHDA member visit in July from New Jersey, and he brought me 10 chukar along.

This one of the main strategies I planned to use when I started mapping out my training calendar. While I can’t store birds for a long period of time, I can keep some for a day or two in my garage. To do so, all you need is a bird box or small dog crate (as well as bird food and water). At both Keystone training days, I bought extra birds and made plans to train the following day with other people on different grounds. Instead of spreading out your training over a week or two, you’re concentrating it into two- or three-day blocks. 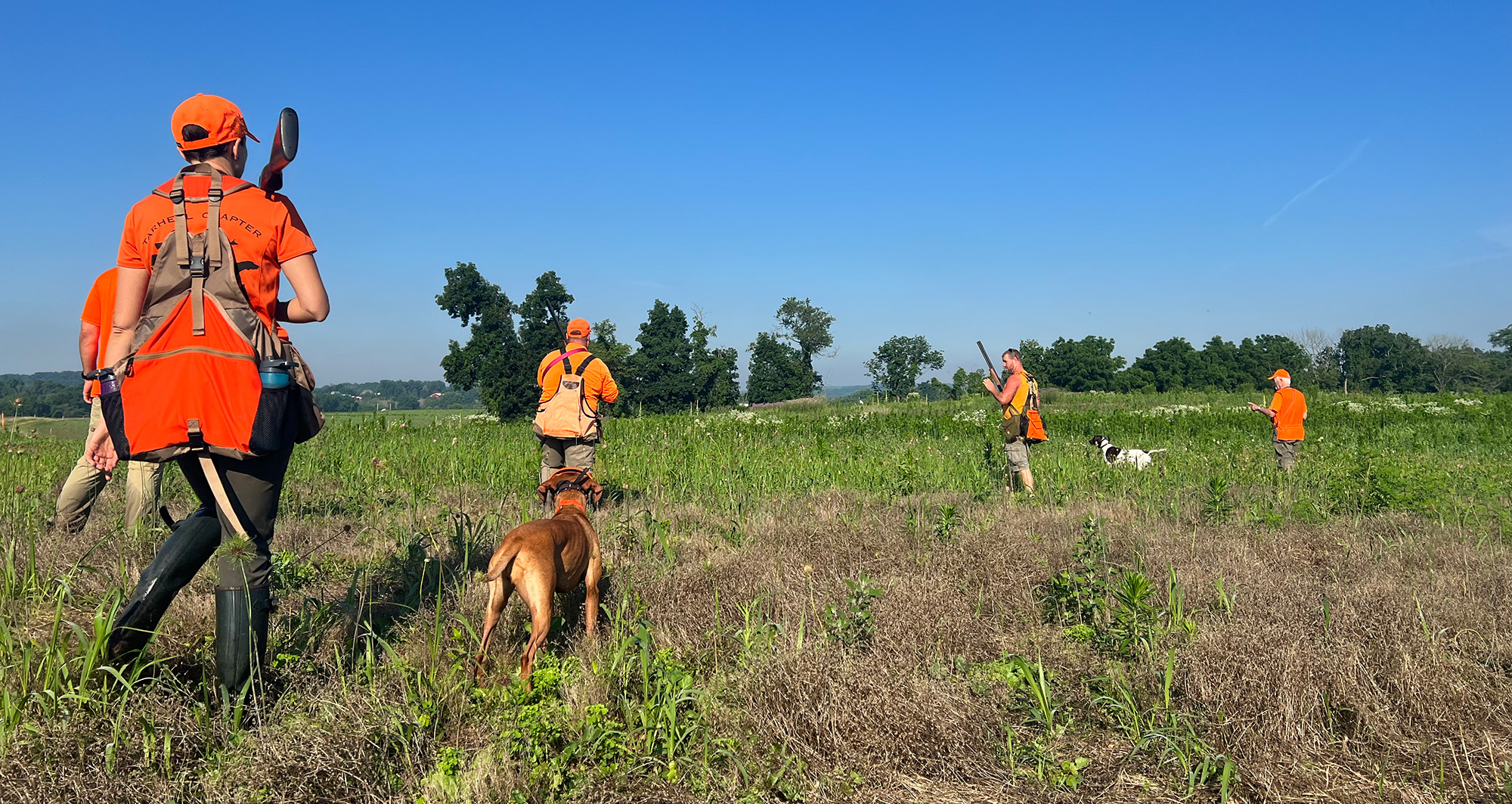 Training with the Pennsylvania-based Keystone NAVHDA chapter in June.

Another option to access live birds is to mail order them. I talked to several people who did this successfully. However, it is a riskier option give how unreliable the postal service is and weather can impact the ability to ship. Zukovich Game Birds is located in Pennsylvania and raises chukar, quail, and pheasant all year long. They also ship everywhere in the U.S. While it will cost more to mail order birds, if that’s your only option, you may have to deal with the extra shipping fees. I thought I was going to need to mail order chukar at some point this summer, but luckily I never had to do it.

Store Your Birds in Other People’s Pens

If your dog has gotten far enough to qualify for the Invitational, chances are you know quite a few other NAVHDA members or bird dog enthusiasts. Therefore, it’s likely that you know someone who DOES have land and the ability to store birds over the long-term. It’s worth asking if they would be willing to keep some birds for you if you provide or pay for food in exchange. Or maybe you could store some at a training facility or bird dog club you are part of, as long as the owner understands that they are your birds, not a communal resource.

Be Ready to Buy Birds As Soon As They’re Available

In North Carolina, bird growers usually have mature chukar and quail available at the beginning of September. However, they are often willing to sell slightly immature birds a few weeks before that. On August 15th, I bought ten 11 week old chukar from a bird grower. While they’re not considered adults, they still flew fine. They were just a little smaller than an adult.

In March, I was talking to another NAVHDA member who has gone to the Invitational before and lives in a Raleigh suburb as well, so he understood my dilemma about not keeping birds for an extended period of time. He said that if I really got into a bind, I could consider trapping wild pigeons (they are quite common in Raleigh) and keeping them in a small cage to use for training. The benefit of pigeons, he said, is that they will still fly well even if they’ve been in a small pen for a while. Thoughts of me setting pigeon traps under the bridges in downtown Raleigh ran through my head as I listened to him. It’s times like these that I really know I have gone off the deep end in this hobby.

Thankfully I did not have to do that this summer, although I appreciated his creative thinking. If you’re desperate for live birds, that could be a good strategy. You could also try to buy birds through nontraditional sources, such as Craigslist or a farm swap. There could be people willing to sell quail or other game birds. 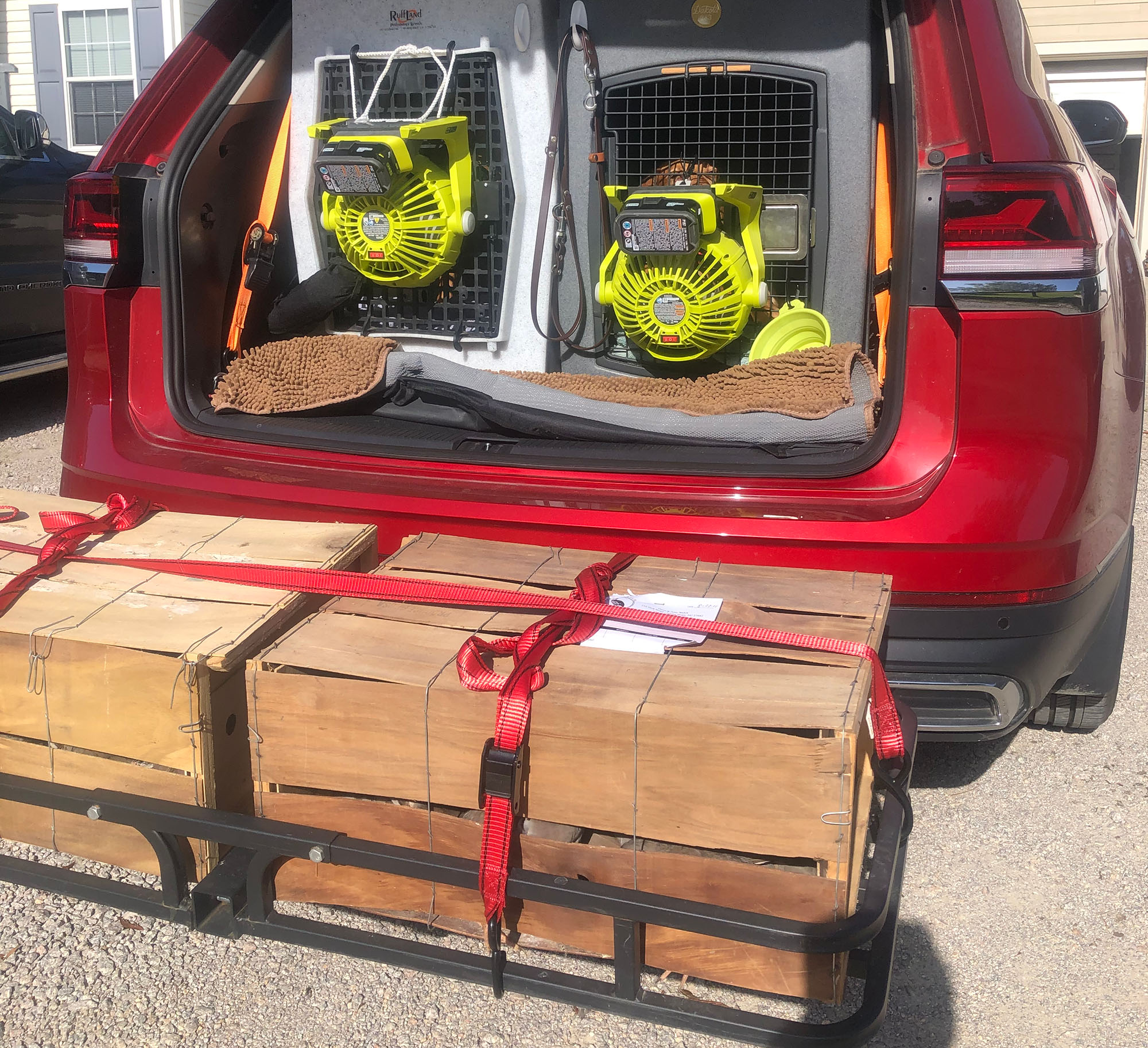 Two boxes of not quite adult chukar that I picked up last August.

You will also need multiple dead ducks for Invitational training. These are used for the double mark retrieve, the blind retrieve, and the honor by the blind sequence. In North Carolina, live ducks aren’t easy to come by in the summer either. However, dead ducks can be much easier to find and store. My main advice for having enough ducks is to start stockpiling them the moment you think you’ll be heading to the Invitational. Last summer, Zara and I worked on duck search in preparation for the Utility test in October. I ended up with a lot of dead ducks that I put into bags and froze in my garage freezer. I knew that we were going to go to the Invitational if she got a Prize 1, so I wanted to have as many ducks ready as possible. Frozen ducks will last quite a while. I started the summer with 17 dead ducks in my freezer (my husband avoids opening that one…). With a month to go, I still have plenty left because I’ve used each one a few times and I trained with dokkens instead of ducks for the first few months to stretch my supply.

Have you had to use any of these strategies for Invitational training? I hope you find them useful. It’s certainly possible to have a successful training season even if you live in a city or suburb and can’t keep a large coop of 20+ birds.