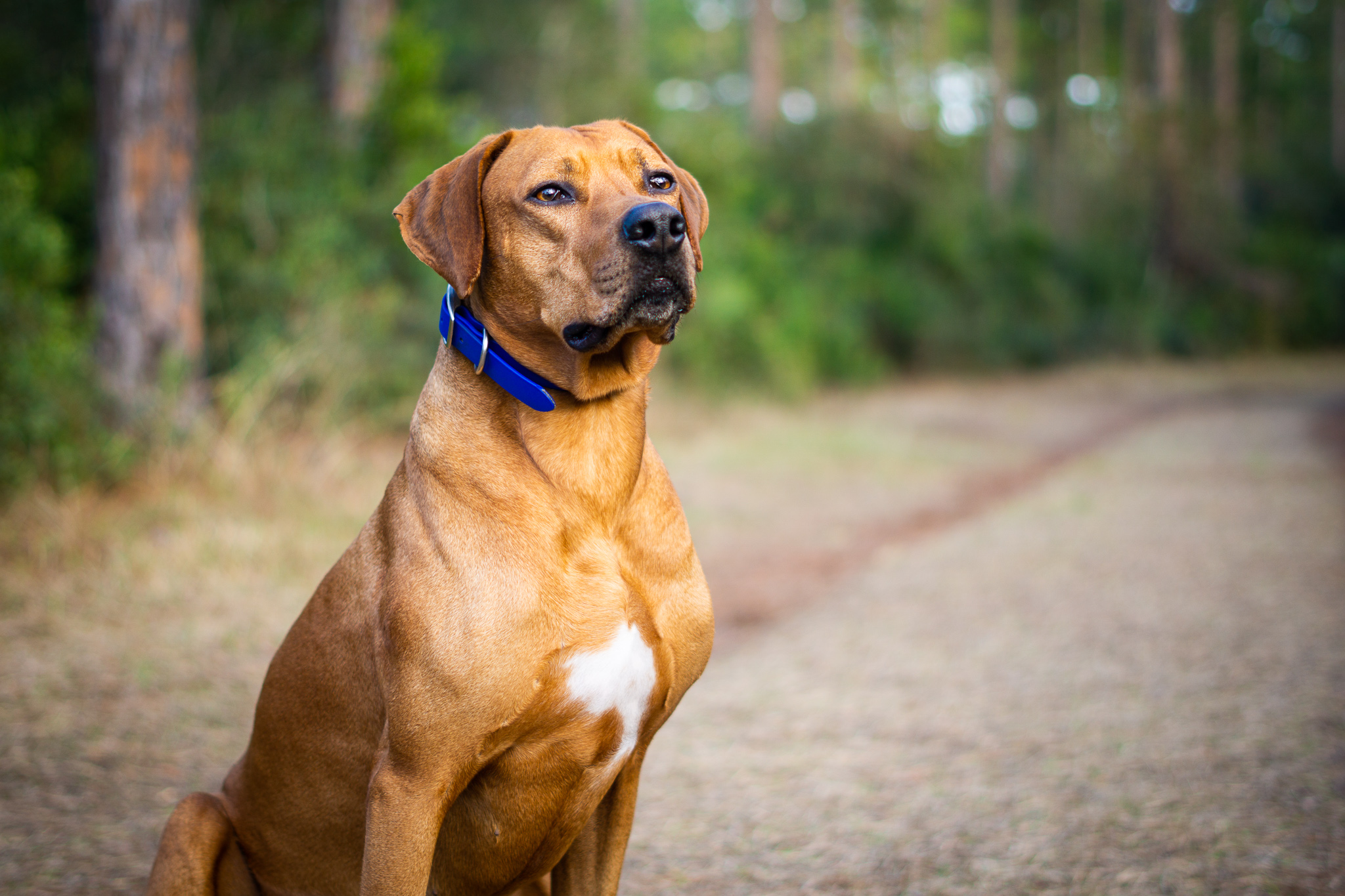 Living With a Rhodesian Ridgeback

Now, obviously every dog breed really should have consistent training. A well-trained dog is a pleasure to live with and can be taken to a variety of places without any issues. However, training is extra important with a ridgeback due to their size, stubborn nature, and hunting instincts. The official Rhodesian ridgeback standard lists the desirable weight for males at 85 pounds and females at 70 pounds. However, most of the males I’ve seen, in the show ring and otherwise, are pushing 100 pounds, if not more. Colombo is 97 pounds and he is not overweight. Trust me, no one wants to live with an untrained 100 pound dog. Because they were bred to be independent hunters, ridgebacks don’t necessarily have a desire to please. They think on their own and that means they can be stubborn. Training them requires consistency, patience, and creativity so they don’t get bored.

Rhodesian ridgebacks are considered hounds, which is a good thing to keep in mind if you live with one. That means that they are very driven by their nose. Sometimes when I’m walking Colombo around the neighborhood, he will latch onto a scent and try to drag me toward it. Then he’ll stand there sniffing it for five minutes if I let him. They can also be very scent-driven in the house, which means that they may be constantly hunting down food. Thankfully, Colombo is not one of those dogs, but a lot of ridgebacks are known for counter-surfing and stealing food.

They Have a True Off-Switch

As the owner of a high-energy dog who is involved in lot of bird dog activities, I hear a lot of people talking about whether or not their bird dog has an “off-switch” or not. In some of the Facebook groups I’m part of, this seems like a prized trait: a bird dog that can turn it on in the field, but is chill and content to lay around in the house. I’m not sure any of the high-energy bird dogs are really super calm in the house. Yes, they can certainly be taught to settle and I’m sure some breeds are calmer than others.

However, Rhodesian ridgebacks really are super chill most of the time. As long as they get sufficient exercise, they will lay around the house all day. In the evenings, after his walk and dinner, Colombo is on the couch for the remainder of the night unless Zara does something to really rile him up. At the same time, she’s dropping toys in our lap so we’ll play with her. It’s nice to have a dog that can do endurance activities if needed, but will also easily settle.

Ridgebacks have a short coat and they were originally bred in the warm climate of Zimbabwe. Because of this, they get cold easily. In the winter, Colombo definitely needs a coat if it’s in the 40s or below. Inside, he expects us to cover him with a blanket when he’s lying on the couch or he will whine. At night in the winter, he wears fleece pajamas to bed. It sounds silly, but they keep him warm at night in his crate and he won’t wake me up crying to cover him with a blanket. ;)

Colombo also LOVES to sunbathe. He spends many hours outside on the deck, soaking in the sun. When one of my friends came to visit with her two ridgebacks, all three of them were out there! 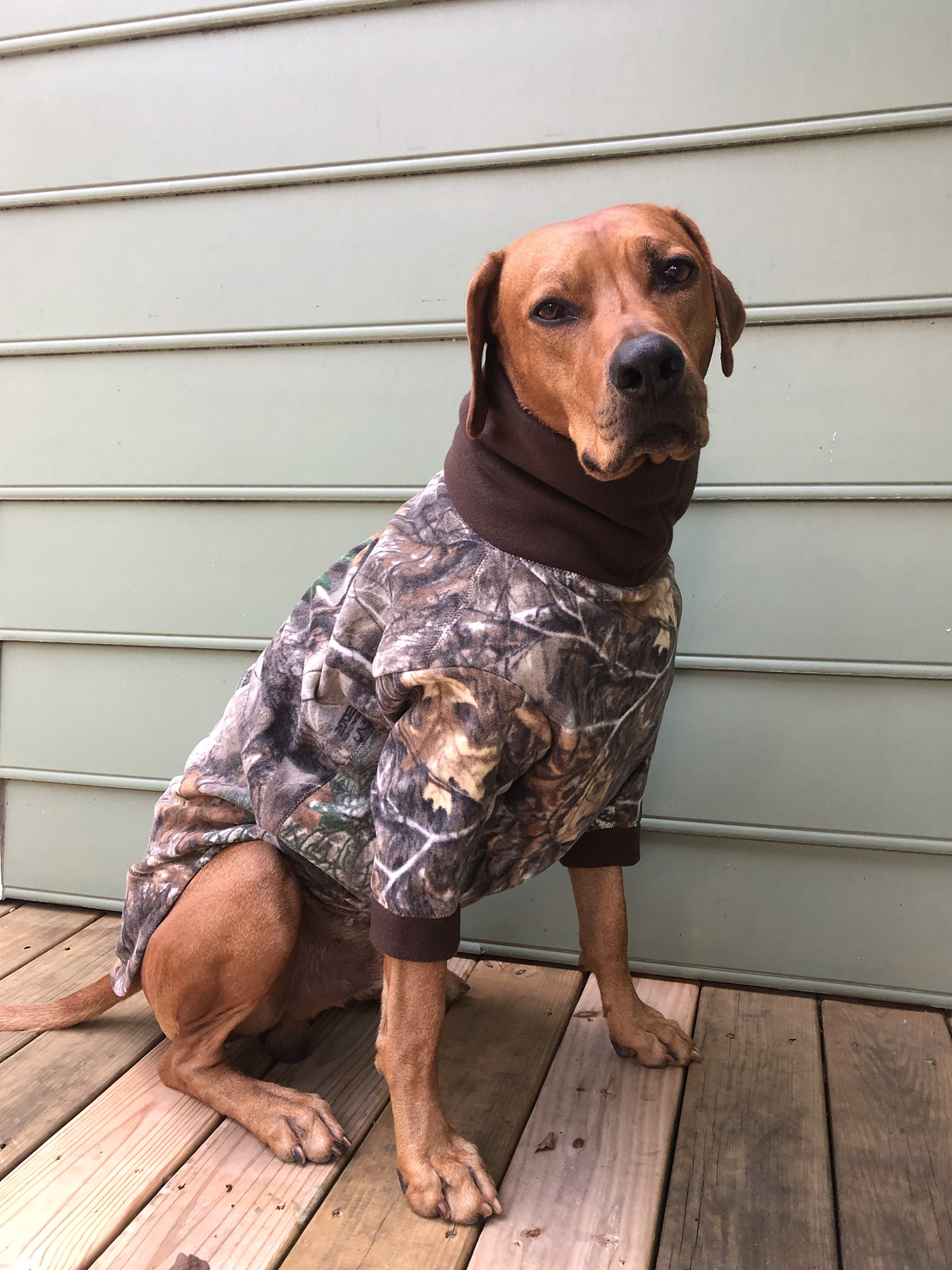 Colombo has a few pairs of fleece pajamas he wears in the winter. 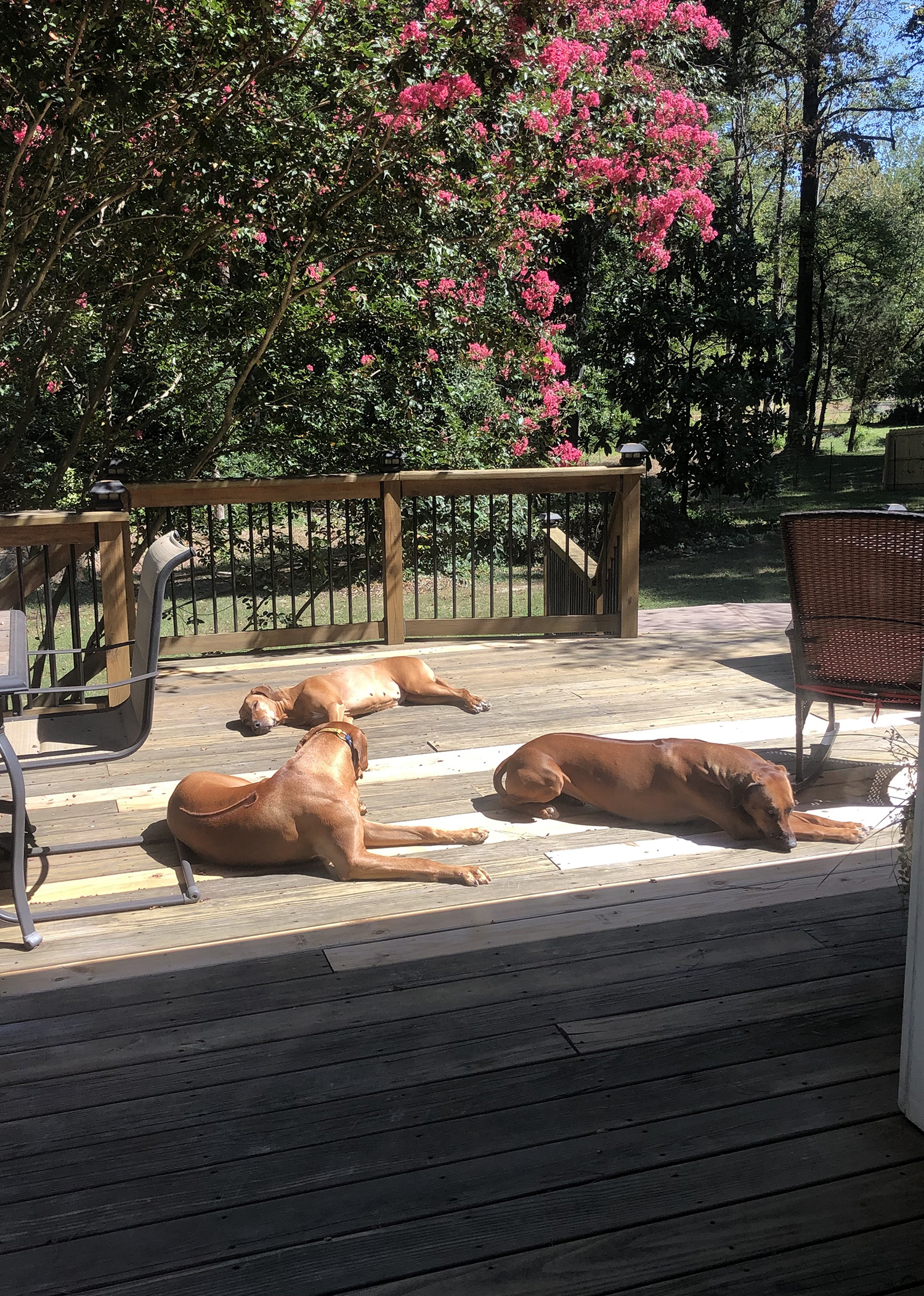 Colombo, Rylyn, and Wynry all enjoy the sun on a September day. Note how Zara is no where to be found! She was probably running around the yard, hunting something.

They Attract A Lot of Attention

While we have always gotten a lot of people coming up to us when we’re out and about with Zara, now that we also have a ridgeback, Colombo definitely attracts more attention. I think this is partially due to his size. He’s about 100 pounds, so he’s not easily overlooked. It also seems like a lot of people have heard about the ridgeback breed and are eager to chat about them. More people know ridgebacks than vizslas. The ridge down his back also attracts a lot of attention and comments. I don’t mind people talking to us or petting Colombo, but if you are a very private or shy person, you may find this annoying when you go out in public.

Ridgebacks Can Cause Damage

Even with training, a big dog can hurt you. Ridgebacks are strong and muscular and their rambunctious play style can result in accidental injuries to you or your family. Last year, I was doing some training with Colombo one morning. He performed well and I praised him. He got excited and jumped up and hit me in the mouth with his snout. He wasn’t trying to hurt me – he was just amped up. His snout hit my teeth and I realized later that one of my teeth was loose. A year later, it’s still slightly loose. I’ve been to several dentists about it. When they asked me how it happened, I explained that my dog hit me in the mouth. With wide eyes, they asked, “What kind of dog do you have?”

In February, Chris was horsing around with Colombo and Colombo batted him in the eye with his paw. His nail scratched Chris’ cornea and Chris had to go to urgent care the next day. Thankfully, there was no permanent damage. In both of these situations, Colombo did not mean to hurt us. But things happen with a big dog.

Colombo accidentally whacks Chris in the face while they are playing. He was not injured (that time at least).

They Are Rowdy Until About Two Years Old

There’s a meme floating around the internet that shows a photo of a puppy ridgeback, an adult ridgeback, and a velociraptor in place of a ridgeback to represent ages four months to two years. For the most part, this is true. Adolescent ridgebacks can be downright rambunctious and difficult to deal with. However, with consistent training and patience, they do settle down by the time they are two. Colombo is five now and he’s pretty lazy, although he does have velociraptor moments at least once a day – usually in the morning when he’s pouncing on Chris to wake up! 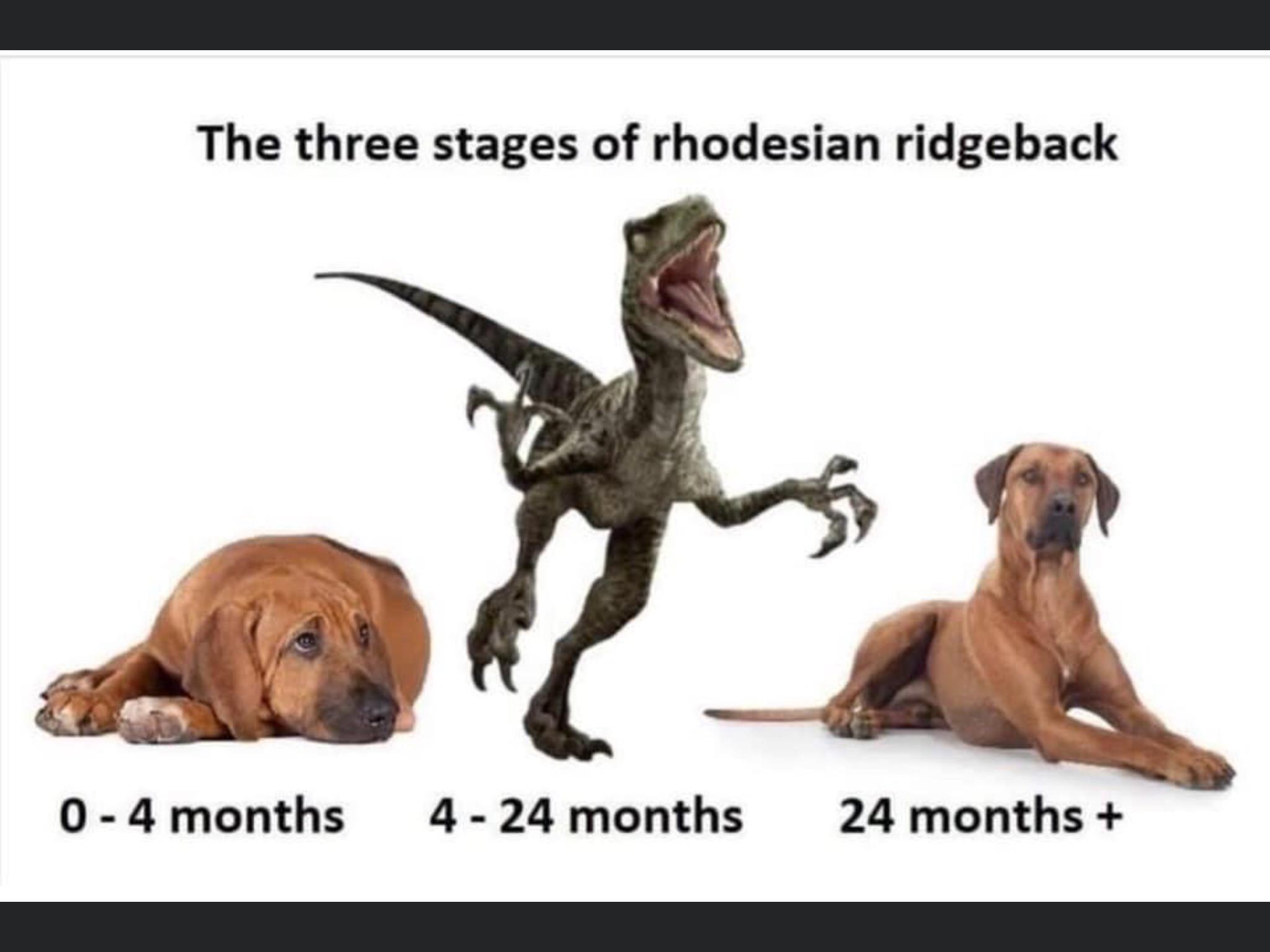 People Are Sometimes Scared of Them

I don’t think Rhodesian ridgebacks look that intimidating. Their floppy ears and regal look doesn’t imply scary to me. I personally think other breeds such as German shepherds, Dobermans, and huskies can look more intimidating. However, people are sometimes scared of Colombo. Again, I think his size plays a role. One time, I was walking around downtown Fayetteville (a small city in North Carolina) with Colombo. A big festival was going on, and the streets were crowded. Colombo was walking calmly on his leash, just lumbering along slowly. People were literally jumping out of our way when they noticed him. When we’re out in public, I do notice a small percentage of the population side-eyeing him, as if they think he’s going to leap at them at any moment. However, this means that having one around is a good deterrent. Although I generally don’t need protecting, the presence of a ridgeback is probably going to make someone think twice before they mess with you.

Do you own a Rhodesian ridgeback? What other characteristics have you noticed while living with one? Leave me a comment below!