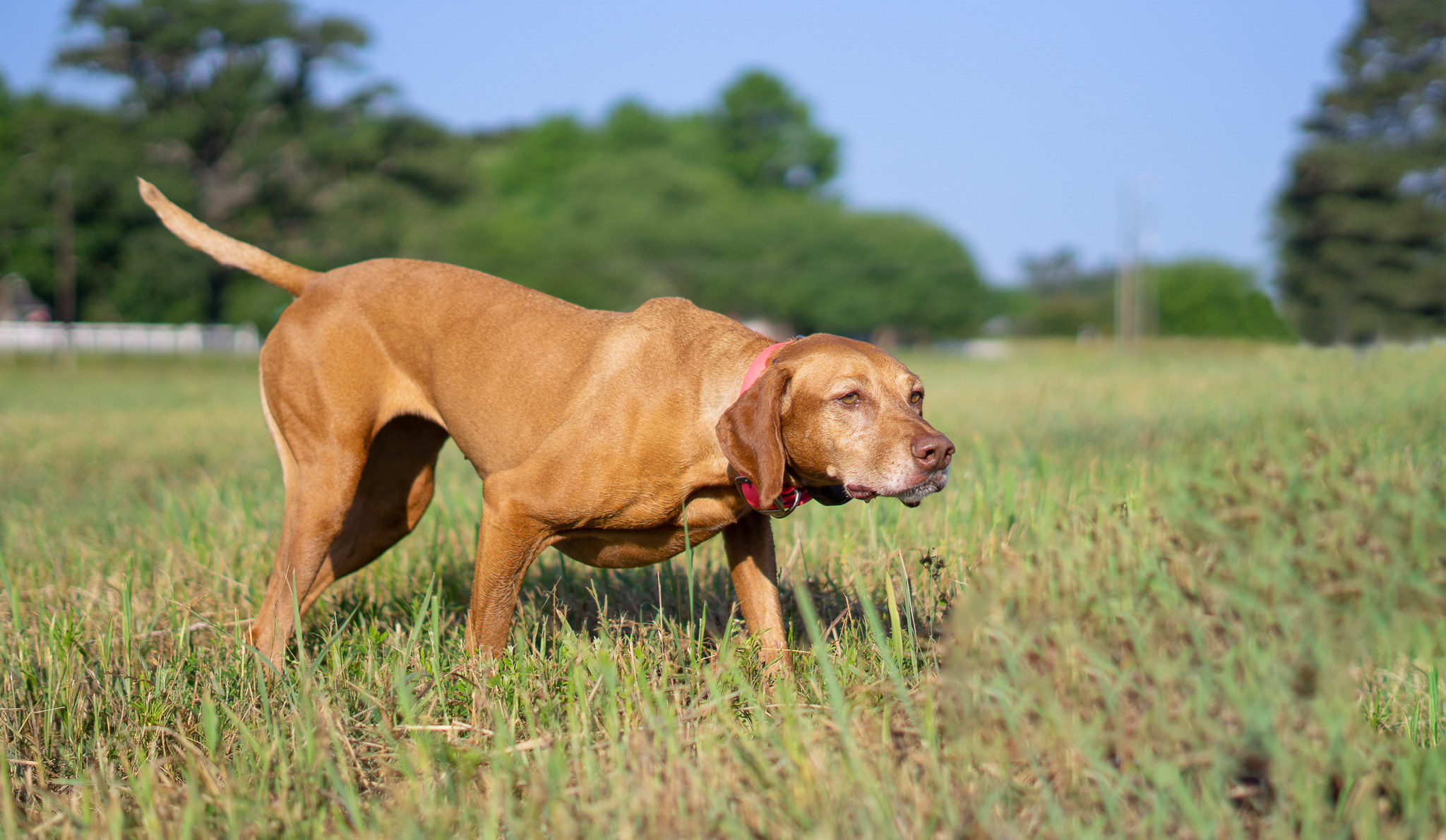 How NAVHDA Prepared Me for AKC Field Trials

It Depends on the Dog

Like many things in dog training/competing, it depends on the dog. Not every dog can transition from NAVHDA tests to field trials seamlessly. If you want to place in field trials, you’ll need a dog with certain characteristics. Some of this is genetic, like the tendency to run fast and far. Other things are trainable, such as improving your dog’s ability to wait after it goes on point. A lot of the dogs competing in AKC field trials are German shorthaired pointers, vizslas, pointers, English setters, brittanies, and weimaraners. You don’t see many wirehaired pointing griffons or German wirehaired pointers, which are very common in NAVHDA. The breeds that tend to move slower and not be as “flashy” may not do as well in a field trial, which is a subjective sport and style is judged.

The general consensus also seems to be that it’s better or easier to run a young dog in field trials first, and then transition to the more obedience-based NAVHDA tests. This is because it’s usually easier to rein a dog in than push them out. Dogs generally need to hunt closer in NAVHDA tests. I did the opposite with Zara and expanding her range has been my biggest struggle as I transitioned to field trials. Thankfully, due to her genetics, her natural tendency is to run bigger than many dogs, but she still hunts closer in comparison to vizslas who have only run in field trials their whole lives. 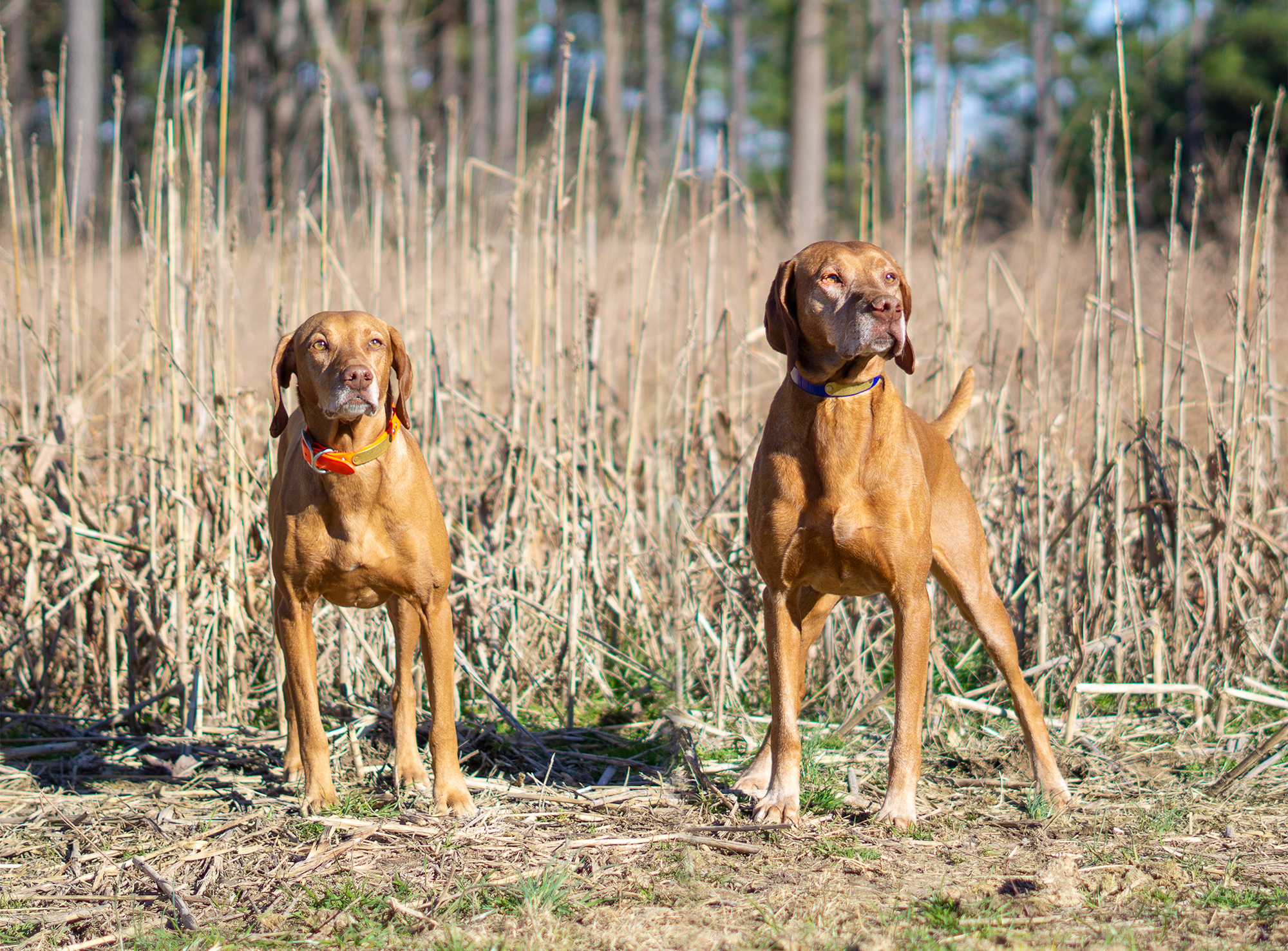 Zara (left) and her littermate Benny. Benny has been trained for horseback field trials since he was a puppy and his range is much further than Zara’s. Sometimes, he’ll run so big that he will get lost in a trial. In contrast, I didn’t start trying to expand Zara’s range for field trials until she was seven years old so she doesn’t run quite as far.

While complete steadiness (steady to release after the fall of the bird) is important for the NAVHDA Utility Test, I would venture to say that steadiness is even more crucial in field trials. In a lot of trials, the birds are not shot, so retrieving is not judged. Since it’s a competition, earning a placement can often come down to how steady the dog was. Even if your dog only turned to mark the flight of the bird or took a step or two, that might knock it out of the placements if the other dogs were rock solid. In the Utility test, some movement of the dog to mark the bird is often expected, so that it can complete a good retrieve.

However, from what I’ve seen, NAVHDA dogs are often steadier than field trial dogs. This is probably the case for several reasons. A dog that is trained to be steady to wing, shot, fall, and release is more likely to hold in a non-retrieving stake than a dog that’s only steady to wing and the shot of a blank pistol. Sometimes the dogs being run in field trials are young and “green broke”, so the excitement of the trial environment may cause them to temporarily forget their training and chase birds. You need to get around clean to get a placement, and sometimes getting around is half the battle, since a lot of dogs usually get picked up.

NAVHDA training certainly made Zara steady. With all the time we spent preparing for the Utility test over the past few years, she was put in many different scenarios – walking birds, wet birds, missed shots, etc.

You’ll Have An Advantage With Retrieving

Retrieving is an important part of the NAVHDA Utility and Invitational tests. A dog cannot earn a prize or pass without being a reliable retriever. To train for these tests, NAVHDA dogs spend a lot of time retrieving – shot birds in the field, dead ducks from a drag, live ducks in duck search, and more dead ducks in the Utility steady by the blind or Invitational blind retrieve sequence. Since not all field trial stakes involve retrieving, it seems like many field trial participants don’t put as much emphasis on it. Some breeds (pointers, setters) don’t even require retrieving for dogs to earn a Field Championship (FC) title.

Vizslas are required to retrieve to earn a FC title. However, retrieving is not judged as strictly as it is in NAVHDA tests. Most of the people I know who run vizslas in field trials have not put their dog through a force fetch or trained retrieve program. They still retrieve, but it’s not always as clean as you would see in a NAVHDA test. Therefore, if your dog has a reliable retrieve with a finished presentation, you’ll be at an advantage. Again, a good retrieve is not going to be the only thing that will earn you a placement, but it can’t hurt and will often help.

In fact, your NAVHDA dog’s retrieving skills may impress people and in a field trial, impressing the judges is pretty much what you want. When Zara and I went to a trial this past March, she earned a callback in a retrieving stake. Basically, she ran well, and the judges “called back” five dogs to do a retrieve setup to see who would qualify for a placement. A bird was planted and I got Zara on point. The bird flew off to the side and the gunner fired once, missed, and fired again. The bird went down on the second shot, a good distance from us. I sent Zara for the retrieve, thinking nothing of it. She ran right to the bird, picked it up, and brought it back to me. Afterwards, people told me how impressed they were with her ability to retrieve at that long distance and the fact that she marked it well. I was surprised, because that retrieve would have been totally normal at a NAVHDA training day or test. We earned second place.

From what I’ve seen, NAVHDA dogs mark well. “Marking” is the ability of a bird dog to follow the flight of the bird and remember where it went down so that they can easily find it when sent to retrieve. Since NAVHDA dogs spend so much time retrieving, they develop the ability to mark, both on land and in water. In the field trial retrieving stakes I’ve watched, it seems like non-NAVHDA dogs often don’t mark well. Either they’re not paying attention when the bird is shot, or they go past the bird or to the wrong area.

Again, a good retrieve is not everything in a field trial, but it could make the difference between earning a placement or not.

The gunners walk up to Zara on point at this year’s Vizsla Club of America National Gun Dog Championship. It was a retrieve on-course stake.

If you’re coming from NAVHDA, you’re most likely used to walking behind your dog while it is hunting. If you don’t have a background riding horses, that’s okay. As I wrote in my blog post about walking in horseback field trials, you can be successful by walking if you are in decent shape. You also may want to seek out walking-only stakes to start.

Participating in AKC Field Trials Can Benefit Your NAVHDA Training

Field trials have also helped my NAVHDA training. Now that I’m training for the NAVHDA Invitational, I’ve found that running field trials this past winter was beneficial. NAVHDA tests typically only happen once or twice a year, so it’s hard to get a lot of handling experience if you only own or run one dog. In contrast, depending where you live, there might be a field trial every weekend from October to March or even into June. I ran Zara in nine field trials last season and doing so made me a lot more confident handling her. I get nervous participating in most dog sports, but the more times I do it, the less anxious I feel.

You also encounter a lot of different scenarios that don’t come up in training and as a handler, you’re forced to make decisions in the moment. Sometimes you make the wrong decision and it will cost you the run. That happened to me several times this year. However, all of those instances were good learning experiences and have made me a better handler.

If you are going to participate in both NAVHDA and AKC field trials, I would recommend leaving some time between the two, especially if you handle differently in each event. For example, in a field trial, I use a whistle with Zara because I want her to run out, stay ahead of me, and not constantly check back. In a NAVHDA test, I don’t use a whistle and it doesn’t matter to me as much what her running pattern is. Another difference is the way that you move your dog on after a bird flushes. In a field trial, I grab Zara’s collar and walk her away from an unshot bird. For the NAVHDA Invitational, I will heel her off-leash away from the bird. After field trial season ended in March, I changed my training from collaring her away to birds to heeling so she wouldn’t get confused. I won’t collar her off any birds until after the Invitational is over.

Have you transitioned from NAVHDA to field trials? Did you find that NAVHDA training helped your dog? Let me know if the comments below!