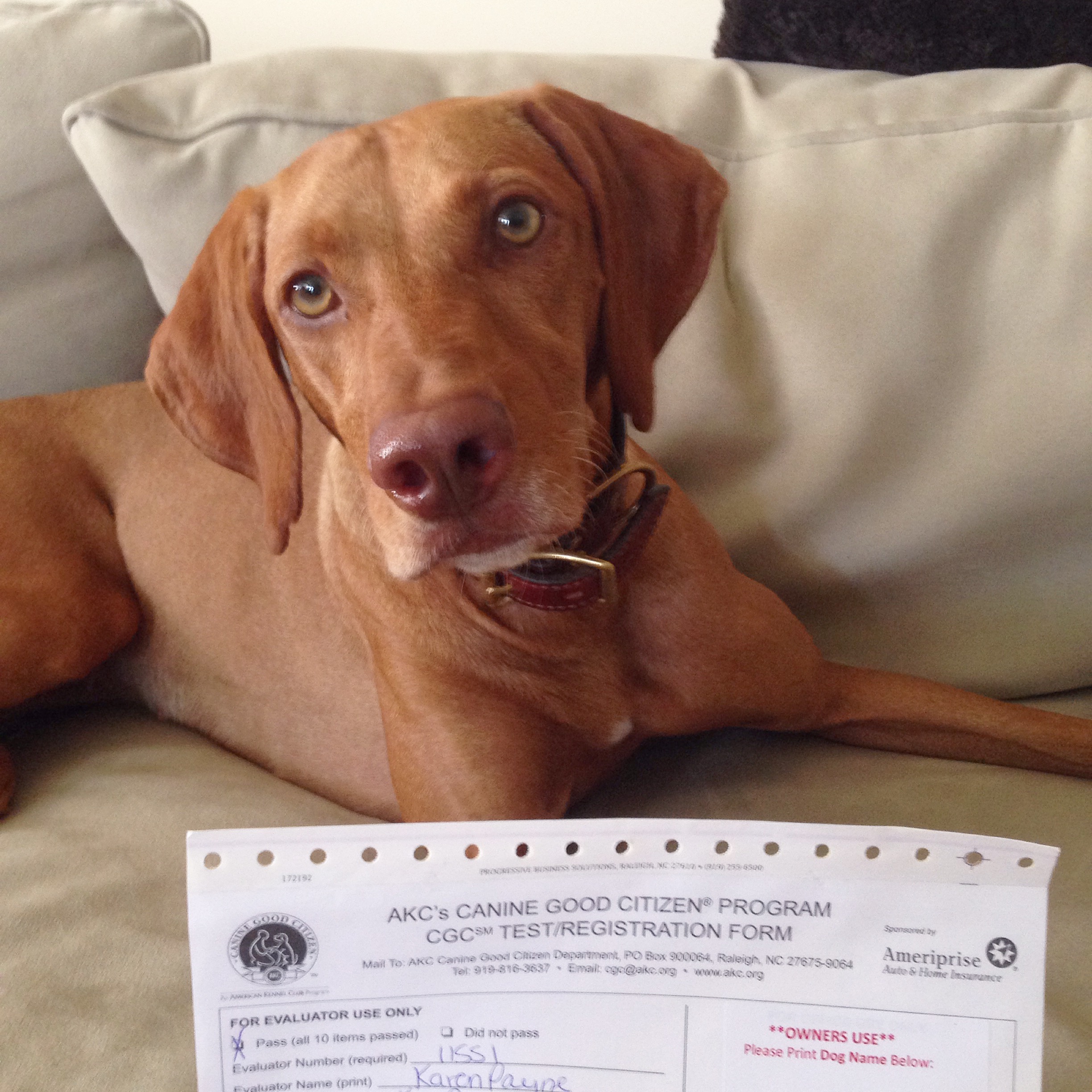 On August 6th, Zara finally earned her AKC Canine Good Citizen title! This was our third attempt taking the Canine Good Citizen test. We tried it first last January and then again in July. Both times she passed everything except the supervised separation. I was trying to avoid taking a class last year and I think we would have been fine if we’d practiced the separation more. But this time, I felt like she was more ready and really earned it.

Preparing for the Test

We took Public Manners in preparation for the test and although the first couple classes were challenging, I learned a lot and it was a great experience teaching Zara how to listen and behave better outside and without treats. We practiced the supervised separation a few times in class and she did fine.

The test was actually held OUTSIDE, at Lake Benson Park in Garner, NC. It was originally going to be held inside at a pet store but they changed the location at the last minute. This really annoyed me, because I feel like there’s a huge difference between an inside room with minimal distractions and outside at a park in the woods where squirrels are climbing trees and dragonflies are cruising by! Zara is MUCH more attentive to me when we’re inside anywhere. Outside is a different story because there are so many other things to see and smell. I realize that an CGC-certified dog should be able to behave well inside or out, but I think the test requirements should be changed to require either an inside or outside location.

Anyway, the morning of the test, I got to the park a little early because I wanted to walk her around so she’d calm down a bit beforehand. She’s always energetic when we go to new places. We’d already been to the dog park earlier to get the crazy energy out.

We walked around and I had her practice sitting, staying, and down. However, she would not go into a down position. Zara has always been very particular about where she will lay down. The surface matters. If it’s a carpeted floor, she will lay down anytime. A hard floor or concrete is usually a no-go unless I have a towel or blanket to put down. It may have to do with the fact that she has very little fur and fat so a hard surface isn’t comfortable. She’s also a bit of a princess. I’d been bringing a towel to our Public Manners classes for her to practice down on. Our instructor said I could bring it to the CGC test, which I did.

The morning of the test, I was walking around the park with the towel trying to get her to lay down. I even had treats and she wouldn’t! She was distracted by all the new sights (even though we’d been there before) and just not listening to me.

At that point, I really wasn’t sure that she was going to pass because they have to lay down on command. I was annoyed because I knew she’d do it if we were inside.

However, once the test began, her listening skills seemed to reactivate! She laid down without a problem! Even the loose-leash walking was good – we walked around an area with wooden benches and she was walking nicely, sniffing the ground. We had to repeat two things twice, which they allow you to do. After putting your dog in a sit/stay, you walk about 20 feet from them and call “come!” When I did this, Zara came to me but she did a bit of a drive-by so they asked us to repeat it. The second time, I knelt down and extended my arms out wide to encourage her to come between them. She did!

She also jumped up once in the beginning because the evaluator was holding her brush. (Zara likes to sniff things that people are holding). I put her back into a sit and told her to stay while I greeted the evaluator. She kept her butt on the ground the second time.

And then she had no problem with the separation – they led her away on a leash which I think worked out better than her staying in one place and me leaving.

I was very happy that we passed the test (especially in a more challenging outdoor environment!) because now we can move on to therapy dog training, which I’ve been wanting to do for two years. We’ll be taking a Pet Therapy class starting in September. After that, she will still need to get certified by an accredited therapy program, but we’re on our way. 😊