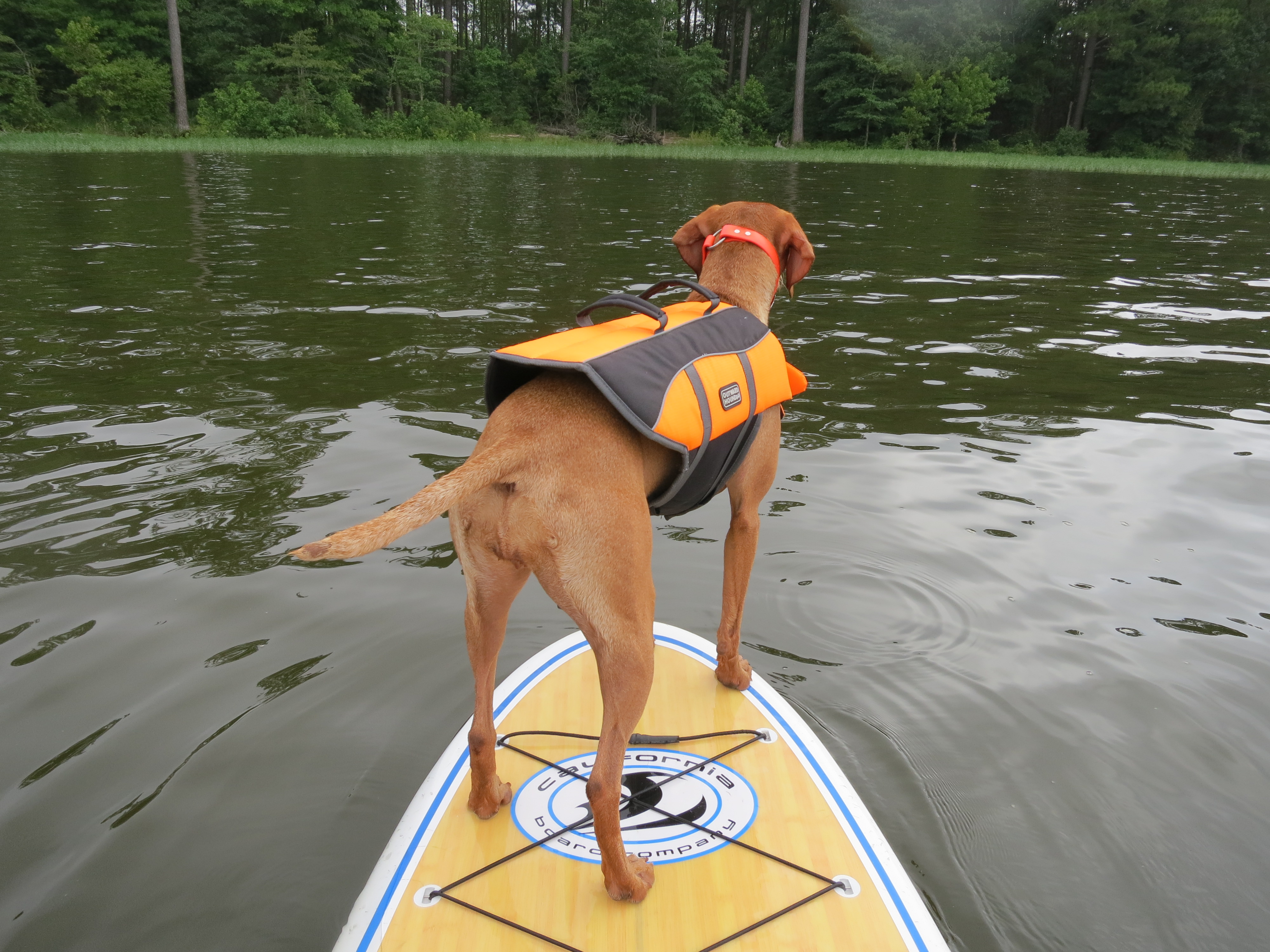 When Chris and I first started talking about getting a dog, we knew we wanted one that was athletic and could run with us. After owning her for close to three years, I have realized that having an athletic dog is somewhat different from having an ordinary dog.

Their Athletic Feats Will Never Cease to Amaze

We originally found out about the vizsla breed during the summer of 2013, when our friends visited our apartment after they had just been at the dog park with their dog. They told us enthusiastically about a dog they had seen leaping over a fence (the dog park they were at has fences about four feet high). Incredulous, they asked the owner what kind of dog it was. A vizsla, he said. That story pretty much sums up our life with Zara. She’s never leapt a four foot fence (though she did scale a three foot fence so effortlessly from a standstill that I’m confident she could get over a four foot one) but the athleticism she displays on a daily basis does attract a lot of attention.

Since we are with her every day, we sometimes forget how fast she is or that most other dogs aren’t at the same level. Zara typically has two speeds: off/resting and on/100% effort. She doesn’t do slow or medium very well. When I throw a ball for her at the dog park, she hurtles after it like there’s no tomorrow. It’s not uncommon for me to hear people whispering to each other, “Man, that dog is fast!”

Before we bought a Chuck-It, Zara became obsessed with them and would always try to jump up and get the Chuck-It/ball from whichever unlucky person had one at the dog park. In response, people would usually move the Chuck-It higher and teasingly say, “Oh, no, you can’t have it!” They were always shocked to see Zara continue to jump higher and higher as they moved the Chuck-It into the air above their shoulders. 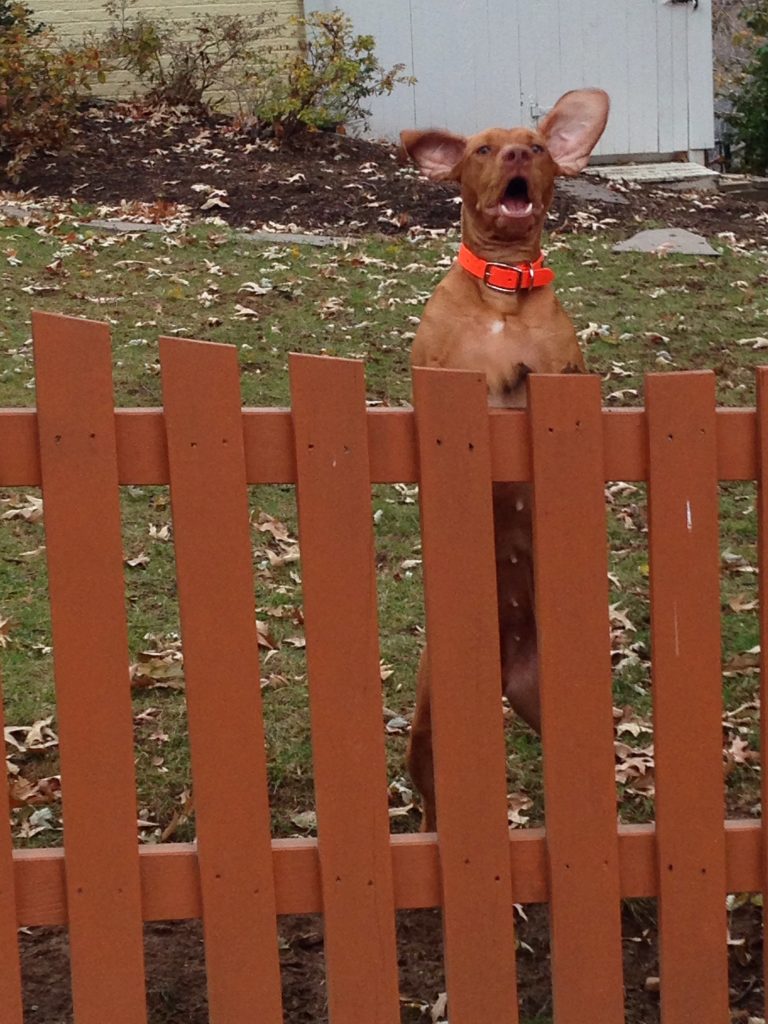 The fence that Zara jumped over.

They Need A LOT of Exercise

Needless to say, an athletic dog needs daily exercise. At a minimum, Zara gets two dedicated exercise sessions of 30 mins to an hour or more per day – one in the morning and one in the evening. This consists of running and chasing at the dog park, running on leash with us, an off-leash hike, a play date with another dog, or a walk (the least desirable option). Sometimes we can get away with not exercising her in the morning or evening if she’s been out with us for most of the day, or we’ve had visitors over and people were playing with her or the weather is really bad, but she can’t go more than a day or so without some good running. If you’re thinking of getting an athletic dog, make sure that you can handle the time commitment!

Mental “exercise” is also important and I try to do training frequently with her. Sometimes this wears her out more than a run or a walk.

The good thing is that an athletic dog will be able to handle almost any challenge you throw at them. 5 mile run? No problem! 10 mile hike? No problem! Stand up paddle boarding as they swim alongside your board for a surprisingly long time? They can do it all. 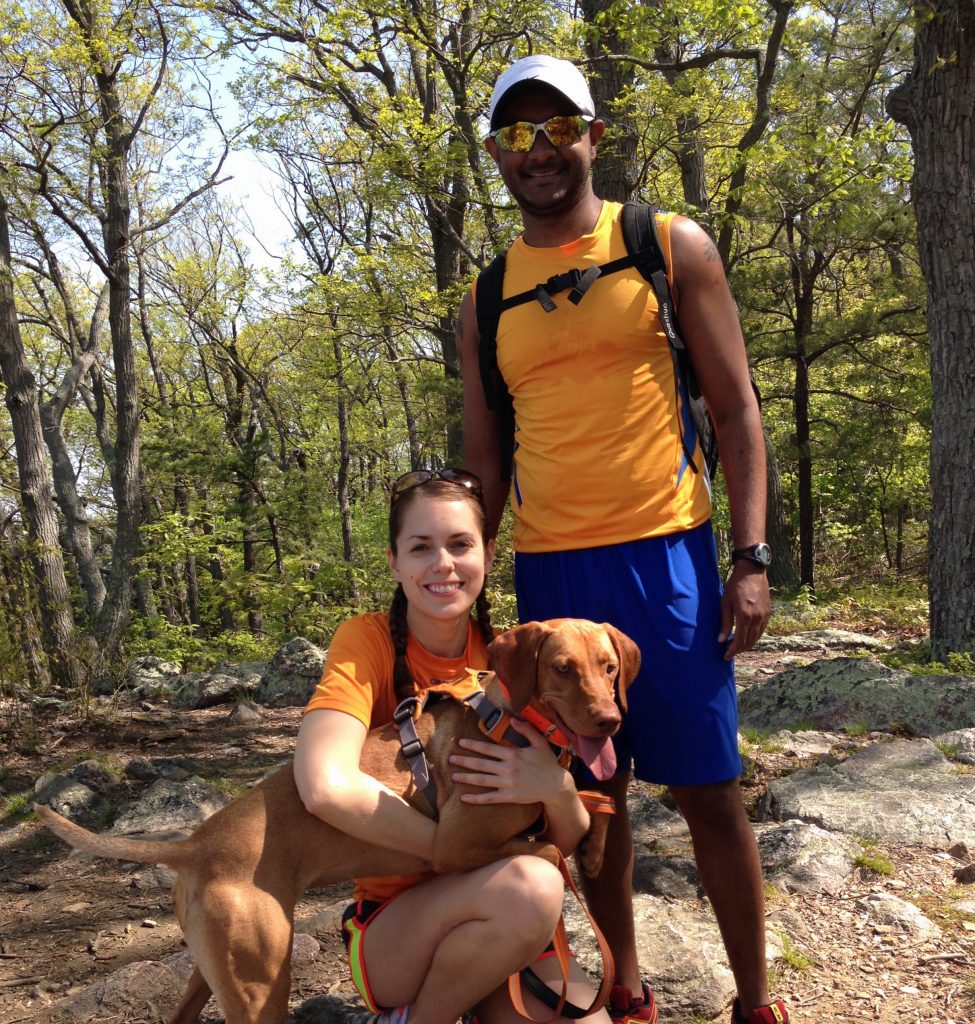 A family picture on one of our many hikes.

As mentioned above, an athletic dog can run for miles and miles and thus can be a great running companion. Zara definitely is. This was certainly one of the main reasons we wanted a vizsla. However, I don’t think we will ever be able to run enough for her. Before we got her, I think we assumed that our runs would be enough to tire her out and she wouldn’t need a lot of other exercise. That is definitely not the case.

We’ve also realized that her ideal running speed is much faster than we usually go. I typically run anywhere from an 8 minute to 9:30 minute mile pace. But Zara is more comfortable going closer to a 7:30 minute pace, which Chris does occasionally. This is an actual run for her, whereas a slower pace is more of a fast walk. I’m working on getting faster but I don’t know if I will ever be fast enough for Zara.

We have friends who have a vizsla and when she was younger, they were running a lot with her. But eventually it got to the point that she became so fit that the runs didn’t really tire her out. They’d do six miles and then she’d be ready for round two! 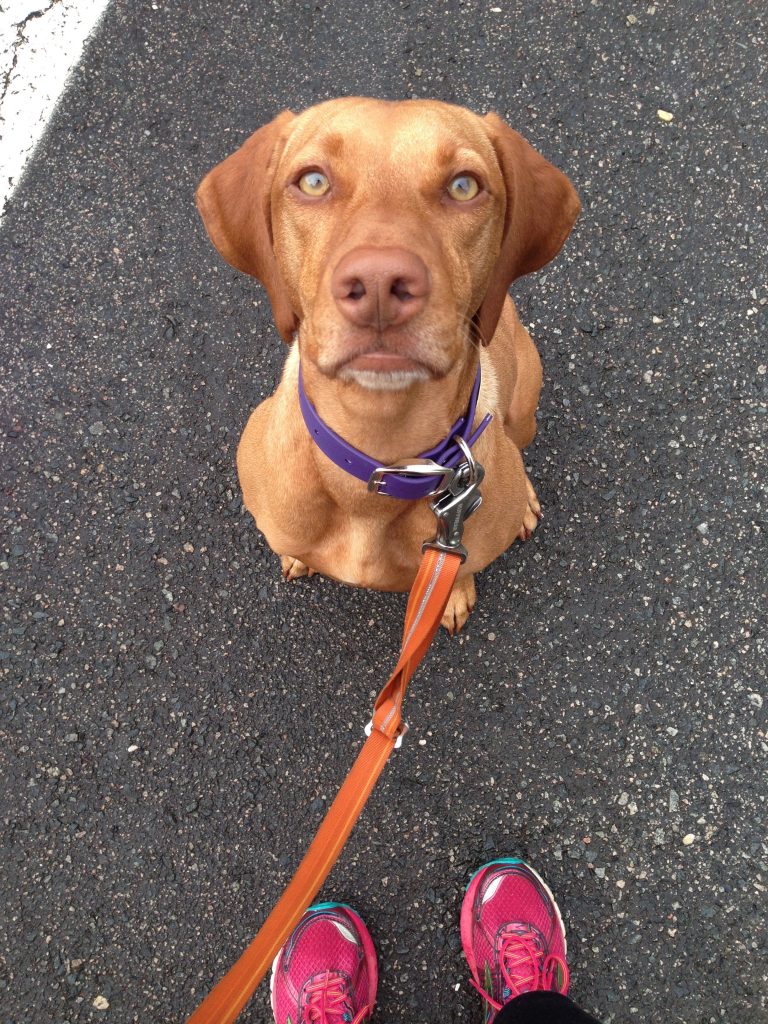 Why cant you run as fast as me? -Zara

Like all dogs, canine athletes need to eat a nutritious diet. We now feed Zara a prey model raw diet although we had her on a high-quality kibble before that. Making sure she gets enough to eat is also important. Because of her excess activity and likely high metabolism, I have to feed her way above the recommended servings to make sure she maintains her weight. When we were feeding the Nature’s Logic raw patties, the recommended serving per day for her weight was 2 patties. I was feeding her 5 a day!

She loses weight easily, so we often feed her a little extra or a snack on a day when she’s done a lot of exercise. 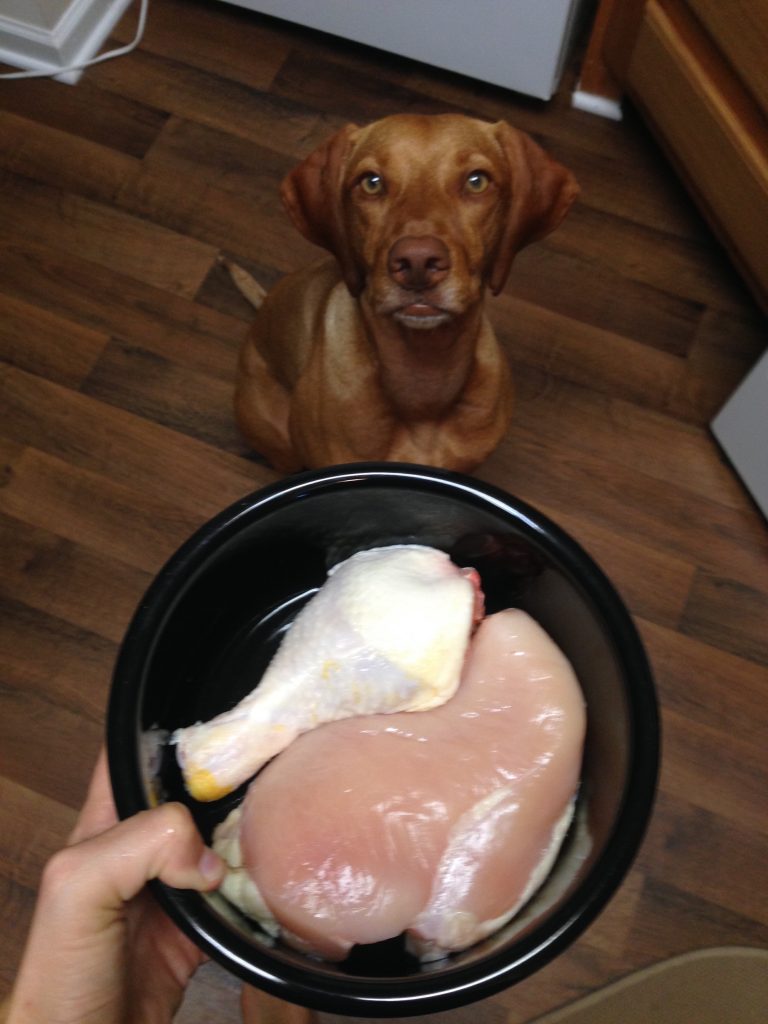 They Get Special Attention at the Vet

It seems like the majority of dogs that vets see nowadays are not very athletic and if anything, need to lose a few pounds. Because of this, the vets always seem surprised by Zara’s sleek figure and remark that she must get a lot of exercise (my thought process: do you know what a vizsla is like?!). A few months ago, we were told that Zara needed to gain a few pounds, which I already knew. I’m guessing they’re telling most of their other clients the opposite.

One thing to also be aware of is that an athletic dog might have a heart rate that is lower than normal. Like humans, exercising a lot gives them a lower resting heart rate. Again, the vets always comment on this during check-ups, so it’s good to know if your dog has a low heart rate so you can reassure them that it’s normal. (A dog can also have a low heart rate for other reasons, so it’s best to make sure it’s not caused by a medical condition). 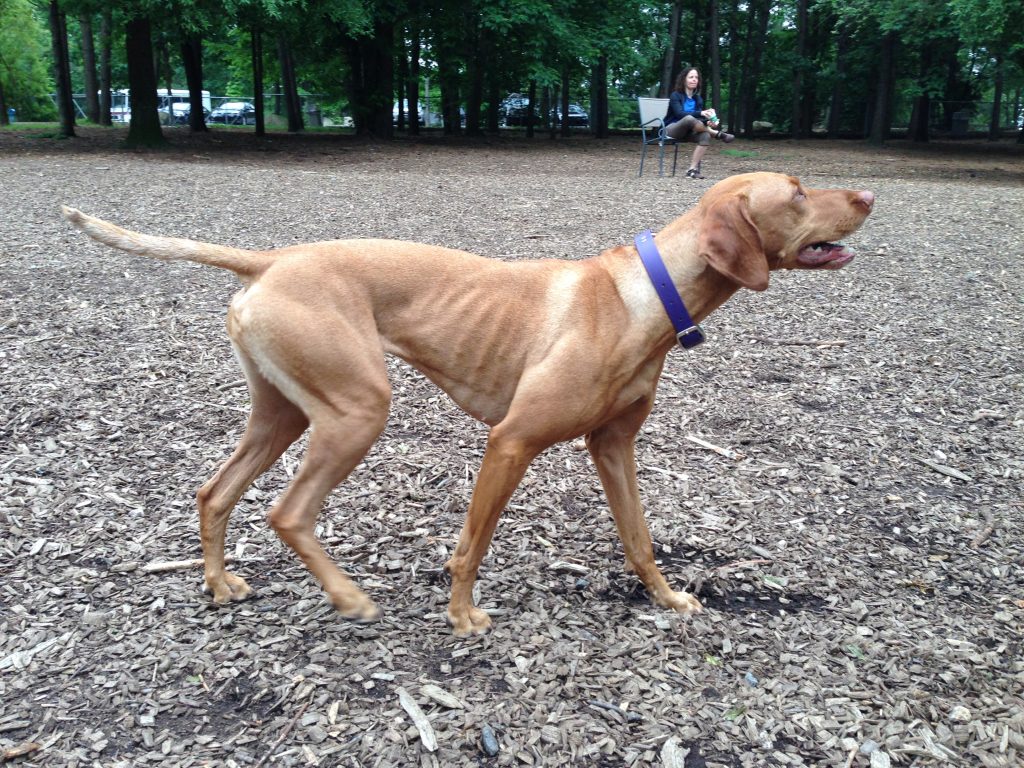 Back when Zara was super skinny! Thankfully, she has been maintaining a good weight for a couple of months now.

I think owning an athletic dog is a joy. I love to watch Zara running as fast as she can, chasing another dog or hunting birds. She looks beautiful and you know that she is having the time of her life. I also appreciate that she is up for any outdoor activity whenever I am. Having an athletic dog can be a lot of work, but it’s a lot of fun too!