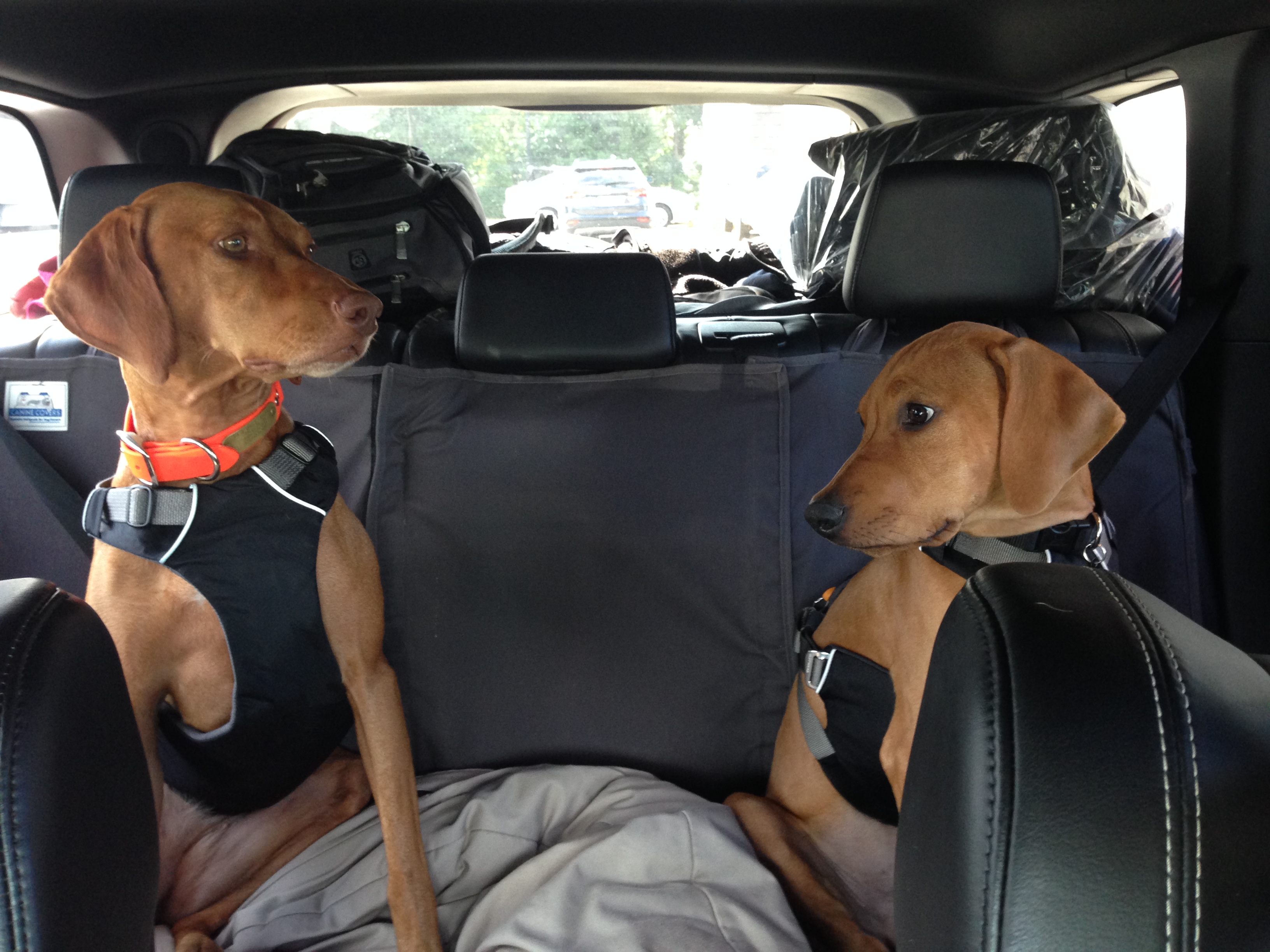 Last August, Chris and I took an 11-day road trip to Maine from North Carolina. We had been planning this trip for over a year and always intended to take Zara with us because Maine is a very dog-friendly state. Initially we did not intend to take Colombo with us, because I thought that taking a 4-month-old puppy on long car rides, in hotels, and everywhere else we were planning to go was a recipe for disaster. But, after thinking through it, we decided that taking him was the best option. We had only had him for six weeks, so we didn’t think leaving him for 2 weeks would be great for his training or bonding experience with us.

Traveling with dogs requires a little more coordination than just with people, so we did a lot of research beforehand on the places we could go with them and booked all of our accommodations ahead of time. We stopped and visited several friends and family members along the way and our main destinations were Kennebunkport, Portland, Freeport, and Bar Harbor, Maine. I had been to Maine twice as a kid but Chris had never been. I actually really disliked going to Maine when I was younger because it was cold in the summer! I did not like being cold when it was supposed to be warm. But as an adult, I was really looking forward to the trip.

We had a couple of long days in the car getting to Maine and encountered a fair amount of traffic on 95. Thankfully, both dogs were good in the car, although there were times I had to sit in the back seat with Colombo and periodically dole out treats to him or give him something to chew on. We bought seatbelt harnesses for them to wear since we were going to be on the road so much. The ones we got are from Ruffwear. I like them, although they are only crash-tested and completely safe for dogs up to 65 lbs. Now that Colombo is larger, we have a Sleepypod car harness for him.

We stayed in a campground in Kennebunkport. I was a little worried how the dogs would do in a tent with all of the outside noises, but both slept great! The only issue was when they got the zoomies and tried to start wrestling inside the tent. I’m sure it looked like a wild animal had gotten in the tent to the people outside!

Having a high-energy vizsla and a wild puppy, I was careful to make sure that our schedule allowed for off-leash playtime each day. Some days it was the yard of the person’s house we were staying at, other times it was a dog beach, a park with off-leash hiking trails, or the campground dog park (yes, I found the campgrounds with dog parks!). Making sure they got their exercise (and not just on a leash) was important to having them be well-behaved the rest of the time.

Kennebunkport had a beautiful beach that allowed dogs off-leash in the evening. We went there both nights and Zara and Colombo loved it. We really liked the town of Kennebunkport. We met lots of friendly people and and it had a nice laidback vibe.

The second day we were there we went to the Seashore Trolley Museum, mainly because it was dog-friendly. They had lots of old streetcars and trolleys from all over the country on their property. Dogs were allowed inside the museum and even on the trolley! We rode in a trolley from 1912. Both dogs were a little freaked out by the experience, but luckily the ride wasn’t too long.

After Kennebunkport, we headed to Portland and stayed in a hotel. My friend from college, Rob, lives in Portland and we had fun catching up and eating at some great restaurants around the city. One afternoon, we walked around downtown Portland with both dogs in tow and we literally were getting stopped every 5 minutes by people wanting to say hi to the dogs. I think we attracted a lot of attention because they were both about the same size then, but looked a little different, so people wanted to know if they were related, or both Ridgebacks, or both vizslas… It was definitely good socialization for Colombo. 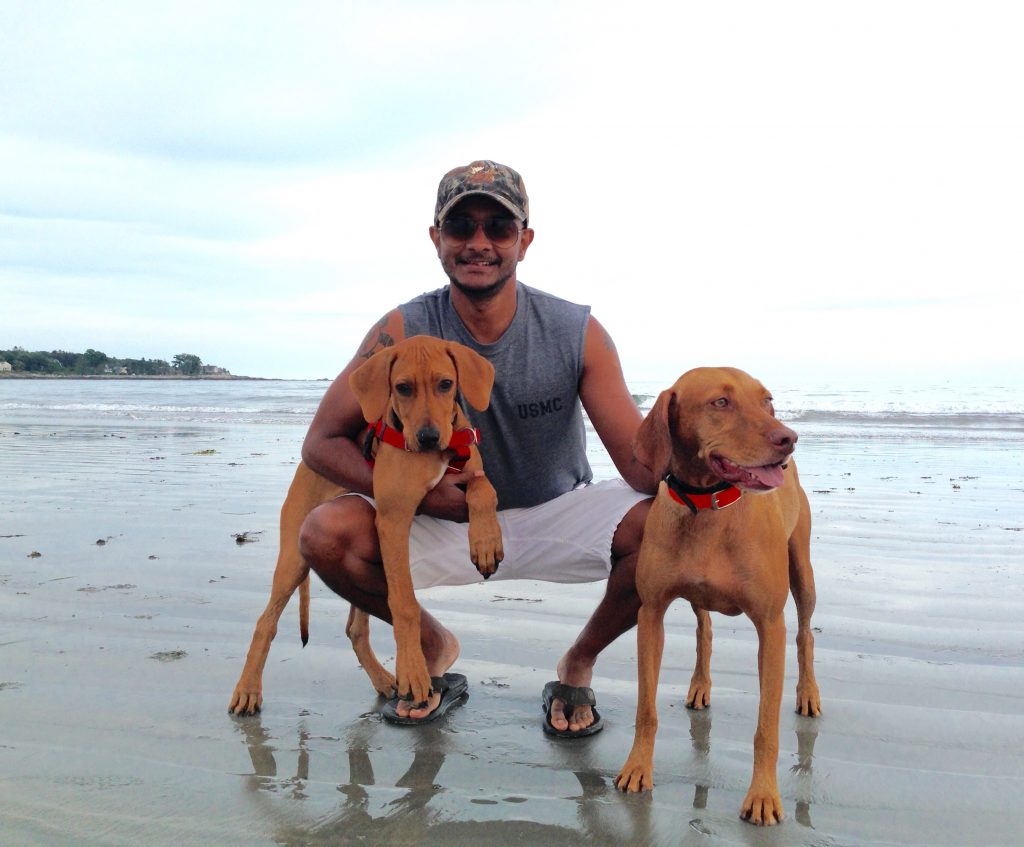 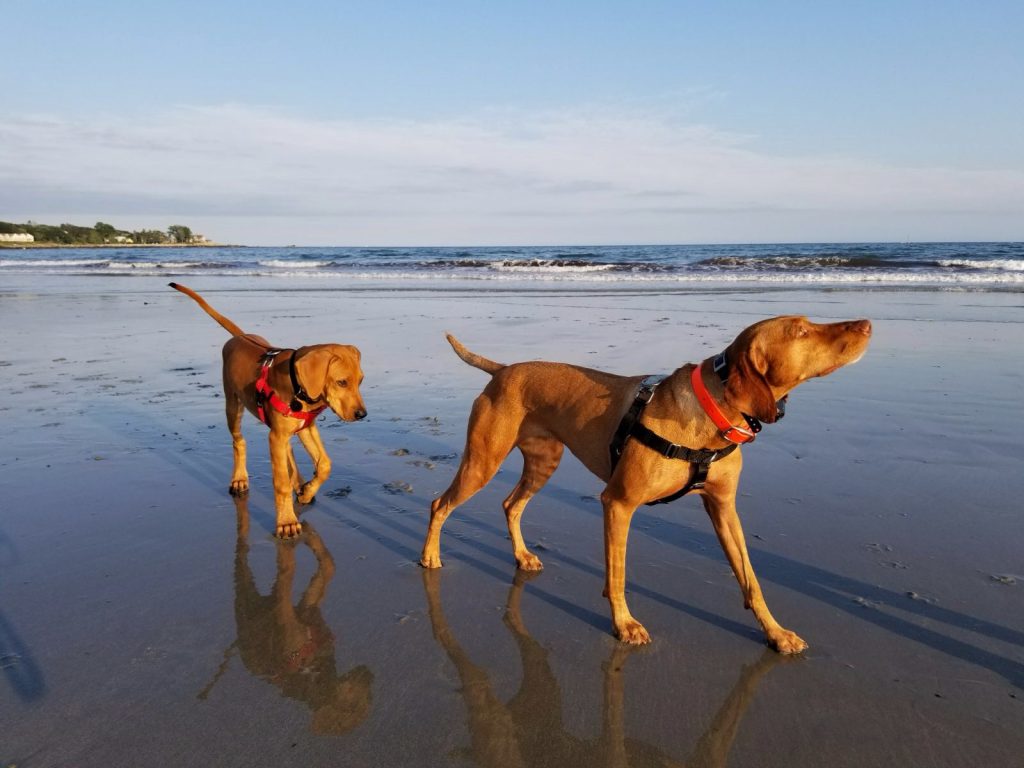 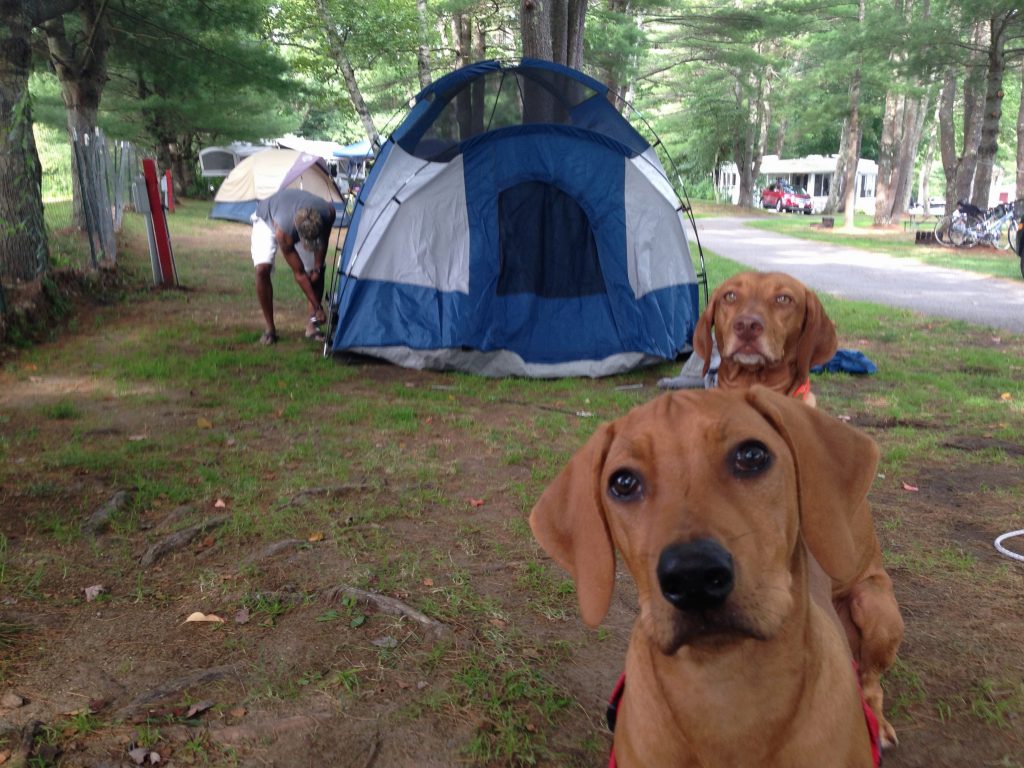 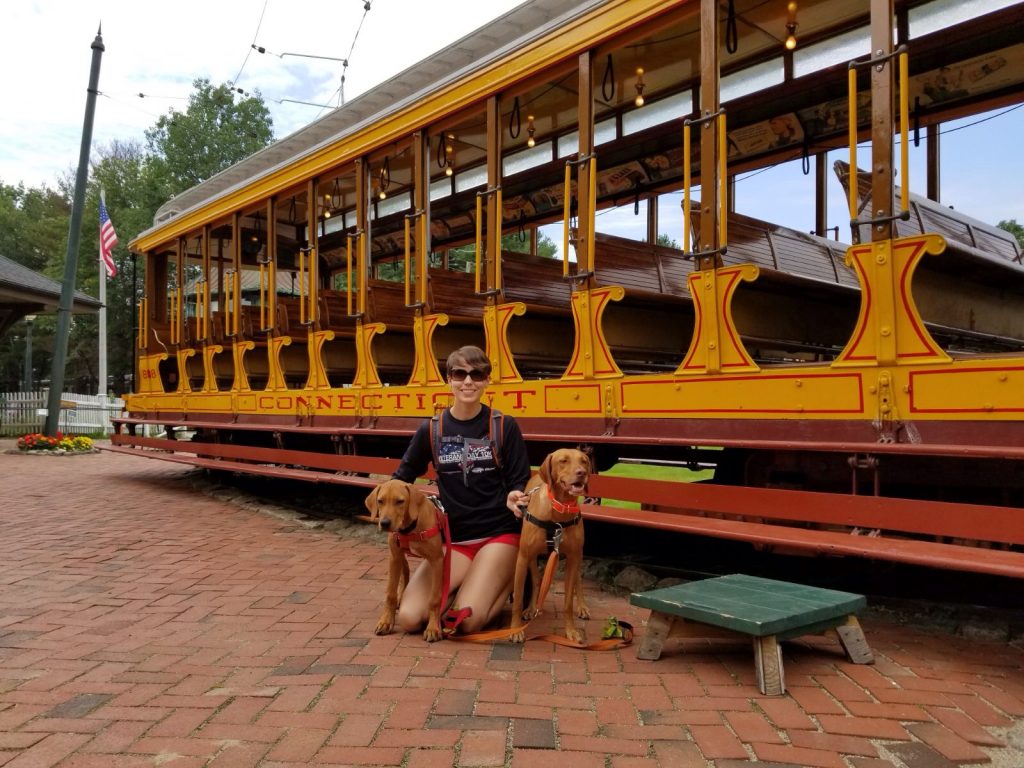 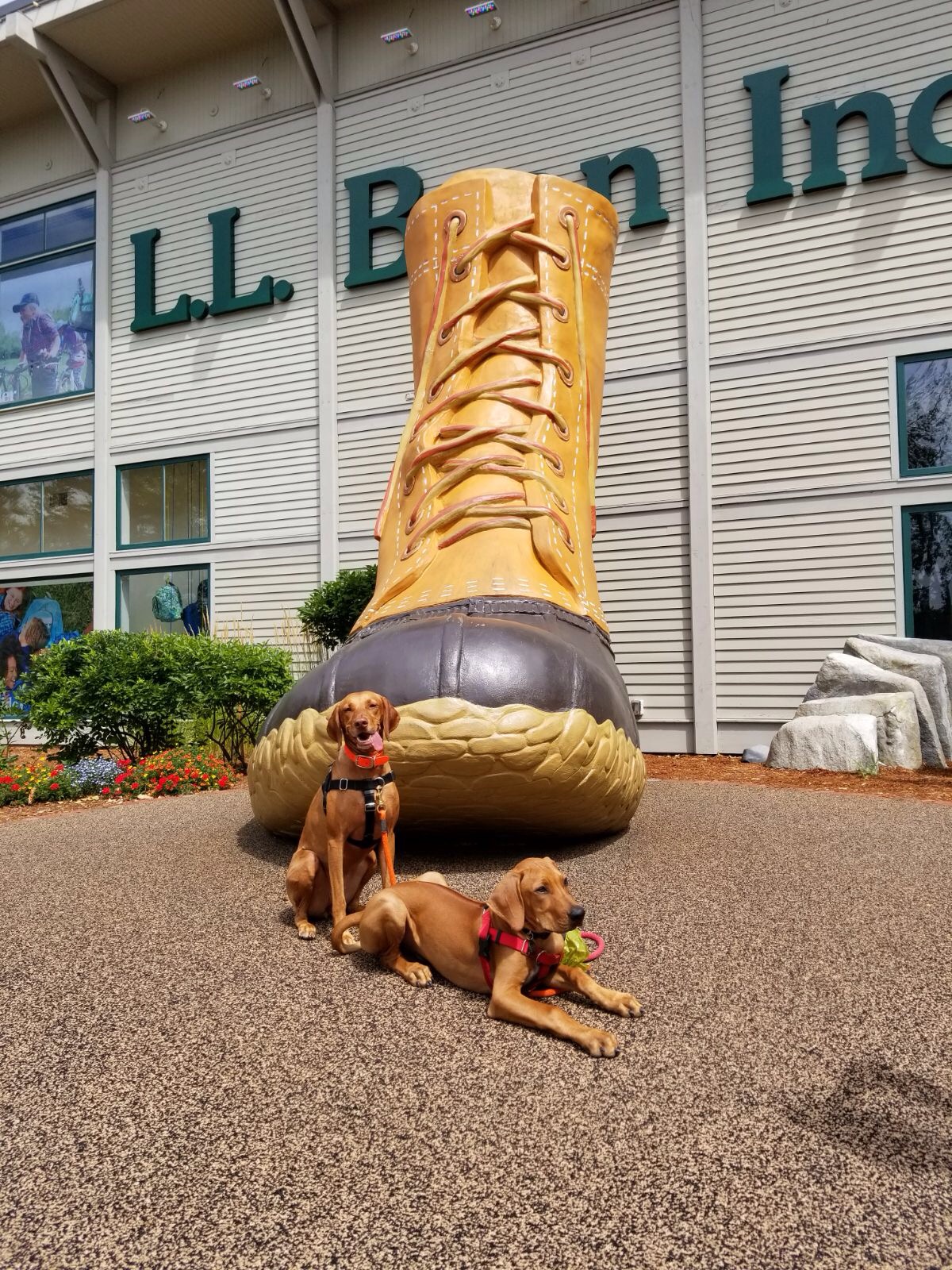 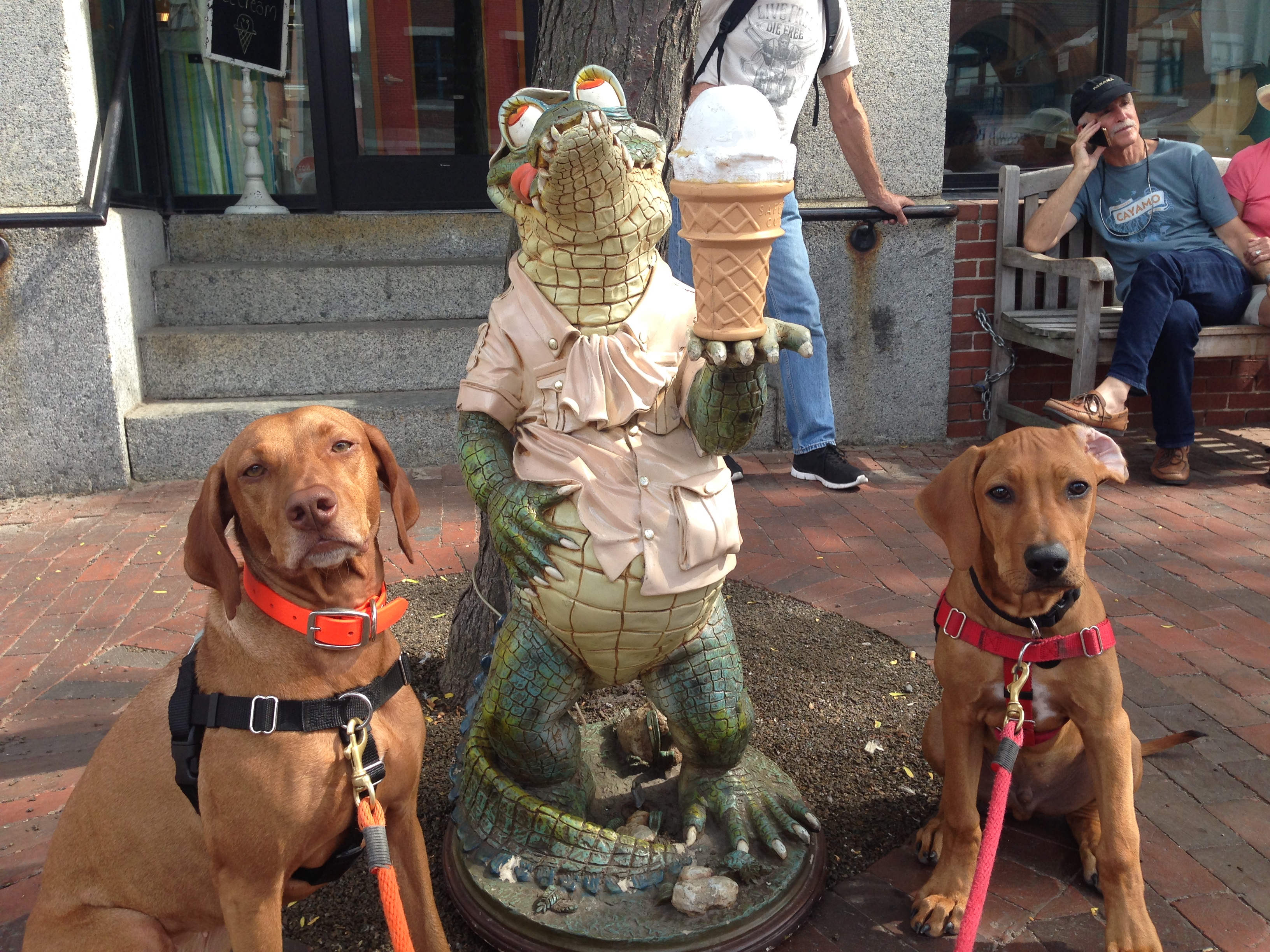 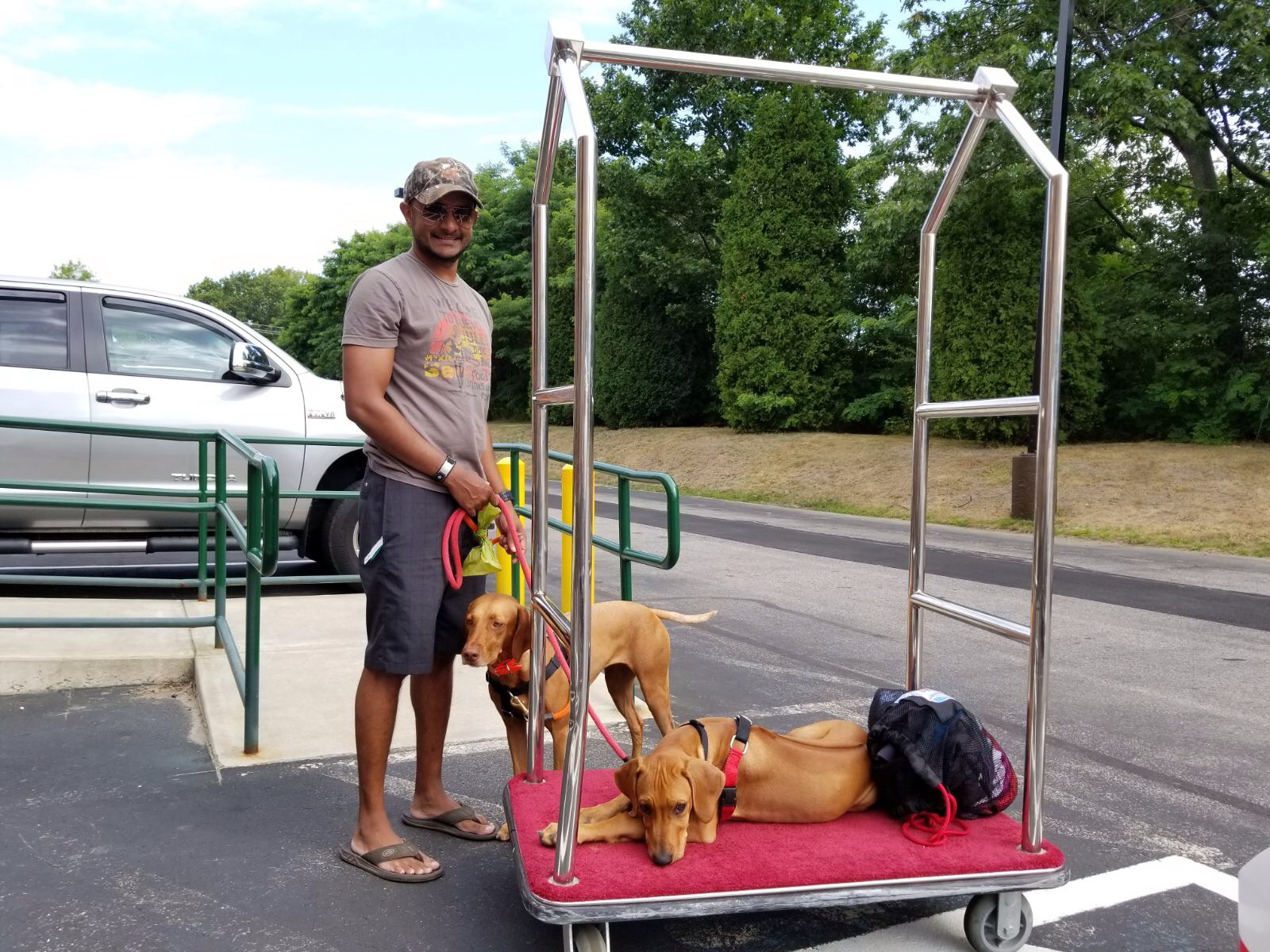 After Portland, we stopped in Freeport to go to L.L.Bean (unfortunately dogs are not allowed inside the store but they can walk around the campus) and the dog-friendly North Face outlet. Then we headed to our final stop in Maine – Bar Harbor/Mt. Desert Island. It was beautiful on the island and we had great weather. We stayed at another campground and did some sight-seeing during the day. We went to the top of Cadillac Mountain and took the dogs to Little Long Pond, which is owned by the Rockefeller family and allows dogs off-leash.

We had a great trip and both Zara and Colombo behaved well and took in all the new sights in stride. I would definitely recommend visiting this part of Maine if you have a chance and consider bringing your dog! 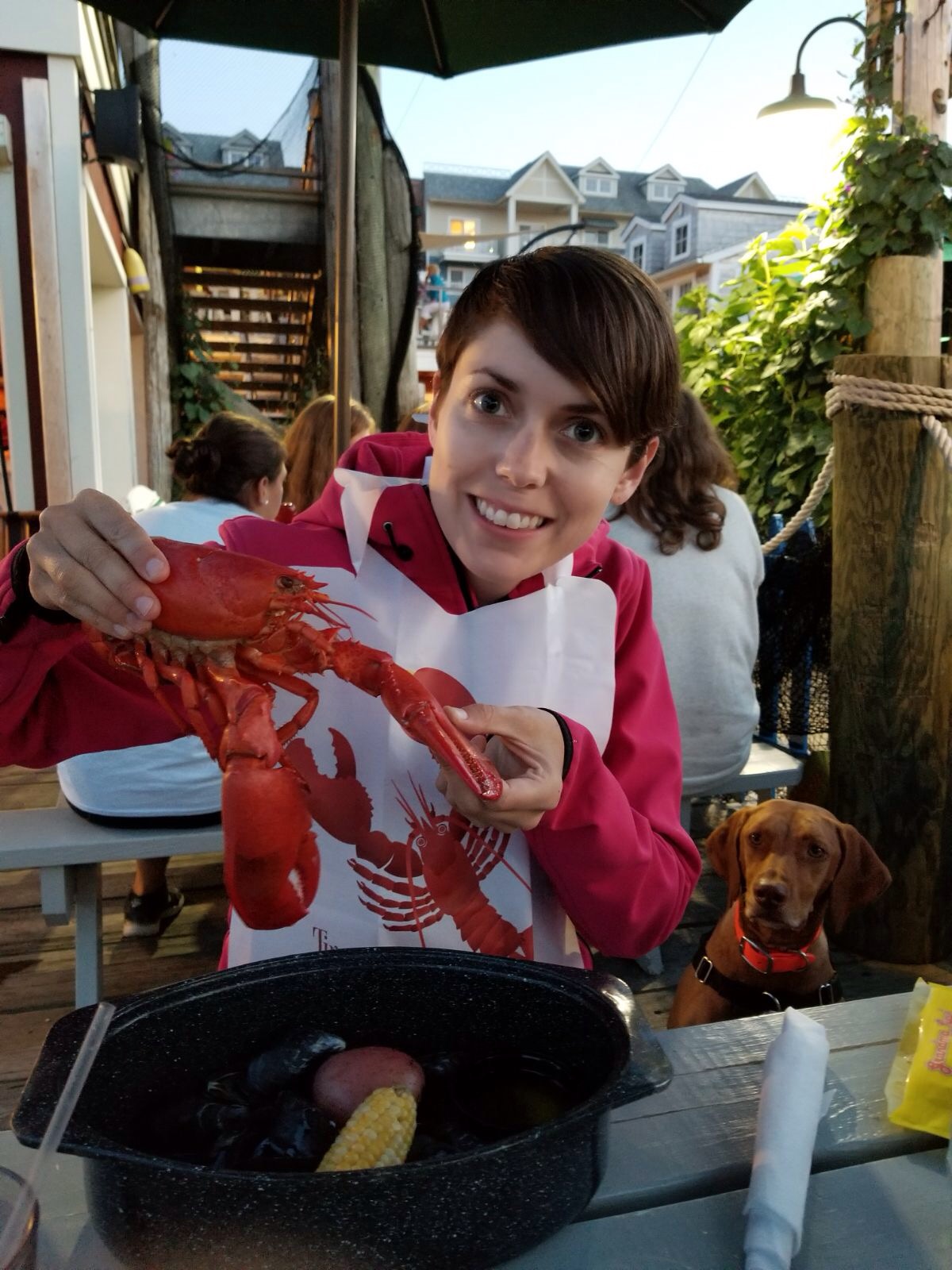