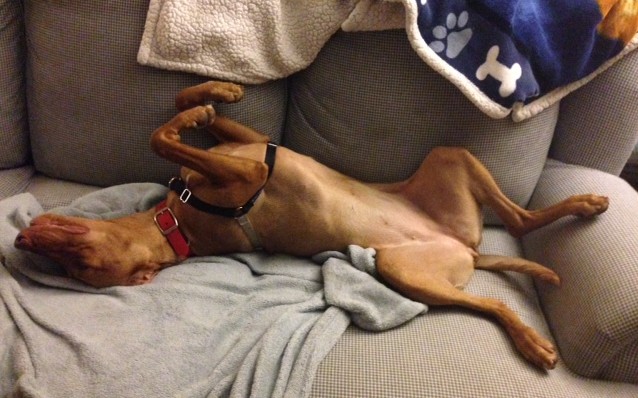 Last week, Chris and I went on vacation to Copenhagen, Denmark. When I was in college, I spent a semester studying abroad there, from January to May 2006. I lived with a host family during my time there and we’ve kept in touch since then. As you can imagine, the winters in Denmark are quite cold and since I was there during the winter, I have always wanted to go back in the summer, so I could experience the country more fully. Chris and I were in Denmark for a week and we stayed with my host family for three days. It was really nice to catch up with them and see the city again. We also traveled to Bornholm, a small Danish island in the eastern part of the Baltic Sea, with beautiful beaches and historic small towns. It was an enjoyable vacation but we wouldn’t have enjoyed it as much if we hadn’t known that Zara was in such good hands while we were away.

Our friends Erin and Dave and their dog Jax watched Zara while we were in Denmark. Zara loves Jax and I don’t think she missed us at all while we were away. According to Erin and Dave, they played for hours on end, chasing, wrestling, and mouthing each other. Zara also got to experience her first fireworks over the Fourth of July and they said she wasn’t scared at all. When we picked her up a week later, Jax was tired from so many days of playing but Zara still had energy to spare. ;)

We are staying local for the remainder of the summer until the last week in August when we are going to the Outer Banks in North Carolina. We have rented a house for week (also with Erin and Dave) and the dogs are of course coming as well. I’m excited to see how Zara will take to the ocean. We are staying in Duck, and their beach rules allow dogs on the beach unleashed at any time of day. :)

Hello peeps. Today Mommy and I went on a girls’

At the hunt test on Saturday, I had a flashback to

Well, unfortunately Zara did not earn another Mast

It’s sometimes hard to see your dog when she’s

#sorrynotsorry about all the photos I’m gonna po