Why I Don’t Use Lawn Chemicals

A few years ago, a young dog I followed on Instagram developed cancer. Curious, I looked up what typically causes cancer in dogs, expecting things like diet, genetics, and obesity to be at the top of the list. I was surprised to find an article that listed none of these things. The top five causes of cancer were listed as:

Given that this was four years ago, I can’t locate the exact article I found. But there are similar ones that name these items too. I was surprised that chemicals seemed to play such an important part. There are likely multiple causes of cancer and in some cases I’m sure genetics, diet, and weight do play a factor. But reading this really opened to my eyes to the fact that I should be careful about what chemicals my dogs are exposed to.

Over the past few years, I’ve become much more focused on keeping Zara and Colombo as healthy as possible. When Zara was young, we followed the recommendations of the vet and followed a fairly normal vaccination schedule. Per the recommendation of her breeder, I have always spaced out vaccines and refused to give more than one vaccination per day. I do this in case of a reaction – that way I will know which vaccine caused the problem.

Once a dog reaches adulthood, a combination vaccine that includes distemper and parvovirus is usually given once a year or every three years. Traditional veterinarians will recommend this vaccine without second thoughts. But studies have be done which show that a dog is often protected from the disease for more than a year or three years. That’s why I’ve started to do titer tests for my dogs for these core vaccines instead of automatically re-vaccinating them. If they still have a protective level of the vaccine in their bodies, I won’t vaccinate them that year. Yes, a titer test costs money and not all vets do them, but I think it’s worth checking for their long-term health. Plus, if they end up not needing the vaccine, you will save money on that. 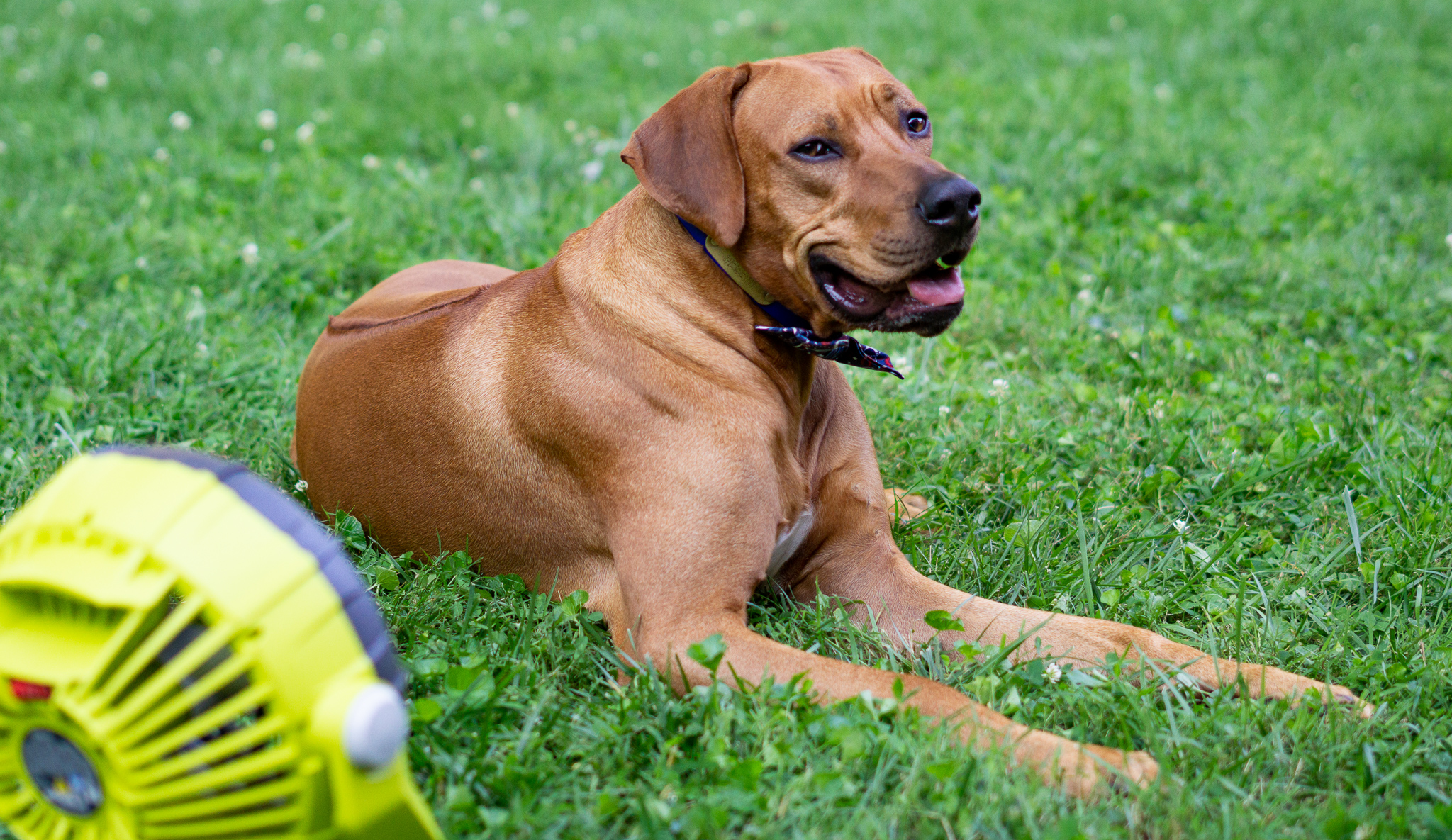 Colombo tries to cool off in the grass.

Preventing cancer and other issues is also why I refuse to use pesticides or herbicides on our lawn. The Tufts University School of Veterinary Medicine did a study and found that use of lawn chemicals was associated with a 70% higher risk of lymphoma in dogs. Seventy percent! My dogs are in the grass every day, multiple times a day. It makes sense that a chemical could get on their paws and once they lick it, it could be absorbed into their bodies. While our grass is full of weeds, I don’t mind because I’d rather have healthy dogs than a perfect grassy lawn.

It can be hard to determine what are “safe” chemicals to have around dogs. When we first moved into our house, we discovered that the mosquitoes are really bad in the summer months. We looked into having a mosquito treatments company spray the yard every few weeks. They offered two options of sprays: an “all-natural” option and a “botanical” option. The all-natural option used peppermint oil, geranium oil, and rosemary oil which are known to be safe for pets. The botanical option, on the other hand, used a chemical that was known to cause cancer in lab mice. No thanks. But the company marketed both options as “safe” for pets. We tried the all-natural option for a month or two and unfortunately it did not work at all. But I was unwilling to switch to the cancer-causing botanical spray. 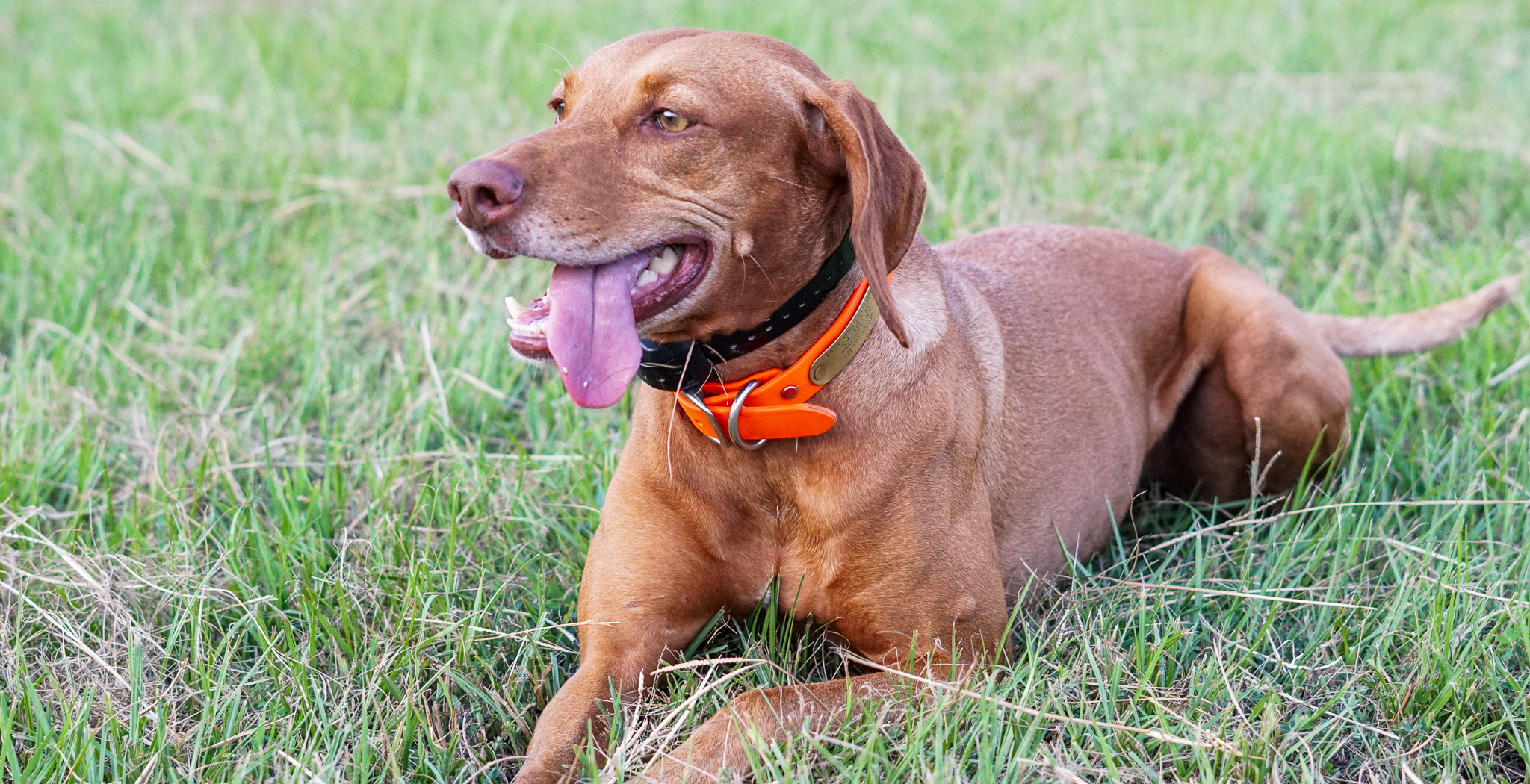 Both dogs love to lie in the grass, especially when it’s hot.

Preventing cancer is also why I’ve become very particular about using flea and tick preventative products on my dogs. For her first three years, Zara was on Parastar, a flea and tick topical whose main ingredient is fipronil (Fipronil is listed as a “possible human carcinogen” by the EPA and in studies on rats, caused thyroid tumors). She didn’t seem to suffer any negative effects and we never saw any fleas. She would still get ticks occasionally, but they were easy enough to pick off because of her short, light-colored hair. But after we got Colombo and doing more research, I became uncomfortable with using Parastar. I stopped using it and ordered an all-natural geranium oil-based topical for both of them.

Everything was fine for about a year, but then we had an issue with fleas the following summer. I’m not sure if Colombo picked them up at daycare or if they were just in the yard. Either way, I spent a few months vacuuming a lot, washing their bedding, and bathing them weekly. It was a major pain and I didn’t want to deal with any potential outbreaks, so I researched a less-potent flea medicine and decided on Advantage II, which prevents against fleas but not ticks. Its active ingredients are imidacloprid and pyriproxyfen. The EPA has not found evidence that these cause cancer in animal studies. I’ve been used Advantage II for the past two years and have not had any flea issues. I try to take a break from it during the coldest months – like January and February.

I think you have to consider your lifestyle, where you live, and your dogs’ physical characteristics when deciding on parasite prevention. Living in the South, fleas are more of a threat for us during the summer months, so I learned that it’s harder to go without any protection. However, we don’t have as many ticks here as for example, the Northeast. Also, my dogs have short brown coats, so I easily see ticks. Because of that, they’re not currently on any tick prevention. But if I lived in a tick-heavy locale or my dogs had dark hair or long hair, I would likely make a different decision.

Chris and I don’t smoke and thankfully, our dogs are hardly ever around cigarette smoke. As for household chemicals and cleaning products, I try to buy counter spray from Seventh Generation or a similar natural brand. We don’t use a lot of strong chemicals for cleaning, although I should probably take another look at the hardwood floor spray we occasionally use.

Minimize Chemicals as Much as Possible

In general, I think minimizing chemical use around your dogs as much as you can will help in the long run. As with most things involving dogs, there is no clear-cut answer. But there are steps you can take, whether that is by titer testing instead of automatically vaccinating or reducing or refusing to use unnecessary lawn chemicals. Our dogs are smaller and have shorter lifespans than us, so it makes sense that the effects of these substances are more pronounced in their bodies.

Have you had any issues using chemicals around your dogs? Leave me a comment below!