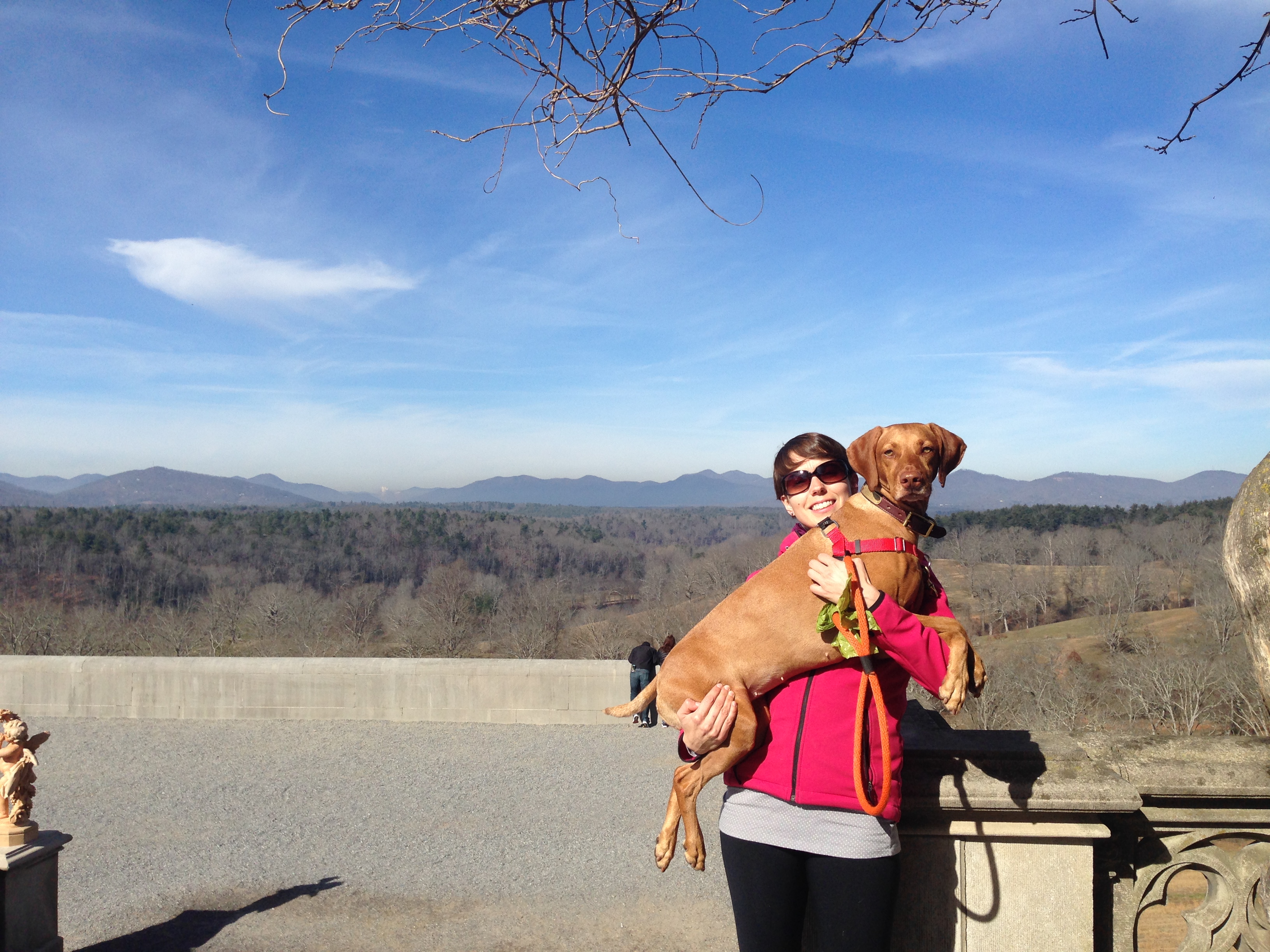 Two weekends ago we traveled to Asheville, North Carolina for a long weekend. Since Asheville is known to be dog-friendly, we brought Zara with us as well.

We left early Thursday morning around 6:30am and the drive only took us about 3.5 hours to get to downtown Asheville. We made a quick stop at the local pet store to pick up some frozen raw food for Zara and then headed about 45 minutes north. We stayed with a woman named Barb and her husband George. Chris and I both used to work with Barb at the job where we met and Barb recently joined Chris’ current company as well. They live in a brand new house in a gated community up in the mountains. Each house has one or more acres of land and is surrounded by nothing but forest and mountain views. You cannot see any signs of civilization from Barb’s house. It was beautiful! 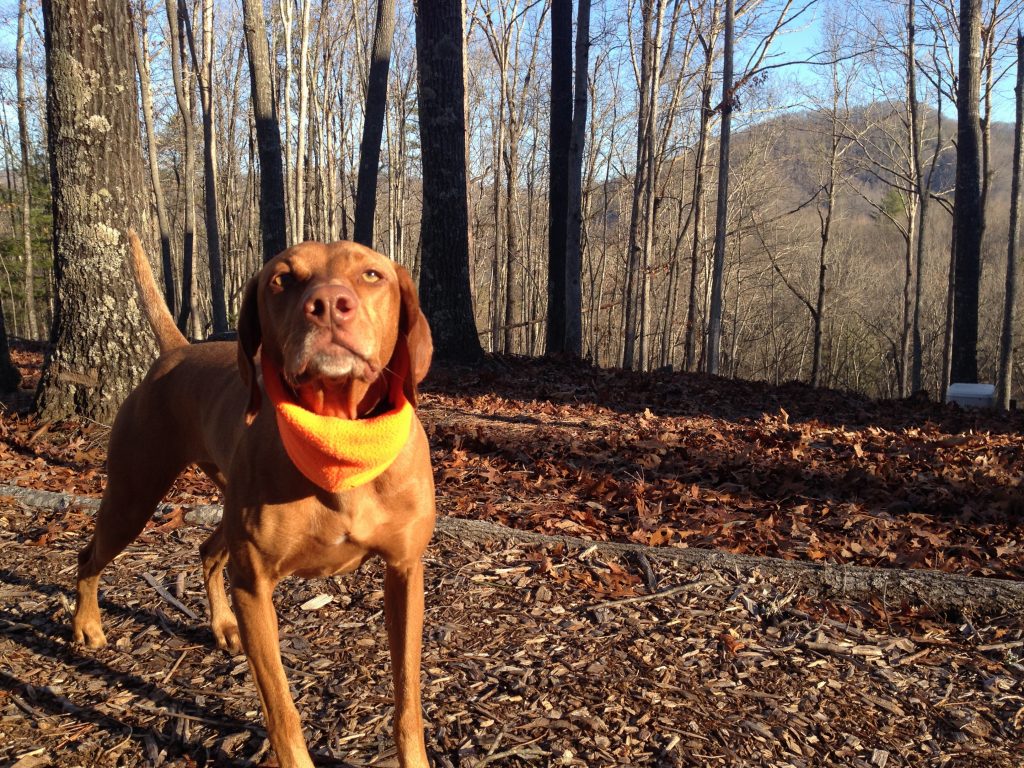 View of the mountain from Barb’s house.

She has a Yorkie named Emmitt and he and Zara got along well, although he has no where near Zara’s energy level. After working most of the day on Thursday, Barb and I took the dogs on a 4 mile hike around the private property surrounding her house. We walked on the hilly road down to the French Broad River, where the community has a private park. Needless to say, Zara was having the time of her life running free. On the way back up the mountain, Zara had gotten ahead of us. When we came around a corner, she was belly up on the ground, blissfully rolling in some animal poop! Unfortunately, it was fresh poop and it was all over her neck, back and leg! I had never seen her get so filthy from rolling in something. I should have taken photos. Thankfully Barb helped me wipe her down with water and dog shampoo when we returned to her house. 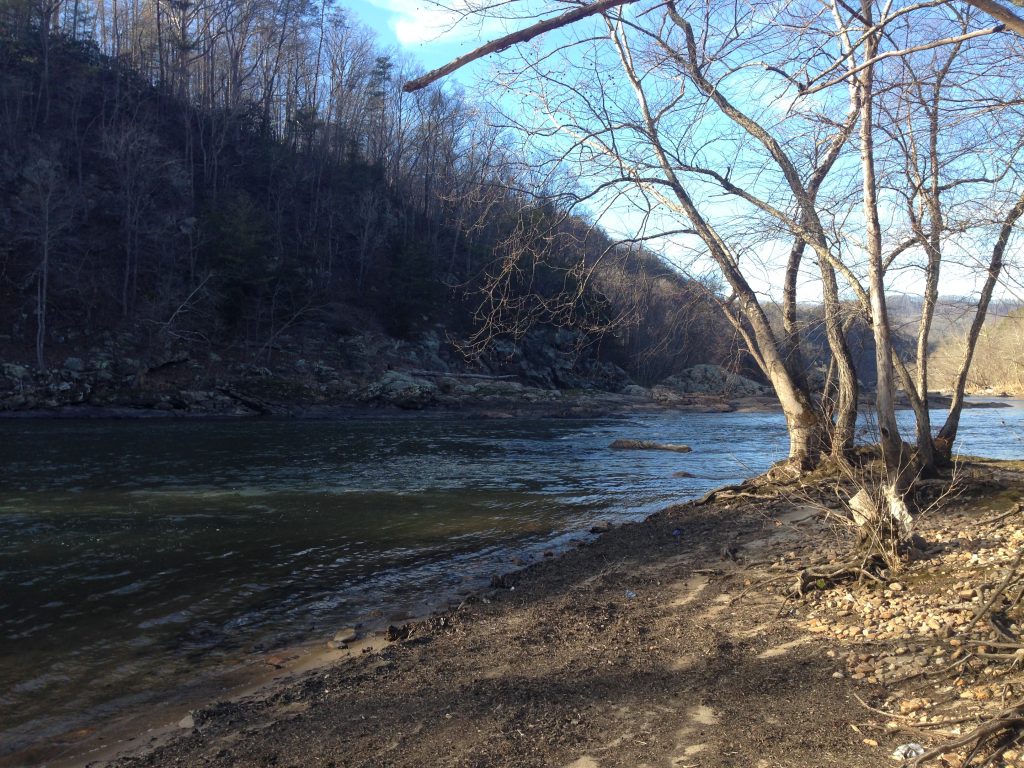 The river at the private French Broad River Park. 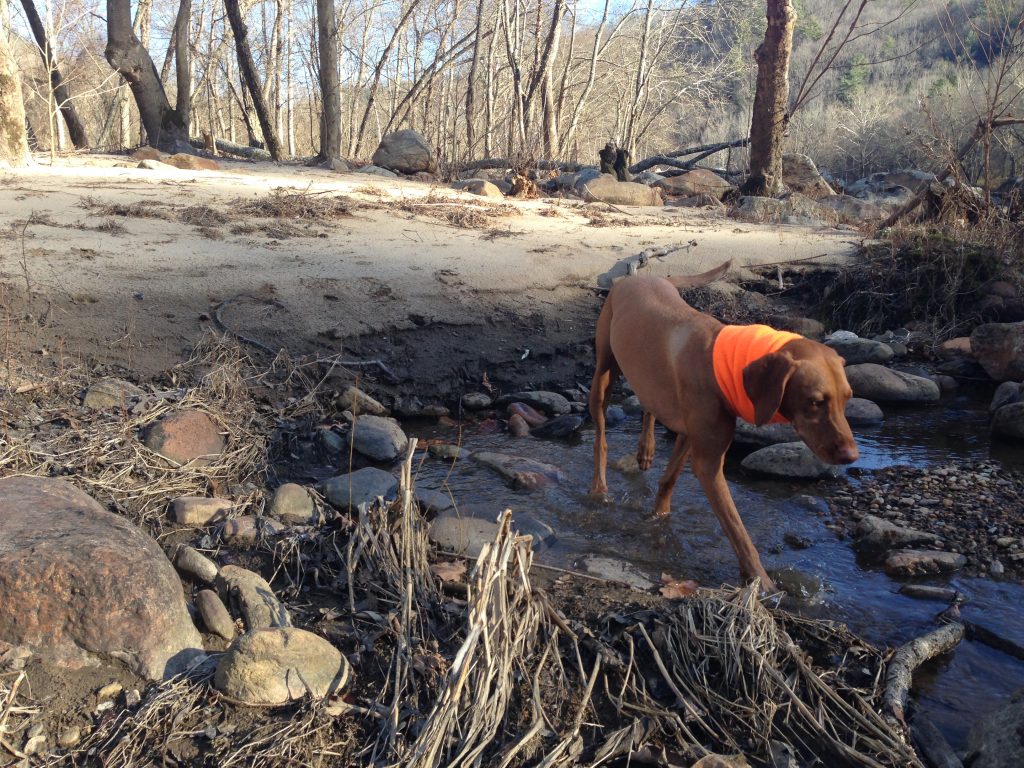 Zara did not want to stand still to have her photo taken.

After working on Friday morning, we headed to downtown Asheville in the afternoon and went to Asheville Brewing Company. Even though it’s February, it was 60 degrees and beautiful so we sat outside with the dogs. Zara was pretty well-behaved, eating a cow ear treat and getting petted by people at the nearby tables.

We stopped by the French Broad River Dog Park to let her run before our evening activities. It was a nice little park situated next to the river. We threw balls for Zara and she briefly played with another dog. Most of the dogs were mixed breeds and seemed to be more mellow than some of the dogs we encounter at the Raleigh dog parks. 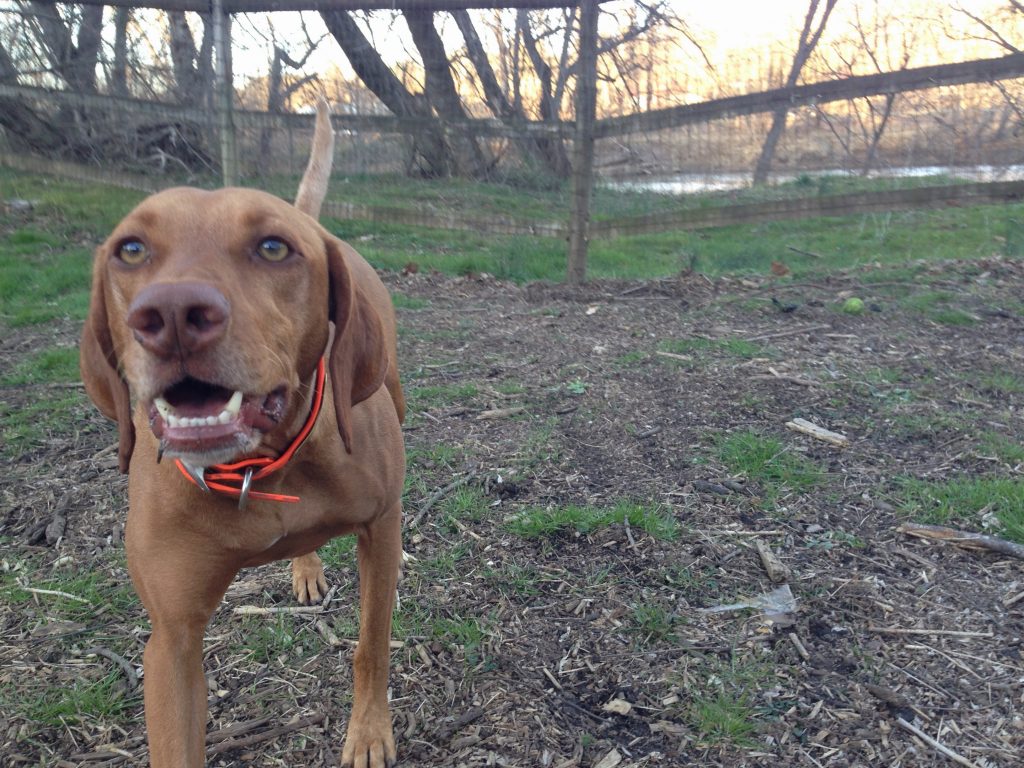 Smiles at the dog park.

For the rest of the trip, we stayed with Chris’ friend Nishan, his wife Bethany, and their three kids (ages 2, 4, and 6). Zara did great around the kids, although I think they tired her out mentally. I supervised her the whole time she was around them to make sure everyone was playing nicely. The older kids enjoyed playing fetch with her, petting her, and asking us a thousand questions about her.

On Saturday we headed up to Black Mountain and met up with two of Chris’ other friends and their families for lunch and then a short 3-mile hike up to Catawba Falls. The trail was a gradual uphill and back to a waterfall. It was fairly crowded, but we were able to let Zara run free for parts of it, which we all enjoyed. Given that there were a total of seven kids in our group, we moved quite slowly and spent some time hanging out in one of the creeks. 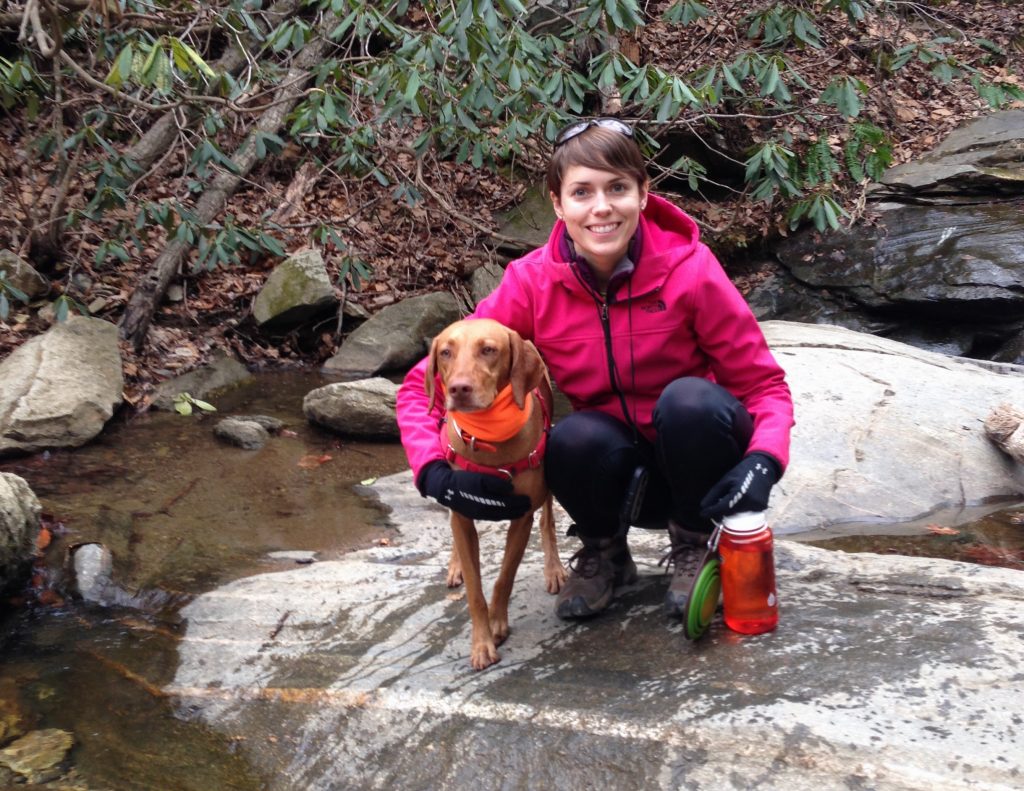 One of the creeks on the Catawba Falls trail. 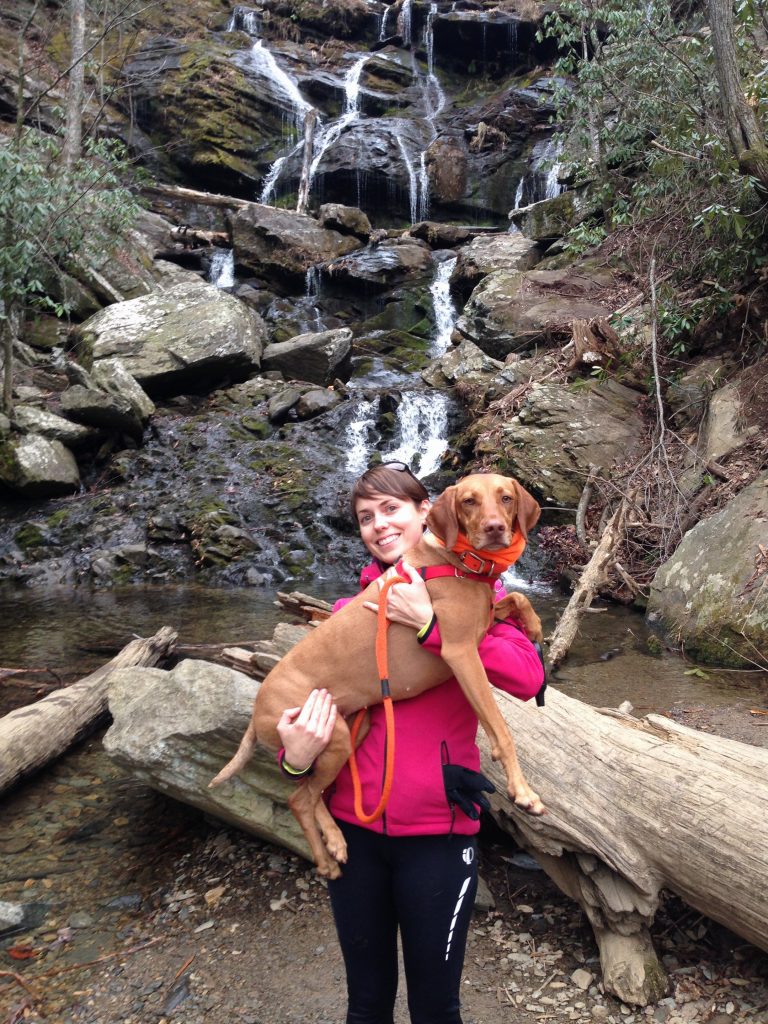 We made it to the waterfall! 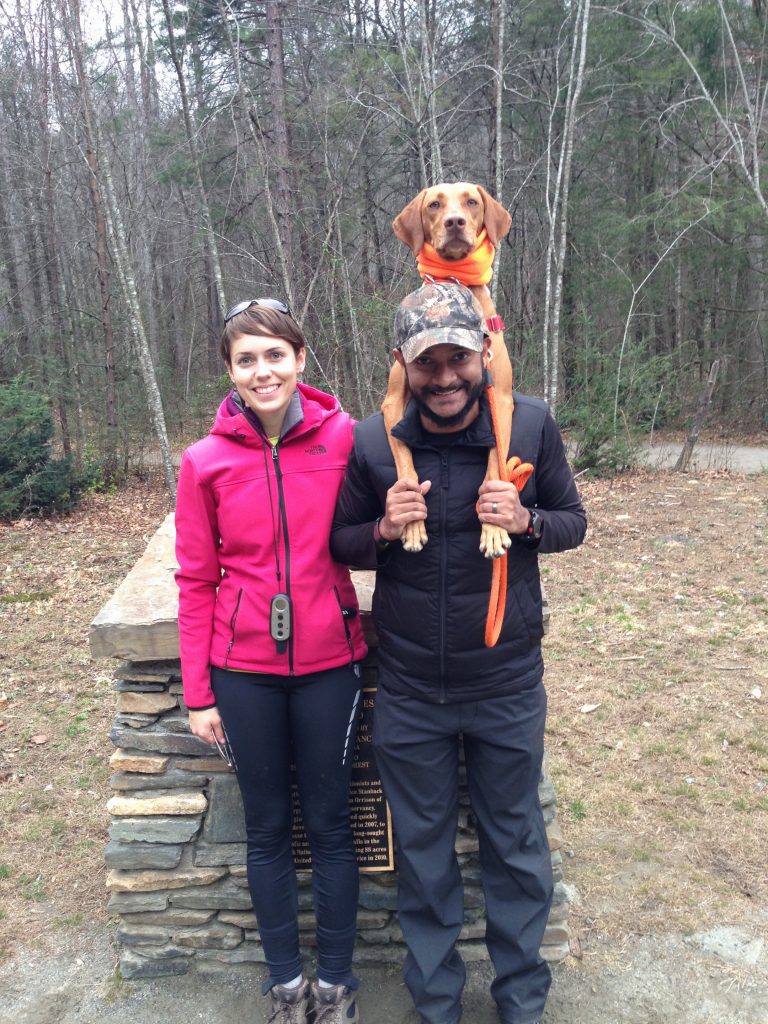 Family photo after the hike.

On Sunday, Chris played badminton with Nishan while I did some work. After that, Nishan invited a few of their Sri Lankan friends over for lunch and we hung out with them for a bit. In the afternoon, we headed to the French Broad River Park again to do some running. Zara and I ran six miles along the river trail, which was pretty and thankfully quite flat. The weather was beautiful – mid 60s – and lots of people were out on the trail and park.

Before heading home on Monday morning, chris and I went to visit the Biltmore estate, which is a massive mansion built by the Vanderbilts in the late 1800s. They allow dogs on the grounds but not inside. The property is 8,000 acres, so there is plenty of space to walk around. We mostly stayed near the house and Chris walked Zara for a bit while I went inside the house. The Vanderbilt family were dog lovers and they have named a restaurant on the property after their St. Bernard, Cedric. 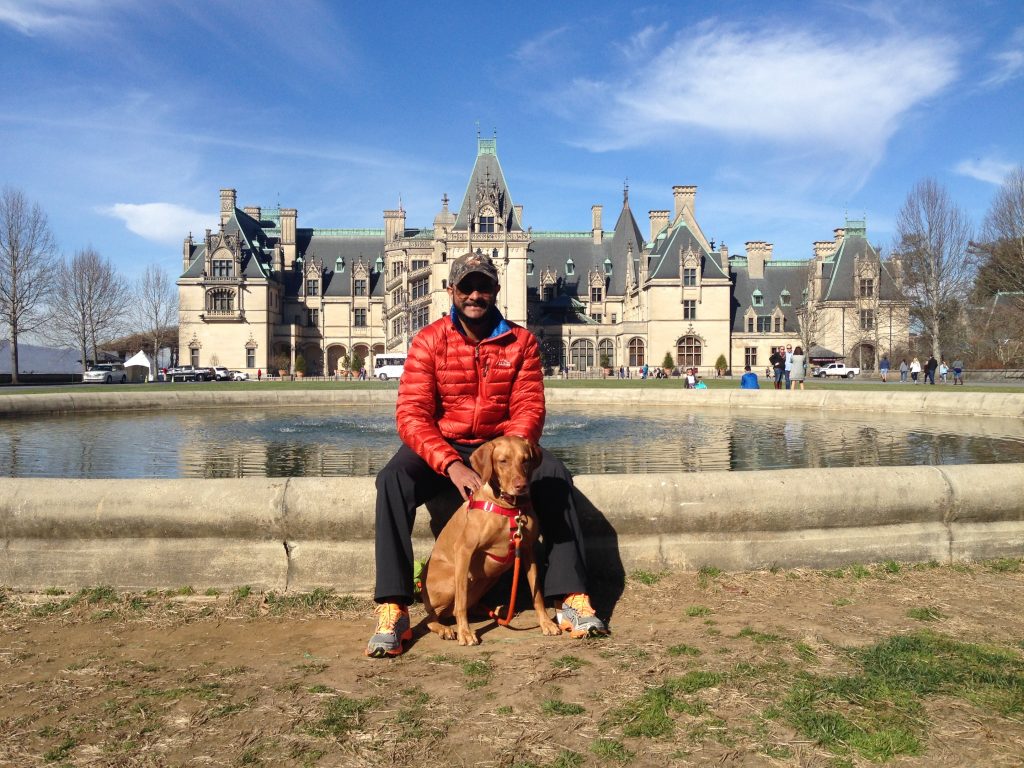 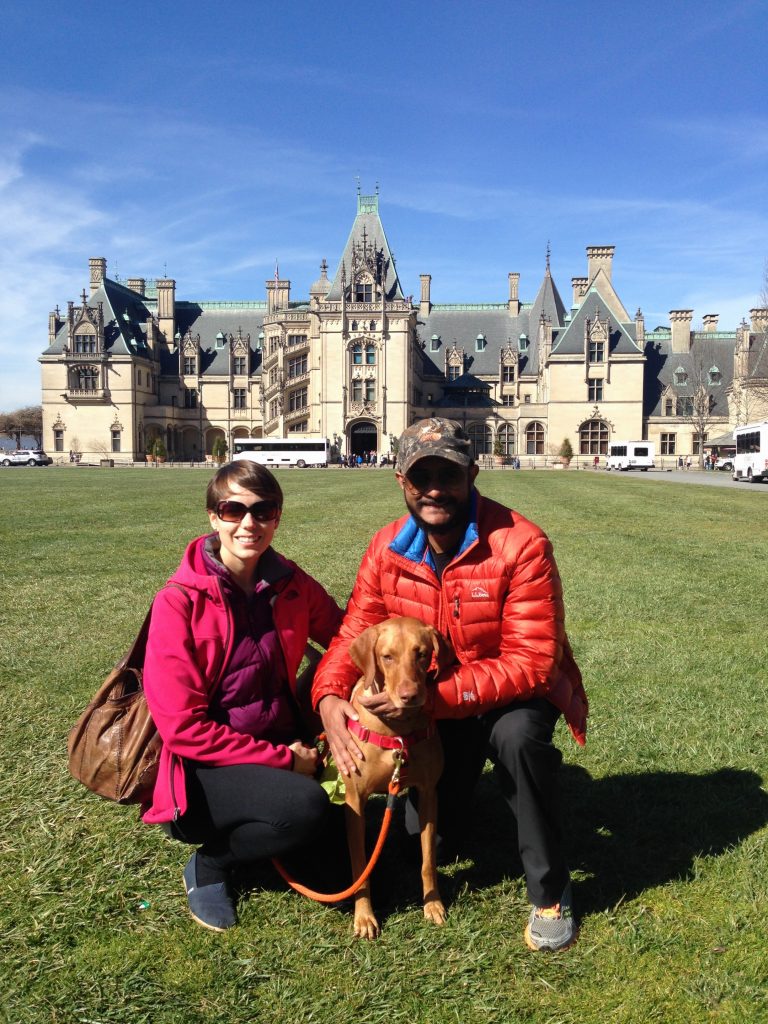 The place was massive!

It was a fun trip, and we are already talking about going back. I’m glad that Zara is such an easygoing traveler. As long as she’s fed and exercised, she’s pretty much up for whatever. She actually loves visiting and staying in strange houses. As soon as we arrive, she will run all around and sniff everything and be all excited. We are planning a two-week road trip to Maine this summer with her, so that will certainly put her traveling skills to the test.