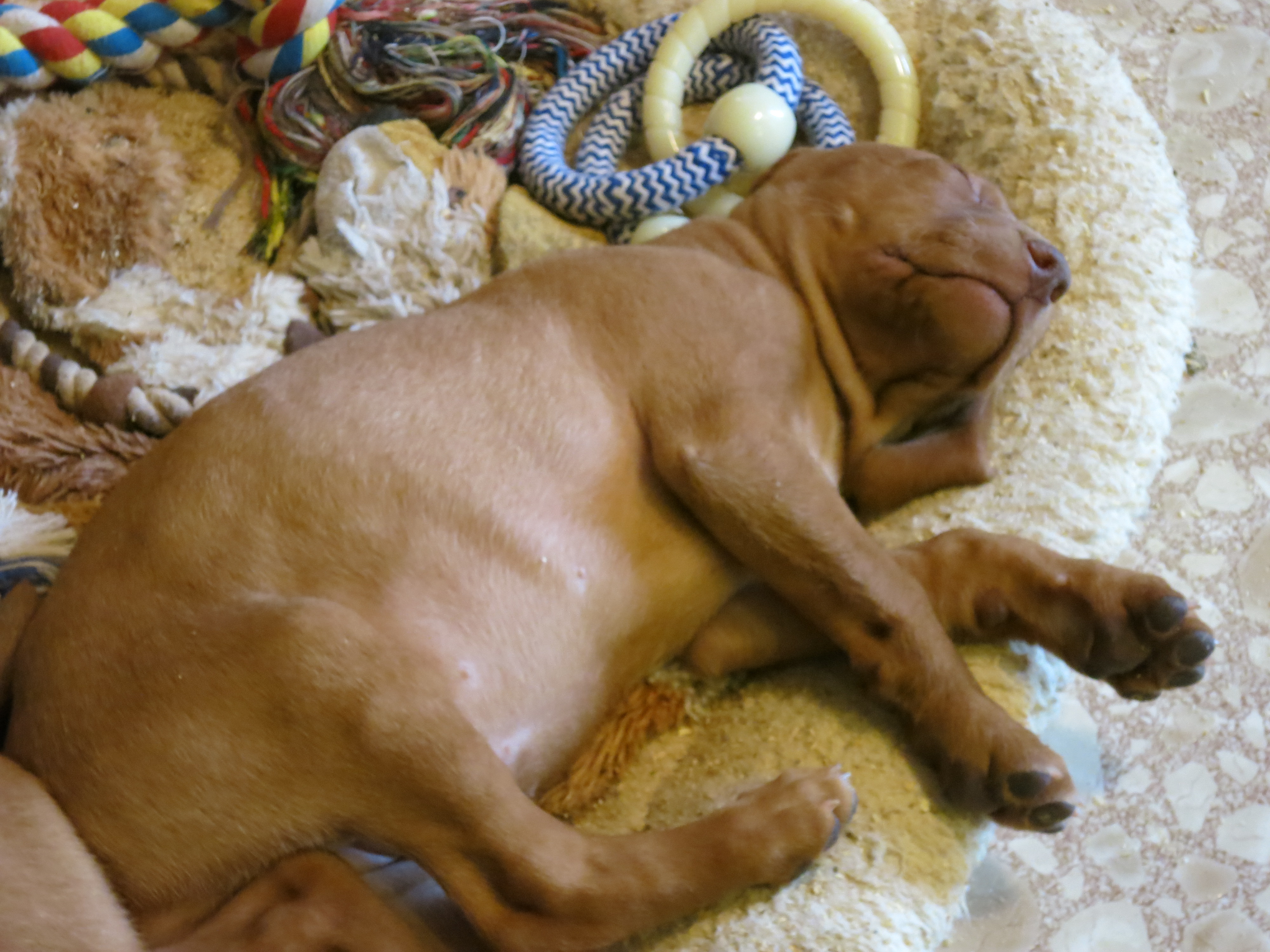 The litter of puppies that contained our Zara was born on October 11th. The litter had three girls: red, pink, and teal (called as such because of their collars). We didn’t find out which puppy would be ours until December 8th. Why did it take so long? Instead of choosing our puppy based on appearance, our breeder decided to wait until they were older and their personality had taken shape and perform temperament testing on them. I had never heard of this process but after learning more about it, I’m glad that she took the time to do it.

Last weekend, Chris and I were invited to watch the temperament testing. A friend of the breeder’s who also owns vizslas was performing the tests. The point of temperament testing is to figure out how each puppy reacts to different stimuli and thus, learn more about its temperament/personality. Knowing this information  allows the breeder to better match up puppies and families. For example, some of the people adopting vizslas were looking to use their dog for hunting/field trial competition, so they may want a dog that is a little higher energy and has a good nose (all vizslas have good noses, but some are even better than others). Other families have children, so their dog should be a little gentler and  perhaps more tolerant.

At the temperament testing, they had set up a fenced-off area with various items: a tunnel, a sheet of bubble wrap, several rocking platforms (the kind you use to work on your balance at the gym), a crinkly tarp, a bottle filled with noisy pebbles, and whole bunch of dog toys. One at a time, each puppy was brought into the area with the woman performing the test. Another person was videotaping and a third was making notes. We watched to see how each puppy would respond to the tester and the environment. It was really interested to see the differences! Pink girl was by far the highest energy of the bunch and she was totally set on the toys that were made of real fur. She kept grabbing them and running away from the tester! She didn’t seem to be afraid of anything and just barreled around the room. On the other hand, several of the other puppies were more cautious. Black boy and teal girl slowly sniffed the different things. They weren’t as interested in the fur toys. Purple boy impressed everyone. He allowed the tester to guide him onto one of the rocking platforms for a treat. Even as the platform see-sawed up and down, he stayed on it! The tester said he would be a very versatile puppy and great for children. Red girl had medium energy: less than pink but more than teal. I don’t remember a whole lot else about her test but when the woman held her tightly in her arms for close to a minute, Red struggled a bit. She eventually stopped struggling, but while some of the other puppies seemed to “forgive” the tester for keeping them still, Red would not look her in the eye. Not ideal, but hopefully more socialization would help out with this behavior.

The day after, we found out that red girl would be our Zara! We were happy with this news. We thought that pink girl would be too much for us and it made sense that lower-energy teal girl would be going to another family who didn’t seem to be as active as Chris and I. Chris was also excited because he prefers larger puppies/dogs for some reason, and currently, red is the biggest girl. The range for female vizslas is 40 – 55 pounds, so we’ll see where little miss Zara ends up. Probably on the higher end of that range!

We will be picking up Zara tonight. Super excited! Stay tuned for lots of cute puppy pics. :)