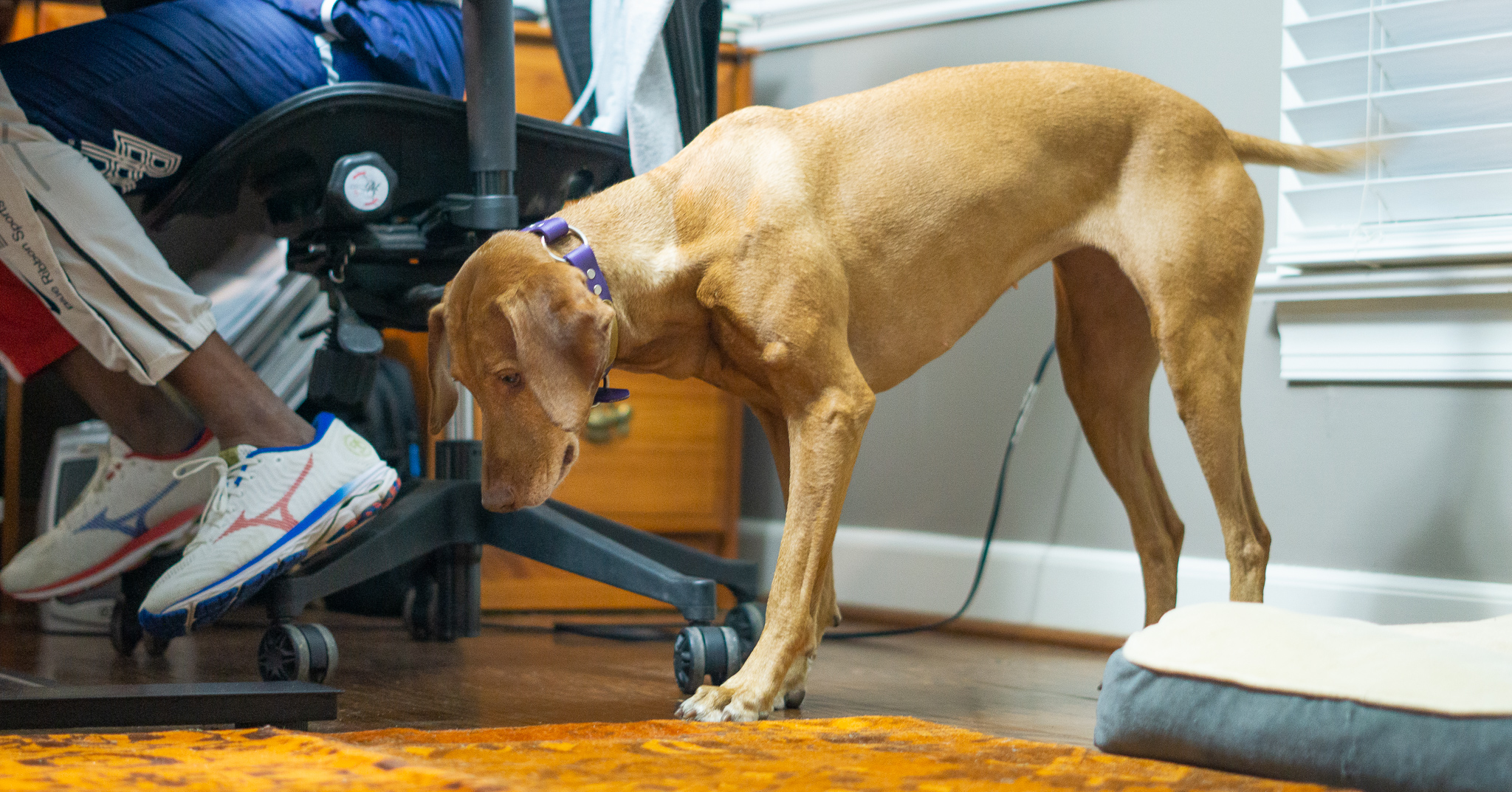 My Dog Chases Shadows and Reflections

In 2015, I wrote a blog post about Zara chasing shadows and reflections. She started doing this behavior when she was six months old. At first, we thought it was funny and encouraged it. Thankfully, not long after, I stumbled across an article online that said shadow chasing is an obsessive behavior and something that should not be tolerated. I felt terrible, thinking I had ruined Zara.

Six years later, I can confidently say that Zara is not ruined, but yes, she does still chase shadows. I thought I would write an update on this topic because I often see people post about it on Facebook vizsla groups. They fall into one of two camps: they either post a video of their dog doing it because they think it’s funny, or they are asking for help to stop their dog from doing it. As a new dog owner, like me, you may not know how to stop it or even that it should be stopped, so I’m hopeful that this blog post provides some guidance.

If you’ve never seen a dog hunting shadows, you might wonder what it looks like. When Zara does it, she’s typically staring at the wall or the ground and not moving much. She’ll sometimes stamp her feet a few times and whine. Occasionally she will bump her nose against the wall. She also wags her tail a lot. This is kind of ironic because she looks like she’s enjoying it. But that doesn’t mean I let her get away with it. The photo below shows a typical shadow-chasing position.

When Zara chases shadows, she’s usually staring at the floor or a wall.

Chasing Shadows is a Behavior That Probably Won’t Go Away

Chasing shadows is more common in dogs with a high prey drive, so vizslas certainly fit into this category. A lazier dog is probably less likely to do it. Colombo has certainly no interest in shadows or reflections. The problem with shadow chasing is that the dog never “gets” the object it’s chasing. So there’s no designated end to the activity. When a dog is chasing a bird for example, eventually the bird will fly far enough away that the dog will give up. Or if the dog chases a ball, it will catch the ball. With shadows, the dog keeps up the behavior because the shadows or reflections don’t go away unless the lighting changes. That is why it becomes obsessive.

Even though Zara doesn’t spend a lot of time chasing shadows, I think she will always have the tendency to do it. It’s like once you are aware of something, you can’t unsee it. I’ve noticed that she has a very keen eye. For example, she can spot a tiny bug on the ceiling that I don’t even know is there. But she still leads a very normal life even though she chases shadows occasionally.

This is the most important thing. Like I mentioned above, we did encourage it for about two weeks. I think this is possibly why it has stuck with her. If I had nipped it in the bud the first time we saw it, there may have been a different result. It’s hard to say. Sometimes Zara will do this behavior in public and other people will see it and think it’s funny. They’ll start waving their hands around to create moving shadows. I never hesitate to tell people honestly that I would like them to stop. You have to advocate for your dog and if you go about it nicely, people should understand.

How to Stop Shadow Chasing

The main way to stop shadow chasing is to redirect. When Zara was younger, we would shake a metal can with coins in it to make a loud noise and snap her out of it. She didn’t like the noise so she would stop. We’d pair this with the phrase “no shadows!” I never use the can anymore, but she knows what that phrase means.

The easiest thing to do is distract the dog by getting a toy for them to play with, moving to a different room, or giving them a “place” command. This gives them something else to focus on. This might be tedious at first, but it will work. I also noticed that Zara stopped chasing shadows as much after we got Colombo, because she could play with him if she was bored.

Zara chases shadows in the living room. She’ll stare at the wall or floor and wag her tail. She eventually stops after I tell her “no shadows!”

Never Use a Laser Pointer

This should go without saying, but if your dog is fond of chasing shadows and reflections, you should not use a laser pointer around them. Some people use these to exercise their cats. I don’t know enough about cats to tell you if that’s a good idea or not. But if a dog is prone to shadow chasing, a laser pointer is only going to make it worse.

As much as I try to prevent and stop Zara from chasing shadows, I also recognize that there are some situations where I can’t avoid it. The main example that comes to mind is when we are eating dinner at a restaurant outside and Zara is underneath the shadowy table. If she’s bored, she’ll often start fixating on the shadows under there. While I can tell her “no shadows,” it’s often hard to redirect in this situation since I am usually focused on eating my food or having a conversation with someone. When we go out, I do bring a chew or treat for her, but it doesn’t last the whole time.

Since she does this occasionally and it hasn’t seemed to make the behavior worse, I accept it while it’s happening. Now if this was an everyday thing, that wouldn’t be okay. But every now and then is probably alright.

Does your dog chase shadows or reflections? How have you dealt with it? Leave me a comment below!