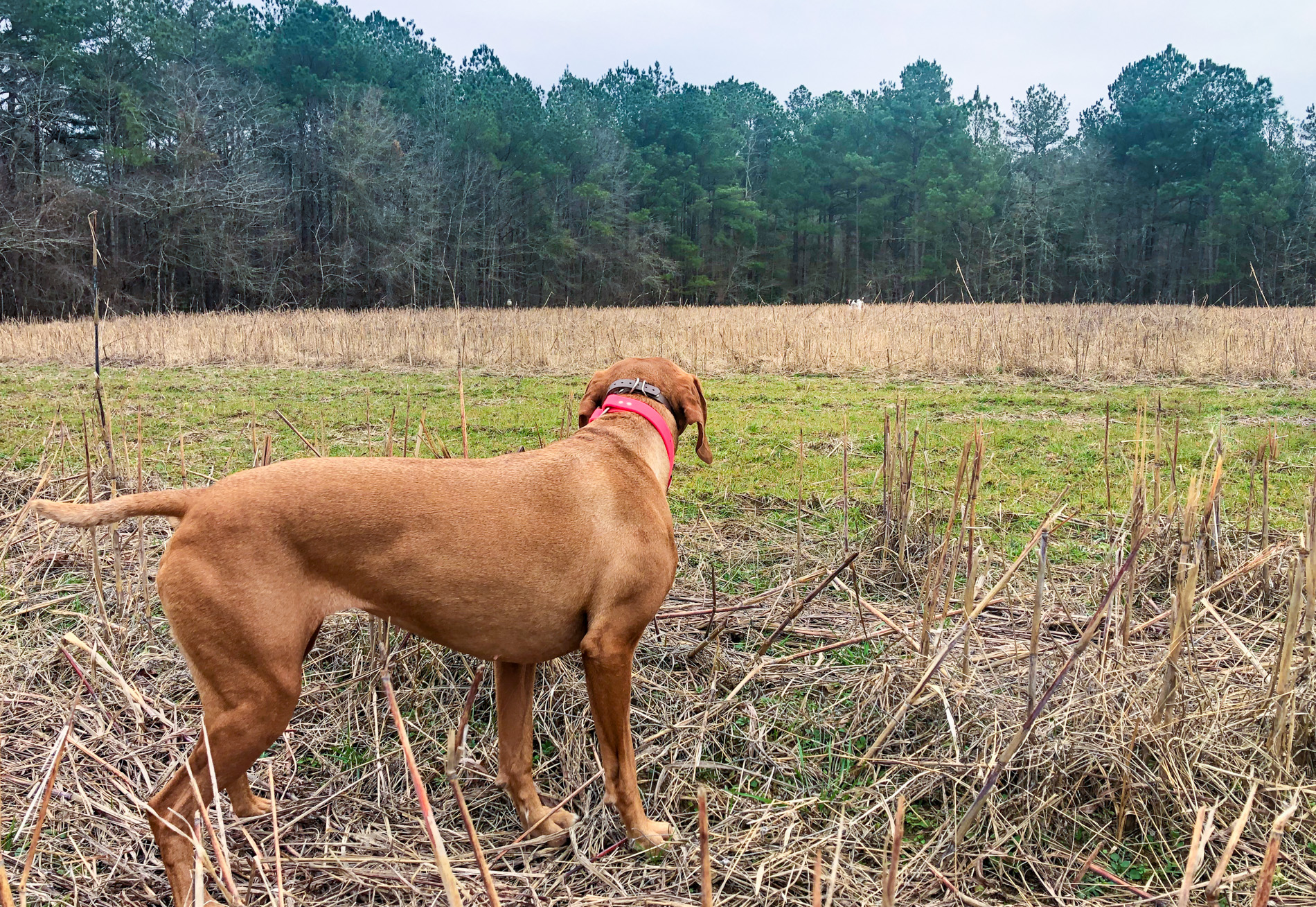 How I Taught Zara to Back Other Dogs

As many of you know, Zara and I have been running AKC Master Hunter tests this winter. At the Master level, dogs are required to “back” or stop of their own volition when their bracemate goes on point. Then they must stand through the entire retrieve sequence without being restrained. Like most of our bird dog training, teaching Zara to back has been a slow process. But she is finally becoming consistent, which is exciting.

Last winter, after we ran the NAVHDA Utility Test for the first time, I decided I wanted to do something different and run Zara in AKC Senior Hunter tests. Like all AKC hunt tests, dogs are run in braces of two at the Senior level. However, NAVHDA dogs are usually run singly until they start training for the Invitational, which is NAVHDA’s highest level test. Since Zara and I had primarily been training with our NAVHDA chapter, she hadn’t run with another dog since she did Junior Hunter tests three years earlier.

Some dogs back naturally – when they are run with another dog, especially at a young age – they automatically stop when the other dog is on point. This was not the case for Zara. To be fair, though, I’ll never know if she could have been a natural backer, because she didn’t have the opportunity to run with other dogs when she was a puppy. But I’m guessing she wouldn’t have been, because by the time we did Junior Hunter when she was two years old, she just ignored her bracemate.

When I was ready to teach Zara to back, I read multiple articles about how to do it and talked to several trainers about the methods they used. It seemed that a prerequisite for backing is a solid stop to flush. When a bird flies up, the dog should understand that they must stop until released, whether this is on a pointed bird, or a bird that is bumped when they are running.

Zara stops to flush on her own when the pigeon is released from the electronic launcher.

Unfortunately, Zara didn’t completely understand stop to flush at the time. During my training, I had never had regular access to live birds and electronic launchers and I didn’t know what I was doing enough to teach her this skill (I certainly know what to do with my next dog, haha). At the beginning of 2020, I joined Cripple Creek Kennel’s Bird and Gun Dog Club which is 45 minutes from my house and I was finally able to teach Zara how to stop to flush. I used pigeons in launchers and she picked it up pretty quickly.

After a dog reliably stops to flush, one way to introduce  backing is to use a wooden pointing dog silhouette or an electronic version where you can move it up and down. Cripple Creek has the electronic version, so that’s what I used. I would position the backing dog in the field with a pigeon in a launcher next to it, so it looked like the fake dog was pointing the bird. Then I’d bring Zara up so that she would suddenly see the dog. As soon as she saw the dog, I would launch the pigeon to cause her to stop. In the video below, I give her a whoa before I launch the bird. It wasn’t long before she was stopping on her own when she saw the backing dog.

Zara sees the fake backing dog silhouette for the first time. She doesn’t initially stop when she sees it, so I give her a “whoa” to stop her. Then I immediately launch the pigeon.

After a few sessions, Zara was stopping on her own as soon as she saw the backing dog.

My process to teach Zara to back was a little more complicated than it could have been. Ideally, after exposing her to the fake dog, I would have had someone with a real dog get them on point on pigeon. Then I could have brought Zara into the vicinity and launched the pigeon as soon as she saw the other dog on point. Unfortunately, I wasn’t able to do that with other people last year, so I used the whoa command as an intermediary step. When Zara would see a dog on point (the dog would be pointing a planted quail or chukar), I would give her a whoa command to stop her. At this point, she had a reliable stop to whoa while running. That is the technique I used when we ran Senior Hunter tests, because you can command the dog.

For the most part, it worked pretty well, but it was sometimes hard for me to tell if Zara was looking at the other dog. In one of our hunt tests, we got picked up because the judges said I didn’t give the command to Zara at the right time.

In 2020, when I ran Zara in Senior Hunter tests, I would command her to stop when the other dog was on point. She didn’t translate stopping with the backing dog to a live dog very well.

Retrieving as a Reward

After we completed Zara’s Senior Hunter title in February 2020, I didn’t have a lot of opportunities to run her with other dogs and work on backing for the rest of the year, partially due to COVID, the difficulty of accessing training partners, and focusing on other things, namely her second try at the NAVHDA Utility Test.

Finally, in November, I reached out to two fellow NAVHDA members to see if they could help me teach Zara to back without a command. I knew I wanted to run Master Hunter tests and commanding to back is not allowed at that level. They recommended using retrieving as a reward for backing. When we first started, if the other dog went on point, I would whoa her to stop or we’d launch a pigeon (sometimes the pigeon didn’t get launched at the right time). Then they would throw a quail, shoot it, and I would send Zara to retrieve the quail first even though she was backing, not pointing. (The other dog would get a retrieve after Zara was done). This quickly taught Zara that backing means she might get a bird. We eventually mixed it up so that sometimes Zara would get to retrieve after the pointing dog and sometimes she wouldn’t get a retrieve at all.

After only a few reps, she started backing the other dogs on her own, which was very exciting. At the Master level, you can “quietly caution” your dog while it is honoring, so I would stand next to Zara and whisper “whoa” and “good girl.” Thankfully, Zara is pretty obedient and once she stopped, she was pretty consistent about not moving through the other dog’s retrieve sequence. Getting her to stop without a command had been a bigger battle.

Zara stops running when she sees the other dog on point. She’s a little hesitant and looks to me for confirmation. This was the first time she saw this dog go on point. Then she stands through the whole retrieve sequence.

After Zara was consistently backing the other dog at the training field we were using, I knew we needed to expand to other locations and run with other types of dogs. Dogs tend to associate a certain location with learning a new skill and it often doesn’t translate to a new location. Thankfully, before Zara’s first Master Hunter test, I was able to train at the same field where the test would be held. Since then, I’ve had her at a few different locations, too.

The people I was training with have German Shorthaired Pointers, but you can encounter a lot of different breeds at hunt tests: small Brittanies with feathery coats, gray Weimaraners, furry Wirehaired Pointing Griffons, and Setters with long, feathery tails. So far, Zara has been able to run with GSPs, Weimaraners, a German Wirehaired Pointer, and a Gordon Setter. I’m hoping to run with other vizslas and Brittanies soon.

One other thing I learned was that you have to give your dog enough time to see the other dog. Zara is typically in her own world when she’s hunting and her nose is often to the ground. I have to get her attention and try to direct her toward the other dog so that she takes notice.

Have you taught your pointing dog to back? Did you use similar techniques?