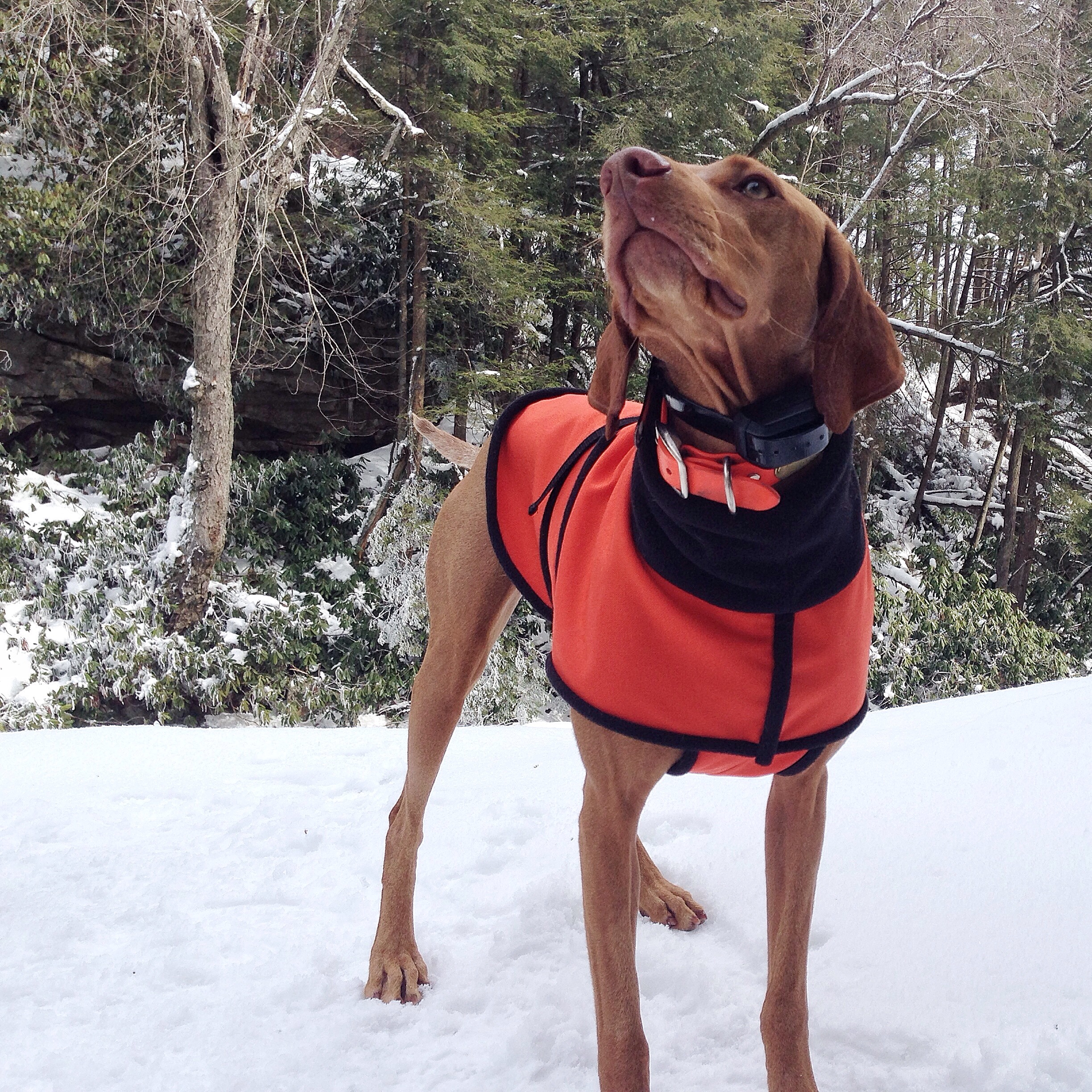 Note: This is a very delayed post that I wrote in February. I’ve been very inconsistent about posting lately and I apologize!

In February, we went to Deep Creek Lake, Maryland for a long weekend. It’s about 3 hours away from DC and Chris and I have gone there a few times over the past couple of years. We had rented a house with some friends and were planning on going skiing at Wisp Resort. The house was dog-friendly so Zara got to come along as well. She had been to Deep Creek two years ago, but she was only 4 months old at the time. 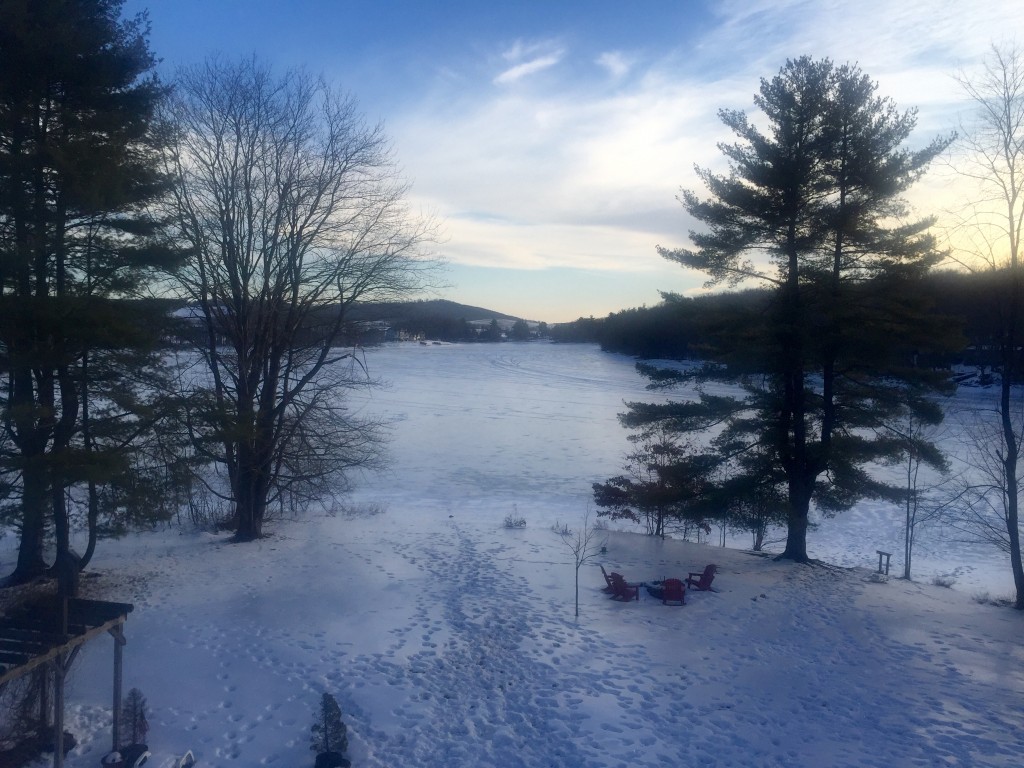 View of the back yard that led to the frozen lake! People were walking on the lake but I was afraid of going out there.

The house we were staying in was large and had a good-sized backyard.  There were eight humans and three other dogs – Jax, Sasha, a 15-year-old beagle/German Shepherd mix, and Caly, an 8-year-old pit/sharpei mix. The dogs got along very well. Caly is not part vizsla as far as we know, but she was even more Velcro than Zara! She would find any available human and curl up next to them on the couch and put her head on their lap. It was so cute. Unfortunately I didn’t take any photos!

Chris, myself, and three of our friends arrived on Thursday evening. There was a good amount of snow on the ground when we got there which made it feel like a nice wintry getaway. Zara was super excited to explore the house – she ran up and down the stairs and into all of the rooms as soon as we got there.

On Friday morning, we took her hiking. I had looked up a couple areas nearby and there were two state forests (Garrett State Forest and Potomac State Forest) that actually allow dogs off-leash! We were planning to go to the Garrett forest but the more I thought about it, the more I was afraid that we would run into a bear. We have not seen any bears on our hikes near DC but I know they are much more common in western Maryland. My friend has family that lives in the Deep Creek area and her grandmother saw a bear in her front yard one day! Before leaving for our trip, I somewhat obsessively researched what to do if we ran into a bear. The websites recommended carrying bear spray, which we didn’t have.

After getting somewhat freaked out by my research, I decided that a secluded backcountry forest may not be the best place to hike. Instead, we went to Swallow Falls state park, which borders Garrett State Forest but is much more accommodating to humans. It has well-established trails and I figured bears would be less common in an area frequented by humans. The website didn’t specifically say if dogs had to be on a leash or not and there weren’t any signs at the entrance. We let her off but put her on the leash whenever we ran into people.

The hike was nice and very scenic. The trail followed a river and there were beautiful views of waterfalls. We did not run into any bears but about 15 minutes into our hike, we encountered several drops of blood on the snow-covered trail. This really creeped me out because it looked fresh. Even Zara seemed wary. We weren’t sure if it came from a human or animal. I kept looking over my shoulder as went along, but thankfully we made it out of the forest safely. 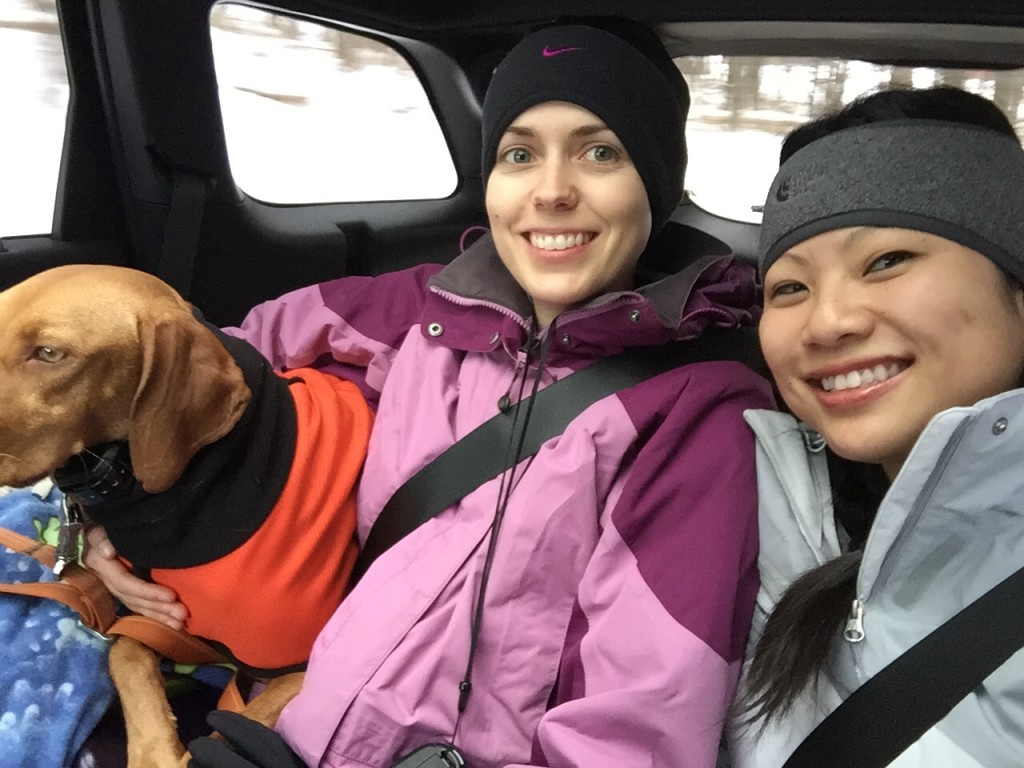 Driving to the hike 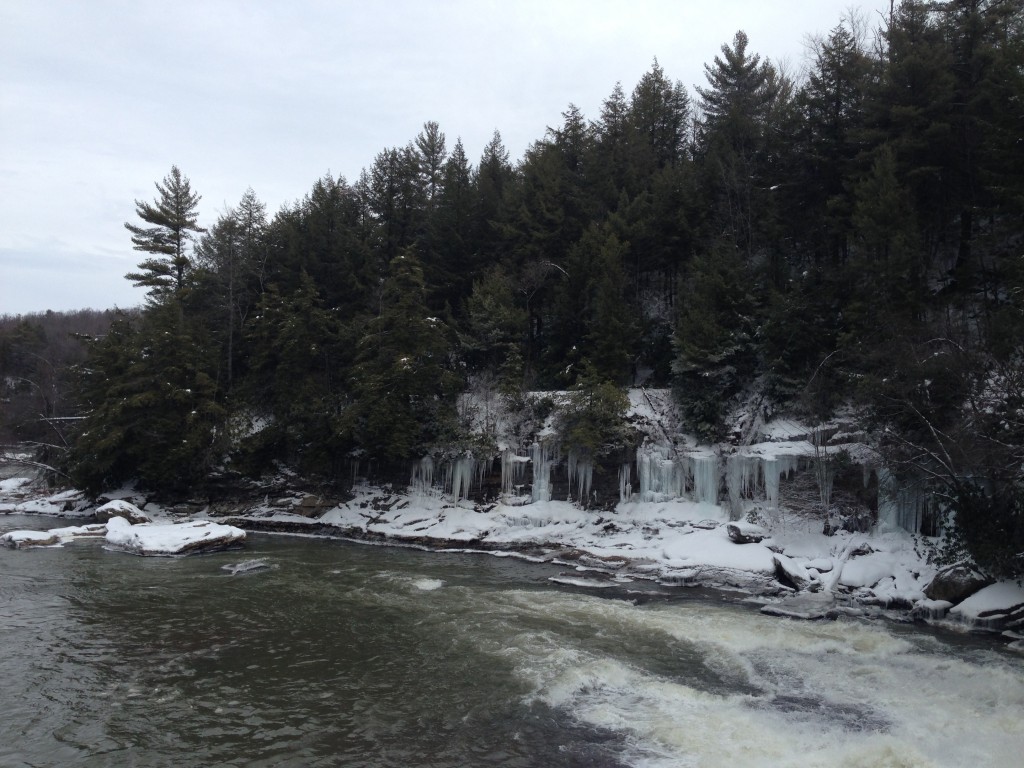 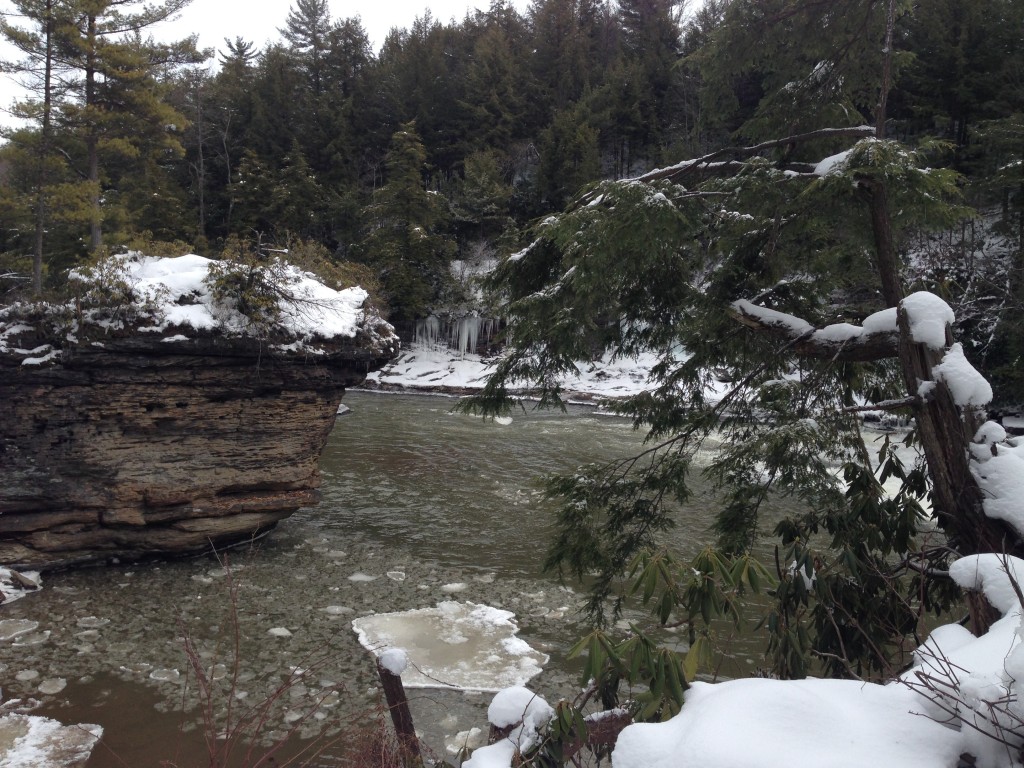 The scenery was very pretty. 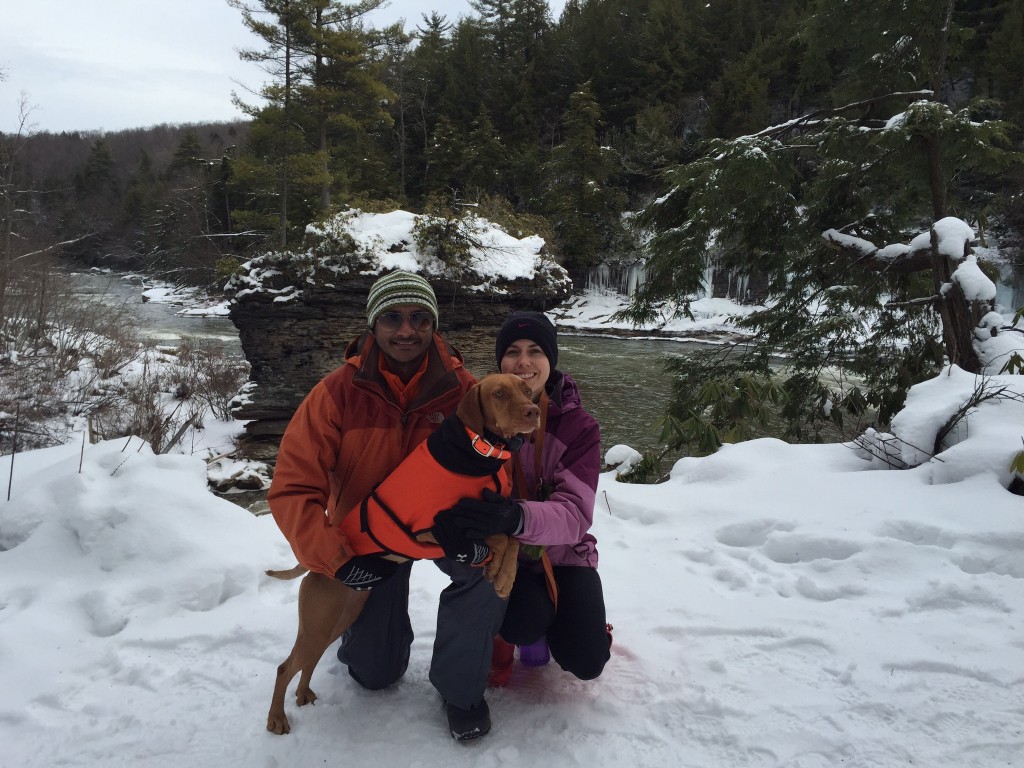 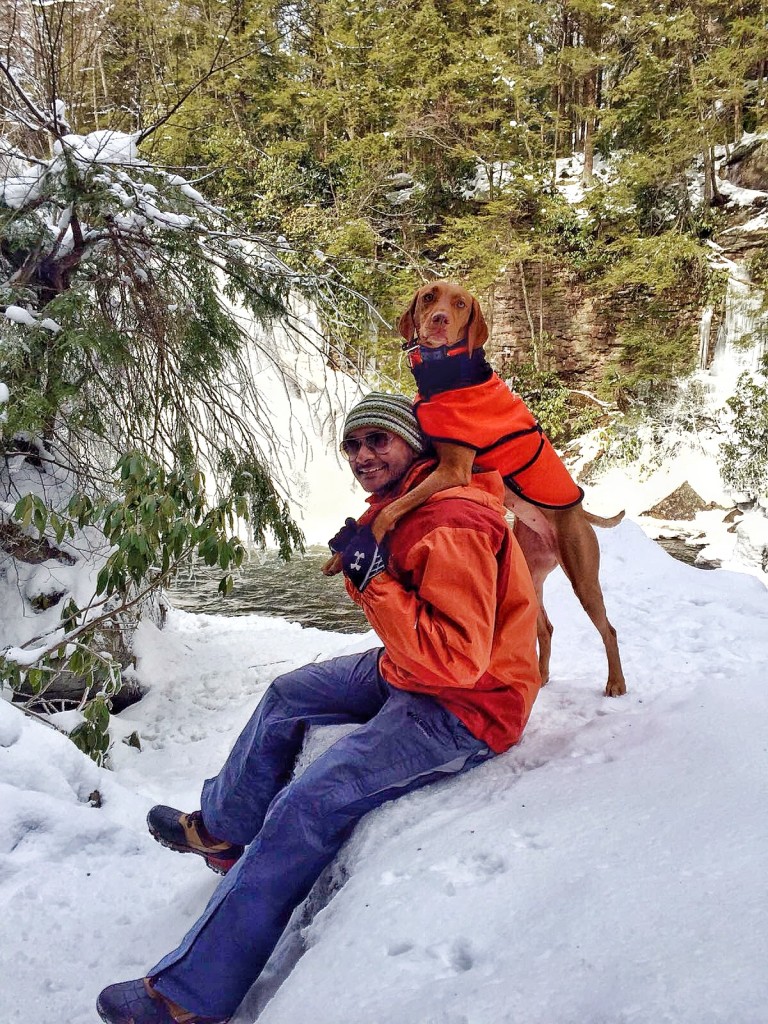 On Saturday, Chris took Zara back to Swallow Falls in the morning while I went skiing. Then he came to the ski resort and we switched places. Zara couldn’t go skiing, unfortunately. ;) It was a nice, relaxing weekend with friends and I think Zara had a good time. Deep Creek Lake is a great place to take a dog. We’ve been there in the summer as well, and you can kayak on the lake, go hiking, and camping. 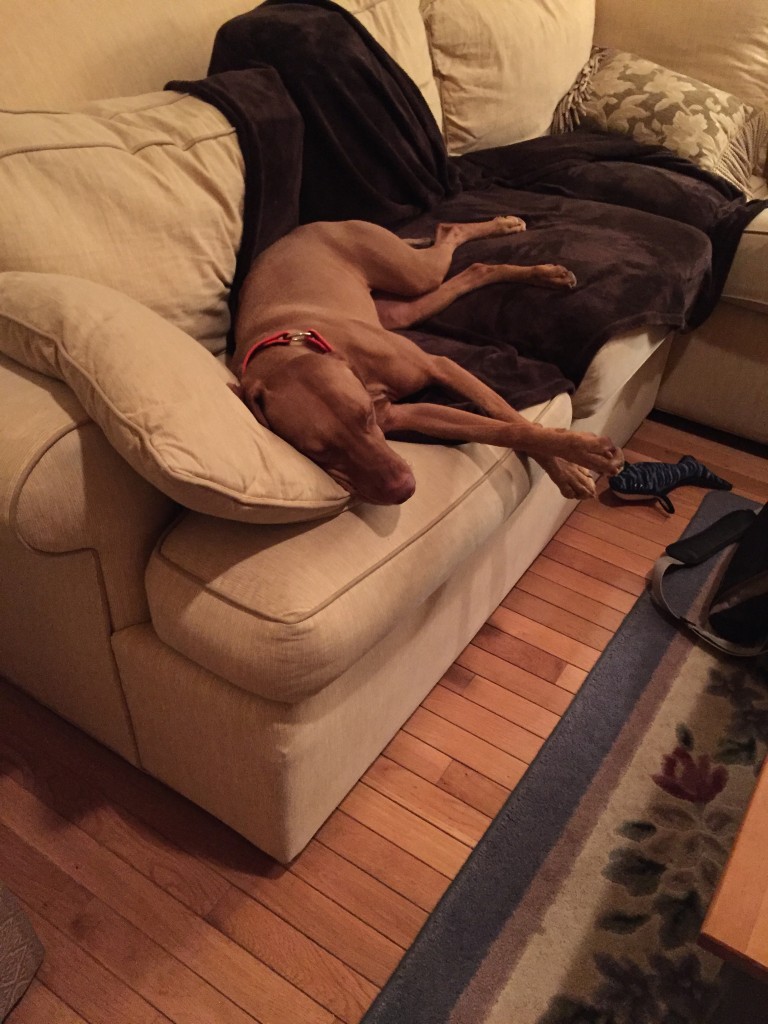 Time for a snooze!