Three weeks ago, we brought home a little brother for Zara…a 10.5 week old Rhodesian Ridgeback puppy named Colombo! Chris and I have been talking about getting a second dog for a while now – probably at least since Zara was a year old.

Originally, I wanted to get another vizsla – either a male puppy or a 2 or 3 year old vizsla rescue, but Chris was not on the same page. He has always wanted a large dog, even larger than Zara (who’s about 50 lbs), and he wanted a dog who was somewhat less energetic than a vizsla. Yes, vizslas have tons of energy, but once you’re used to one, how much harder can a second one be? That was my reasoning. One of the reasons we wanted a second dog is to entertain and play with Zara.

We’ve seen Rhodesian Ridgebacks at the dog park and in public. While they are able to run fast and keep up with a vizsla, most I’ve seen have been walking nicely on a leash or slowly lumbering along. They’re known for being energetic, but also as lazy couch surfers.

We started looking into breeders early in 2016 and spoke to a couple in North Carolina and Virginia. I eventually connected with Carrie Ellingson with Adriatic Ridgebacks, who was breeding her female ridgeback for the first time in 2017. We spoke several times and met up last fall at her house to meet her dogs. We liked that she is a member of the national ridgeback club, had done all the health testing on her dogs, and is also a raw feeder!

The litter of puppies was born on April 13th and there were seven – two males and five females. We brought Colombo home on Tuesday, June 27th. Carrie kept him for an extra two weeks since we had planned a vacation prior to knowing when the pups would be born. 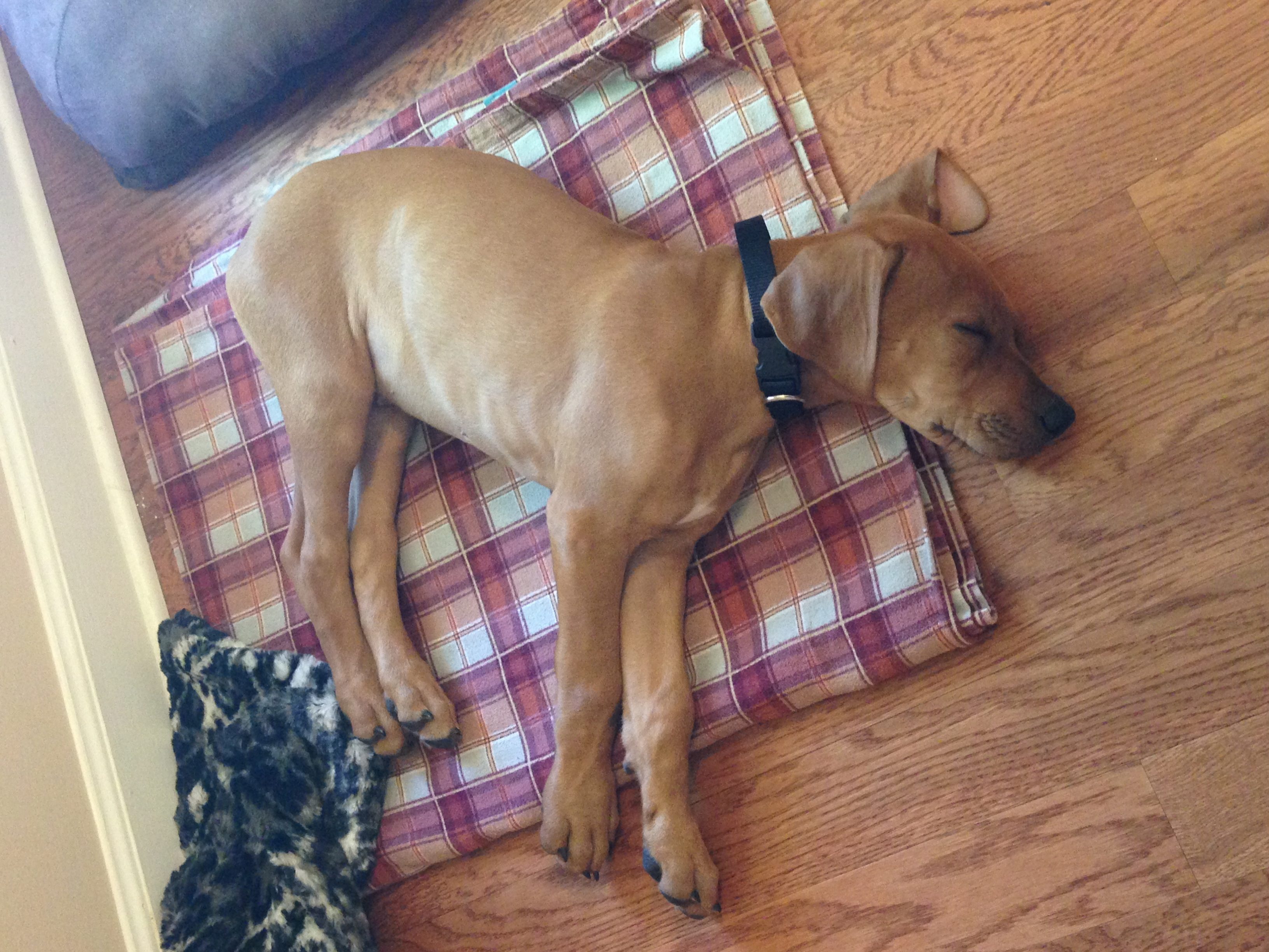 Sleeping in my study on his first day home.

Chris and I were curious how Zara would react. She likes puppies, but she also likes to establish her dominance and is a bit of a spoiled princess, so we didn’t think it would be love at first sight. She was definitely not thrilled, to say the least. It’s been three weeks and she is gradually adjusting. She plays with him in spurts – but it is always on her terms, when she’s in the mood. Colombo, on the other hand, loved her instantly and spends a lot of his time watching her, trying to get her to play with him, and/or annoying her with drive-by shark bites with his needle teeth. I really don’t blame her for not being enthusiastic. 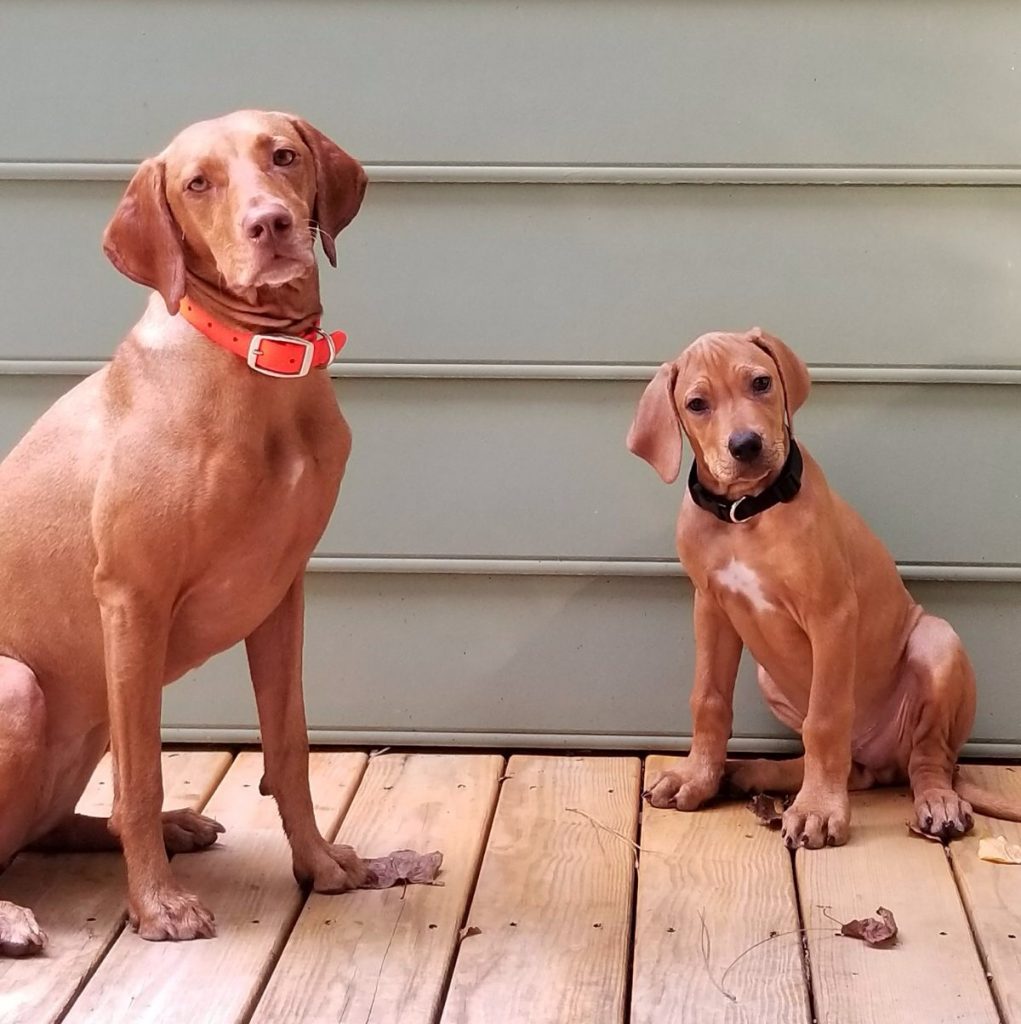 Forced family portrait on one of Colombo’s first days home. Zara does not look thrilled!

I read an article by a woman who regularly raises service dog puppies and also has three adult dogs of her own. She said that none of her adult dogs ever liked the puppies at first sight, they always snapped or growled, but they never hurt the puppies. She said it often takes 3 weeks or more before the adult dogs enjoy playing with the puppies. At first, Zara would only have Colombo chase her as she held a toy in her mouth, usually outside. After a week, she would wrestle with him with a toy in her mouth. After two weeks, they began “mouth wrestling.” Now, as I write this, they are both laying down on a dog bed, rolling around and mouth wrestling. She does seem to be liking him better. 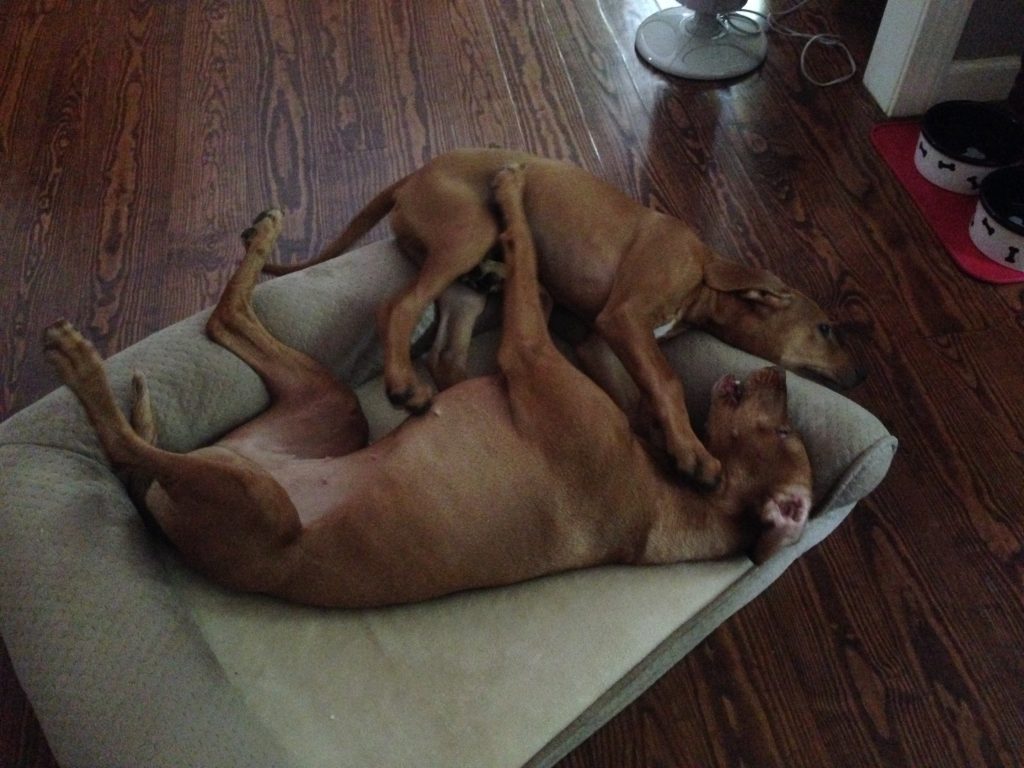 It’s interesting to see his personality develop and notice the differences between a ridgeback and a vizsla. He definitely moves at a slower pace than Zara ever did. I open the door to let him outside, and he sits down and thinks about it. I ask him to come up the stairs and he thinks about it. Zara will just barrel in any direction I ask!

I have to sit like this on the couch to keep the peace. Otherwise, Colombo tries to snuggle with Zara and she gets annoyed!

Having another puppy around has been challenging at times, but I certainly feel more prepared and equipped than I did when Zara was a puppy. This time, we have a very clear idea of what awaits at the end of the long (but actually quite short) puppy tunnel – a well-behaved, friendly adult dog!

He is cute while he is sleeping!

Hanging out with some friends this weekend. Happy

This is why it’s sometimes difficult for me to t

Zara caught this baby rabbit in our yard several w

*CLOSED* GIVEAWAY! 🐕 I am now selling prints of

Apparently there was a big dust storm that came fr

This morning, Zara creeped on 4 out of the 5 birds

This site contains affiliate links. As an Amazon Associate I earn from qualifying purchases.