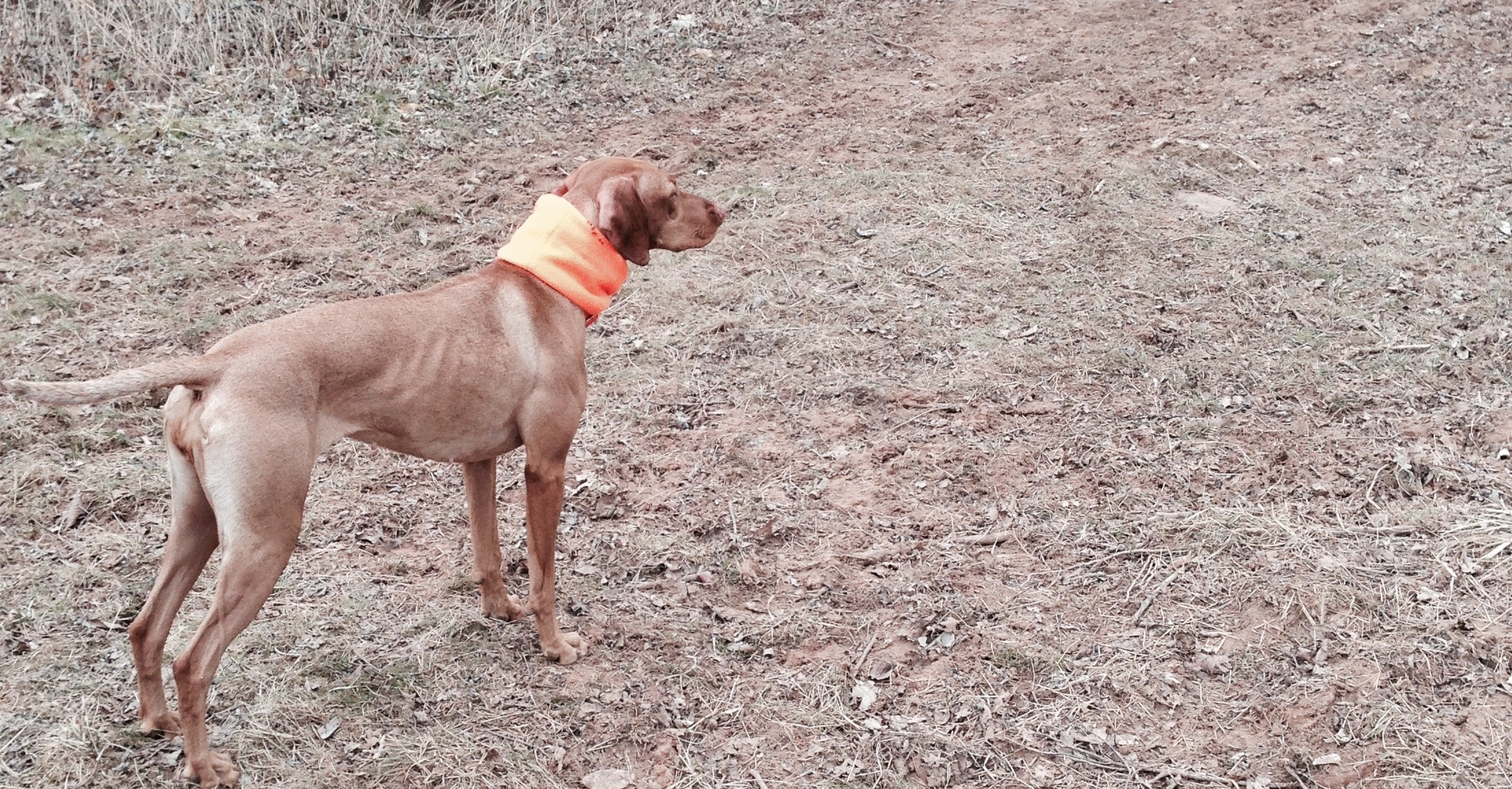 This past Saturday, Zara and I met up with her breeder, Jane, to do some bird training. The Conestoga Vizsla Club, which we belong to, is holding a hunt test in December. Hunt tests are one way for vizslas and other pointing breeds to show their skills locating and pointing birds. There are three levels: Junior, Senior, and Master. Although we did not specifically want a vizsla for hunting, I think it would be fun to see how she does in the Junior Hunter stake. Although she didn’t show a strong hunting desire during the temperament testing or any time after, she has become obsessed with hunting squirrels and chipmunks lately. Every time we let her outside, she slowly stalks out the door, surveying the yard for any potential victims. (Victims is right: she’s killed one squirrel and caught two chipmunks). So it seemed like she would show similar interest in birds.

Jane and I met at the dog training area of McKee Beshers Wildlife Management Area in Poolesville, MD. It’s a large area used for hunting and other purposes. The dog training area was an ample-sized field with various vegetation: short dried wheat stalks, mowed down grass, and trees/brush. It was the perfect area for training and just letting Zara run around.

Jane brought several live quail, along with Zara’s mother Caiya and her brother Max. Max’s owners are planning on entering him into the hunt test too.

Jane put a bird out in the field in a cage and then we took Zara out to see if she could find it. She actually found it pretty quickly but was a little afraid of it at first. She jumped back when it moved and then creeped up toward it again. She was kind of pointing at it but her tail was wagging instead of being straight. We stroked her tail to get it to stop and stand straight. Then Jane released the bird and shot her blank pistol when it flew away. Zara got a little freaked out by the noise of the gun but didn’t seem too traumatized.

We brought Caiya out next to see if Zara would follow her around and imitate her. Caiya took off sprinting, totally focused on hunting. She has her Junior Hunter title and has been in several field trials, so she knew what she was doing. Zara was following her but I don’t think she was completely sure what she was supposed to be doing yet.

After a bit, I put Zara in my car to give her a break and got Max out. (Three dogs at once would have been too much to handle). Max also seemed ready to hunt birds and he wasn’t afraid. He pointed at the first bird right away. It then got stuck in a tree after we flushed it, because it has a string and a fishing weight attached to its leg. Jane and I had to go tramping through the brush to rescue the poor thing because it was hanging by one leg.

Max and Caiya ran around some more and when Max came upon the next bird, he REALLY wanted it and tried to move in on it. Jane said he definitely got Caiya’s hunting desire.

Finally, we got Zara out again and she seemed to get the hang of it after a couple more repetitions. She still seemed a little scared of the birds and gun but was getting more excited about finding the birds. Jane said she remembered from the temperament testing that Zara was a little slow to warm up to things and had to learn at her own pace.

Afterwards, she slept the whole way home and stayed on the couch the whole evening as well. It was fun to see her trying something new. We’ll see how she does in the hunt test. Regardless, it will be fun for us to do together.