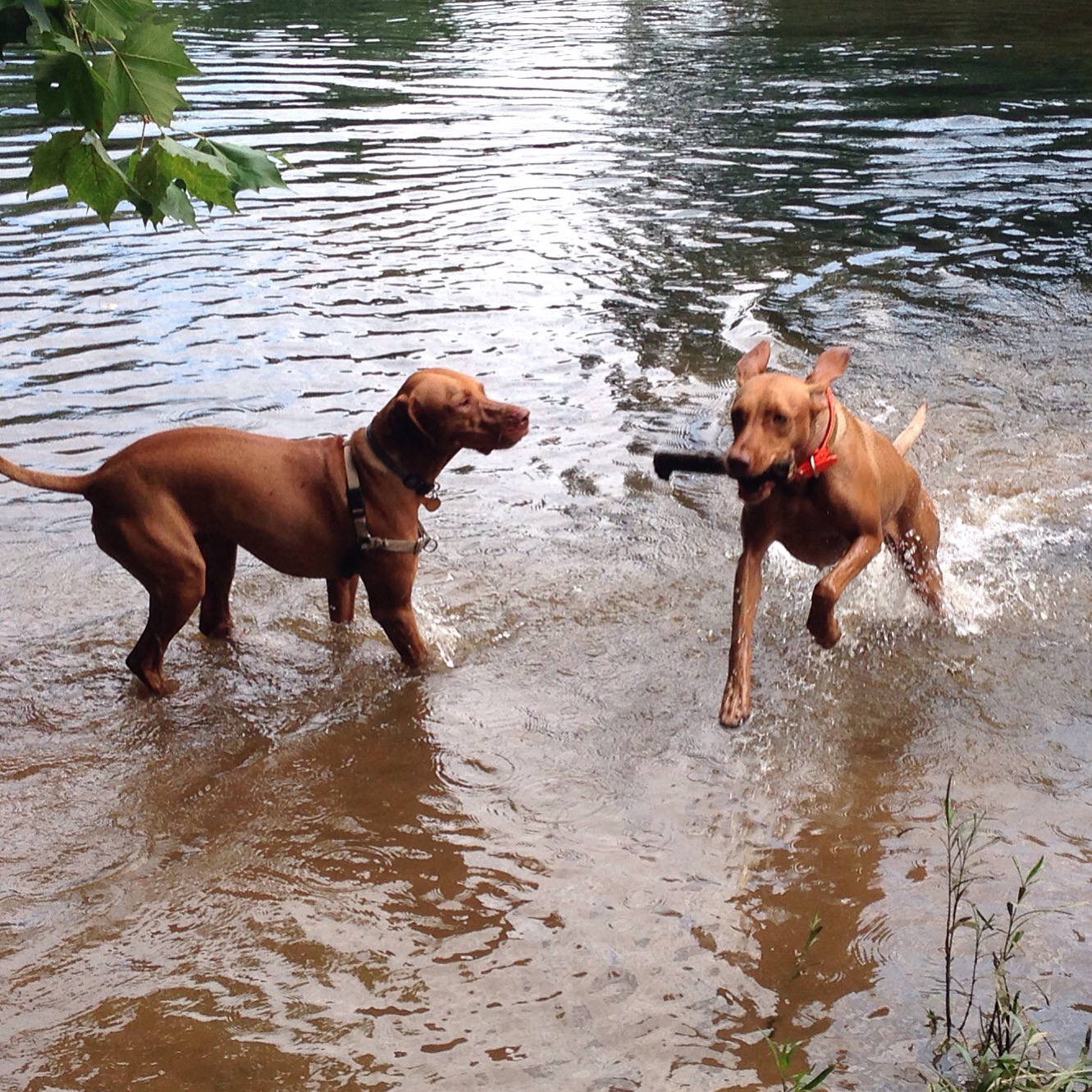 This past weekend was my 30th birthday so Chris, Zara, and I went to Charlottesville, VA for the weekend. A lot of places in Charlottesville are dog-friendly, so we figured we’d be okay taking Zara with us. We stayed at the Hyatt Place, a nice, modern hotel in the newer part of the town. It was Zara’s first time in a hotel. She quickly made herself at home on the bed and was enjoying the view out the window. Our room overlooked the entrance of the hotel, where people were unloading their cars. She saw one group getting out of their car and she got really excited because she thought they were coming to visit her! Whenever we’re at home and someone pulls up outside, she goes crazy until we let her outside. At the hotel, she ran to the door, wagging her tail and about to bark before I quickly distracted her with a toy. 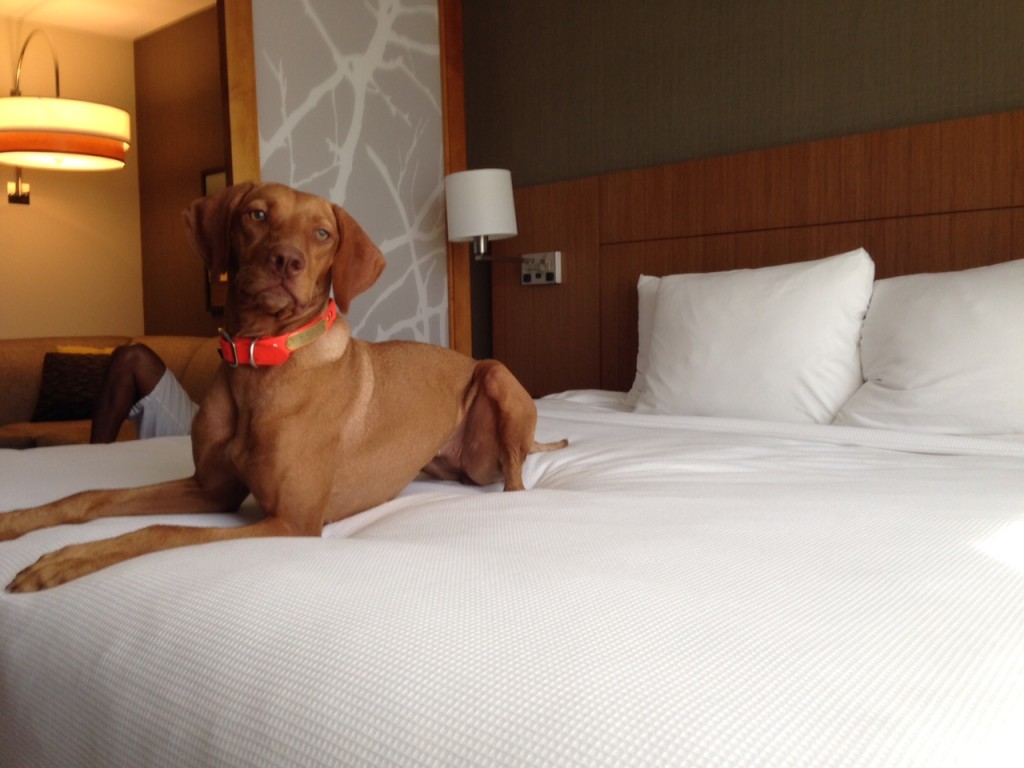 Chillin’ on the hotel bed 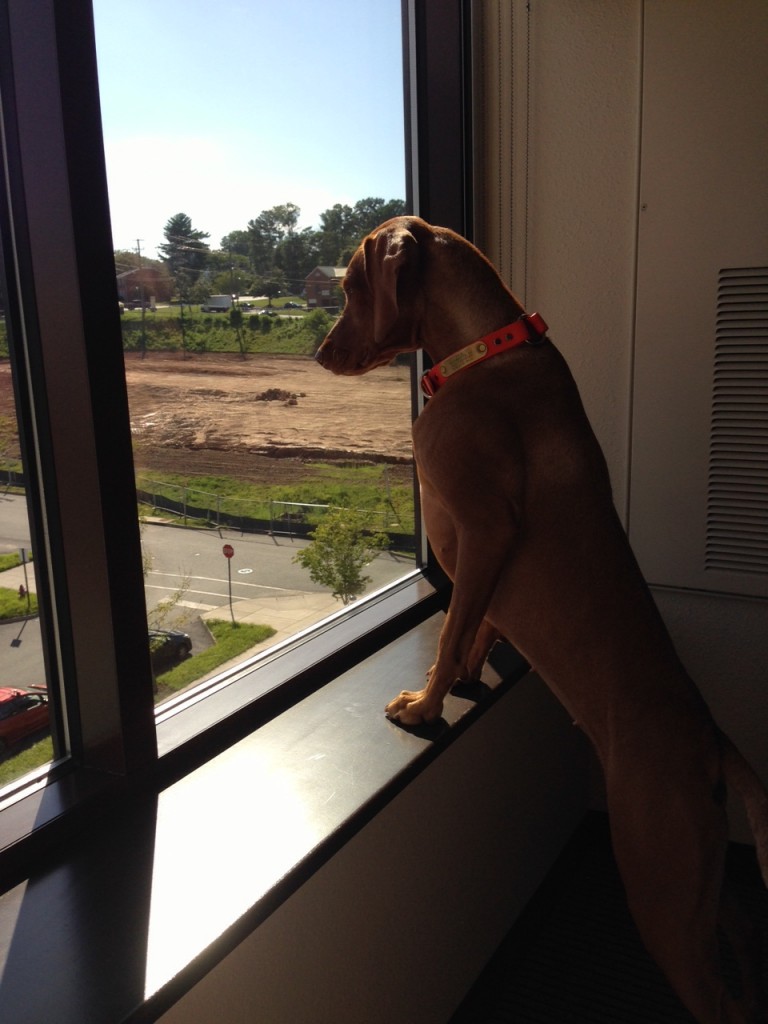 Hmm…are those people coming to visit me?!

She was also more on-edge the first night than I anticipated. Any time someone walked by in the hall or made some noise outside the room, she barked. We had to scold her multiple times around 10/11pm for barking. I was worried that someone was going to complain. Thankfully, she slept through the night without incident.

As part of my birthday surprise, Chris had invited our friends Dave and Erin to come along with us and they brought along their dog Jax. Our other friends Kelli and Andy joined us on Saturday. On Friday, we walked around the campus of UVA for a while, with Dave and Erin playing tour guide, since they are alumni. It was very hot and Zara kept pulling on her leash. The university grounds were quiet beautiful. Afterward, we had dinner at the downtown mall area of Charlottesville and brought the dogs. Zara must have gotten tired from all that pulling and the heat because she was pretty good throughout the dinner. Other times we’ve had dinner and haven’t been able to enjoy it because she has been super antsy and yelping much of the time. 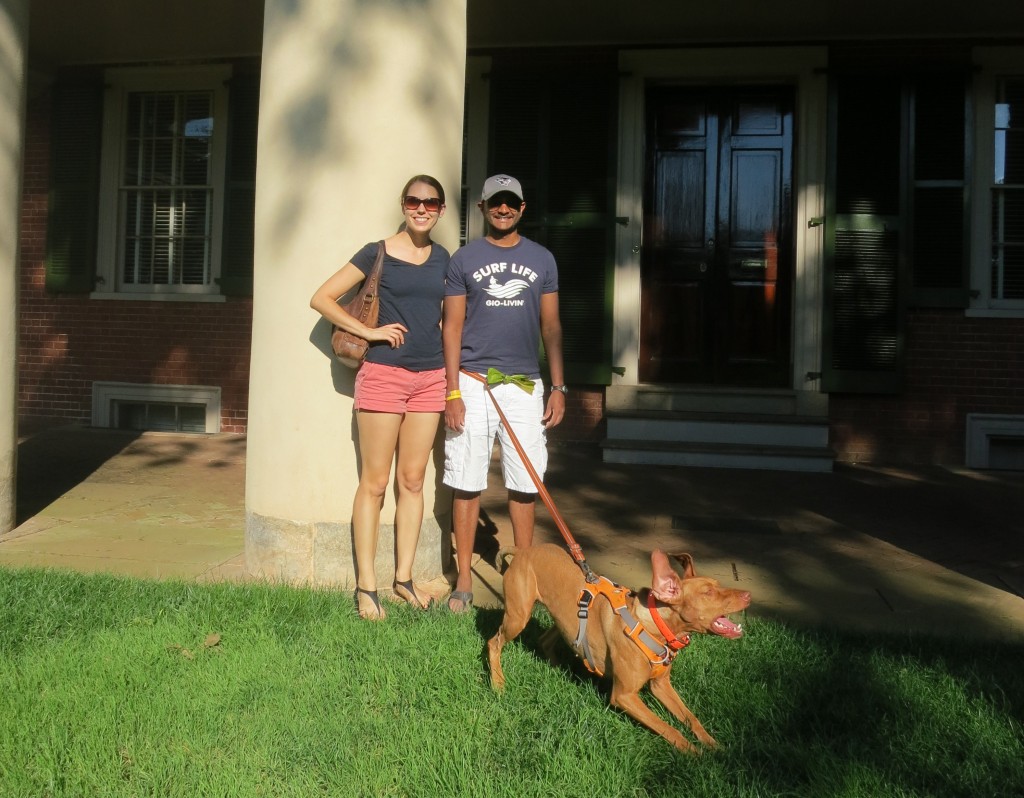 On the lawn at UVA…Zara wasn’t too happy about having her photo taken. 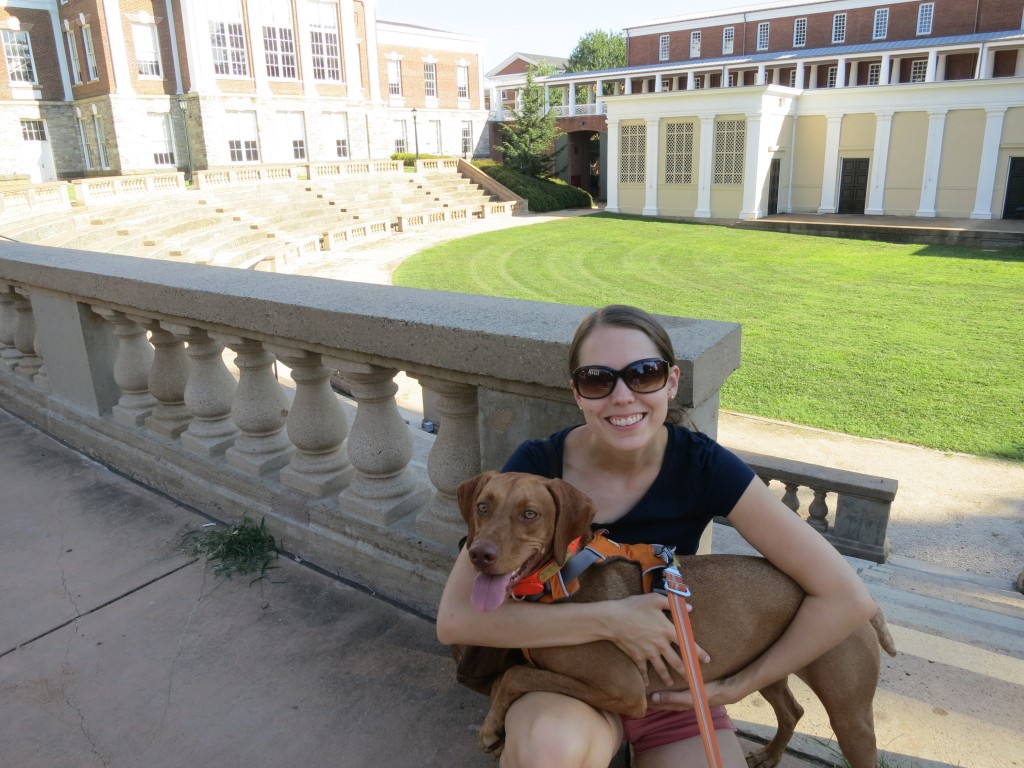 On Saturday morning, I had arranged for us to meet up with Remmy, one of Zara’s littermates and his owner, Rachel. They live in Charlottesville. I was so glad it worked out because we hadn’t seen them since they puppies were 8 weeks old. Rachel has us meet at her friend’s 100 farm property and it was basically large open fields with access to a stream.

Zara was super excited to see Remmy, but she acts that way pretty much every time she meets another vizsla. Remmy had his tail between his legs which Rachel said she had never seen before. We thought maybe he acted that way because Zara was one of the larger puppies in the litter and Remmy was one of the smallest, so maybe Zara bossed him around when they were babies and he remembered that. Either way, he warmed up to her quickly. Soon enough, they were sprinting around the farm like a pair of racehorses.

We stopped to let them swim in a stream that went through the property. Zara is much more confident in the water than Remmy is but they have other things in common. Apparently Remmy also chases lights and shadows, which was somewhat comforting to hear. Rachel also said he is a big leash puller which is definitely something he shares with his sister. However, she did say that he is usually asleep by 7pm each night which is NOT the case with Zara. Then again, after seeing how much they ran on the farm, I think Zara would be asleep by 7pm each day if she had access to land like that! I was joking to Chris that we need to buy a 100-acre farm for Zara. 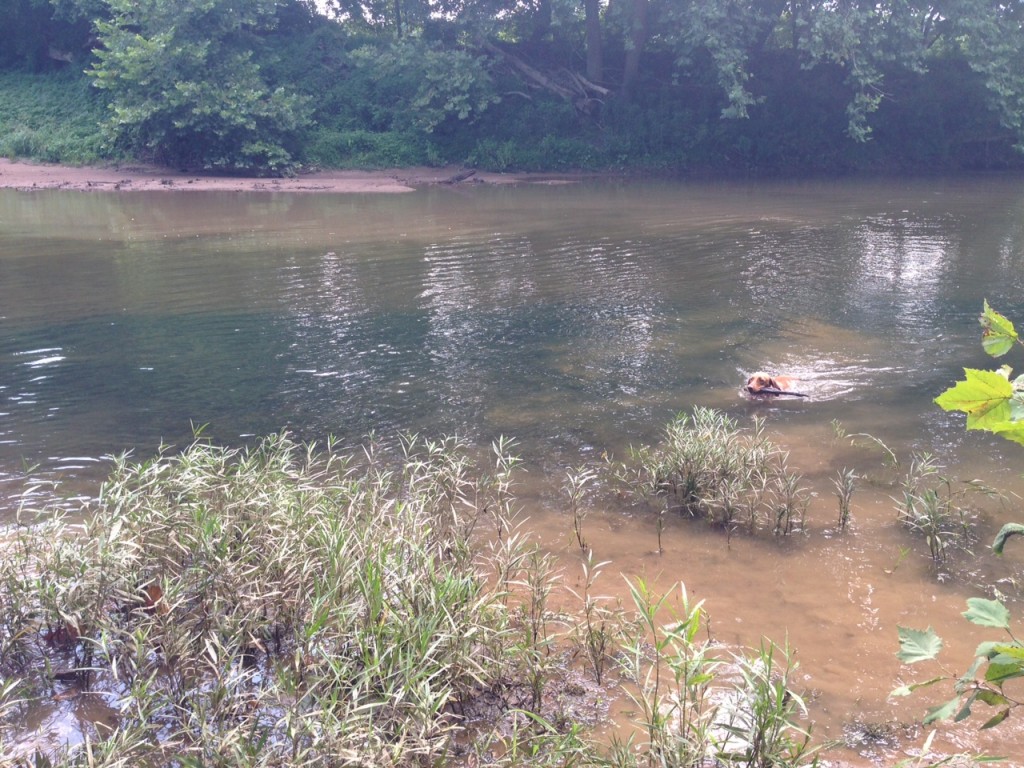 Zara swimming in the stream 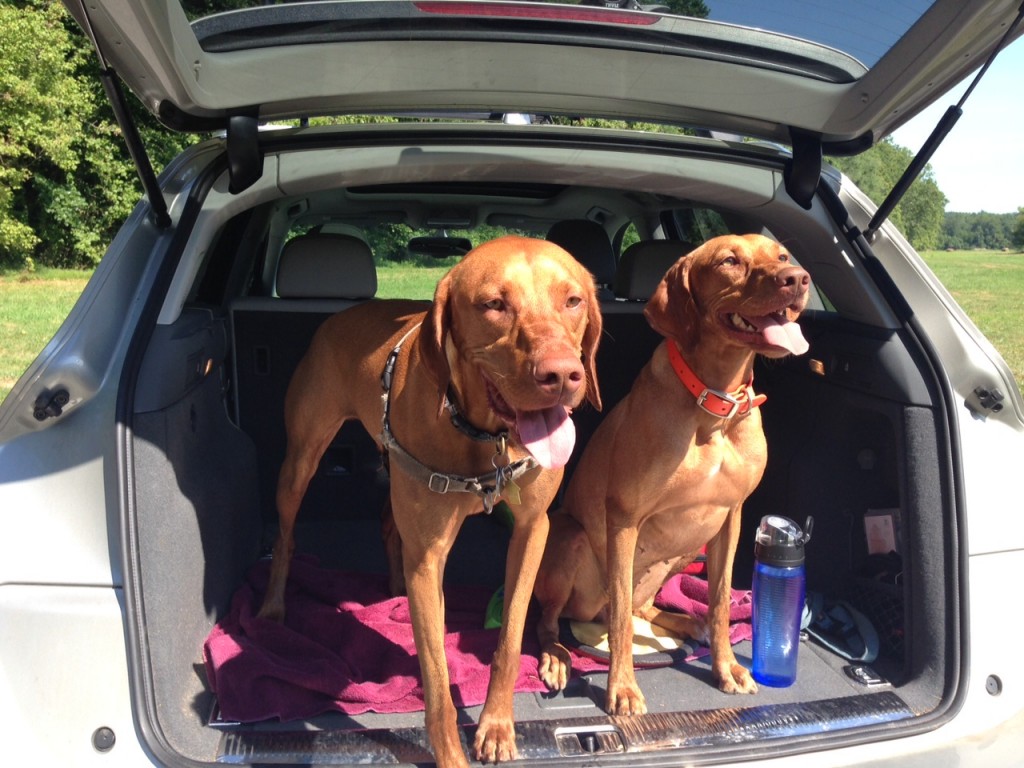 After the meet up we headed back to our hotel. Chris had planned a wine tour for us and our friends and we were able to take the dogs too. We went to two wineries, a distillery, and a brewery. They were all dog-friendly. The first winery, King Family, was set on a gorgeous plot of land with the Blue Ridge Mountains in the backyard. They had a ton of open space and it was tempting not to let Zara and Jax run around off leash. But unfortunately none of the places allowed that. Thankfully Zara was very well-behaved the entire day. When we got back to our hotel around 5, she was just exhausted. We went out to dinner again on Saturday night but left her in the hotel room with Jax. I doubt either of them made a peep! 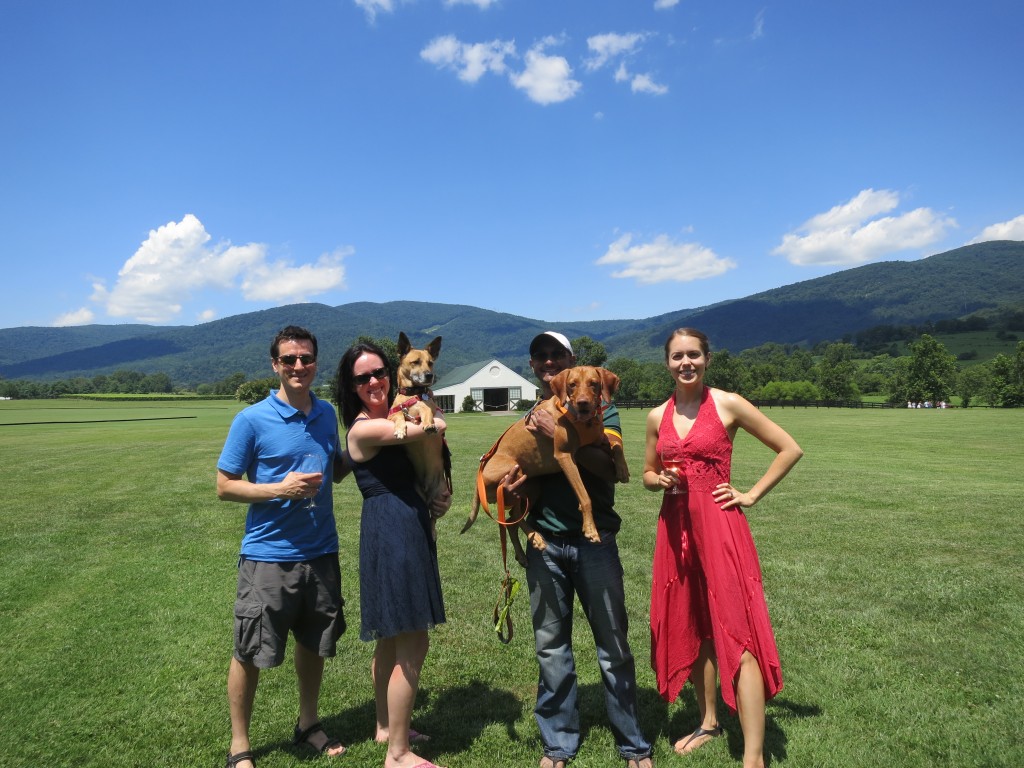 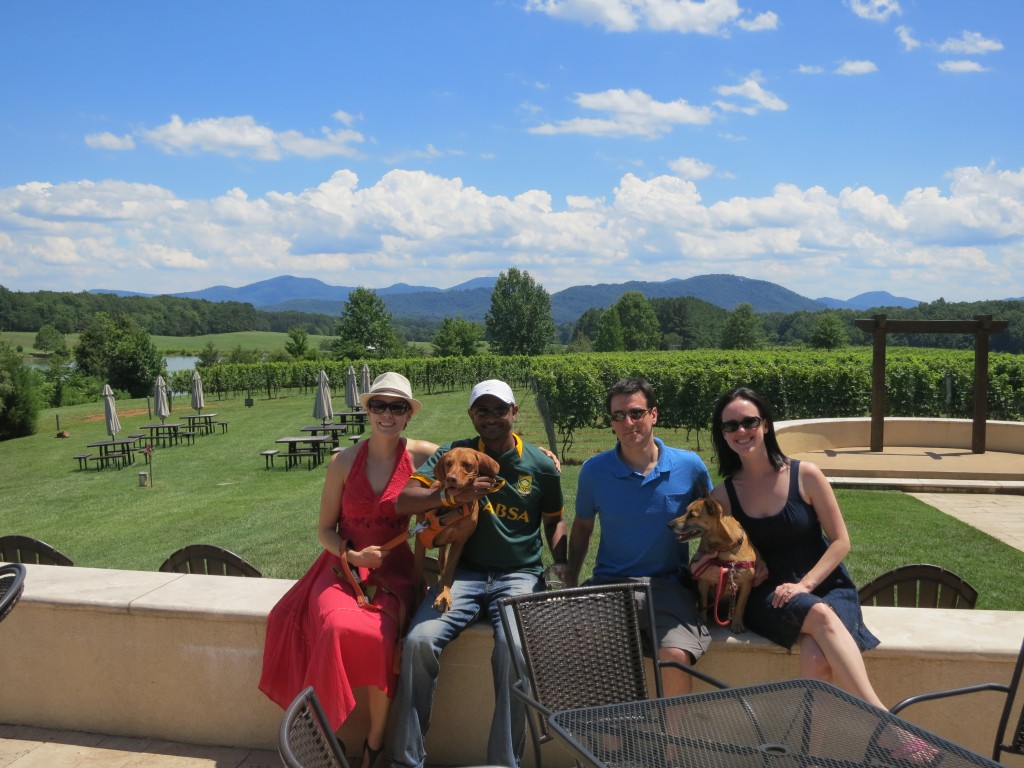 Other vineyard…I forget the name. 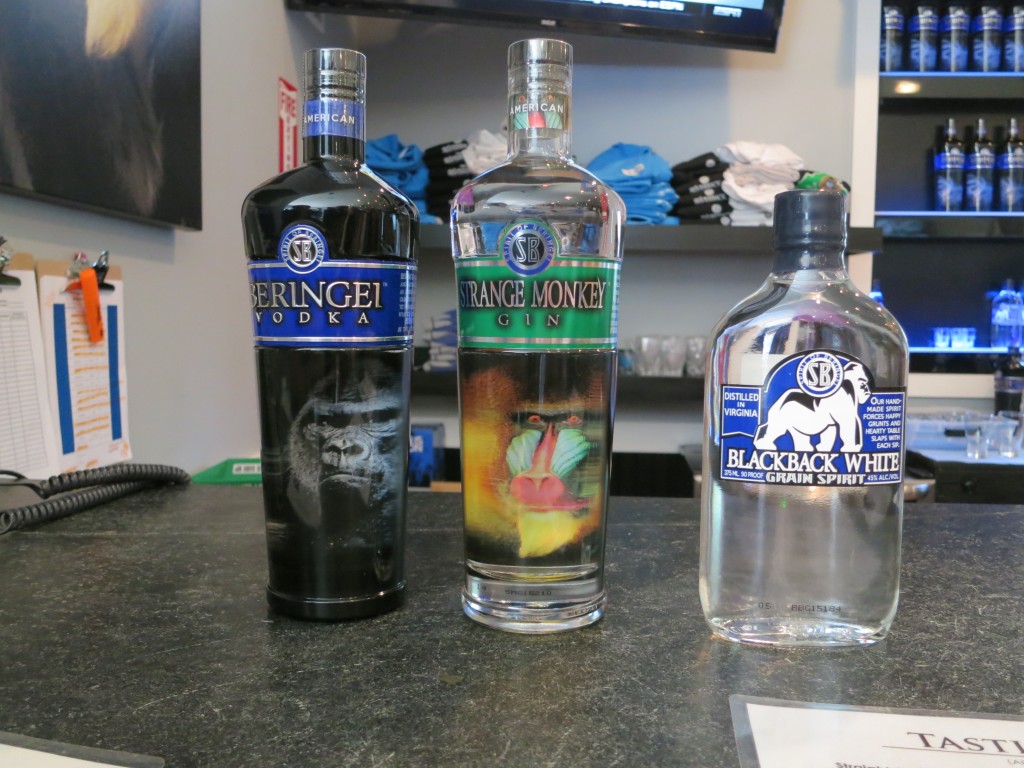 Tasting at the Silverback Distillery 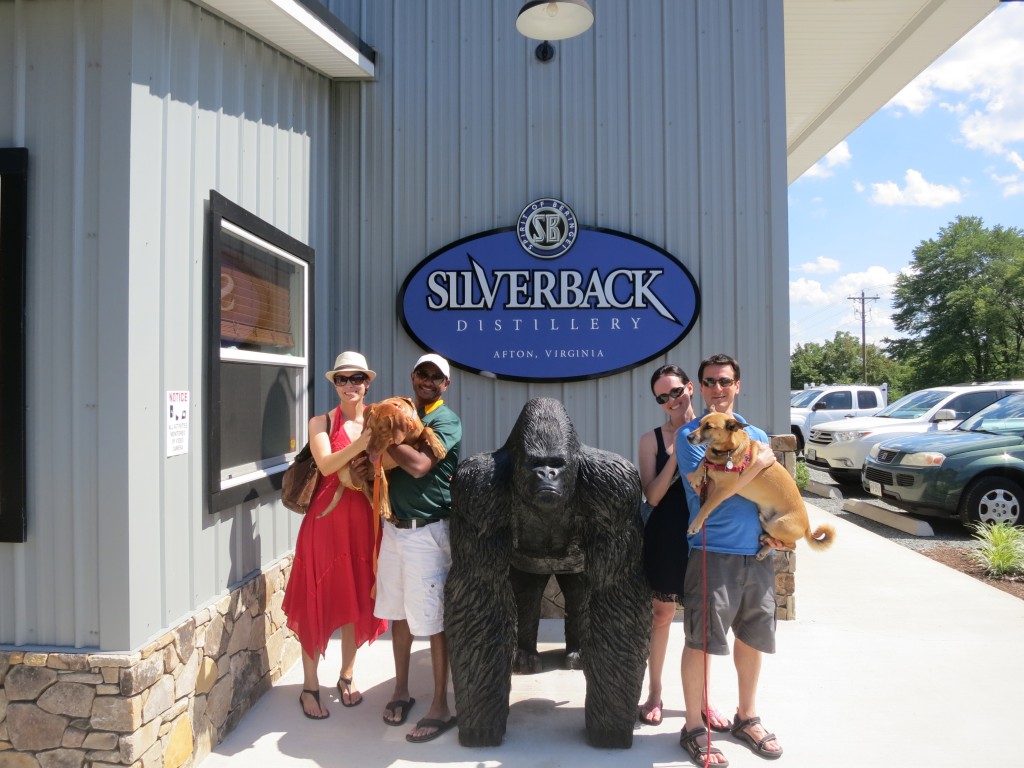 Silverback…named after the gorilla. Sadly you couldnt sit on him

We drove back to DC on Sunday morning. It was a really nice weekend away. The combination of running with Remmy, being out all day Saturday, and the new sights and smells took a toll on Zara. I think she was still tired on Monday from it all! Now she’s back to her normal energetic self of course. Until this weekend’s adventures…;) 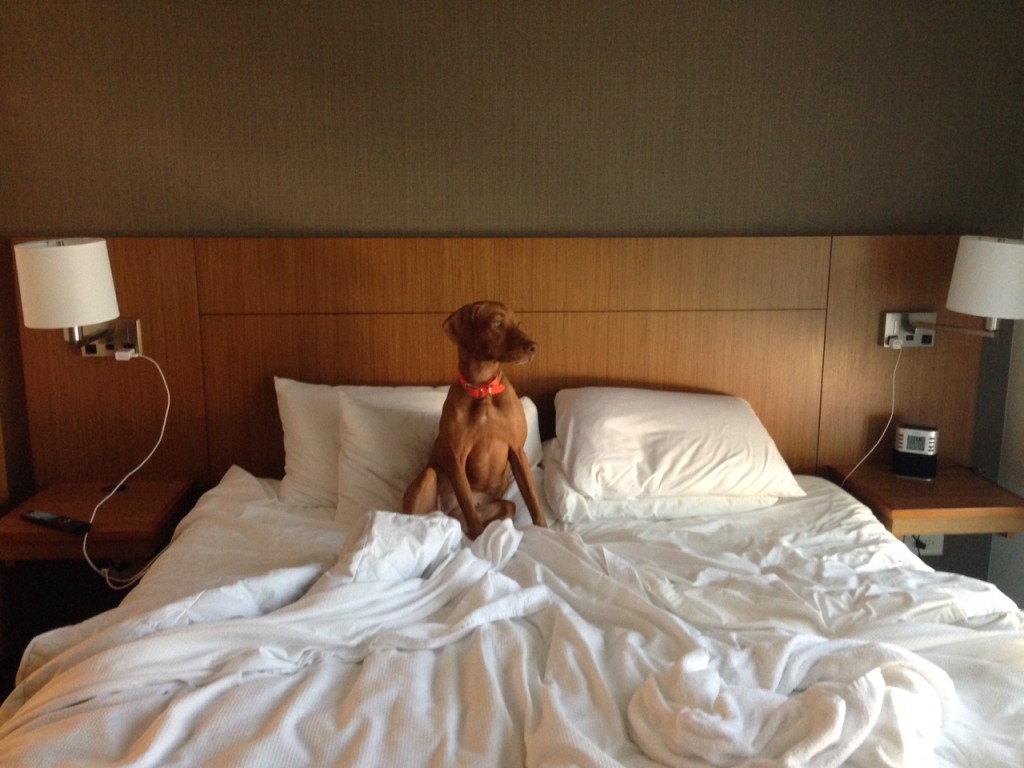 Zara: I could get used to this hotel life…