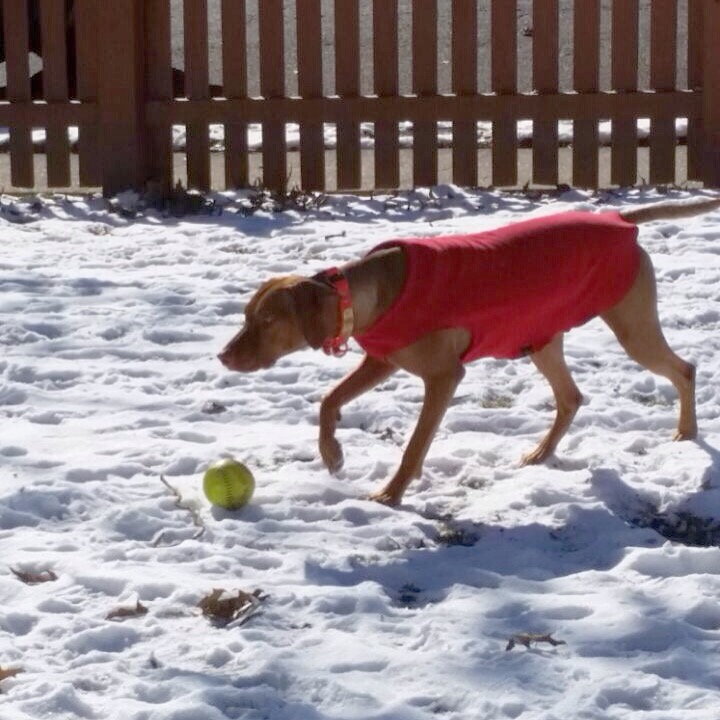 Winter has officially struck in the DC area. Leading up to Christmas and New Year’s, the highs were in the 40s and 50s. I think the high on Christmas Day was 55. However, December weather can be very deceptive around here. Mild days like that make winter seem manageable but then as soon as January hits, the cold locks down and winter is much more intense.

This past week was like that. I don’t think any of the highs were much above 35 and several nights got down to 10 degrees. I realize this is nothing compared to the very low negative temps that are common in the northern US but for a DC-area resident, it’s pretty cold. Unsurprisingly, Zara is not a fan of the cold. I don’t think most vizslas are, because of their short coats. But I think Zara is okay being outside until the temperature drops below 32 or 30 degrees.

Last Wednesday (the coldest day last week), I was working at home and took Zara out to play for a little while during my lunch break. It was probably about 25 degrees and I put her fleece sweater on. I was throwing the ball for her in the backyard and she was running after it. However, after 15 minutes, she left me. I went to the front yard to see where she was and she was standing by the front door, waiting to go inside. This is very uncharacteristic of her – she NEVER is the one to stop playtime!

Later, at the dog park, we had the same situation. By this time, it was 19 degrees. Zara played with her ridgeback puppy friend for about 15 minutes and then she was ready to leave the dog park. She was standing by my legs, shaking.

She doesn’t seem to mind the snow, though. Granted, this is not her first time seeing snow. In fact, when we picked her up from our breeder last December, there was snow on the ground. I think as long as it’s not super cold, she doesn’t mind romping in it. On Sunday, we went on a hike with another vizsla named Lily (not her sister) and her parents whom I’ve met through Instagram. The trail and forest was still pretty much covered in snow and Zara and Lily had no problem running around.

I’m actually kind of hoping for a blizzard or big snowstorm this year so we can see how she handles a large amount of snow. :)