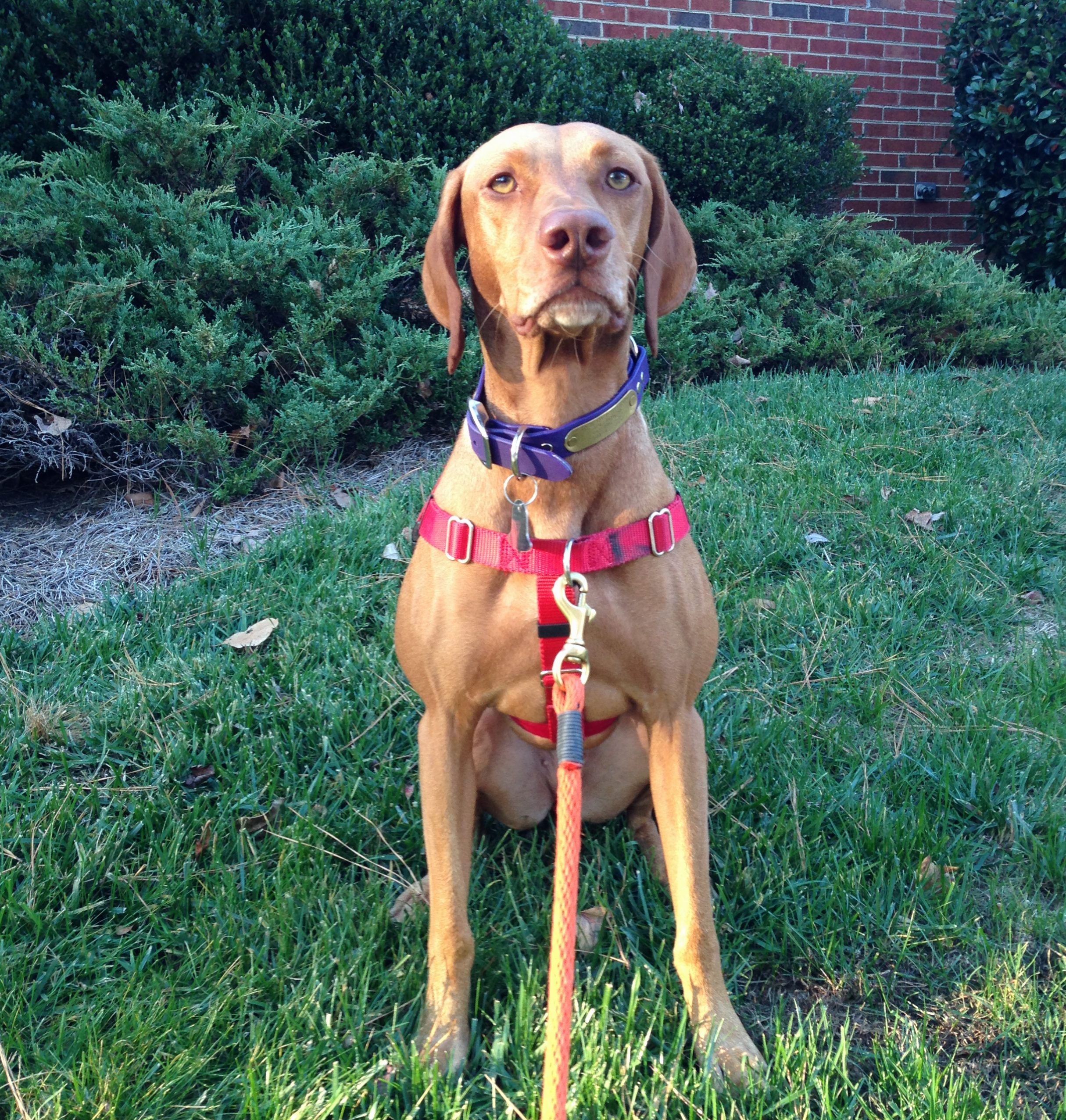 Zara and I passed her therapy dog certification this past weekend! We met at a local nursing home on three consecutive days to be tested by an evaluator. The woman who worked with us, Susan, was very nice and helpful. 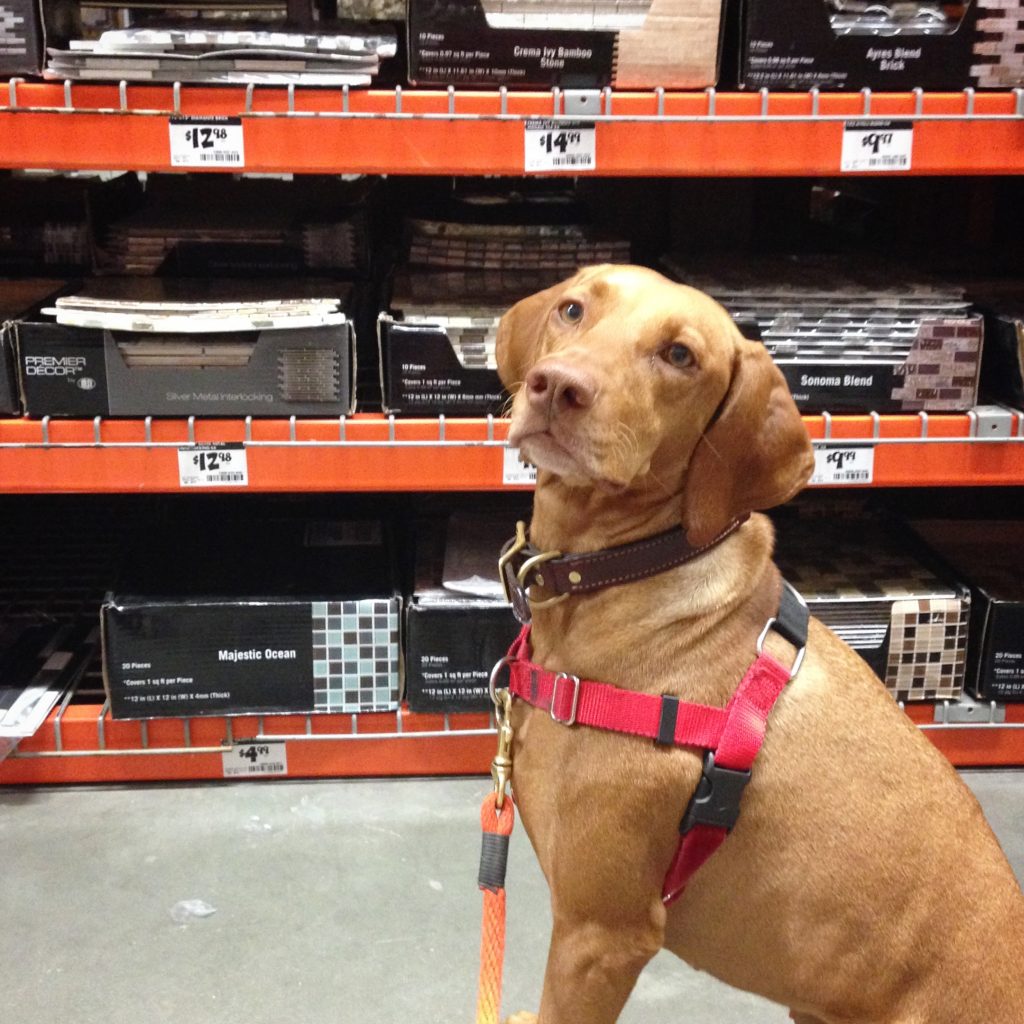 Practicing being a good girl and greeting people in Home Depot a few days before the test.

There are many different organizations that certify dogs to become therapy dogs, depending on where you live. We chose the Alliance of Therapy Dogs (ATD).

Getting certified involved three observations over a three day period to get a feel for how the dog (and human!) respond on different days and different times. We met Susan, an evaluator for ATD at a local nursing home on Saturday morning. Another woman and her Bichon were also getting tested. They were in our Pet Therapy class as well.

The first part of the evaluation was a handling/obedience test outside before we were allowed to go inside the nursing home. Susan touched Zara on her head, back, lifted up her paws and felt her tail. Then we demonstrated her loose-leash walking, turns, and reaction to a neutral dog. I have struggled walking with Zara for a long time. She loves to pull. Thankfully, ATD allows the use of a harness for therapy dogs, so I had the Freedom harness on Zara with the leash clipped in the front. That gives me more control over her than if I was just walking her on the collar. Zara passed the loose-leash walking part. She may have been pulling a little, but I think the test is mainly to see if the owner has control over the dog. Since I was in control, we were good to go. :)

After a while, we went inside the nursing home and sat in the reception area for a bit so Susan could go over some of the rules and regulations. Zara was pretty calm during this part – she laid on the floor. We had been at the dog park right beforehand, so she had gotten a lot of her energy out there.

As people walked by us, Susan encouraged them to pet Zara and Gabriel (the Bichon). Zara was happy to greet people and receptive to petting. She was not afraid of the wheelchairs or walkers at all.

Eventually, we went inside the health care facility part of the nursing home and visited with a bunch of elderly residents. Most of them were sitting in wheelchairs or on couches watching TV. Zara did well during this portion, although I need to work on some positioning commands. We practiced getting our dogs to circle up next to a wheelchair during class but Susan recommended also teaching them a command to back up, so I can back Zara into a small space, between two wheelchairs, for example.

After visiting with that group, we walked around and went into the courtyard of the building. It was just our luck that they have a pet rabbit that lives out there and Zara was ready to hunt it as soon as we got outside. I had to pull her away and try to refocus her attention on the people who were sitting outside.

That first visit went really well and we were able to come back for the second visit, on Sunday at 4pm. That one did not go quite as well. Zara was still friendly and behaving herself for the most part, but she was distracted. After we visited some people in their rooms, she started whining and pulling me down the hall. I was wondering why she was doing this, and then I realized that she remembered the rabbit from the previous day and wanted to go hunt it. Needless to say, she was not particularly interested in visiting with the elderly people.

Later, when we were sitting in the reception area reviewing some things, she was also very whiny. I think the 4-5pm time was not as good for her as the morning. She had just gone for a run with Chris prior to us heading to the nursing home and since she usually eats dinner around 5pm, I think she was hungry. She is very aware of our typical schedule and she becomes very annoyed if she doesn’t eat on time. I get hangry too if I don’t eat, so I can understand.

Our final visit on Monday was at 7pm. Beforehand, I made sure Zara had gotten enough exercise AND eaten her dinner. This one was definitely better. She was not looking for the rabbit and was more interested in greeting people. Susan noticed on Saturday that Zara seemed to prefer interacting with men more than women. I watched for this on Monday and it did seem to be true.

We went into more residents’ rooms on Monday evening because they were getting ready for bed. Some of the rooms Zara was hesitant to enter. Susan said that it takes a while (even a couple of months) for them to get used to all the new smells and understand what they are supposed to be doing.

So in the end, we passed! I sent the paperwork in to the ATD headquarters and we should get my membership card and Zara’s tag in a couple of weeks. I’m really happy that we finally reached this milestone. I’ve been thinking about training Zara to be a therapy dog since she was a puppy so it’s been 2+ years in the making. I’m also really proud of her. A lot of people think vizslas are just crazy bird-hunting dogs, but this shows that they can be well-mannered and adaptable with the right training, socialization and exercise. :) 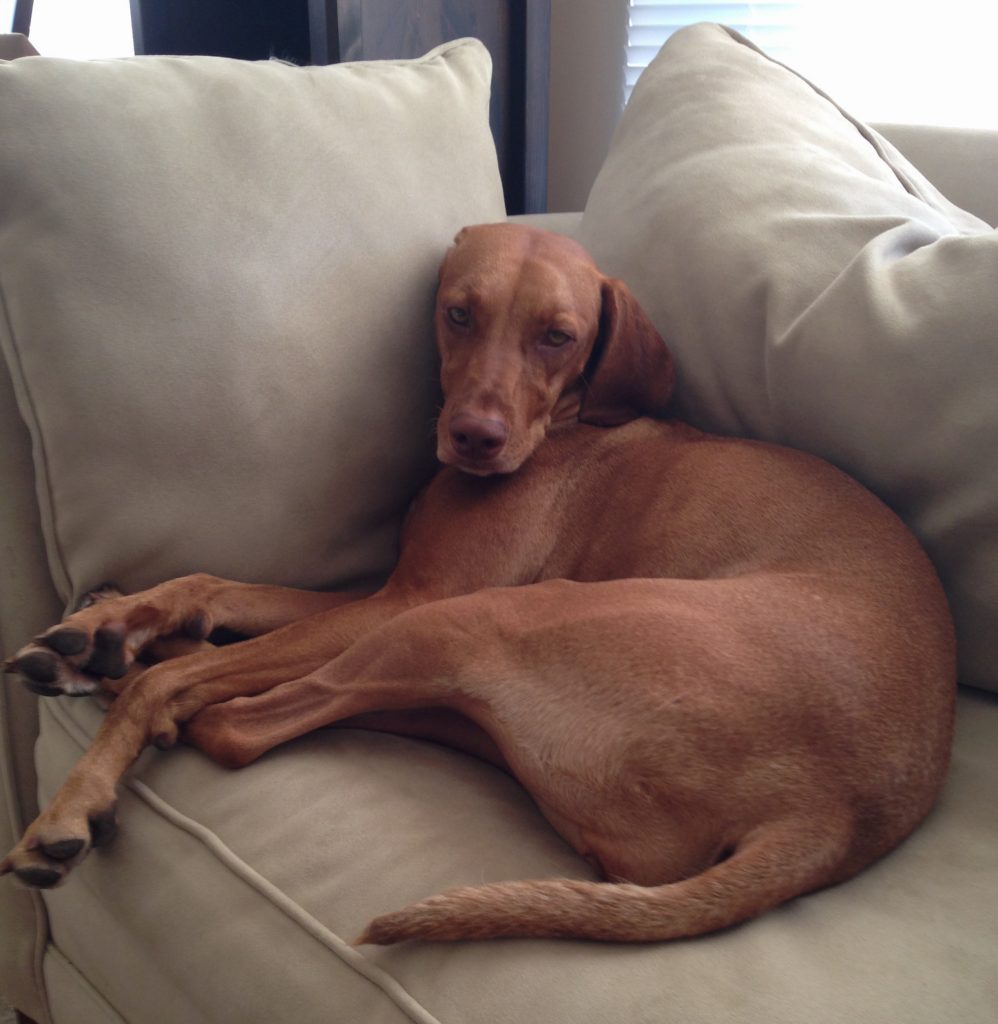 Being a therapy dog is tiring!