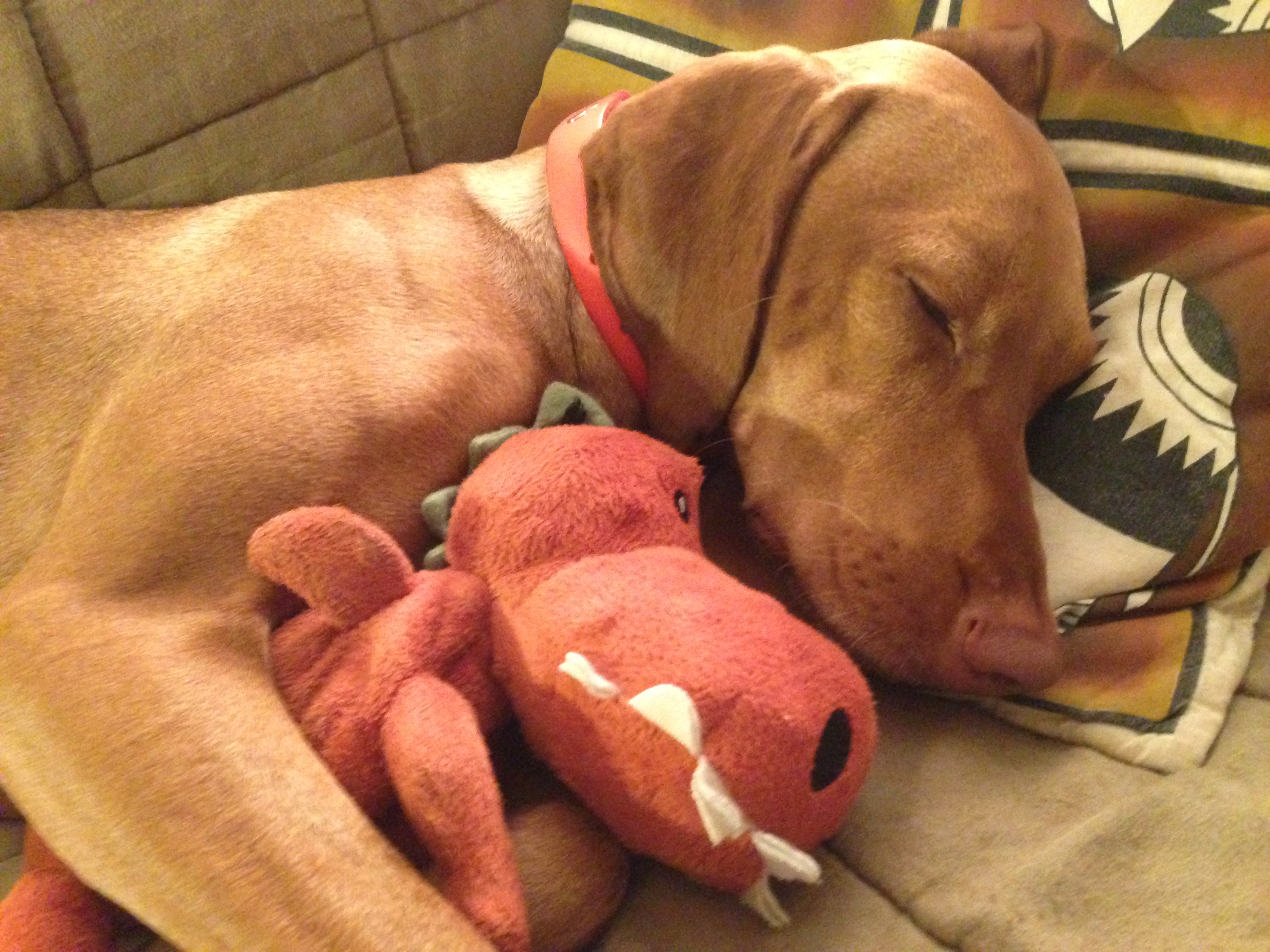 Many breeds of dogs are considered adults by the time they turn two years old, and with this comes less energy, more predictability, and a more mature disposition. But I had read –and heard– over and over again that vizslas don’t “settle down” until much later and many “act like puppies” until they are quite old.

When Zara was a puppy, we encountered a woman and her 11-year-old vizsla at the dog park. While the white-faced dog certainly looked 11, the fact that she was springing up and down next to her owner and barking incessantly to get the woman to throw her ball belied this fact. The owner laughingly told us that her vizsla had never settled down.

We took a training class when Zara was about a year old with a bunch of other dogs who were about her age or younger. “Just wait a year,” the trainer told us reassuringly. “The other side of two looks a lot better.” I remember thinking, Well that’s not going to be the case for us. We’ve got a vizsla. But when we were in Charlottesville this summer, visiting a brewery, we saw a couple with their vizsla, who was calmly laying next to their table in the grass. Zara, on the other hand, while fairly well-behaved during that visit, was typically unable to last through a meal at an outdoor restaurant without resorting to high-pitched yelping and crying. I asked the couple how old their dog was and they said he was about 2.5 years old. They told me that they had noticed a difference after he turned two – he did get a little calmer. That made me hopeful, but I still wasn’t expecting much to change.

And then, lo and behold, about a month after Zara turned two (her birthday is October 11th), I started to notice a difference in her behavior! I thought it was a fluke at first but it has turned out to be a lasting change. I believe she is actually calmer now than she was before she turned two. Now, this is not to say that all of a sudden I have a couch-potato dog who is content with a 30-minute walk around the block each day. No. She is certainly still an energetic vizsla. I notice the difference mainly in the evenings, in that she is quicker to settle down at night than she was before.

When I first noticed the change, it was a Monday night after she had been alone all day (Chris and I were at work from about 8am to 6pm and the dog walker came midday). Days like these, as opposed to days she went to daycare, or days when we worked at home, were always the worst, because she had so much extra energy and needed so much attention in the evenings. She typically would not lay down to rest or go to sleep until at least 10pm. But that night, after our normal trip to the dog park, dinner, a bully stick, and some playtime, she was asleep at 9pm. The reason I remember it so well was because this never happened!

The next day, Tuesday, she went to daycare all day. Even though she is active on those days, she is usually hyped up when she comes home and takes a long time to settle down. That Tuesday, she also calmed down sooner. The following day, I worked at home and she was also calmer in the evening. The pattern continued and I was cautiously hopeful that this was a permanent change.

Now that it’s been a few months, I think that her activity/rest cycle has shifted. Before turning two (or before this winter), she used to follow a cycle of activity, rest, activity, rest, stretching from the day into the evening. Now, I find that she is usually very active and awake during the daylight hours (with a few short naps/rests thrown in) and then very inactive/sleepy when it gets dark. This may be partially due to the time of year, so I’ll be interested to see what happens when the days get longer and there’s more light in the evening.

Also, I don’t think her capacity to be highly active has changed. By that, I mean while she certainly doesn’t need six hours of activity/exercise per day, if we took her on a six-hour (or more) hike or had her going all day long without sleeping, she could do it. She will go for as long as we will. But she will also quiet down when we stop.

But overall, I think she has gotten calmer, more predictable, and even sweeter (if that’s possible!) since she turned two. So if you’re reading this right now and have a vizsla puppy, rest assured that it can happen!