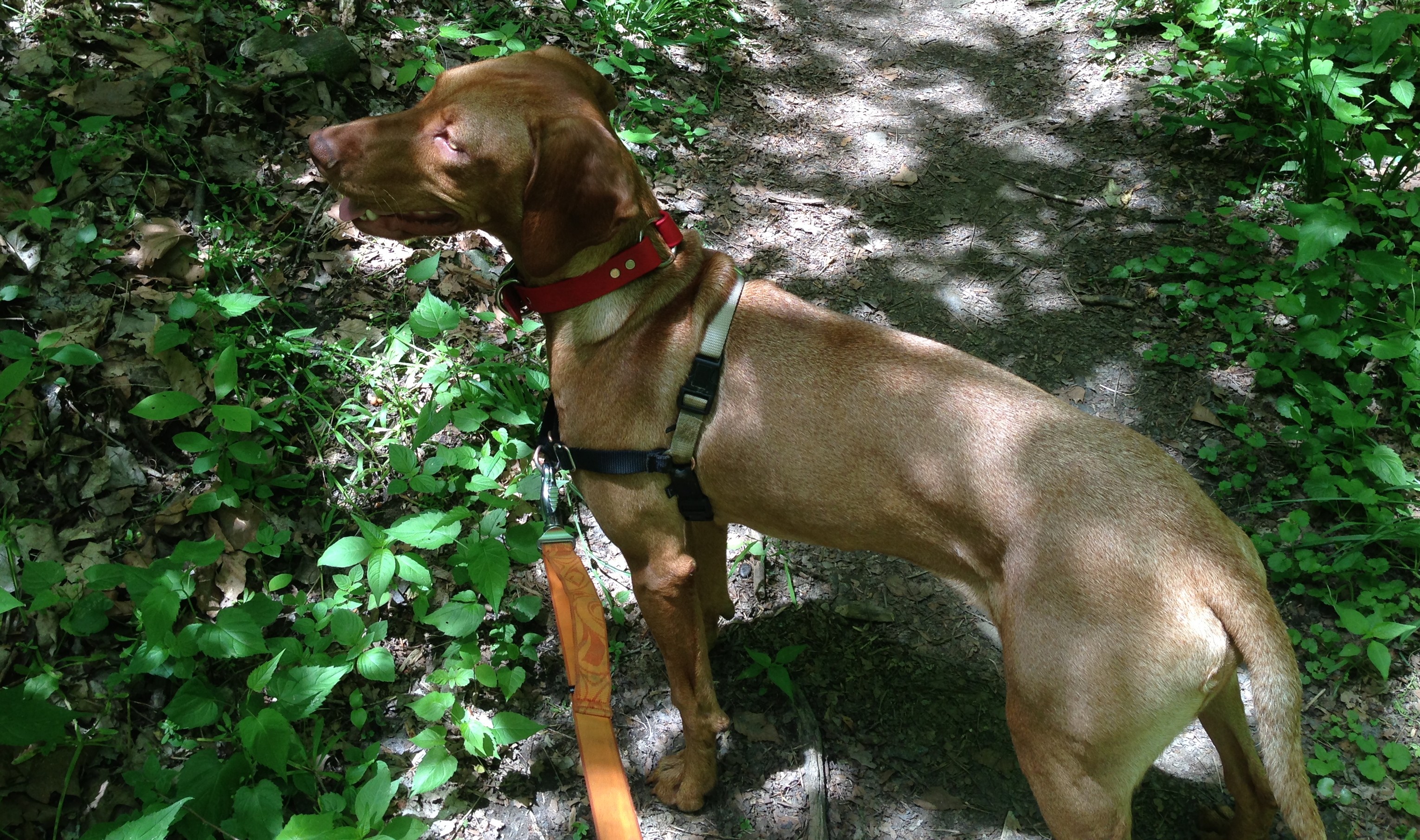 In January, I wrote my first post about loose leash walking. I was using treats to train Zara to walk by my side and to encourage her not to pull ahead. We started with the Easy Walk Harness then as well. Unfortunately, since then, we have not been successful in getting her to walk well on the leash. I think the problems started when she got all of her shots and I started taking her to the dog park in the morning instead of walking her. Since we cut down on the amount of walking, she wasn’t getting as much reinforcement on how to walk properly. Back then, it was easy to restrain her from pulling ahead because she was only 20 lbs. or so. Now she is 42 lbs. and super strong.I can hold the leash and force her to stay at my side but she pulls almost constantly and it really hurts my hand. It has gotten to the point where I really dislike walking her.

If I had to do it over again, I would have never let her pull at all. As soon as she started pulling, I would have stopped walking to let her know that pulling is not an effective way of getting where you want to go. But, hindsight is 20/20, so at least now I know what to do if we ever get another puppy! We also bought a Gentle Leader head collar about a month ago and were hoping to have good results with that. Since the leash hooks under the dog’s chin, if they pull, it forces their head down and to the side, which is an uncomfortable sensation for them.

The instructions that came with the Gentle Leader explained it would take a while for the dog to get used to wearing it. I followed their advice and introduced it to her gradually, gave her lots of treats and used the clicker when she was wearing it, and have fed her meals while she is wearing it. She doesn’t mind it for a few minutes but then starts batting at it. We’ve tried short walks outside (using treats and the clicker) and she will walk okay for a bit but then starts sliding her nose and body along the grass, trying to force it off.

After she did this multiple times the other day while walking home from the dog park, I became very frustrated. Maybe she can learn to tolerate it if we devote more time to it but I did a Google search looking for advice. I stumbled across an article on the subject of heeling. Below is the technique it recommended:

1. Start walking with your dog by your side. Hold the leash at your belly button. To start, it doesn’t matter so much if your dog is right by your side. She can be in front you.

2. The key is to keep the leash free of tension. As soon as the dog puts tension on the leash, you stop, say “heel” and start backing up a few steps.

3. As you back up, the dog will come back toward you. Once she is at your side, praise her, and you can continue.

4. Repeat the stop, back up, and heel command every time the dog pulls. This will teach her that pulling means she doesn’t get to move ahead while keeping a loose leash allows her to move forward.

I tried this for the first time 2 days ago and she started to catch on right away. Almost as soon as I backed up, she would come toward me. She still was pulling quite a bit throughout the walk, so I stopped a lot, but I was excited by how she was responding. I didn’t even have any treats! We went on a quick walk again yesterday and I continued using the technique. Now the key is to be consistent, which I think is doable.

I had tried a variation on this technique a while ago, but instead of stopping and backing up when she’d pull, I’d turn around and start walking the other way. It was really inconvenient if you were trying to go anywhere, not to mention my neighbors probably thought I looked ridiculous. I think Zara was also confused about why we kept turning around. At least this new technique allows us to keep moving in one direction.