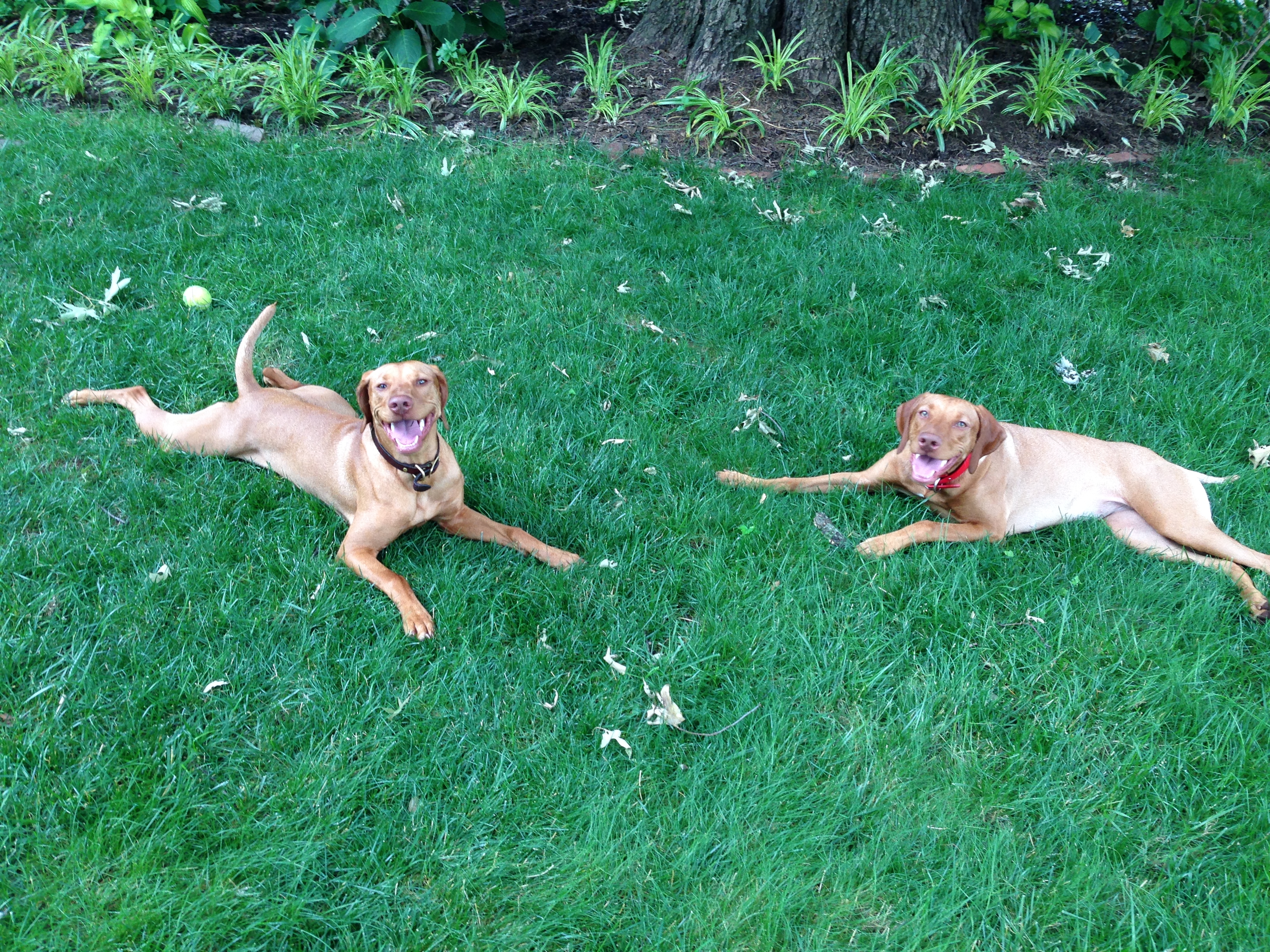 Zara had a very busy weekend because her littermate Lily came to visit! Lily’s owners had a wedding to go to, so we watched Lily from Thursday until Sunday. Zara and Lily were very excited to see each other and started playing right away. 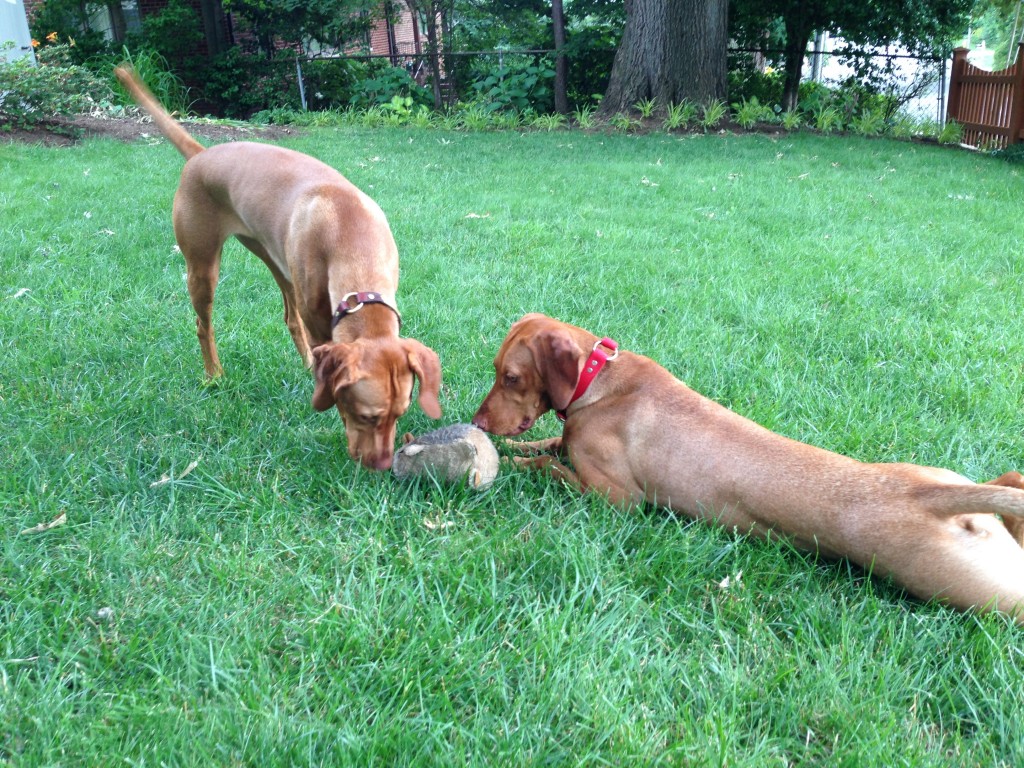 I’m very grateful that we now have a fenced yard, because Lily and Zara were running around like crazy outside! It usually began when Zara would start stalking Lily and then she would charge or Lily would run and they’d take off sprinting, hurtling themselves over bushes and through the plants at full speed. After a few minutes of that, they’d wrestle or one of them would grab a stick and taunt the other. The video below shows the madness.

Overall, they got along very well. Since they are sisters and the same age and size, I didn’t have to worry as much about one beating up the other or either getting too aggressive. Just as their play-fighting would start to escalate, they knew when to take a break.

We went to the dog park a couple of times to burn off some energy and everyone asked if Zara had multiplied (yes, I go to the dog park enough that everyone knows us). Zara and Lily actually didn’t play with each other too much at the park. Zara played with her friends and Lily kind of hung back and sniffed around. 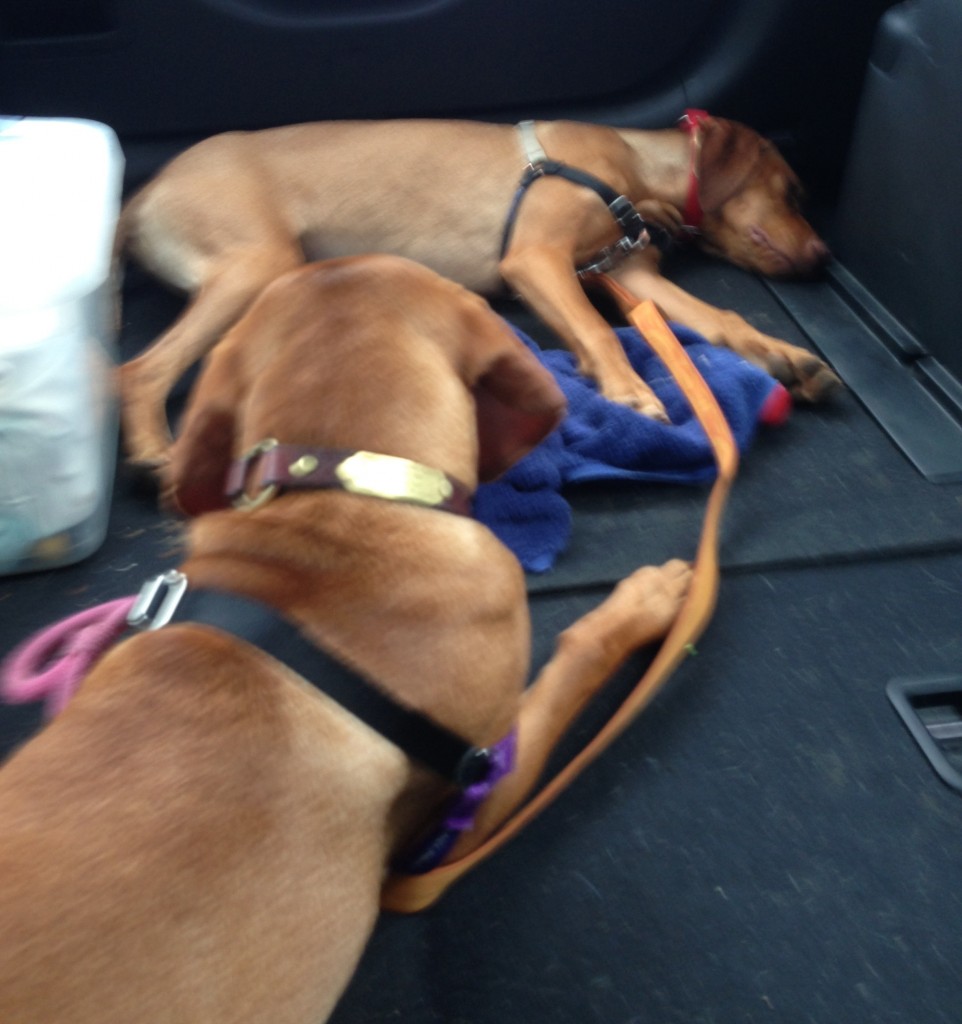 Passed out in the car on the way home from the dog park.

On Friday night, Chris and I took them to Shirlington where we met up with our friends Erin and Dave and their dog Jax. We had dinner at Capitol City Brewing Company, and all three puppies sat with us outside. Overall, they were well-behaved and lots of people came by to comment how cute they were.

I would have liked to take Zara and Lily hiking on Saturday but we still had to move a bunch of stuff from our old place so we didn’t have time. However, they had enough playtime to tire each other out. By 9pm last night, they were both passed out on the couch while we watched a movie.

It was interesting to see the similarities and differences between them. We noticed that Lily really seemed to like Chris. She would follow him around and sit next to him even when Zara was in another room with me. They definitely have a lot of the same mannerisms, though. 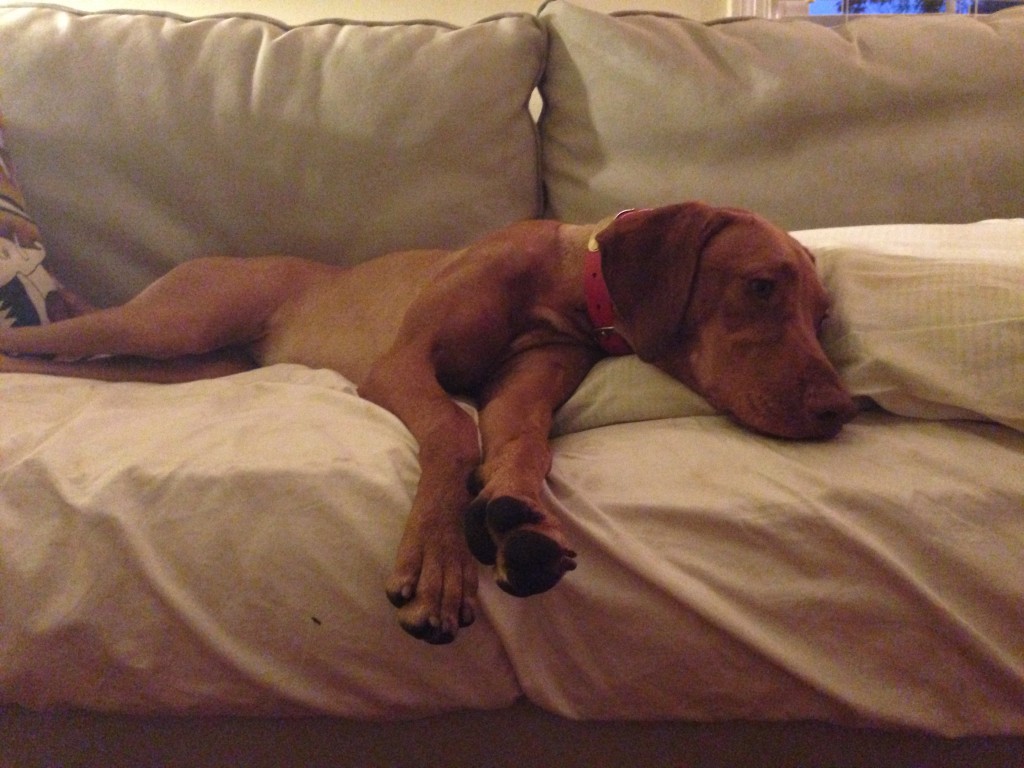 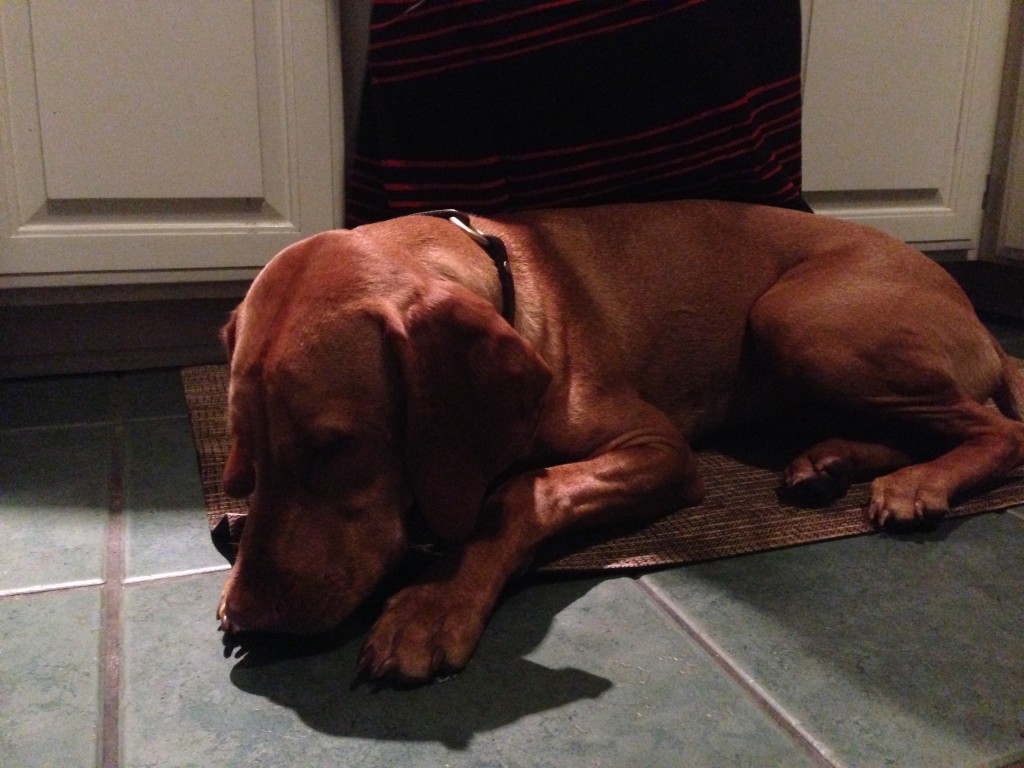 Lily sits at Chris’ feet while he does the dishes.

Although it was a bit overwhelming at times to have TWO high-energy vizsla puppies, we enjoyed having Lily with us and she looked like she didn’t want to leave when her parents came this afternoon! 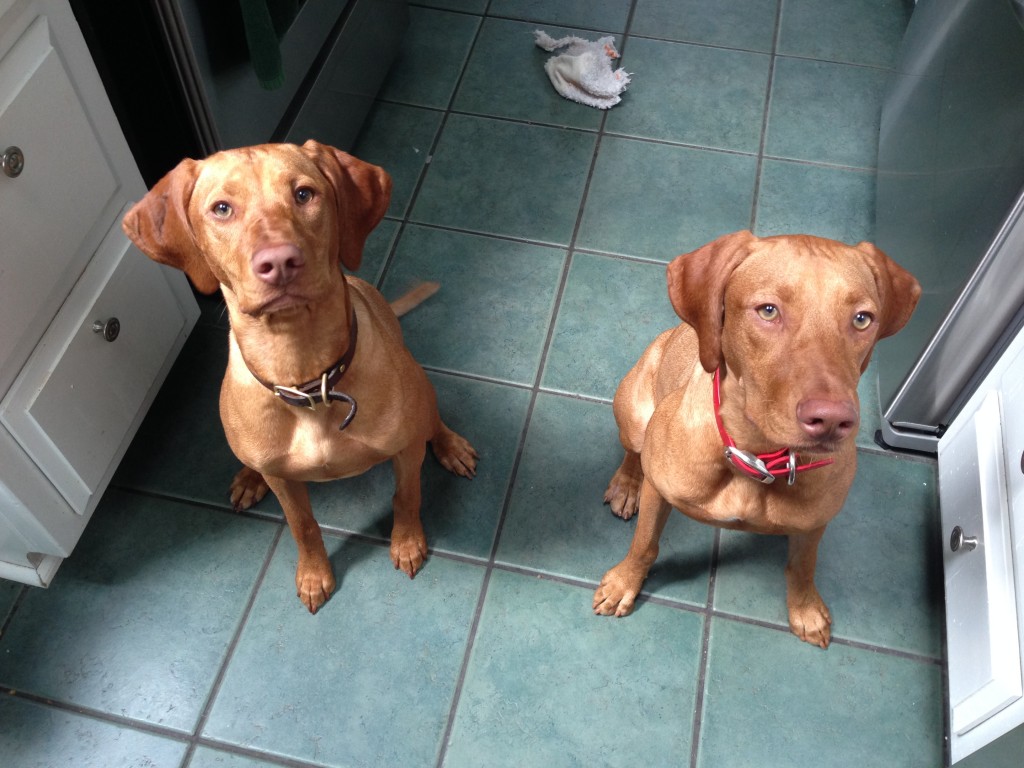 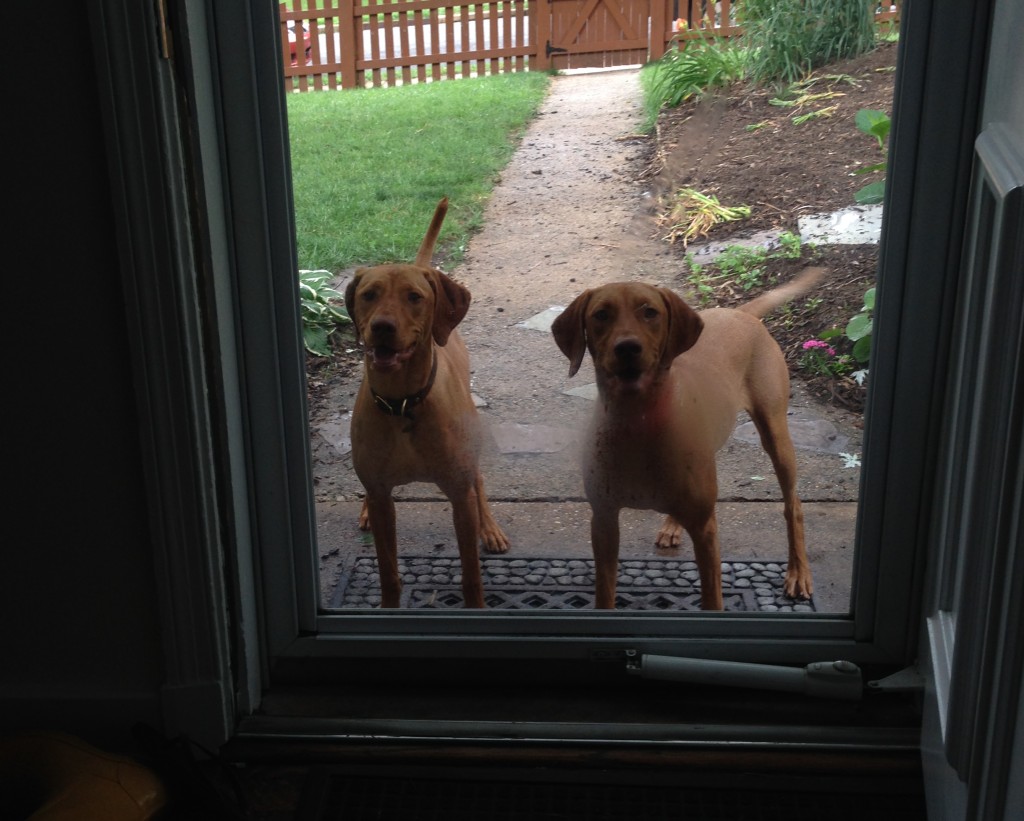