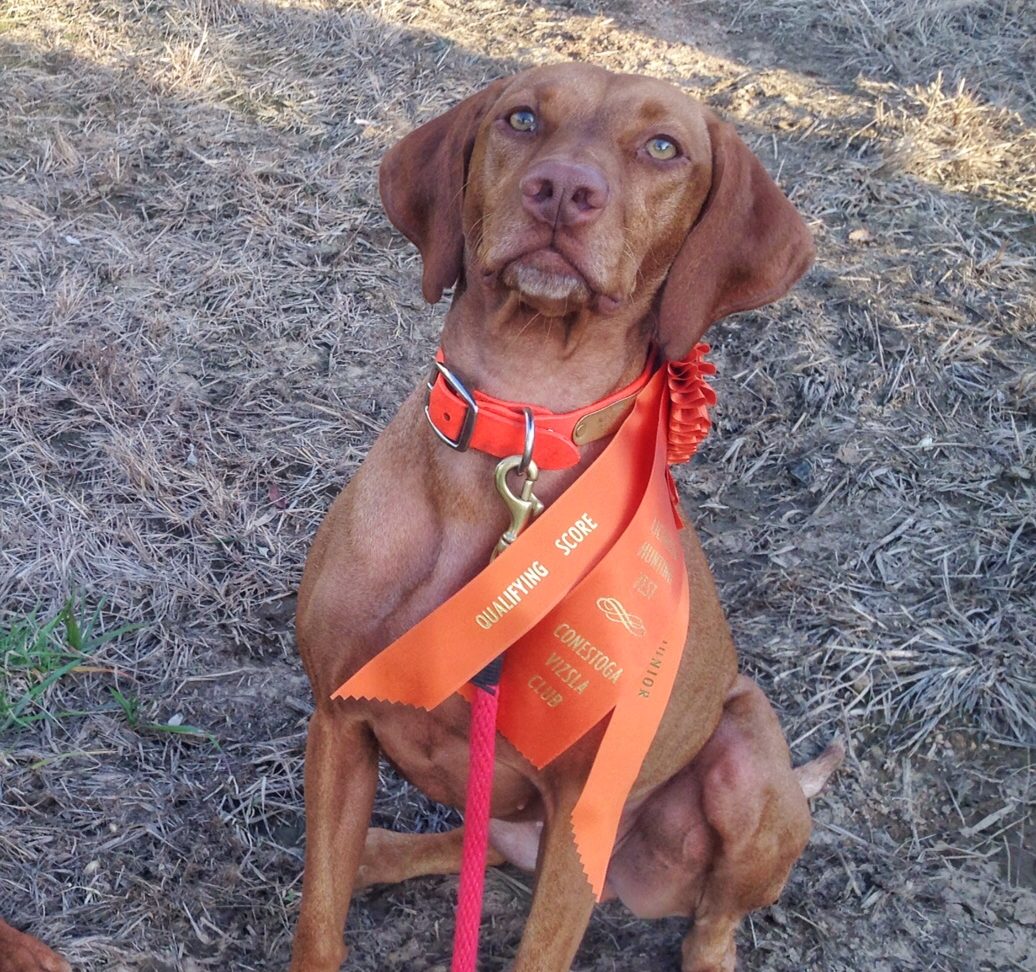 Last weekend was the Conestoga Vizsla Club’s fall hunt tests. Unlike the field trial we were at a few weeks ago, it was unseasonably warm! On both Saturday and Sunday, the high was about 70. It was definitely easier to be outside but I was overdressed on Saturday and got hot and it was a bit harder on the dogs to run. 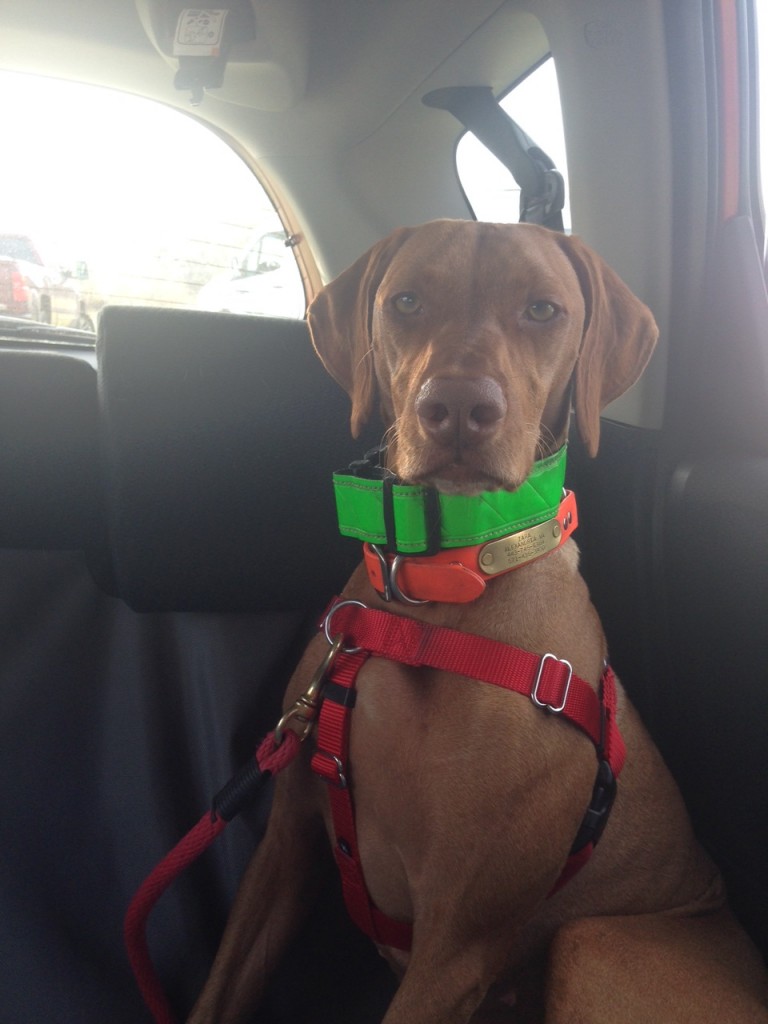 Zara was not a fan of waiting.

Zara did a great job. On Saturday, we had to wait a couple hours until it was her turn to run and she was getting very impatient. Our friends Alex and Pablo were there with their vizsla Archer as well. We hung out with them for a while. For her brace, Zara was paired with a 7-year-old vizsla named Gracie who actually already had her Junior Hunter title. She was competing to earn her Junior Hunter Advanced title, which I didn’t know existed. Her owner explained to me that after they earn the JH title, they have to get 5 more passes using the same criteria that they are judged on for Junior Hunter but they have to earn 8’s or above in all four categories. The categories are hunting ability, bird finding ability, pointing ability and trainability. This other vizsla blog explains more about ins and outs of hunt tests. Again, I wasn’t even aware there was a 0-10 scale for judging. But they have to get 5’s in all categories and at least an average of 7 to pass. So many new things to learn.

Anyway, after what seemed like forever, the judges were ready for us and it was Zara and Gracie’s turn to run. Both of the judges were on horseback and Zara was a little scared of the horses at first. She actually barked at them. She has met a horse before, but it’s been a while. I encouraged her to get in front of them and once she started running, she didn’t care about them anymore.

The course was a big field with areas of waist-high brush and sections that had been cut down. Zara took off and after a few minutes, found a bird! She pointed it and I attempted to shoot the blank pistol but again had trouble (sigh). The other handler shot his for me. Once the bird flew, Zara and Gracie took off toward it over a little hill. They were cutting through the course and the other handler and I were calling to them to try to get them back on track. They weren’t coming back, so the judges rode through the brush to see where they went. When they crested the hill, they called to us to hurry, that both of them were on point. The other guy and I tramped over there as quickly as we could. I saw them both pointing at a bird. The judges called it a “divided point” and were saying how beautiful they looked. We both fired our guns (I actually got it to fire!) and Zara and Gracie took off again.

Both dogs found another bird after a bit and then a fourth one at the very end of the course in the woods. It was cool because they were finding the birds together like they were used to hunting with each other.

Zara was hot and tired at the end of her run but she did look happy. When we got the score sheet back, I saw that we had gotten 10/10 on everything! Apparently that is uncommon because I heard from one of the judges later that he’d only given out one other perfect 10 score in the past five years. I felt really flattered and proud of Zara, especially since she hasn’t had much formal bird training and a lot of it was clearly her natural instinct. However, I can take some credit for the trainability aspect because it has to do with how well she listens to me and follows my commands. Zara and I have spent a lot of time with her off-leash in the woods or fields and she is used to being in front of me but also checking in and getting directional signals from me. It was nice to see that all my time doing that has paid off. 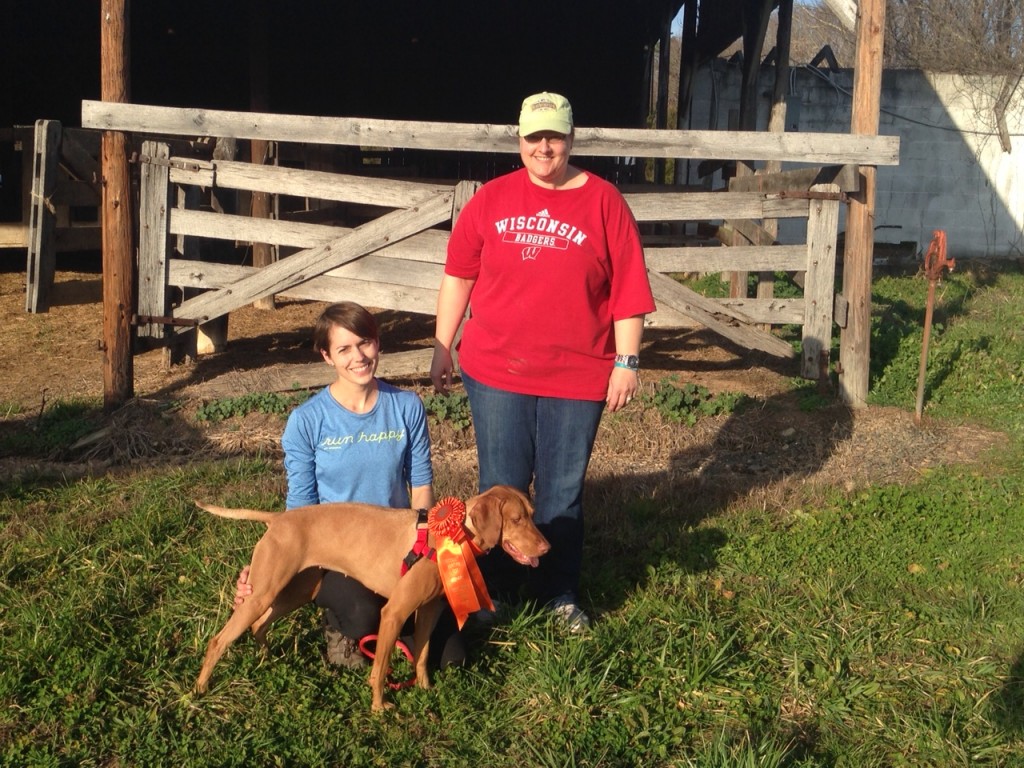 Jane and I with Zara wearing the ribbon for her first Junior Hunter pass! 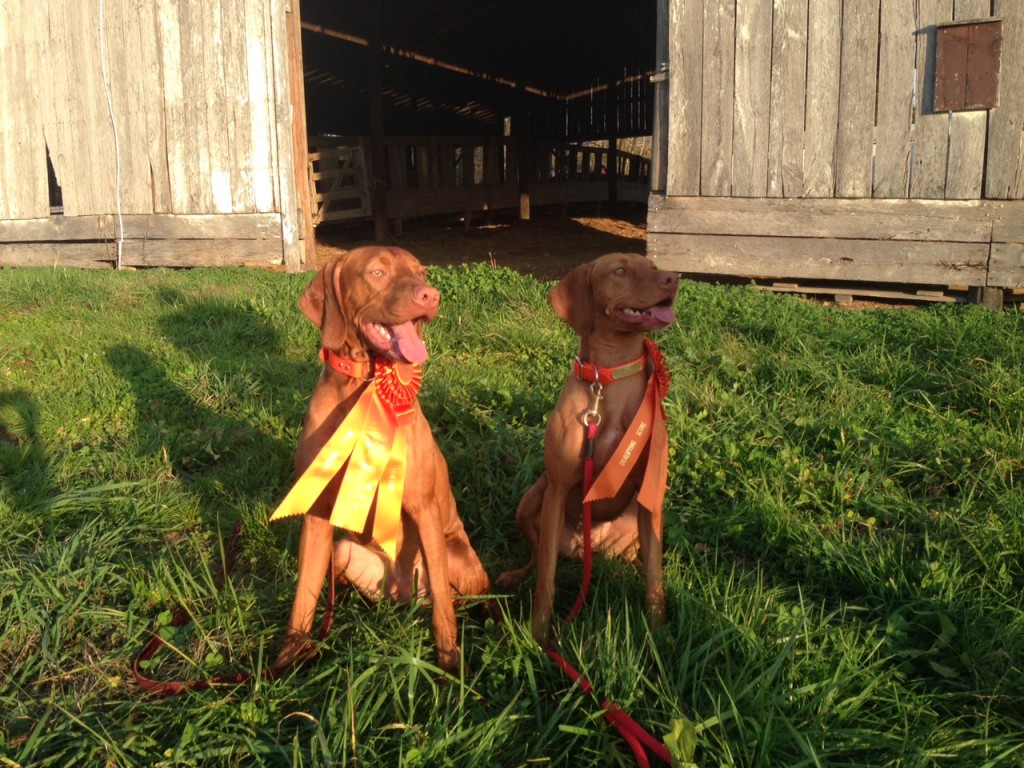 Zara and Archer modeling their ribbons.

There was a smaller group of handlers and dogs at the hunt test on Sunday and we were not there as long. Zara had a good run again, although she only found two birds and I felt like she was a little more tired and/or not running quite as hard as Saturday. Her bracemate this time was a 3-year-old male named Jack but he seemed more interested in humping her than finding birds. After we let them off leash, Zara took off and Jack went after her, trying to have some fun. Zara took a running snap at him, as if to say, “leave me alone! I’ve got birds to find!”

We also earned a perfect 10 score on Sunday and another Junior Hunter pass. It’s almost hard to believe how well she did. It was a really fun time and I can see how this sort of thing can start to become addicting. It is so cool to see Zara in her element. Part of me wishes we owned a multi-acre field so that we could do this every day. :)

Now she’s halfway to being a Junior Hunter and we can hopefully finish her title in another two-day hunt test.