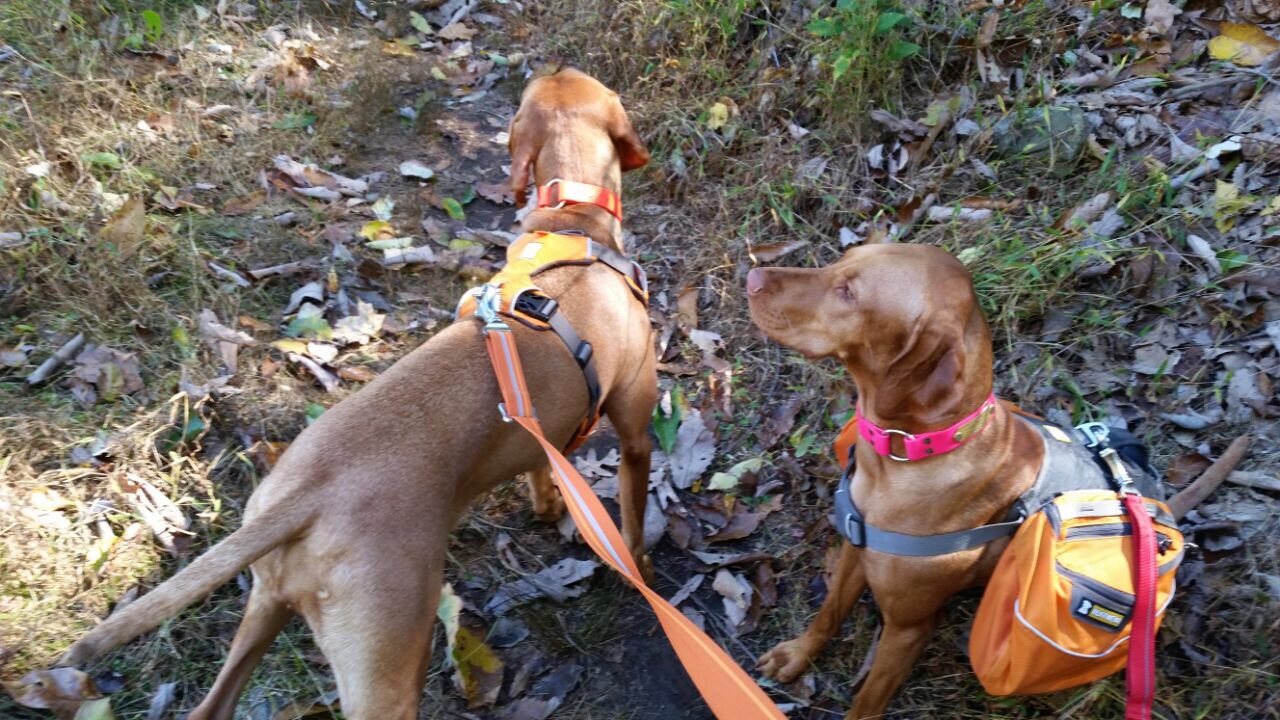 This weekend we watched Zara’s sister, Lily, while her parents were away. Lily arrived on Thursday evening and she and Zara started running around the yard almost instantly.

The last time we dogsat Lily, we had just moved into our current place and were still unpacking and moving a few things from the old place. Because of that, we didn’t have time to do many fun things with them. This time was different. On Friday evening, we took them on a walk to Shirlington and had dinner at the Irish pub. It was still warm enough to sit outside. Both dogs were pretty good, but only because we were giving them bits of food throughout the meal and we’d brought bully sticks for them to munch on.

On Saturday morning, Zara and Lily spent a good amount of time sprinting around the yard and playing tug-of-war with Zara’s frisbee. Then we took them a pumpkin patch to pick pumpkins! We went to a farm that was an hour drive from where we live, but I chose that one because it was the only farm in the area that actually allowed dogs in the pumpkin patch. 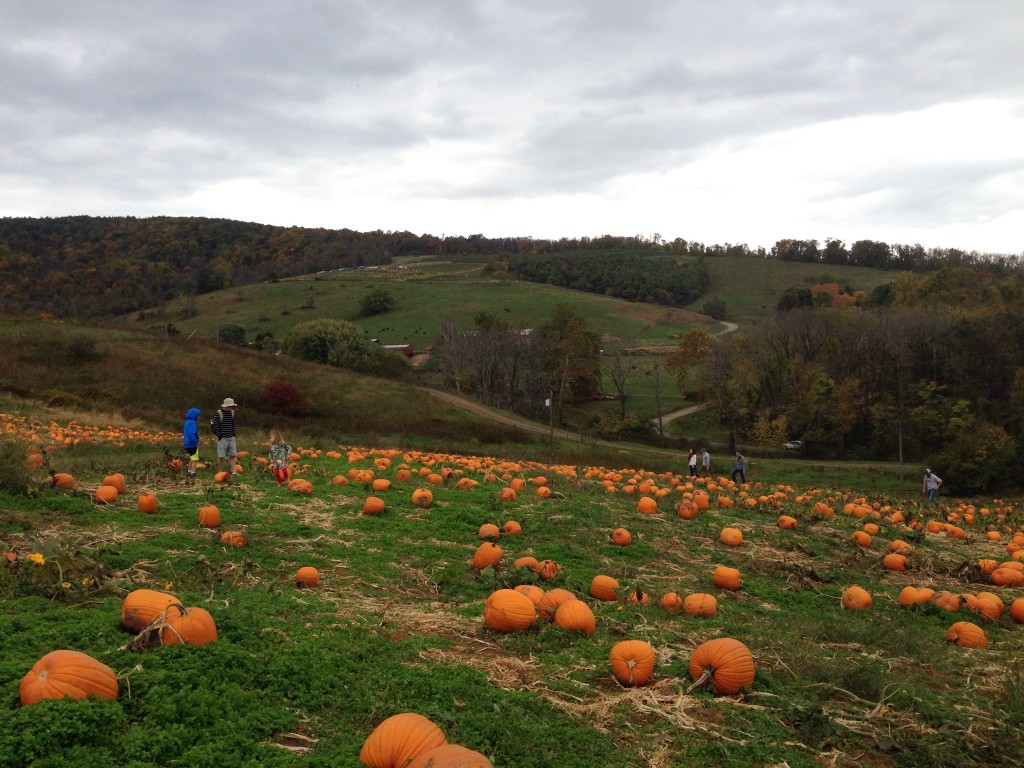 Zara doesn’t mind riding in the car and slept most of the way. Lily has some car anxiety and she was nervous when we first started out. Then she climbed into my lap and fell asleep after a while. It was pretty cute and we took a selfie. :) 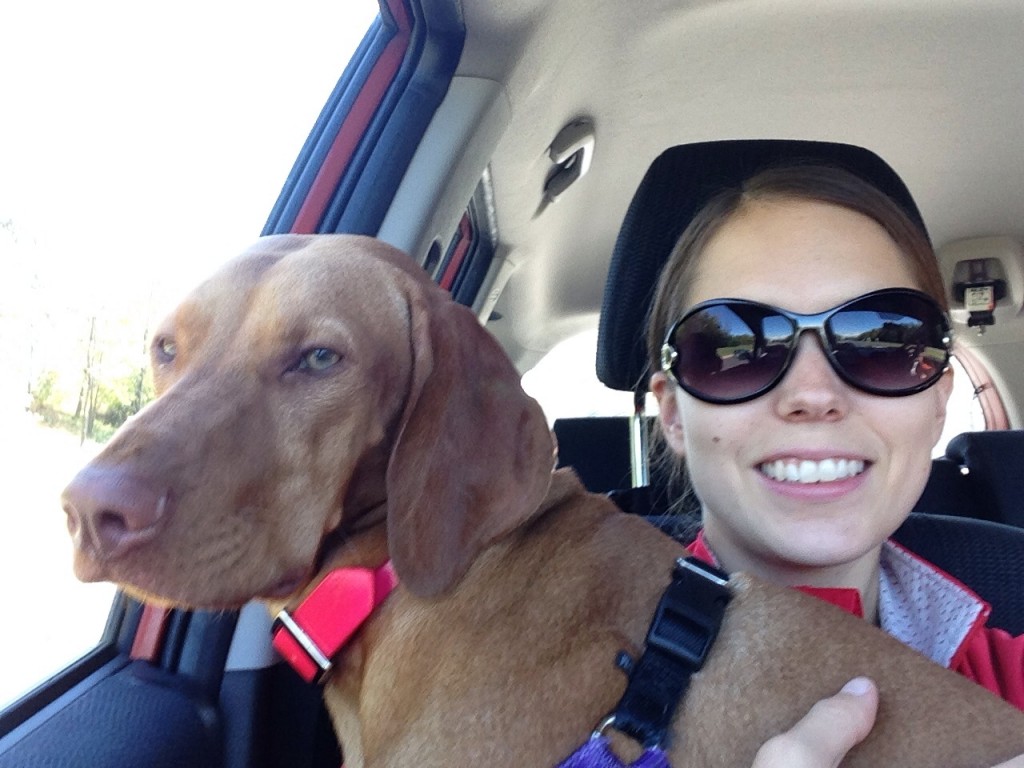 The pumpkin patch was pretty large and they had tons of pumpkins. As soon as we got out of the car, Zara and Lily started going crazy for all the sights and smells at the farm. We walked around the pumpkin patch for a while and they were pulling us around, trying to eat the rotting pumpkins and generally being over-excited. I’m sure we looked ridiculous to the other people at the patch, because all the other dogs that were there were sitting next to their humans or walking nicely on their leashes. We took some photos and picked two pumpkins and then headed home. 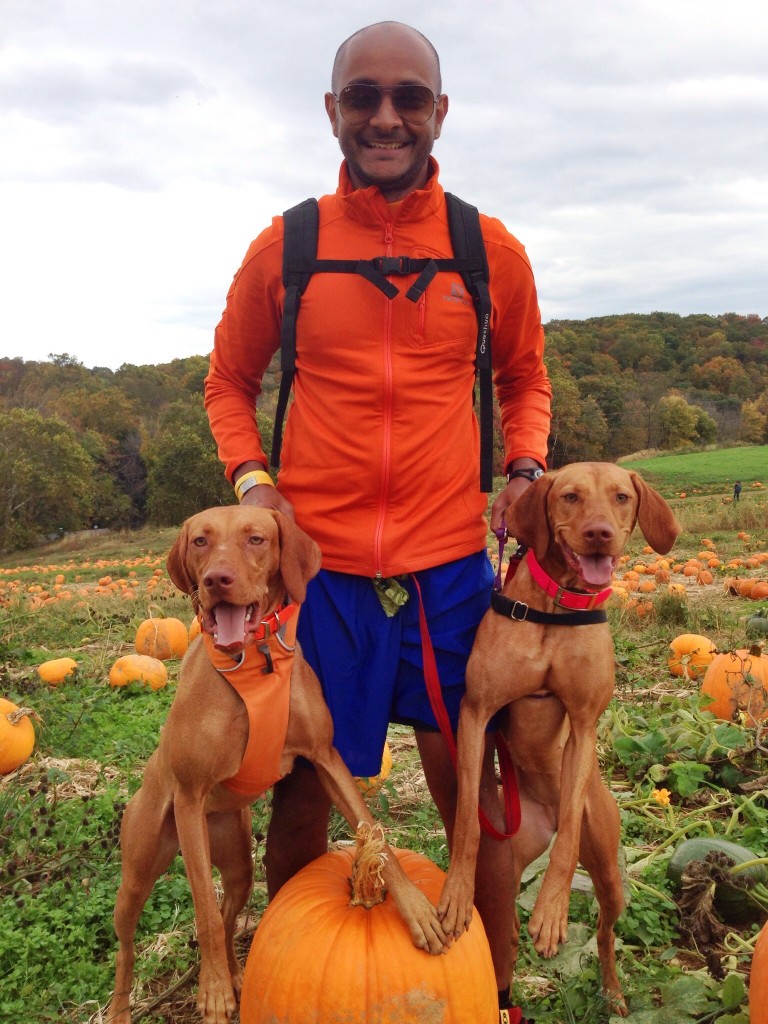 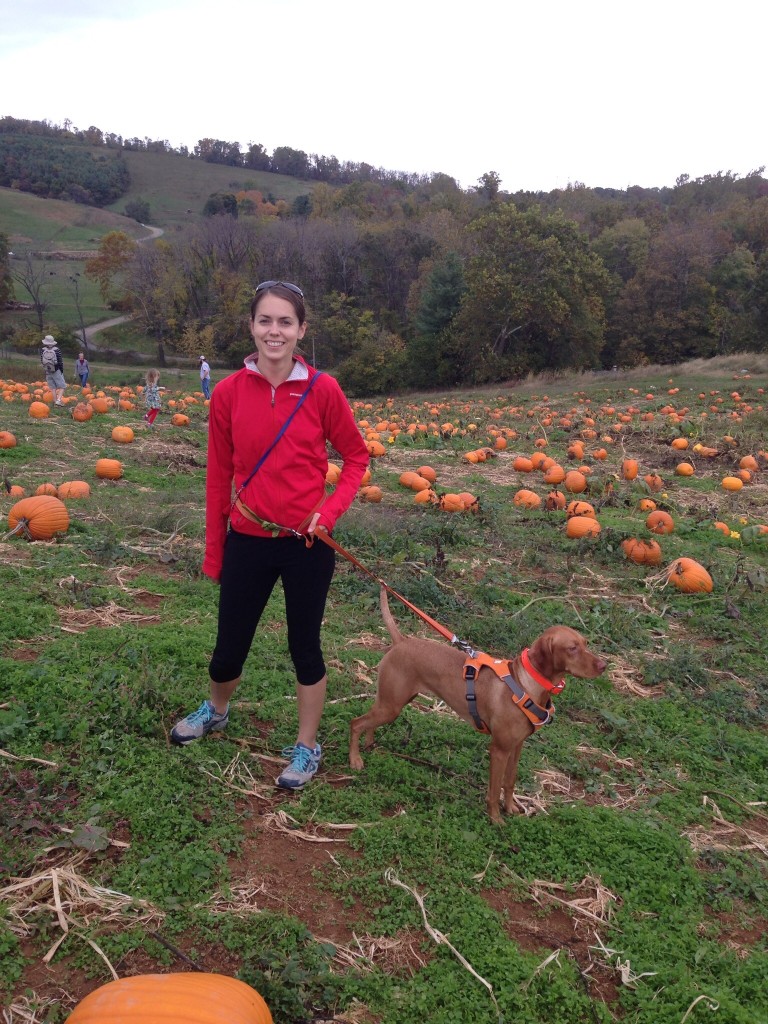 We stopped at Home Depot on the way home to get a few things. I don’t think Lily has been in Home Depot before because she was like, “where are we?” Miraculously, Zara walked calmly on her leash with Chris and the shopping cart while Lily tried to sniff everything. 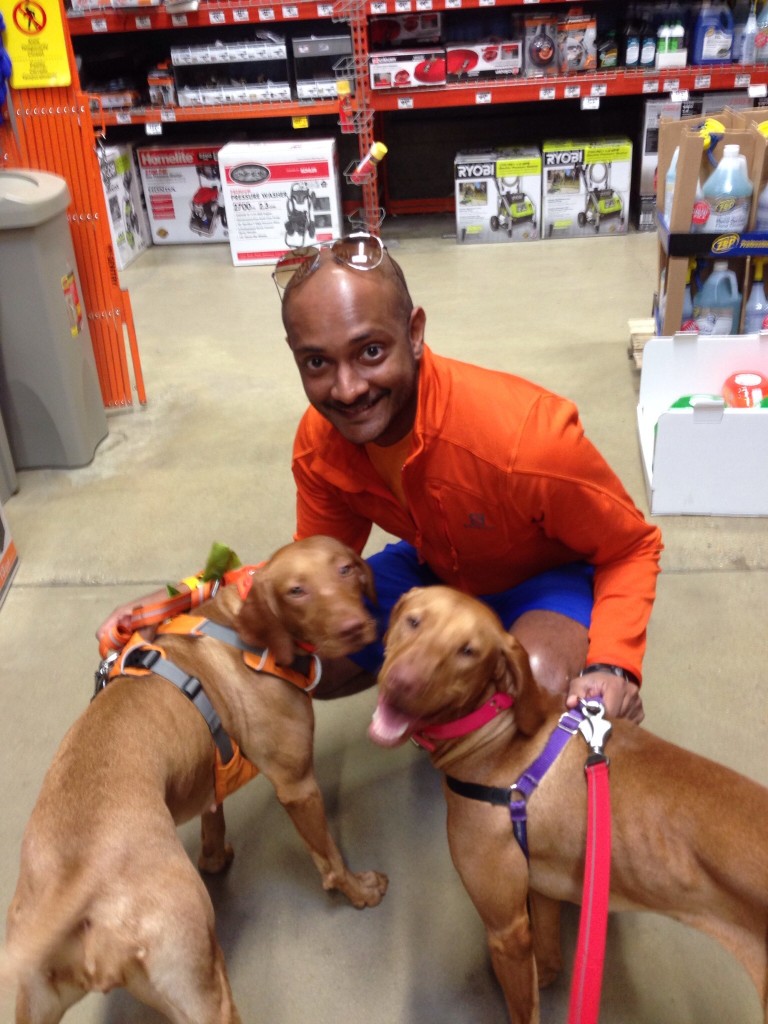 On Sunday, we took them hiking to Turkey Run Park. The last time I was there, I had Zara off-leash for a while but we didn’t want to try that with two dogs. We put Zara’s Ruffwear backpack on Lily to attempt to slow her down a bit but she was as energetic as ever. The leaves are changing and it was a perfect day for a hike. 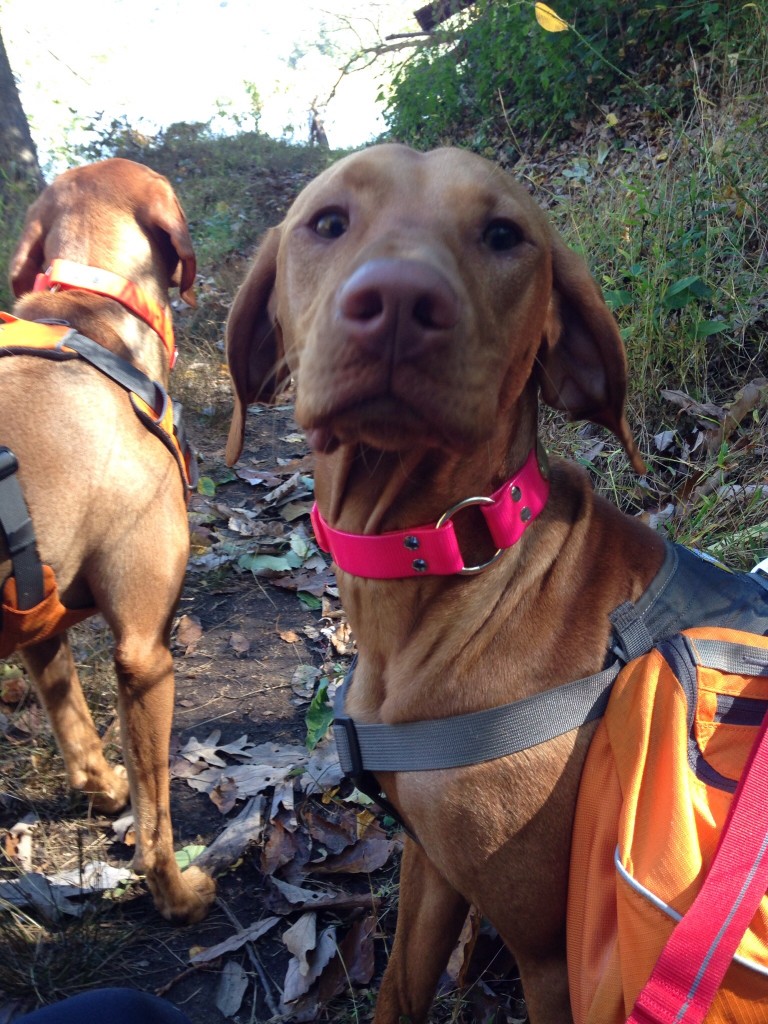 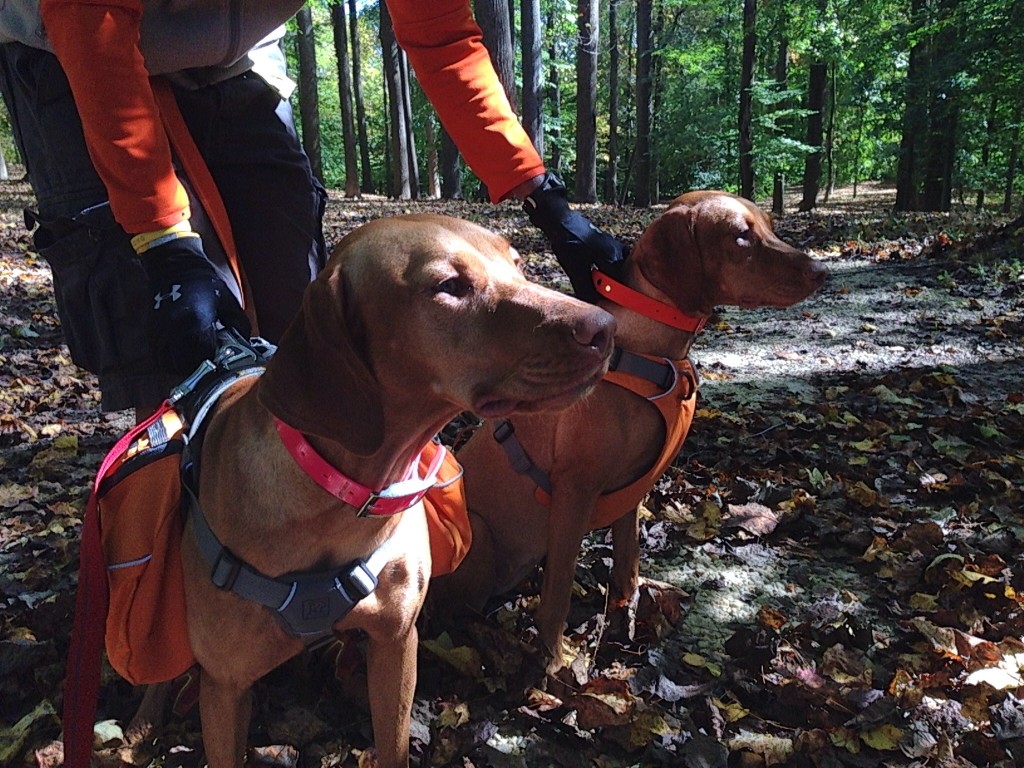 I think both puppies had fun together. There were a few times when Zara was tired and didn’t want to play with Lily anymore and got a little snappy. But I was never worried that they would hurt each other. On Sunday morning, both puppies were in our bed. When they woke up, they started wagging their tails and licking each others’ mouths. They looked so happy. It was very cute.

After spending so much time with Lily, we definitely noticed some differences between her and Zara. Zara is physically much thicker – her rib cage is a lot wider. We weighed both of them and Zara is 46 lbs. and Lily is 40. I’m not surprised though, because Zara was the largest female puppy in their litter and noticeably larger than Lily even at 8 weeks.

Personality-wise, Lily is much more cautious and nervous than Zara. And she may even have more energy, but that could be due to the fact that it takes her a while to settle down and be comfortable. She’s also more “Velcro” than Zara, especially with Chris. Zara hardly ever wants to be held. Despite their differences, they have a lot of similar mannerisms and behaviors which was funny to watch.

Zara will only have to wait a couple of weeks to see Lily again because she is going to stay with Lily and her parents for the weekend when we go on a short trip.

Now that Zara has her Master Hunter title, we’re

Five years ago I entered Zara into her first Junio

Another rainy weekend, another hunt test. 🌧😒

“Are you gonna stop taking photos and flush this