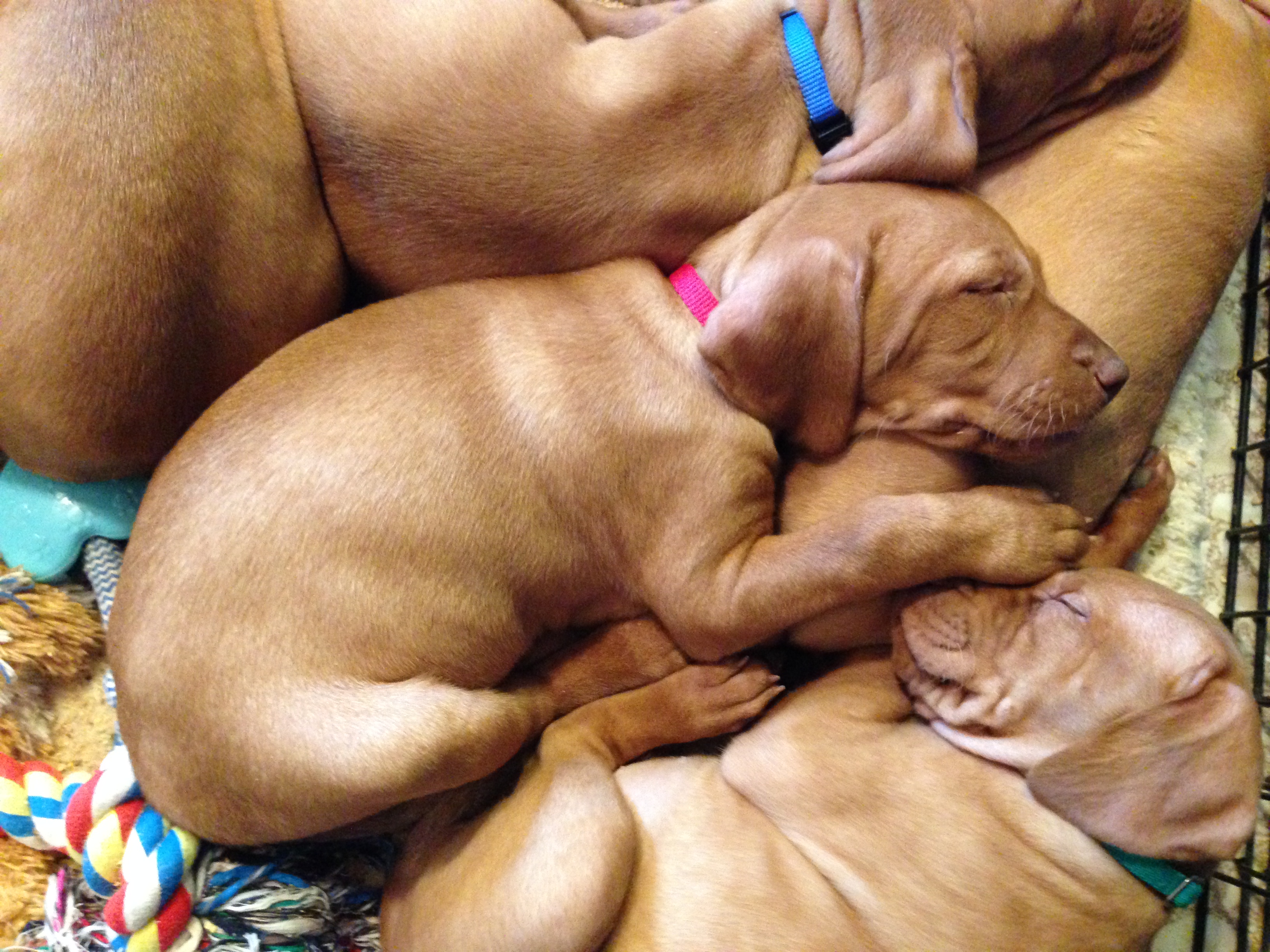 Welcome to my new blog! I will be writing about and posting lots of photos of my vizsla puppy, Zara. My boyfriend, Chris, and I will be bringing her home very soon. We have been waiting a while (almost a year!) so we are very excited.

I know what you’re thinking. What is a vizsla and what is so special about them? Well, until about a year and a half ago, I had never heard of the breed, either. My boyfriend and I had tossed around the idea of getting a dog off and on, but to be honest, he was more enthusiastic than I was. Although I grew up with beagles, after college I did a fair amount of dog-sitting and that kind of turned me off on wanting my own dog. They just seemed like so much work and many of the dogs I was around were not well-trained. I just wasn’t ready for the responsibility. Fast-forward a couple of years, and the idea of having a puppy – my own puppy – seemed more enticing.

A couple we are friends with have an adorable mixed-breed and they came over to our house on evening in August 2012 for dinner. Earlier that day, they had been to the dog park and told us about a dog they saw leaping over a fence at the dog park. Amazed at this dog’s ability, they asked the owner what breed it was and they were told it was a vizsla. Intrigued, we Googled this athletic breed of dog.

The search results said that vizslas were very energetic, great for running long distances at a fast pace and were known as “velcro dogs” because they love to be next to, or on top of, their humans. The photos were also very cute. As soon as Chris saw that they are one of the best breeds for running, he was sold. “This is the dog!” he said excitedly. “This is the type of dog we need!” Chris and I both enjoying running and at any one time, are typically training for some sort of race. One of the reasons we were looking at getting a dog was so it could run with us. Before finding out about vizslas, we had discussed the possibility of a Brittany Spaniel, since they are also known for their athleticism and energy.

I wasn’t as enthusiastic at first. After reading multiple articles emphasizing that vizslas are not for everyone, I was intimidated by their energy demands. Would we really be able to keep up with this high-energy pup? According to a Runner’s World article, vizslas may be known for running sub-7-minute mile pace, but I am certainly not that fast! :)

A couple months passed and we continued to think about vizslas. Although vizslas are not common in this country, we began to spot some in our neighborhood. And then I realized that I had actually seen a vizsla puppy a few years ago, but hadn’t known what it was. In 2009 or 2010, I went for a walk one day during my lunch break on the running/bike path near my office. As I was walking along, I saw a man with a puppy coming toward me. Normally I would not have said anything, but this puppy was so cute, that I just had to stop and say hello. I knelt down and petted the puppy. It was all one color – a light rust – with blue eyes. I had never seen a cuter puppy before. I may have asked the owner what the breed was, but I’m not sure. Either way, I remember thinking that this puppy almost made me want one myself. Turns out, I just had to wait a few years for that thought to come true!

In January 2013, we contacted a breeder who was hoping to breed her dog in the summer. After meeting her and her two vizslas in March, we had made up our minds that we wanted a vizsla puppy. Her dog would likely come into heat in July, so the puppies wouldn’t be ready to go home until at least November. It would be a long wait, but we had travel plans in the summer and early fall, so the schedule worked for us.

Now that the months have become days, we are super excited to bring home our little girl!

We actually found a woodcock! 🐦 Good thing @the

We had a good time taking a newer NAVHDA member, K

I had the opportunity to work on Zara’s backing

Here is an excerpt from Colombo’s Trick Dog Inte

We finally had a successful day woodcock hunting!