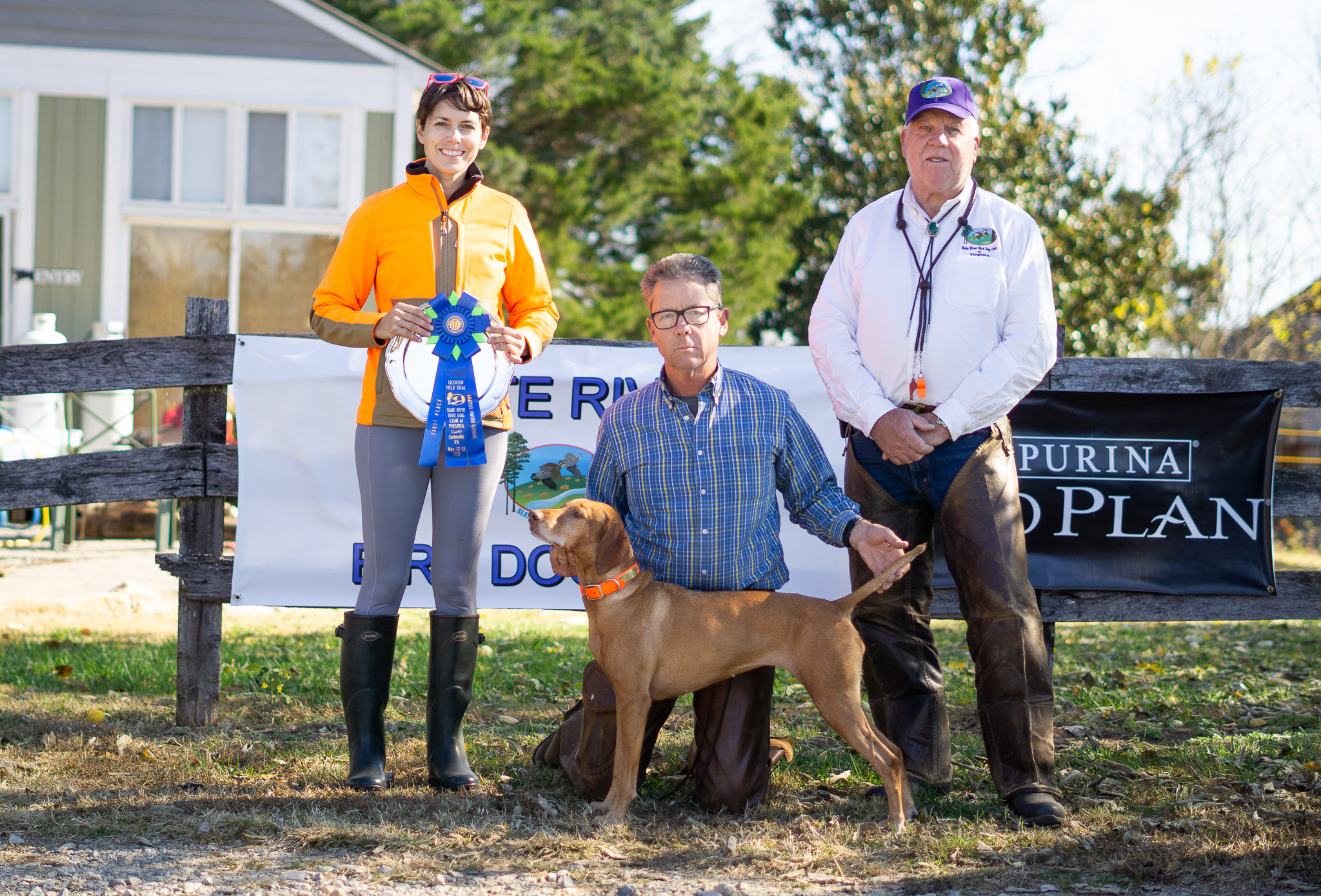 What are the characteristics of good field trial dog? What are judges looking for in finished gun dog stakes? This has been a question that has perplexed me over the past few months, as I started running Zara in AKC field trials. Field trials are more subjective than AKC hunt tests and NAVHDA tests and I’ve found that the AKC’s rulebook is not completely clear on judging criteria.

Although I am far from an expert, after attending several events, watching multiple braces, and talking to more experienced handlers, I have a better idea of what makes a good field trial dog. Knowing this will help me train Zara to fit these criteria.

When the two dogs are released to run, ideally they should take off at a fast speed and run forward, ahead of the handler, beginning to hunt. It’s not as ideal to see a dog that runs a bit and stops to poop, or starts sniffing around, circles back to its handler, and generally doesn’t look like it’s hunting. I’ve worked on this with Zara by blowing a whistle at the start. One whistle means “go.” If she starts coming back to me, I blow the whistle again. I also make sure that she poops and pees multiple times before she runs.

In most of the bird dog training I’ve done, Zara and I wander around a field that holds birds. I walk forward and then turn and circle back. I’m not following a specific path. In field trials, there’s always a route that you are following. As the handler, you continuously move forward. There is typically no bird field, and birds are planted along the course on the edges or areas that would naturally hold birds – such as in a grouping of trees. Ideally, in a field trial, your dog should stay out in front of you and keep moving forward. It’s fine if the dog checks back occasionally with you. But it seems like judges want to see a dog that keeps pushing forward at a fast clip. According to the AKC rulebook,  “…[a gun dog] must have a bold and attractive style of running, and must demonstrate intelligence in quartering and in seeking objectives” (page 39). Objectives are places that are likely to hold birds.

In hunt tests and NAVHDA tests, the style of the dog while on point is not judged. While the dog should show a rigid stance and give no doubt that it is on point, it doesn’t have to be “pretty.” In field trials, style IS judged. A dog with a high tail, high head, and intense look is more desirable than one with a low or wagging tail, a hunched back and a look of uncertainty.

In this video, Zara ends up right on top of the bird. Her point is not as stylish as it usually is. Her head is down, her back is hunched over, and her tail is low. I moved her back a few feet because I didn’t want the bird to flush in her face and tempt her to grab it. I would not do this in a field trial – it would not be allowed.

In this video, Zara shows what I would consider an ideal, stylish point.

In gun dog stakes, it may seem obvious, but a dog’s point must produce birds. Sometimes dogs go on point, but there is no bird. This can be for multiple reasons. Maybe the bird ran off. Maybe there was a pile of feathers. Or maybe the bird is there, but it’s buried deep enough in the cover that the handler can’t find it. When this happens, it is considered an “unproductive point” or a “nonproductive.” Even if a dog points several times in their run, if they never produce a bird, they won’t be considered for a placement. This is the case even if they have bird contact through a stop to flush situation.

Minimal Movement on the Flush

A field trial dog in gun dog stakes is supposed to be steady to wing and shot. This means that they should not move when the bird flies off. Sometimes, the bird will fly behind the dog or the dog doesn’t have a clear sightline to watch the bird fly off. It is a natural tendency for a dog to want to turn to watch the bird. This might mean that they take a few steps or turn around to “mark” it. That is allowed, but ideally you don’t want your dog moving much at all. There should definitely be no forward movement, like a hop forward.

No Letdown After the Flush

After Zara and I participated in the Vizsla Club of America’s National Gun Dog Championship last year, I spoke with a guy who has been in the field trial world for many years. I was a little unsure about why Zara had done so well and he helped explain some of the things that judges look for. One thing he mentioned was that a good field trial dog doesn’t “let down” after the flush. When the bird flushes up, most dogs will shift from an intense pointing stance to a more natural standing position as they watch the bird fly. However, it’s ideal if the dog still looks interested in the action and doesn’t immediately deflate.

In this video, Gus the German shorthaired pointer takes a few steps to mark the first bird when I fire the blank pistol. Zara is backing Gus and just turns her head. On the second bird, Gus doesn’t move at all. That is ideal. He also still looks interested and intense as the birds fly off.

While field trial dogs should show independence in their running style and move forward ahead of their handler, they should also be cooperative. If the handler whistles or calls to turn to the dog in a different direction, ideally the dog should heed the command. While more verbal “handling” is allowed in field trials than in hunt tests, continuous “hacking” of a dog is not the goal. On page 39 of the AKC’s rulebook for pointing breed field trials, it states that “The dog must hunt for its handler at all times at a suitable Gun Dog range, and should show or check in front of its handler frequently.” Therefore, there should be an obvious connection between the dog and the handler. The dog should keep tabs on where the handler is.

In several of the trials I’ve run Zara in, she’s lost sight of me because the cover was very high and has circled back, clearly looking for me. I’m a little harder to spot because I’ve been walking instead of being on horseback.

A Dog That Doesn’t Run Off

A speedy, forward running dog is what you want in a field trial. But there is a balance. You don’t want a dog that runs so fast and so far that it gets lost. Being lost for a short amount of time is okay, but if the dog is lost for the majority of the running time, that is not a good look. The judges need to be able to see the dog for a good portion of the time in order to judge and potentially place it. According to the AKC rulebook, “[A dog] must cover adequate ground but never range out of sight for a length of time that would detract from its usefulness as a practical hunting dog” (page 39).

Not all field trial stakes involve retrieving, but some do. Retrieving in field trials seems to be judged by much looser standards than in NAVHDA or Master Hunter tests. It is also not the most important part. However, I still think a quick retrieve with minimal commands is more desirable than a retrieve where the handler has to command the dog multiple times. I have done a lot of retrieving with Zara because of our background in NAVHDA, so that is one of her strong points when competing in field trials.

Just as a strong start is important, it’s good to have a dog that completes its run with energy to spare. It demonstrates that it has the stamina to be a solid hunter. Since most gun dog stakes are 30 minutes long, this is usually not too difficult for a well-conditioned bird dog. However, it can be more of an issue if the weather is warm.

Every field trial brace is different. Sometimes each dog finds multiple birds, sometimes one of the dogs gets picked up in the beginning, sometimes a dog is birdless or only has a nonproductive point. Sometimes stop to flush situations occur, sometimes the dogs take turns backing each other multiple times. Sometimes your dog goes on a point and when you step in to flush, a covey of ten birds gets up. I think situations like backing, being steady on coveys, or cleanly stopping to flush can help your dog. When Zara won her first place last year, she found two coveys during her run. While I’m sure that is not the only reason she won, it was impressive the way she handled them.

Have you run your dog in gun dog stakes? Do you agree with the criteria I’ve listed? What do you think makes a good field trial dog?