Today Zara and I did some more bird training with her breeder, Jane. We went to the same dog training area we visited in November. Jane brought Zara’s mom, Caiya, and her brother, Benny, who had been away at his trainer’s house the last time we met up. I also invited another couple I’ve connected with through Instagram, Alex and Pablo, because they are interested in possibly doing hunt tests or field trials with their 10-month-old vizsla puppy, Archer.

We were originally going to meet up on Sunday but with the forecasted high of 20 degrees and windy, it made more sense to do it today. The high was about 37 degrees, which certainly isn’t warm, but not too bad when you’re wearing enough layers.

Zara and I were the first to arrive and I let her run around the field for a little while to burn off some energy. I think she remembered being at the training area and set off leaping around right away. When Archer and his parents came, the two of them began running like crazy, chasing each other and exploring all the wonders that the field held – lots of various poops, patches of ice, a jaw bone of an unidentified animal, and a full (fresh!) skull of a dead animal, maybe a fox? I had a very difficult time getting the skull away from Zara until Pablo and I eventually lured her away with some treats. 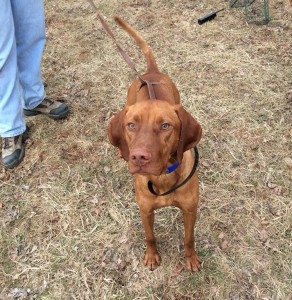 When Jane arrived, she set out two quail under small cages so they couldn’t fly away immediately. We took Caiya, Zara, and Archer out. Caiya was all business, nose to the ground, and Zara and Archer followed after her, not wanting to miss out. I think Caiya pointed out the first bird and soon Zara and Archer came upon it as well. Both the youngsters were a bit timid around the bird at first and not quite sure whether to point or pounce on it (Archer wanted to do more pouncing than Zara). When Jane released the bird and shot the blank pistol, Archer ran after it while Zara cowered near me. She had been somewhat afraid of the gunshots last time, so I wasn’t surprised. I tried not to baby her too much and just encouraged her to keep moving.

The dogs found the second caged bird soon after and Zara did point more convincingly at that one. I stroked her tail up and praised her. After that bird was released and flew off, we started heading back in the direction of the parking area. Zara was somewhat ahead of us when I saw her stop and as I approached, I could see she was pointing, with good form (tail and paw up). She held the point for maybe 5–10 seconds, which was an improvement over her previous points. Then she moved in and the bird flew up. Jane quickly shot the pistol but Zara didn’t seem bothered this time. She seemed to be starting to understand what she should be doing. After a few more minutes, she found the bird again and pointed at it! It was cool to see her beginning to get it.

Then Jane put Caiya back in her car and got Benny out. He has been with his trainer for the past six months or so, so he looked like an old pro in the field and found the first bird almost immediately. I think Zara and Archer may have been getting a little tired at this point (this was when she located the animal skull and started playing with that instead of hunting).

We took a break after walking around the field some more and then Zara and Archer started chasing each other and playing with a stick. Clearly playtime is just as important as training time. :) 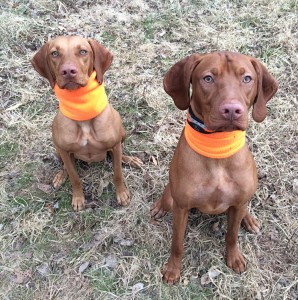 Zara and Archer in their stylish orange neckwarmers. Photo by Pablo. 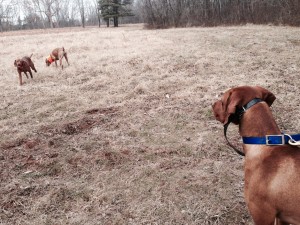 There’s a hunt test next weekend in Maryland, held by the Southern Maryland English Setter Club. I sent in my entries a few weeks ago, so I am assuming I will get in, unlike last time. It would be nice if Zara could get one or two qualifying scores toward a Junior Hunter title but I’ll have to see how she does.

It’s fun to see vizslas doing what they were bred to do. Zara was out in the field for about 3 hours today, running for most of the time, and she has been asleep on the couch since we’ve gotten home. Lots of exercise = happy puppy. :) 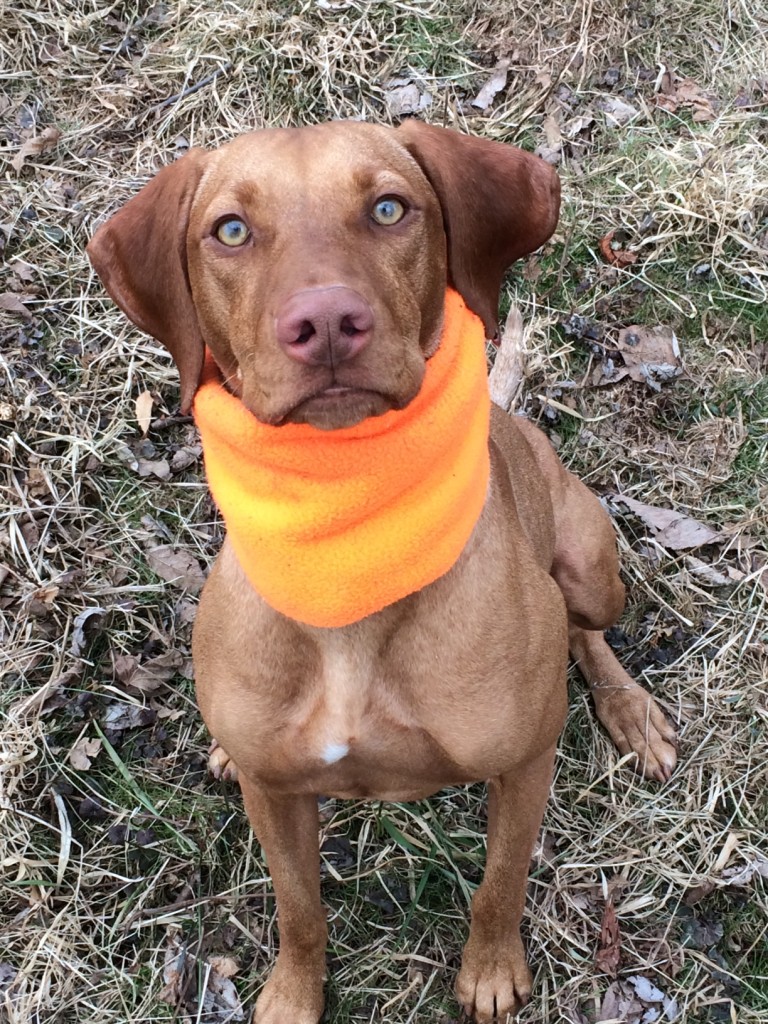 My beautiful girl. Photo by Pablo.