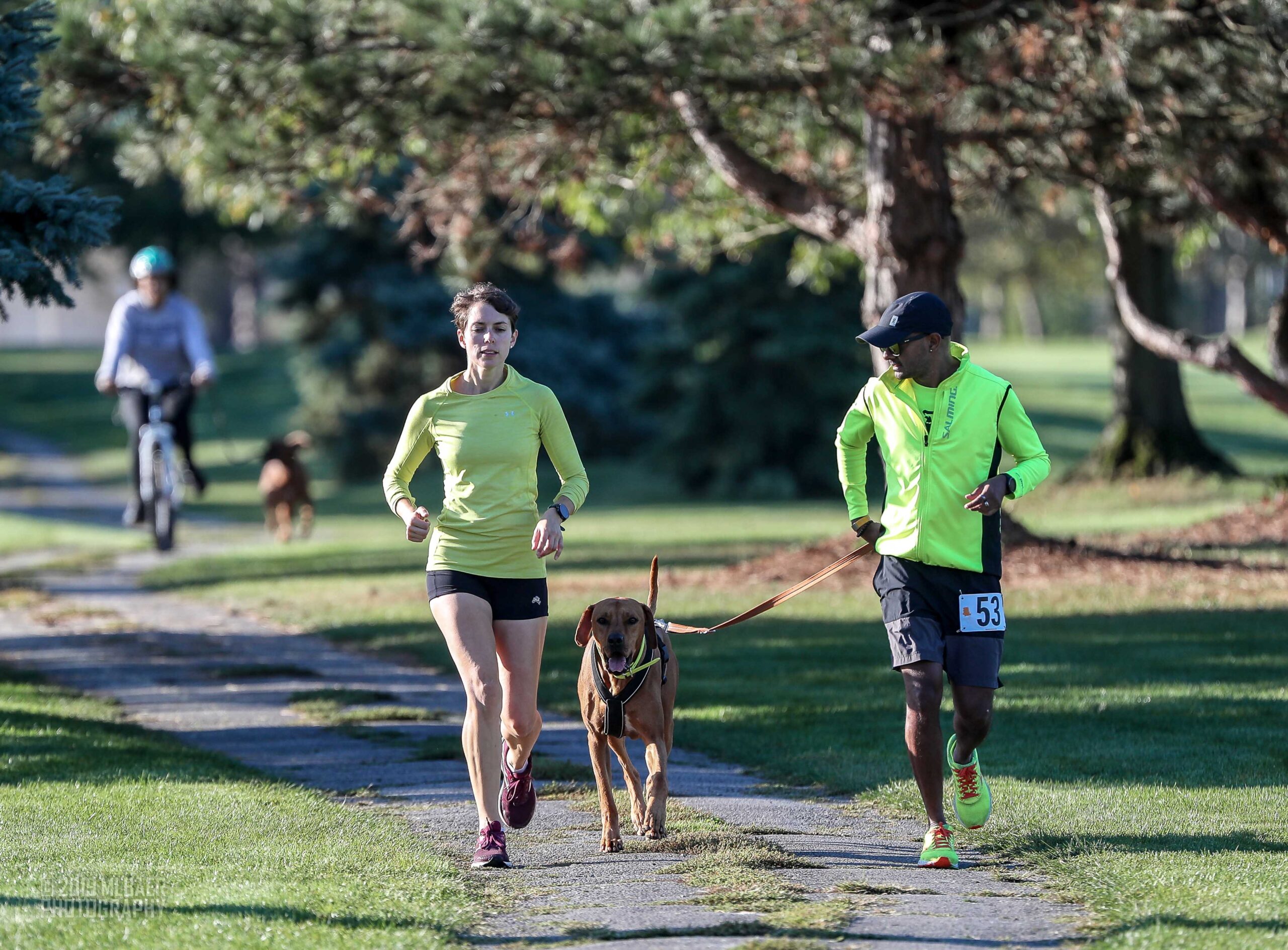 In October 2019, Chris and I ran a 12 mile race with our Rhodesian Ridgeback, Colombo. This was part of the Rhodesian Ridgeback Club of the United States’ (RRCUS) Endurance Trial during their National Specialty. The ET is designed to show the fitness of ridgebacks and their ability to undergo a lengthy physical test without any undue stress. Ridgebacks were bred as endurance animals able to cover long distances while hunting. The ET is a modern adaptation of the breed’s original purpose.

When I first heard about the Endurance Trial, it did not seem impressive. Colombo’s breeder had completed it with Colombo’s father, and she told us about how much training was involved and how it was such a great accomplishment. As owners of a young vizsla, this was amusing to me. Predictably, the Vizsla Club of America does not hold an Endurance Trial during their National Specialty. Anyone who owns a vizsla in halfway decent shape knows that they could easily go run 12 miles any day of the week.

What is the Endurance Trial?

The ET takes place once a year at the RRCUS National Specialty. Any purebred ridgeback over age two can compete, even if they are ridgeless. The 12 mile run is broken up into three segments of 4 miles each. There is a 10 minute break between each segment. The dog is checked by a veterinarian before the run begins, during each break, and at the end. There is also a short obedience test before and after the run, to demonstrate that the dog will still perform and listen to its handler after completing a lengthy physical effort.

Owners can either bike or run with their dogs and the dog can have multiple handlers during the run. It is not a race, but the teams have to maintain a pace of at least 10 minutes per mile.

Even though I had thought the ET was amusing at first, I still thought it would be something to fun to do with Colombo. We had gotten him as another running partner, after all. We first started running short distances with him when he was 18 months. During that six-month period before he turned two, we worked on his running skills and getting him in shape. On average, we ran 3 miles twice a week with him.

During this time, he was still very prone to chasing squirrels and rabbits. Since the first time I’d run with him and Zara together he’d gone after a squirrel and pulled me to the ground, I wanted to be extra careful to not have this happen again. Our neighborhood is literally crawling with squirrels and rabbits, so I would drive a short distance to a parking lot and run with the two of them along a fairly busy, flat road. This ensured that there would be no animals on one side and unlikely that there would be many on the other.

Although it took some time to get both dogs synced and used to running with each other, I think it helped having Zara to “train” Colombo on what to do. By that point, we had been running with her for four years, so she was very experienced. She is also a very focused runner and typically does not try to veer off to chase animals or say hi to people or other dogs. When running with both of them together, I had them attached on a leash splitter, so Colombo couldn’t venture too far from Zara. She also helped pull him along when he started to get distracted. 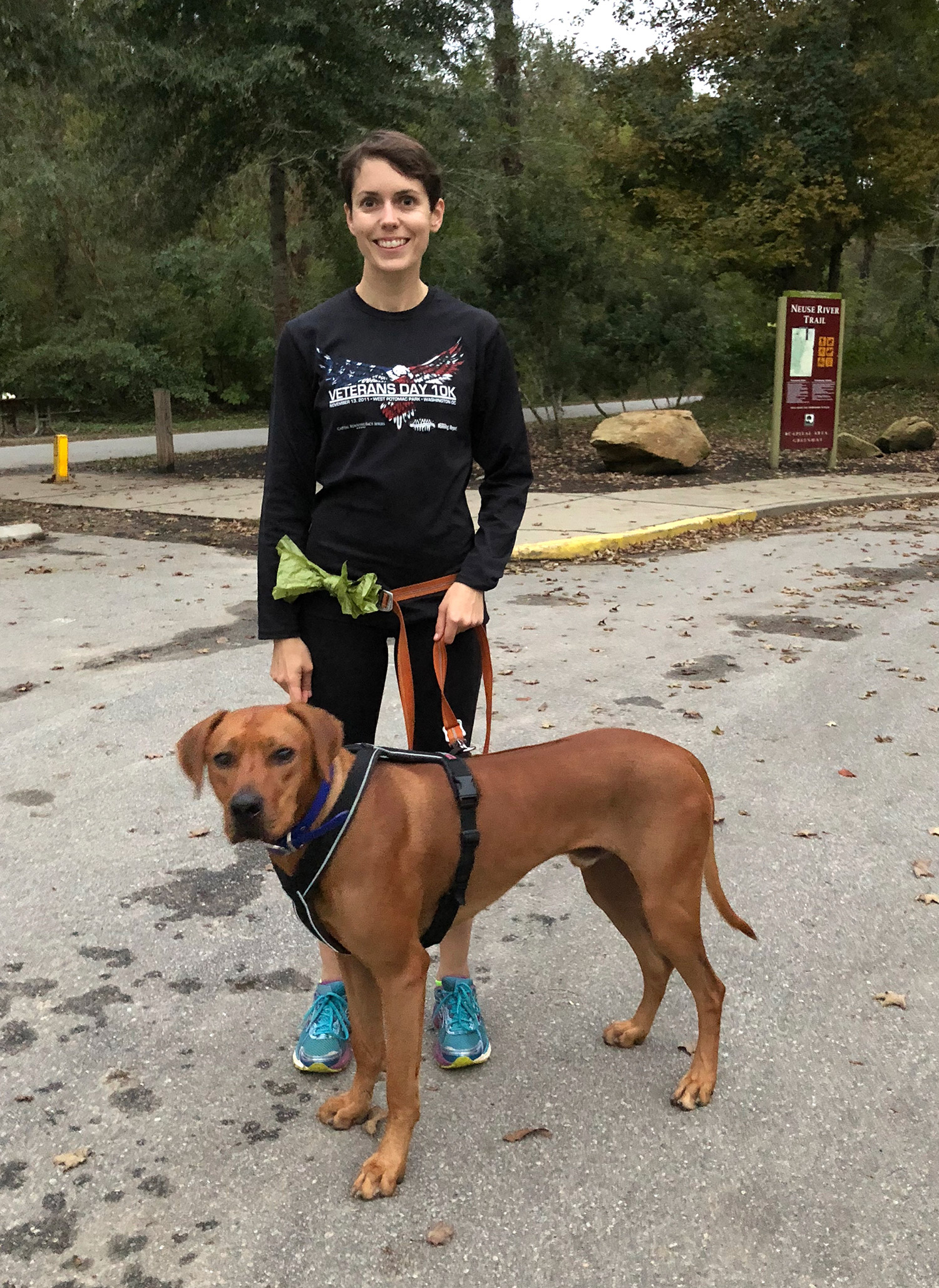 Colombo and I on one of our first runs together, October 2018. Chris was running with Zara.

When Colombo turned two in April 2019, we were finally ready to start adding mileage to his running. By that point, we were fairly certain that his growth plates had closed. We had six months until the Endurance Trial in October. Although I didn’t follow a strict schedule, I did try to gradually increase our mileage and aimed for running three times a week: two short runs of 3 miles or so and one longer run on the weekends.

By May, it was already hot in North Carolina where we live. I knew that we had some hot runs ahead of us over the summer. Once our longer run was 5 miles, I started getting up very early on Saturdays to try to start running by 6:30 AM. Again, for this long run, I chose one route and stuck with it for the duration of the summer. It was a paved trail through the woods and was nearly completely shaded. It also had access to a small stream all along the trail so that I could let the dogs to cool off in the water if needed. I was very worried about the heat and usually stopped at least twice during each long run. It was typically about 70 degrees with high humidity when we started running. Unfortunately, the temperature never dipped much lower than that. 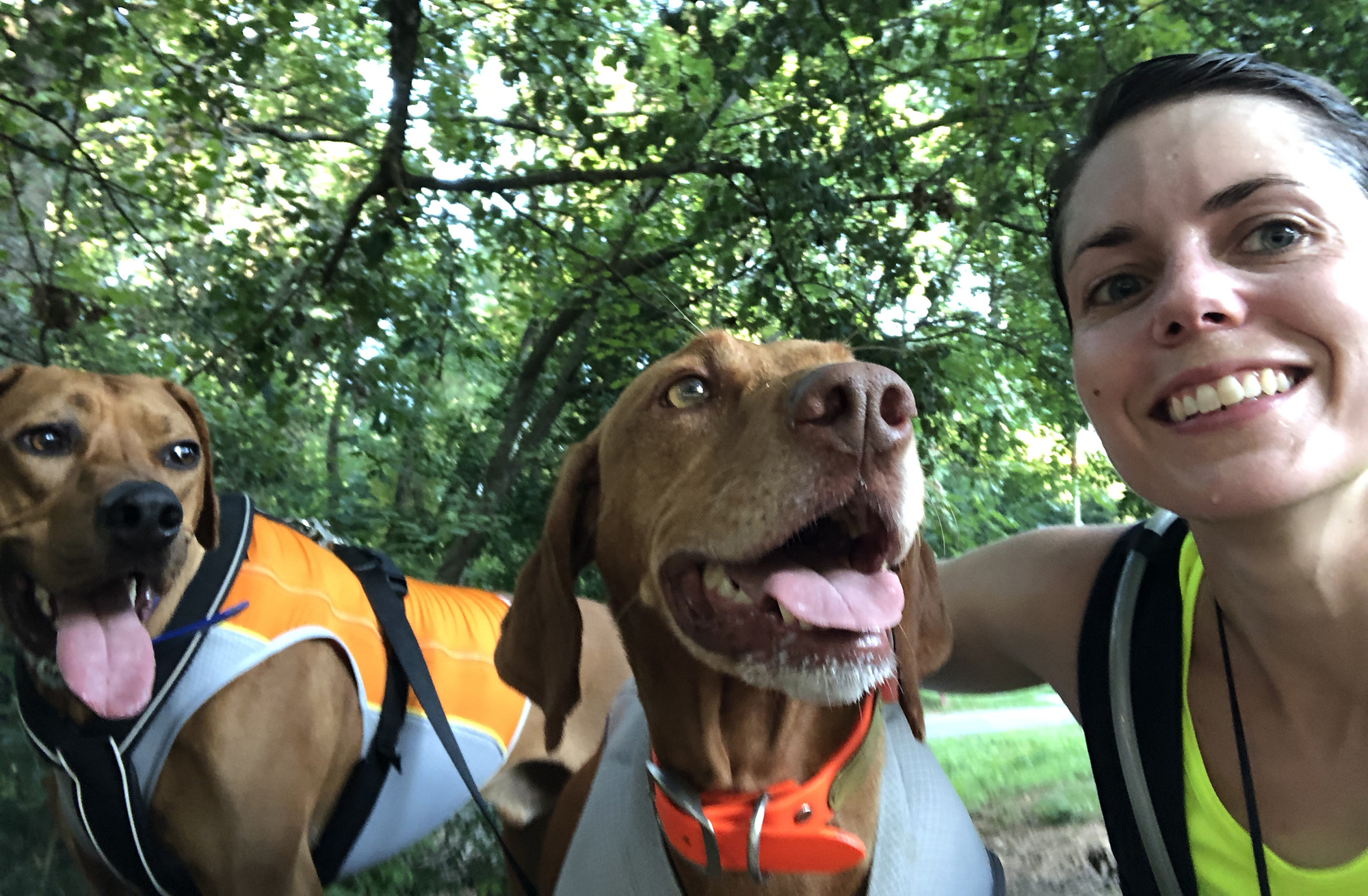 This is what the end of most of our summer long runs looked like – hot and sweaty. Zara and Colombo are wearing their Ruffwear cooling vests in this photo. I didn’t always need to use them, but some runs were especially hot.

By the end of August, Colombo, Zara, and I were up to eight miles for our long run. Colombo had taken to the training well and seemed to enjoy it. On the days we were not running, we did walks, playdates with other dogs, off leash hikes in the woods, and occasional swimming. The training was going well until I felt a pain in my left knee during one of our runs. My knee locked up and I had to walk back to my car. After that, I had to take a few weeks off of running. Chris still ran with Colombo some, but was not doing the long runs. I worried that he wouldn’t be able to do the full ET in October.

After taking some time off, I gradually started running again. I was up to three miles again before we left for the National Specialty. Since the ET is broken into three segments, we decided that I would run one of the legs with Colombo and Chris would do the other two. Even though Chris had not been running long distances, he was confident he could run eight miles on the day of the event. 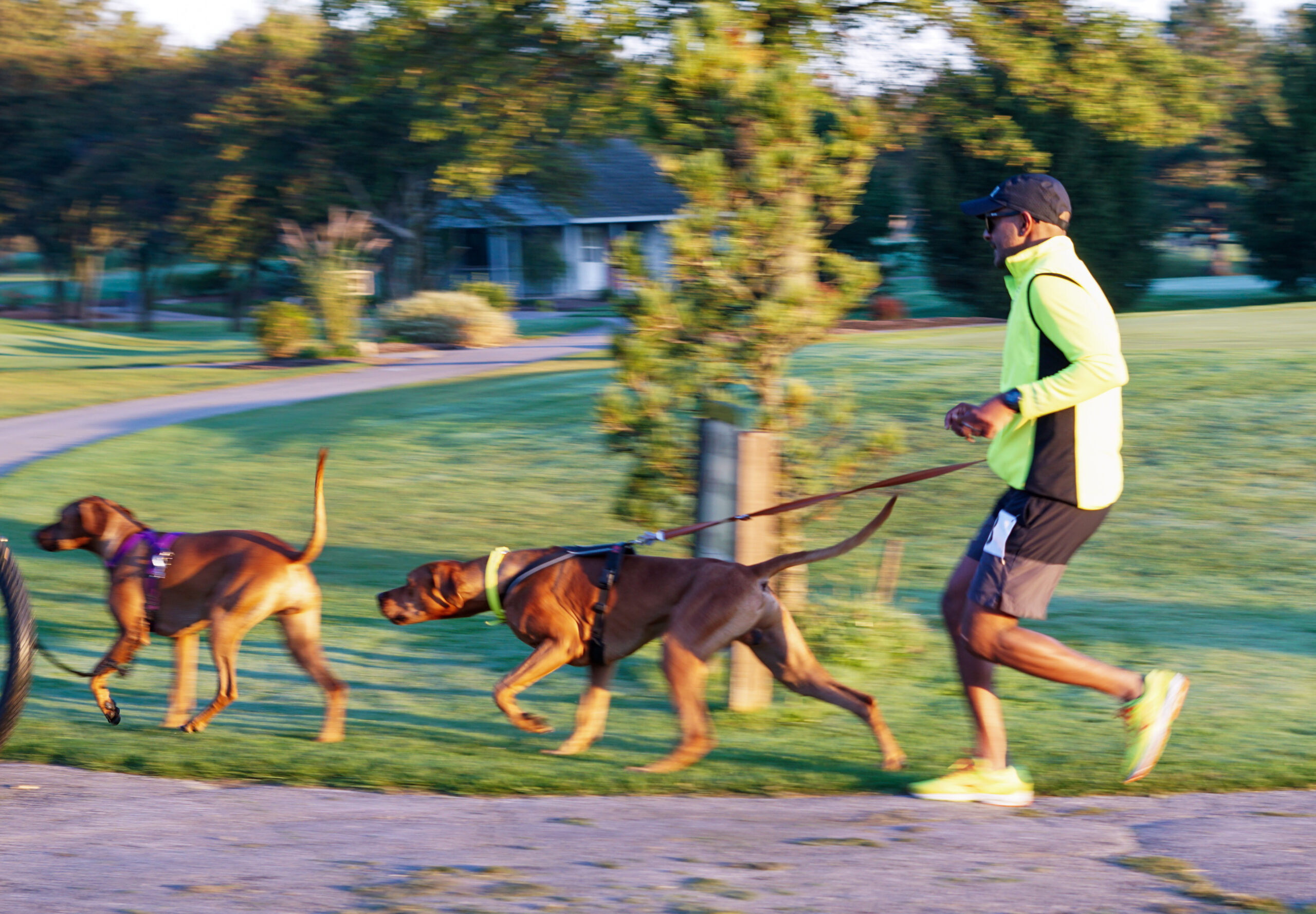 Colombo and Chris at the Endurance Trial. Colombo enjoyed running behind other dogs. He started lagging behind when there wasn’t anything interesting to keep his attention.

The 2019 RRCUS National Specialty was held in Huron, Ohio. Chris, his father (who was visiting from overseas), Zara, Colombo, and I drove there from North Carolina. We allowed about a week for the trip and made a few stops along the way. Thankfully, early October in northern Ohio was MUCH cooler than it had been in NC. The temperature was in the 50s the morning of the Endurance Trial, which was perfect for running.

We had to get to the site at 6AM to get checked in and ready to go before the run started at 7AM. I had known that there would be vet checks during the event, but I hadn’t really looked into what they would include. The vet had to examine the dog’s pads, check their heart and respiratory rate, look at their gums, and take their temperature during each check. Colombo hates visiting the vet and is very anxious about people “inspecting” him. Needless to say, he was not pleased about having his temperature taken via a rectal thermometer at 6AM. I was not sure that he was going to allow that three more times.

Colombo’s littermate Izzy and his father Sam were also there to do the ET. Izzy and Sam’s owners both biked. I think there were more owners biking than running, but biking with Colombo would make me nervous. He’s way too prey-driven for that. I’d worry that he would be able to pull me over much easier on a bike. 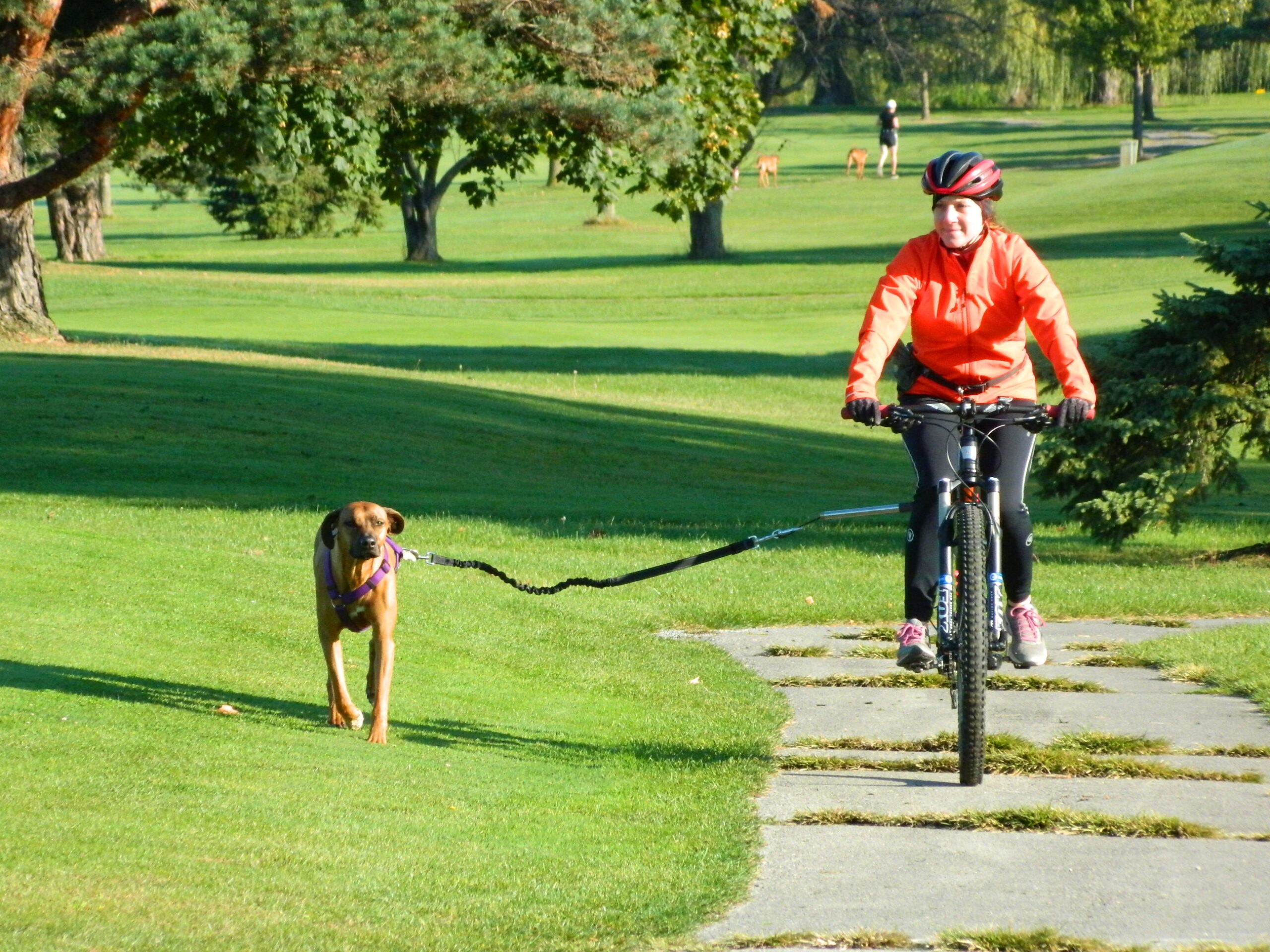 Chris ran the first four miles with Colombo. He said that Colombo was excited about being around the other ridgebacks and they were going at 7:30 pace at one point. After he returned, we did the vet check, which was still somewhat traumatic, and then I set off with him for the next four miles. I noticed that Colombo would start to lag behind if there wasn’t another dog in front of him. You’re not allowed to pull your dog along during the trial, so I was worried we’d get disqualified if he started to slow down too much. Prior to the event, we had done almost all of the runs with him and Zara together. We assumed that Zara was not able to run with us too, but we found out later that she could have. Oh well.

After I came into the transition area with Colombo, the plan was for Chris to run the final four miles with him. I didn’t think I could handle it because of my knee. Chris tried to get Colombo to go with him, but he would not. He’s very attached to me and after running four miles with me, I suppose he got concerned about leaving me. He actually sat down on the course and started barking at me! He refused to go with Chris.

We were both frustrated and conscious of the time limit, knew we needed to make a quick decision. We had not driven nine hours to Ohio for Colombo to not finish the run because he didn’t want to leave Mommy! I asked the organizers if I could run along with them, and they said yes. So all three of us went out for the final leg.

I had not run more than a few miles in a month, so I was lagging behind. However, I couldn’t lag behind too much or then Colombo would think I was leaving him again. Miraculously, my knee did not start hurting again. Finally, all three of us crossed the finish line! Chris’ dad and Zara were waiting for us. 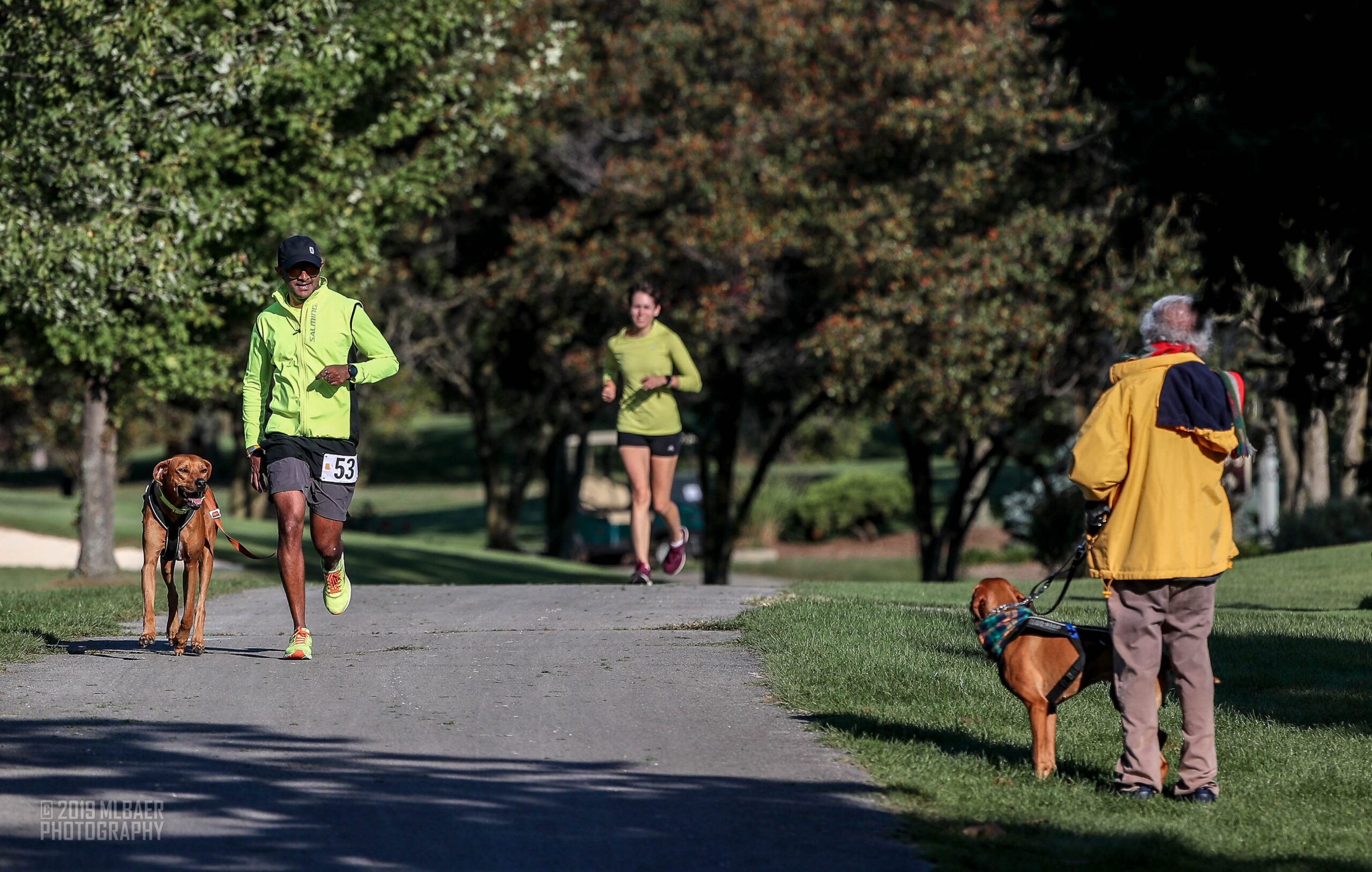 The end of the race. Chris and Colombo finish strong while I trail behind. Chris’ dad and Zara greet us at the finish. Photo by Mark Baer.

By the last vet check at the end of the run, Colombo barely seemed to notice the temperature check. He passed with flying colors and received a certificate and ribbon. It was a fun event and Chris and I both enjoyed it. Colombo had no issue running the 12 miles, even though we had not gone longer than eight in training. Even later in the day, he had plenty of energy to annoy Zara. :)

The Endurance Trial and National Specialty were canceled this year because of COVID-19 but the 2021 event is in Pennsylvania. I may go to that; we will see. If you enjoy running or biking with your ridgeback, I definitely recommend looking into it. 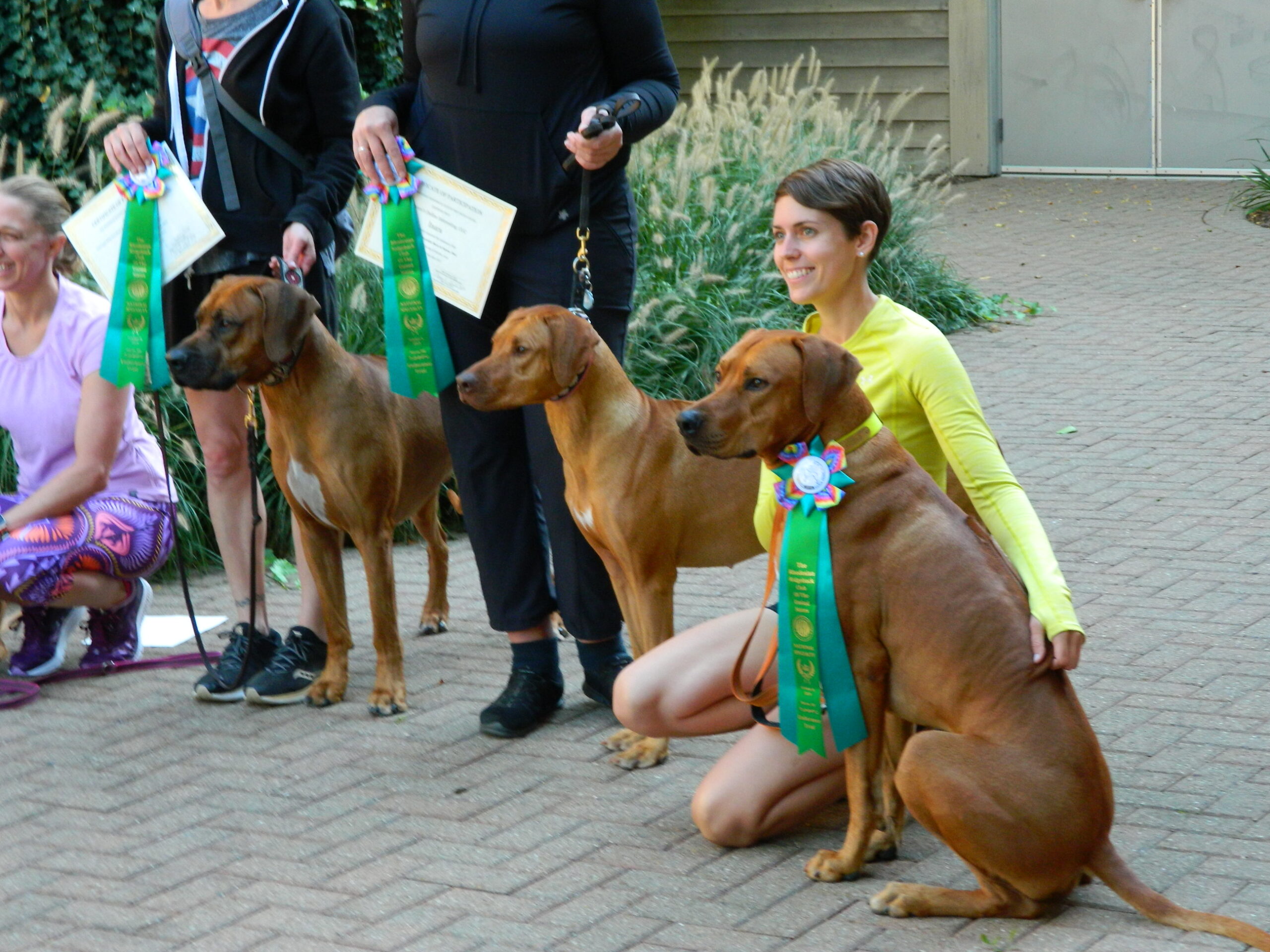 Colombo and I pose for a photo with the other people and dogs who finished the ET.

“Watching a broke dog is a sight to behold. I've

The grumpiest pups...even though they had a great

Just matching with my baby girl at NAVHDA training

Flashback to this green-eyed baby with no white ch

Transformation Thursday: 3 years ago vs a few week

When Mommy makes you pose for photos in the middle

Throwback to the beach last week! It was so nice,

This site contains affiliate links. As an Amazon Associate I earn from qualifying purchases.