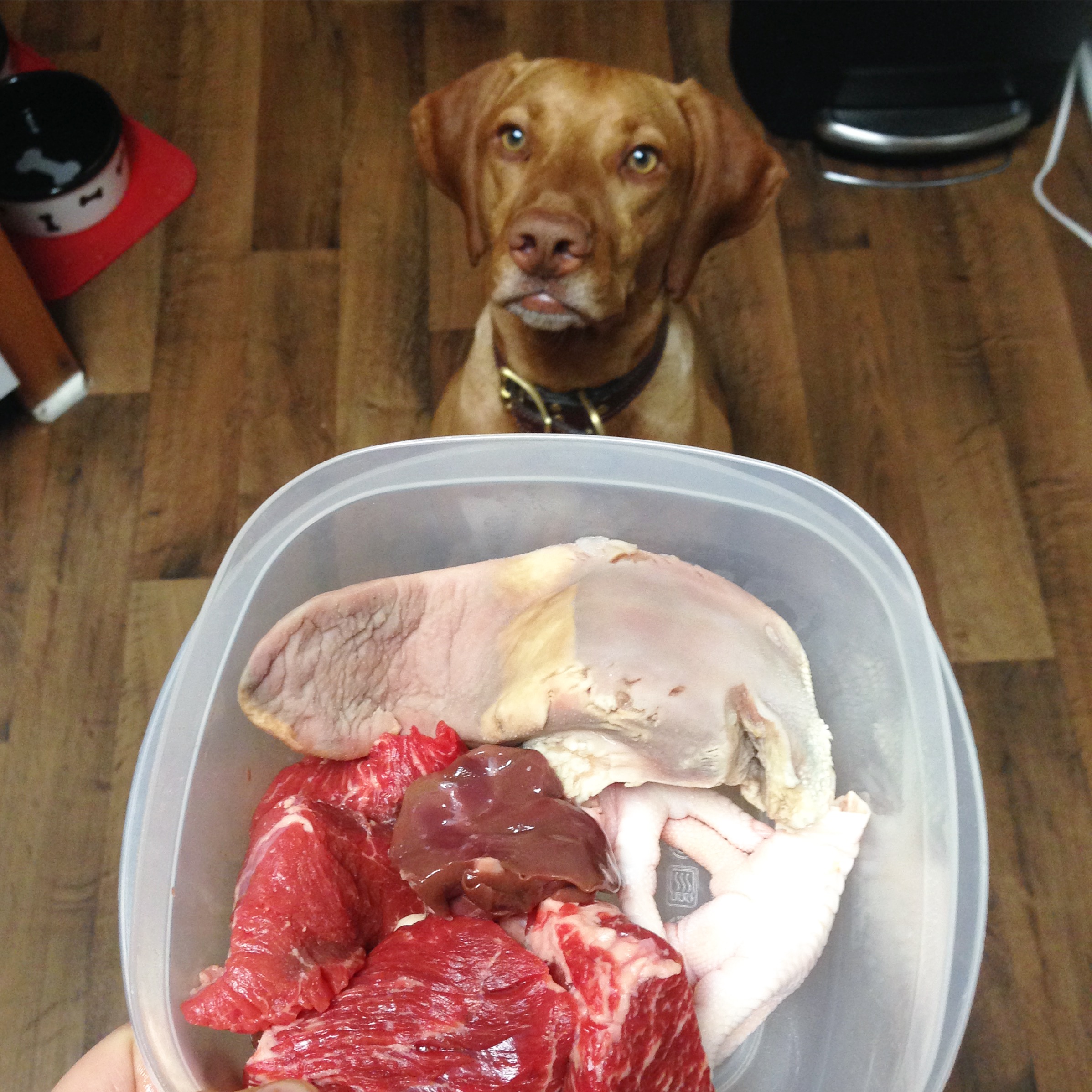 Zara has been eating the prey model raw diet for about six months now. After months of struggling with her diet, I finally switched to a pre-packaged raw diet in April and then to prey model raw (80% boneless muscle meat, 10% bone, 5% liver, and 5% other secreting organ) in August. I’m pleased to say that she has responded really well to it. She has kept a consistent weight, her poops are regular and firm, her coat is shinier, and we have not had any unexplained vomiting issues (except as noted below but those not are not unexplained).

The diet does involve more planning than feeding kibble, but hasn’t been too much work for me. I typically shop for her food once a week, on Sunday, and prep a week’s worth of meals that evening. I put each meal in a Tupperware container (I purchased 14 Rubbermaid containers from Bed Bath and Beyond to use for this purpose) and half go in the fridge and half go in the freezer (to be pulled out and defrosted as the week goes on).

The key to the prey model raw diet is variety and being able to find enough organs. I alternate between shopping at two different stores: an Asian grocery store and a local store that specializes in meat. Both of these stores butcher in-house so the meat is fresh and you can find a lot of cuts that aren’t available at a regular grocery store (chicken feet, pork tongue, lamb kidney to name a few). :)

The hardest thing for me to find is the “other secreting organ” which must make up 5% of the diet. Liver is usually easy to find at either one of the stores or even Harris Teeter (they usually have beef or calf liver). Usually the other organ I feed is kidney but I have bought pork ovaries. The Asian store also has testicles in their frozen section but I haven’t been adventurous to buy them yet haha. 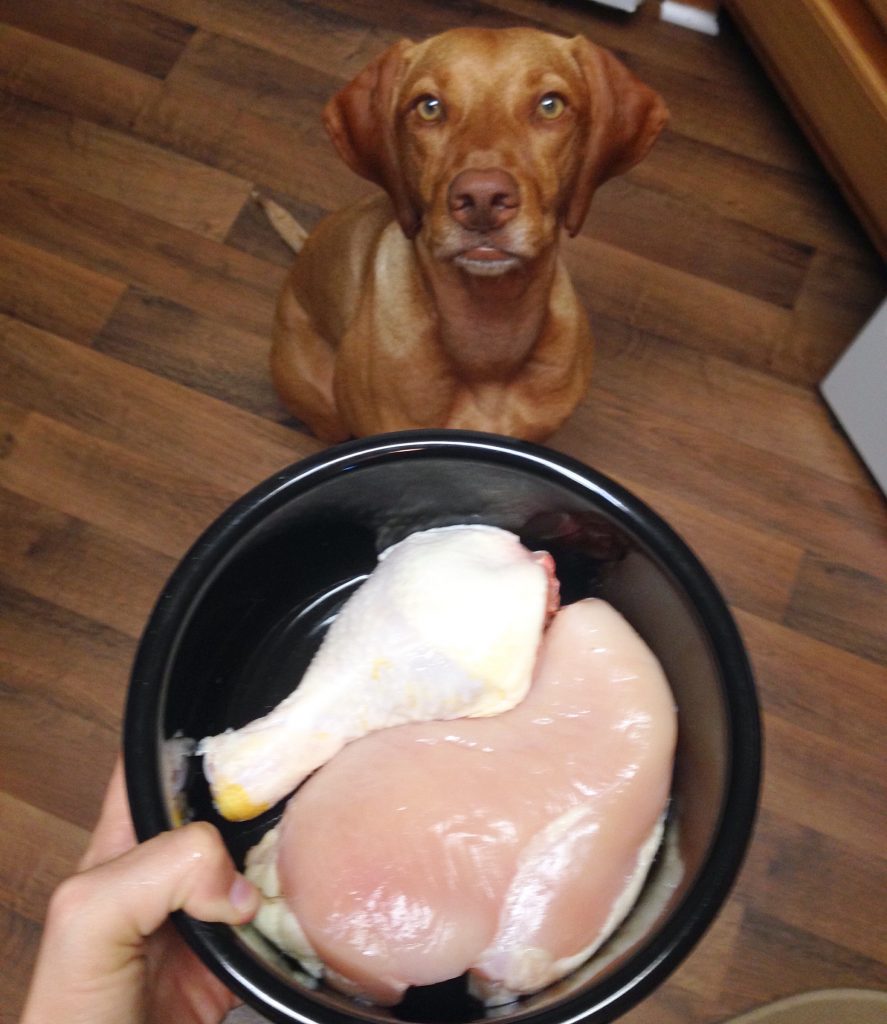 Zara’s first raw meal! Chicken leg and chicken breast. We started slow with all chicken and gradually added in other proteins.

You can feed lots of different bone-in meats to fulfill the 10% bone requirement. However, I’ve found that a lot of bones are too hard for Zara and I’m afraid she will crack a tooth. Anything from a chicken, duck, rabbit, and Cornish hen is fine. Turkey necks are okay but the other turkey bones are too big. I don’t feed her any cow bones and the only ones I’ll use from pigs are tails. A bigger dog could probably handle some of the other pork or turkey bones.

In addition, I feed her canned sardines about twice a week to add Omega 3s to her diet. This is recommended if the meat that you feed your dog is mostly from grain fed animals. I assume Zara’s is, because I usually do not buy organic or free-range meats (at least they are not labeled that way). I also added in some vegetables (minced broccoli or kale) to bulk up her stool. She had to have her anal glands expressed about two months ago and our vet noted that since raw-fed dogs’ poops are usually smaller than kibble-fed dogs, they don’t always express the glands naturally. So now she gets some vegetables once a day and she hasn’t had to have that lovely procedure done since then. 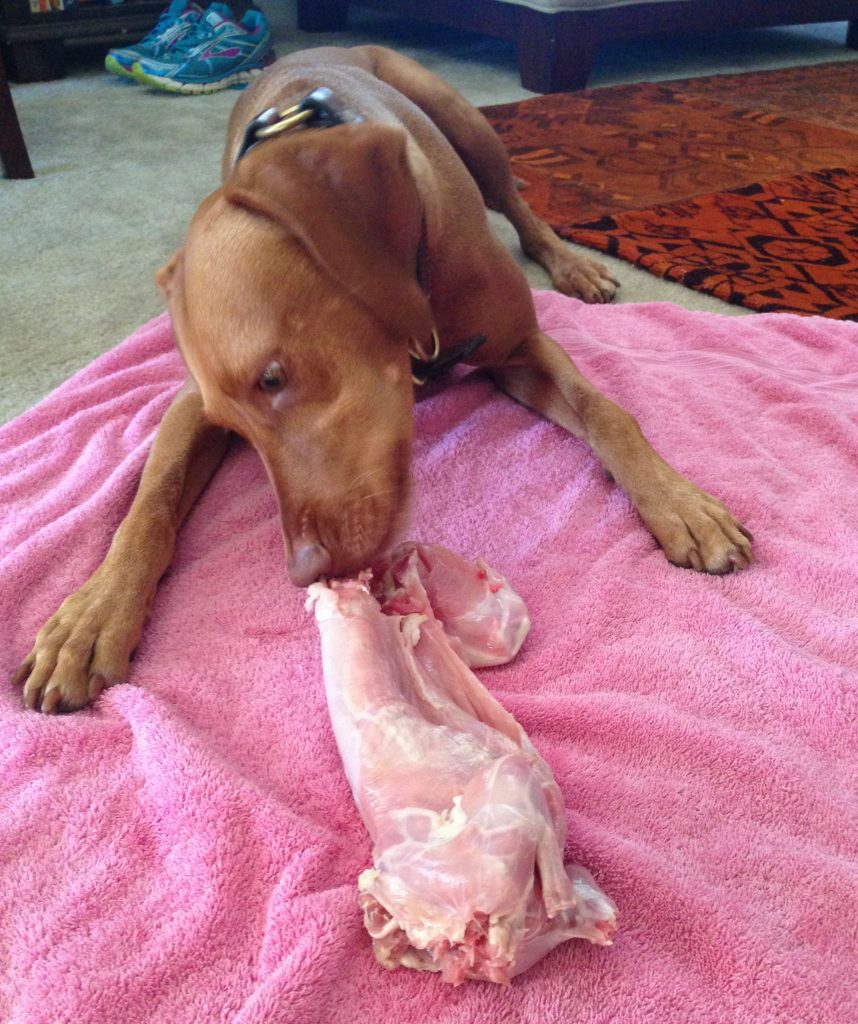 A whole rabbit for her birthday!

I definitely spend more money on her food than when she was on kibble. That cost varied from $55–$75 for a 30 pound bag of food that would last about 5 weeks. Now I spend about $120-$155 a month. I could probably get it down a little less if I really focused on buying the cheapest cuts. Part of the reason it’s so expensive is that instead of eating 2-3% of her body weight, she eats 4.5%! Many people would envy Zara’s metabolism. So if she was eating in the “normal” range, the cost would be more like $53 to $103. That’s pretty comparable to a high-quality kibble.

I’ve also learned that Zara gets the “hunger pukes” if we don’t feed her often enough. This can occur in raw-fed dogs because raw tends to digest faster than kibble. She would occasionally throw up a bit of yellow bile around 4 or 5pm when we first started the diet.  I looked it up and apparently the bile starts to irritate the stomach when it is empty. Now I feed her a small lunch around noon to ward off the vomiting. Since I work at home, this is doable on a daily basis. 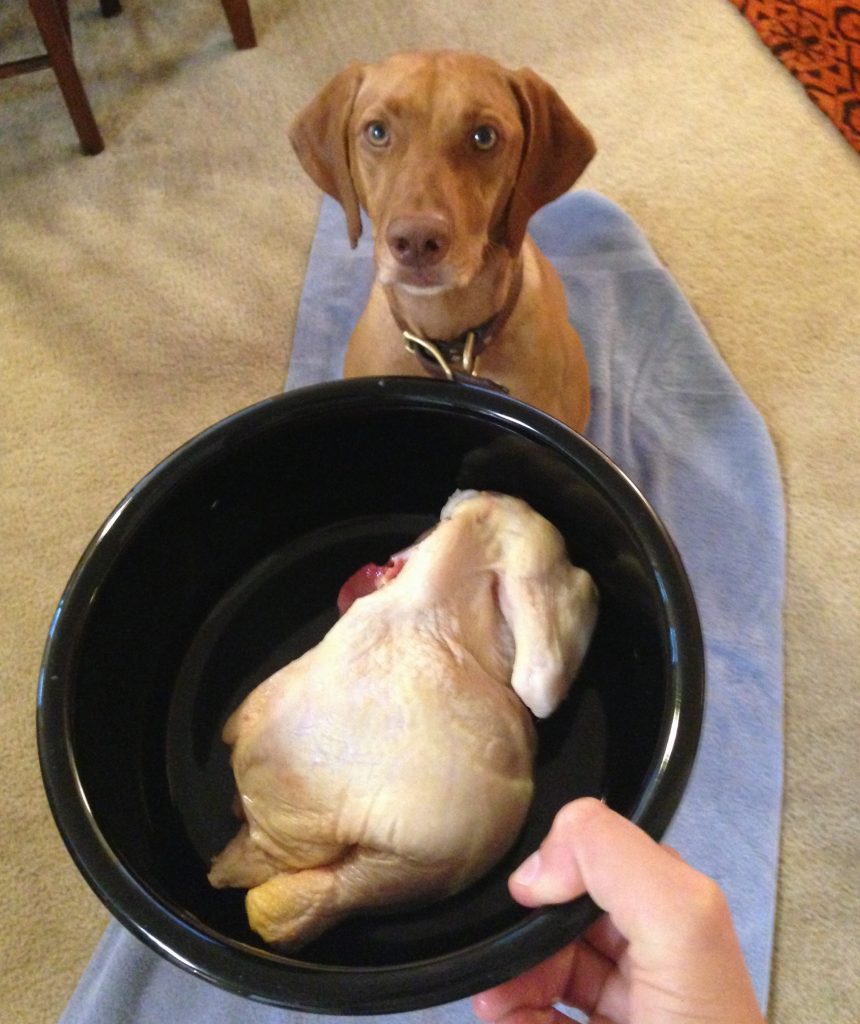 Half a Cornish hen for Thanksgiving! The humans also enjoyed Cornish hen, but we cooked ours. :)

All in all, I’m happy with how Zara is doing on this diet. It’s a little more work, but I think it’s worth it. If you’re interested in finding out more about raw feeding, I recommend checking out Perfectly Rawsome. They’re a great resource.

We got the results from Zara’s ear mass biopsy.

Zara and Colombo are earning their AKC Trick Dog N

A Christmas babushka 🎄 — Zara is doing well a

Tomorrow Zara is having a small growth removed fro

Is the long weekend already over?! 😩 — #sunda