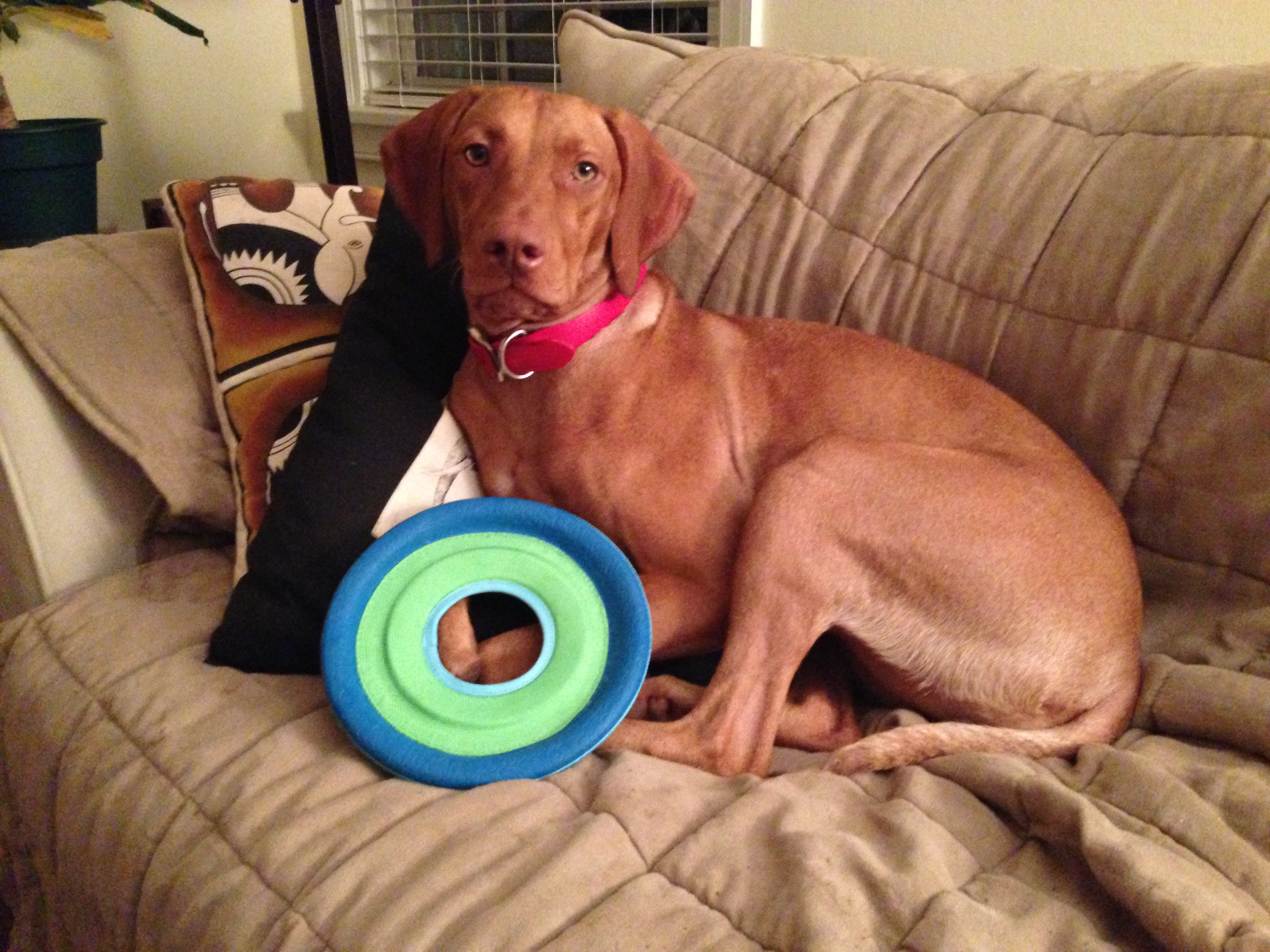 Image above: Zara with one of her Christmas presents, a frisbee made by Chuck-It

Merry (belated) Christmas and happy 2015 from Zara, Chris, and I! December seems to have flown by and I can’t believe that Christmas and New Year’s have already come and gone. The weekend before Christmas, we drove up to my aunt and uncle’s house in Pennsylvania to celebrate with that side of my family. My aunt and uncle live in a very old house (the original part was built in 1760!) on a few acres of land. Their yard is not fenced, but their house is set back far enough from the road that there is plenty of protected space. After we arrived, we let Zara run around their yard. We brought her mini soccer ball and spent some time kicking it for her to chase. She was having a blast. Then my cousin arrived with her dog, Wrigley, who is a six-year-old German Shorthaired Pointer (very similar to a vizsla). Wrigley and Zara met last Christmas, but Zara was only about 10 weeks old, so the two of them didn’t play together.

As soon as Wrigley arrived, she started sprinting around the yard. Her and Zara were going full speed! Zara is fast, but Wrigley was actually faster than her. She has longer legs, is a little more muscular, and has several years of running under her belt. After a while, we took them inside because it was rather cold. 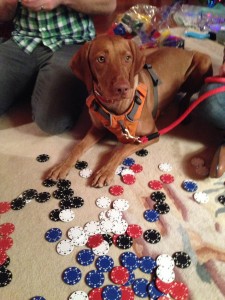 For the most part, Zara was well-behaved. However, cousins have several kids and there were two two-year-olds. Zara loves children but she mostly just loves to lick them in the face which they don’t enjoy. So there were several bouts of licking and crying and she even knocked over one of the two-year-olds on his back. Guess we’ll need to work on that if we decide to have kids.

Zara loved my aunt and uncle’s yard so much. Chris and I spent the night and the next morning, she kept wanting to go outside to run around. I think she was sad to leave.

On Christmas day, Zara enjoyed opening presents. We gave her a plastic Frisbee that’s made by West Paw Design. This line of toys is supposedly indestructible and they will even replace a toy that has been chewed. We have two more of the same kind (the Tizzi and Bumi) and they are great. She is able to destroy most things so toys like this are definitely worth the money (and they aren’t expensive). She also got another frisbee by Chuck-It.

On New Year’s Eve, Chris and I went to a party but we didn’t take Zara. However, she got to go on a New Year’s Eve hike with me earlier in the day and was quite tired by the time we left. :)

2. Convince Mommy and Daddy to play with me more.

3. Convince Mommy and Daddy to feed me more treats.

Hope everyone has a good start to the new year!