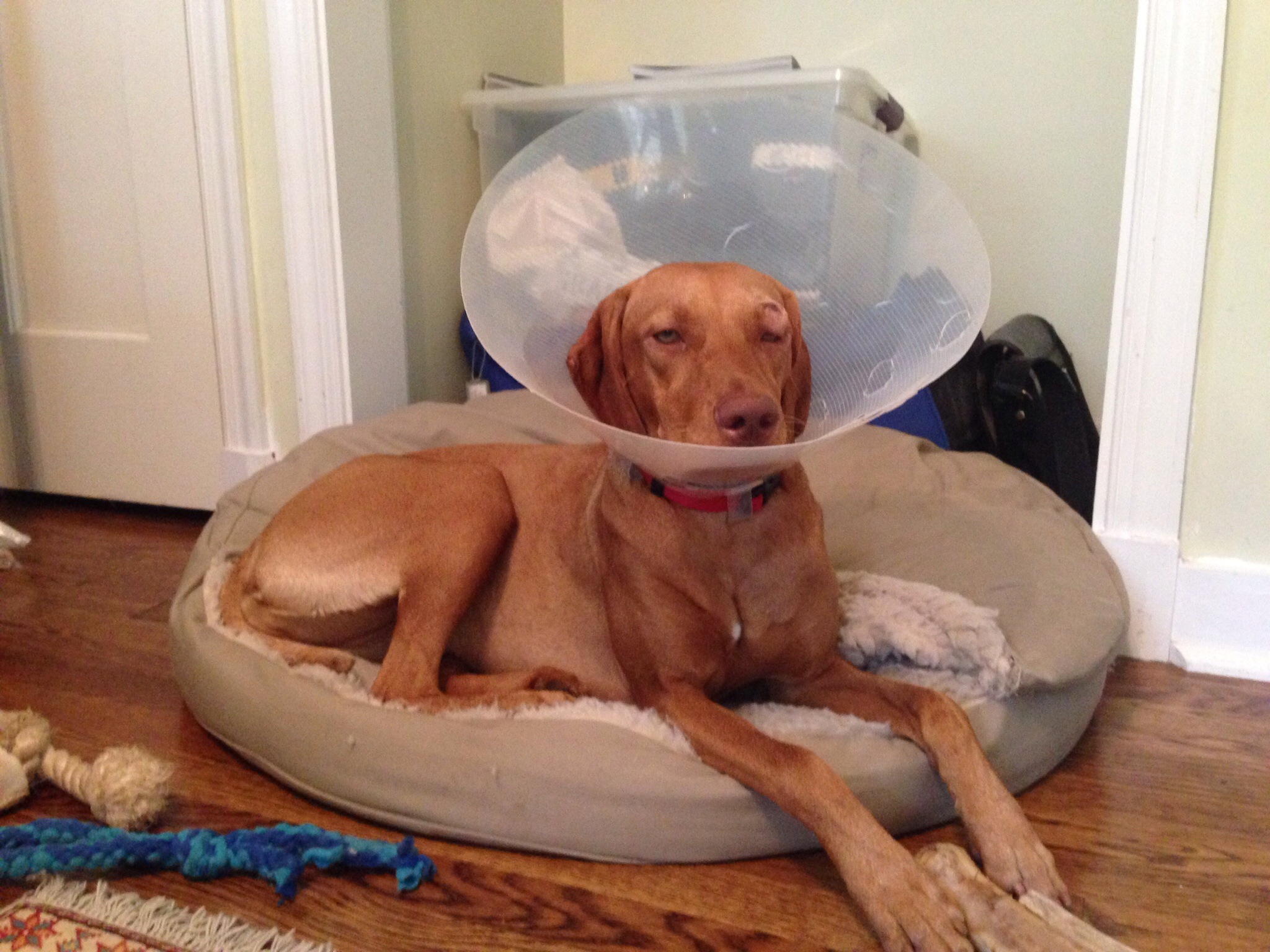 We had a rough weekend. On Thursday night, Zara was bitten by our neighbor’s dog and she has a shallow puncture wound above her left eye. She has to wear a cone until Tuesday and is on two different antibiotics. :( Needless to say, cone + energetic vizsla puppy = challenging times.

On Thursday evening, Zara and I were outside in the front yard when our neighbor walked by with his dog, a seven-year-old boxer. He greeted Zara with an enthusiastic “Hi, Zara!” even though I remembered only meeting him once. We chatted for a few moments and Zara and the boxer sniffed each other through the fence. Zara was doing her usual wiggle-butt, excited greeting but the boxer was ambivalent. The previous time Zara had met her, we tried to see if they wanted to play but the boxer showed no interest in Zara so they continued on.

This time, the guy said, “Do you want to try again?” indicating that he wanted to see if his boxer wanted to play in our yard with Zara. I agreed to it, though in the back of my mind, I was a bit hesitant, partially because it was almost dark.

He let his dog in the gate and took off her leash. She just stood in one place for several minutes while Zara wagged her tail submissively. The boxer showed no aggression and Zara wasn’t even being a real pest, like she can be with some dogs she wants to play with. The next thing I knew, the boxer was attacked Zara’s head while Zara was belly up on the ground. Zara wasn’t really fighting back. We managed to pull them apart after a couple seconds, at which point our neighbor became super apologetic and started yelling at his dog. I took Zara inside the house and Chris and I checked her over. She wasn’t really bleeding but she had a puncture above her left eye. It didn’t look that bad at first, but Chris was insistent that we take her to the animal hospital (good thing he was). He had totally gone all papa bear and was yelling at me for letting a dog we didn’t know into the yard. We told the neighbor and he apologized and said he would pay for any medical costs.

We drove to the emergency vet, which is luckily only about 10 minutes from us. They took Zara in and then we just had to wait into waiting room while they checked her out. It was a very nerve-wracking experience because every other time I’ve been to the vet, I always get to go into the room with Zara. This place (at least after hours) was more like an ER for humans.

A technician checked in with us and she said that overall Zara was doing fine but they needed to sedate her and shave the area around the wound to look at it more closely. After an hour or more, the vet came to talk to us. She said that the bite was pretty shallow and didn’t puncture Zara’s eye at all. She did a corneal wash to check for any damage but didn’t see any. She said that Zara would have to wear the cone for 5 days and she gave us an oral antibiotic and a painkiller.

After speaking with her, another technician brought Zara to us and she looked drunk because she had been sedated. She wagged her tail when she saw us but she was stumbling around and clearly wasn’t herself. I pulled her into my lap and held her while we waited for the paperwork to be finished. It was so hard to see her like that and I felt awful that I had let another dog hurt my baby.

We went home and Zara went right to sleep. On Friday morning, her eye was swollen when we woke up and looked a lot worse. The sedation had worn off but I think she was confused that she was wearing a cone and that she couldn’t see fully out of her eye. Thankfully, I was able to work at home on Friday to watch her. A few hours later, her became even MORE swollen and I took her back to the animal hospital to make sure everything was okay. The vet said that everything looked fine and it was normal to have a lot of swelling around the eye. Just to be safe, she gave me an antibiotic eye drop as well. That was reassuring, but by Friday night, Zara’s eye was almost the size of a golf ball. It just looked awful. She also managed to break open the wound on Friday night and it started oozing. I think she was getting frustrated with the cone and the wound was itching. 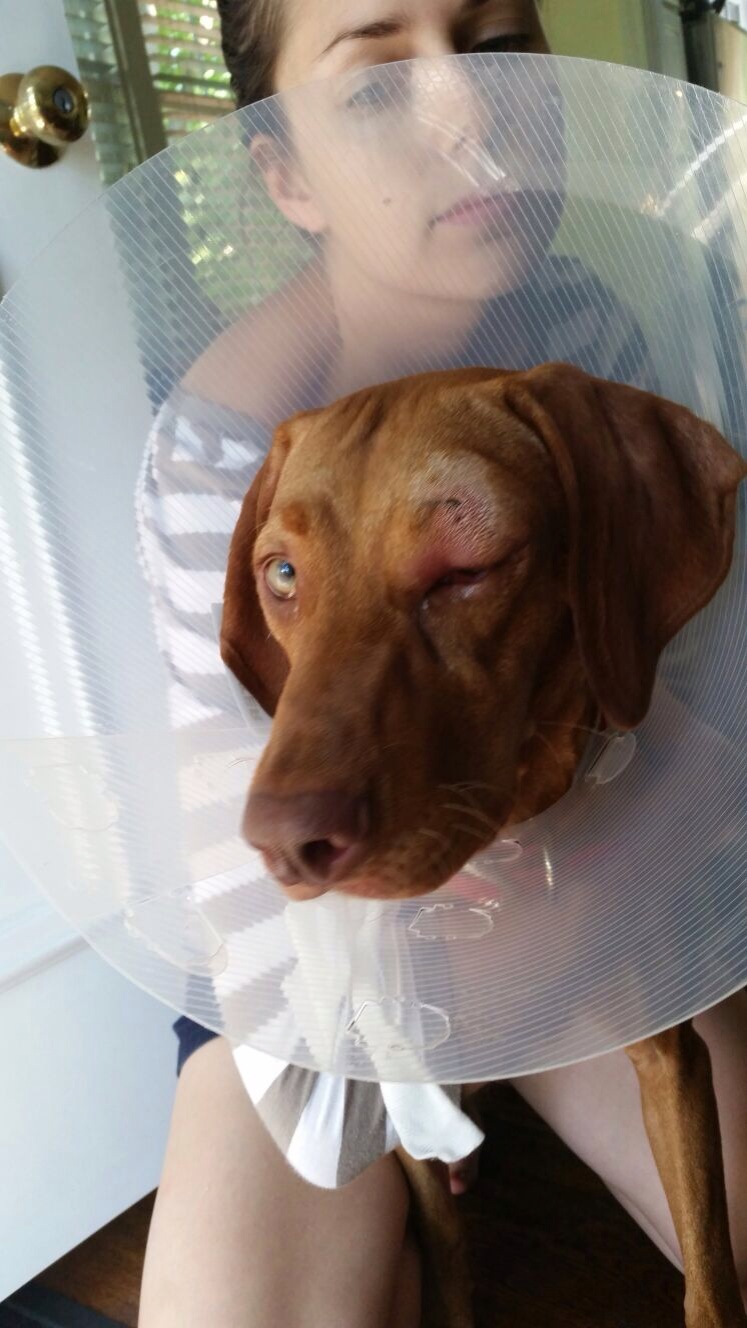 On Saturday, the swelling had gone down a fair amount, which was a relief. Two days later, it is looking even better. Overall, she has been really tolerant of the cone and a trooper throughout the whole process. I feel bad for her because having a plastic lampshade around your head in the summer can’t be comfortable. We only have one more “required” day of the cone but I think we will have to reevaluate tomorrow night on whether to keep it on longer. We’ve had to watch her like a hawk because she’s figured out how to get her back leg inside the cone to scratch her face. Any time she starts scratching at her eyes or ears, I have to jump up and go scratch the itch for her otherwise she might break open the wound again. 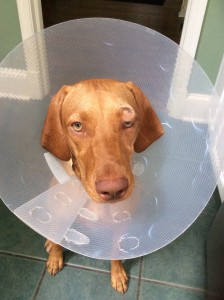 Her energy came back today with a vengeance and she has thrown several fits of high-pitched yelping. With this type of injury, we can’t go to the dog park, we can’t play tug of war, we can’t play fetch (although I have been, gently), and she can barely chew a bone because it’s hard for her to hold it with the cone in the way. We can go on walks but they don’t really tire her out much. Let’s just say I can’t wait until we can resume our normal activities. I think we’ve gotten a taste of what an unexercised vizsla can be like – and I am not a fan.

On another note, the neighbor who owns the boxer gave us a check for her visit to the animal hospital, which we appreciated. However, I’ve also heard from other neighbors that his dog has attacked other dogs in the neighborhood. When I asked him if this had ever happened before, he said no! Clearly he should not have been trying to introduce his dog to Zara.

Anyway, the good news is, Zara is on the mend and hopefully this incident won’t leave too much of a scar (either physically or emotionally).