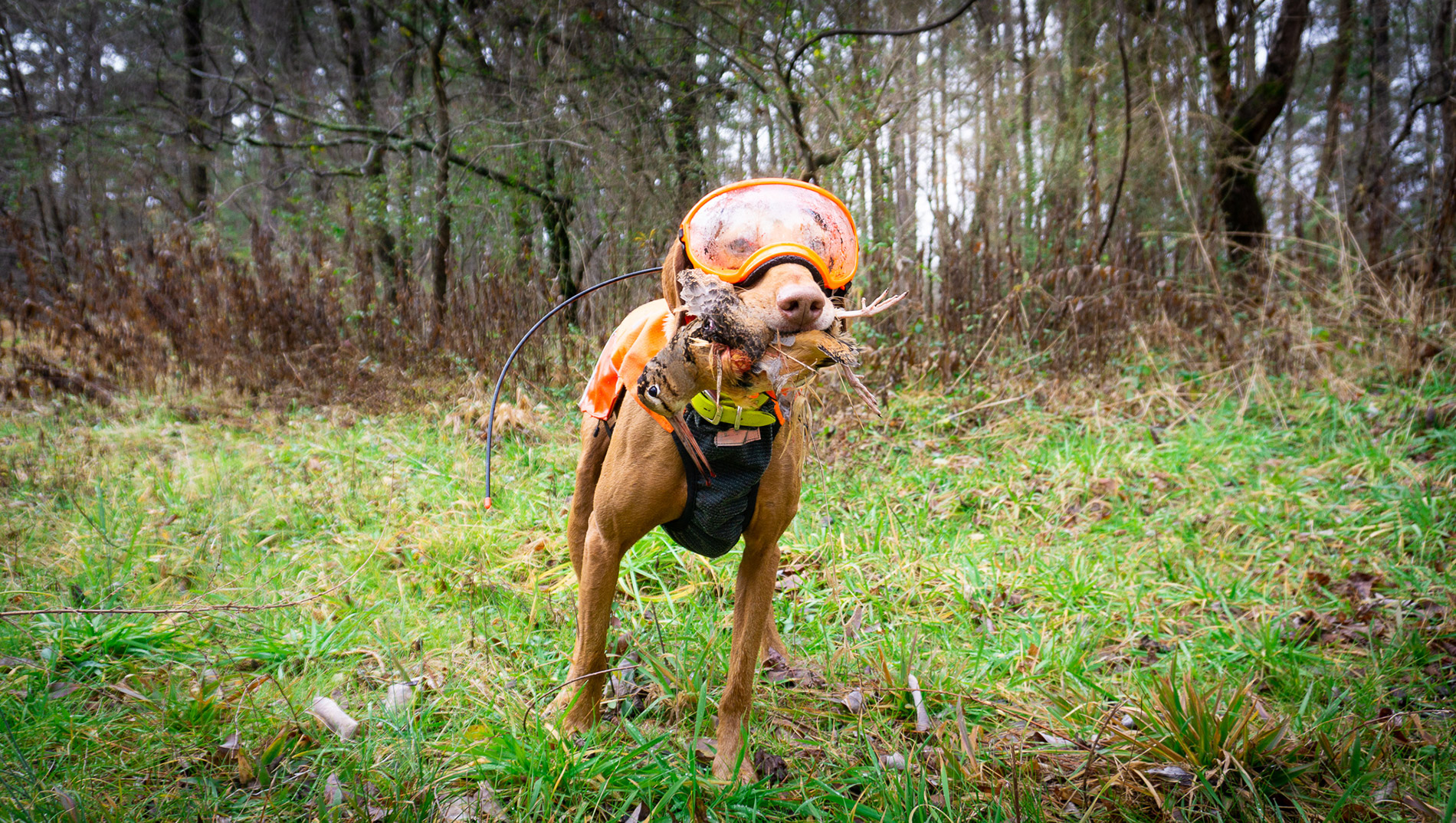 I never had any interest in hunting until recently.

That may seem like a weird statement from someone who’s been training her bird dog to hunt for the past four years. But what Zara and I have been doing is not hunting, at least not hunting for wild birds. All of the birds we use to train are pen-raised by humans. My initial goal, after Zara finished her AKC Junior Hunter title, was to train her to run in advanced pointing dog competitions, namely walking field trials. That goal clearly evolved over time, but my focus has remained on hunt tests and NAVHDA events.

Hunting was not something I even considered until very recently. I did not grow up hunting. My father used to hunt with my grandfather when he was younger, but all I heard were occasional stories. The one person I knew who did hunt was my uncle, who owned Brittanies and hunted ducks and deer. I remember thinking it was funny when my parents bought hunting equipment such as duck calls for him at Christmas. Hunting was not something I thought was cool.

After joining NAVHDA in 2017, I was around people who hunted for the first time in my life. They spoke of long drives to South Dakota and early morning hunts waiting for ducks in the swamp. I listened to their stories with mild interest. While most of them trained and tested to have a better hunting companion, that was not the case for me. Back then, hunting seemed unnecessary. Why did I need to hunt when I had access to pen-raised birds and tests to train for? That was enough.

Hunting also seemed out of reach because I had no interest in owning a shotgun, let alone trying to shoot it. After years of hearing about school shootings and attacks on innocent people by armed men, guns freaked me out. That was one of the reasons I was initially interested in field trials, because there’s typically no live gunning. Over time, attending NAVHDA training days and tests and watching the experienced members with their break-open shotguns, I became more comfortable.

I eventually became interested in learning how to shoot last year and I shot clays for the first time in January 2020. Needless to say, I was not a natural. After a lot of research and a struggle to find a shotgun that fit me, I bought a CZ Drake 20 gauge in October.

I went hunting for the first time in December 2019 with my friend Emily. We went out on public land looking for woodcock with Zara and her German shorthaired pointer Blitz. I didn’t own a shotgun at that point, but I thought it would be fun. Blitz located several woodcock that day. Although I called Zara over when Blitz went on point and commanded her to back Blitz, I don’t think she fully understood what was going on. I’d heard that woodcock smell different than other upland birds (such as quail or chukar) because their diet is primarily protein-based instead of fruit- and seed-based and it takes time for some dogs to recognize that. 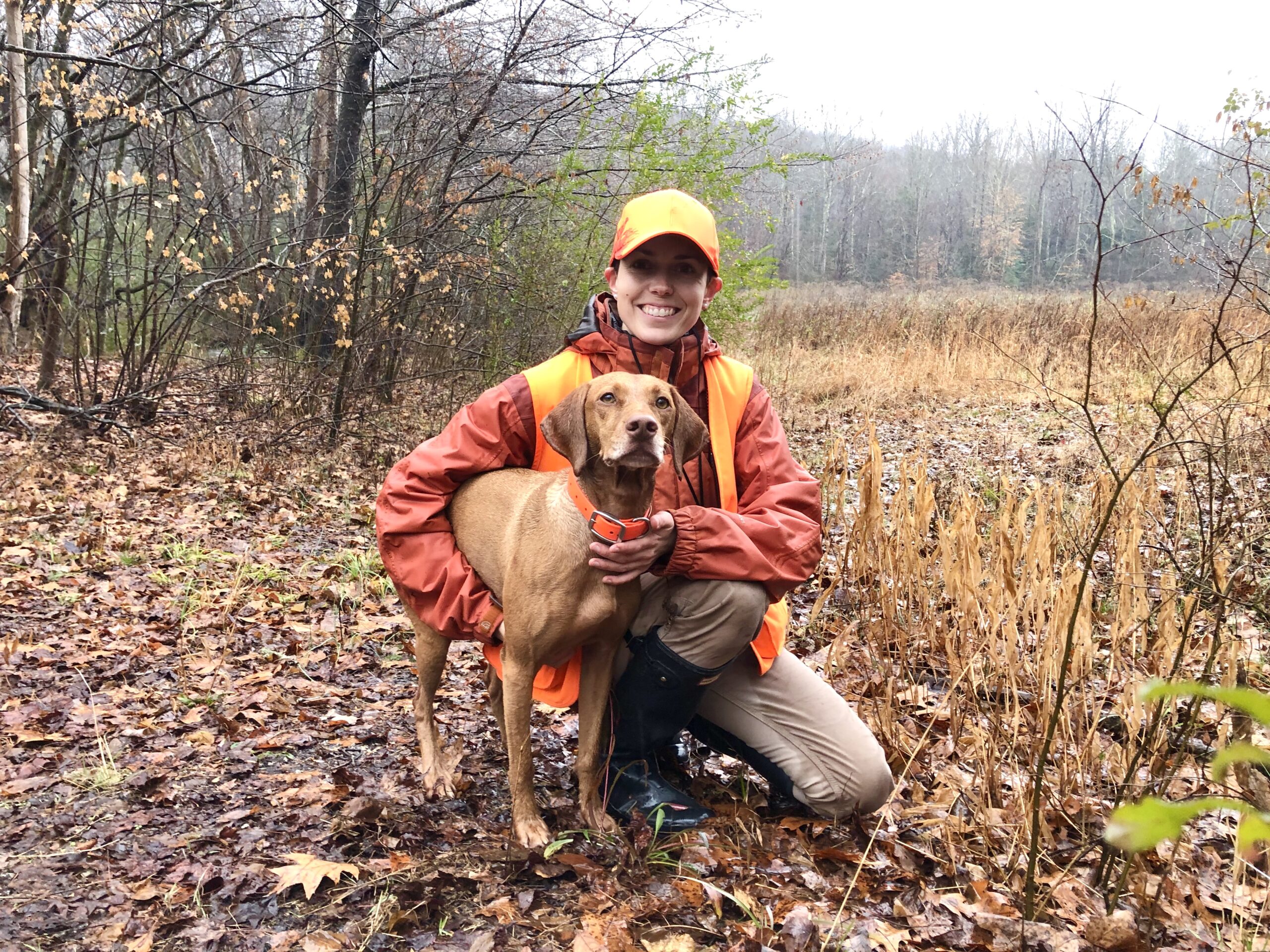 Zara and I after our first hunt. It was cold and raining but we did find several woodcock.

After several more months talking to NAVHDA people who hunt, listening to podcasts, and reading articles on the Project Upland website, I became more and more interested in giving hunting a try. Project Upland highlights the millennial hunter, the minority hunter, the female hunter, and the novice hunter with their first bird dog. Hunting suddenly started to see more achievable and dare I say, cool.

The COVID-19 pandemic also played a role. With bird dog competitions getting cancelled because of the virus, hunting seemed like an activity that was perfect for the times. What would be a better way to socially distance than spending a morning walking through the woods alone with my dog? Even hunting with one or two other people is fairly safe, given that you’re typically walking a ways apart.

Annoyed by the pandemic, I bought a Virginia hunting license and headed to a wildlife management area about an hour from my house when their season opened in November. Zara and I didn’t find any birds, but I enjoyed walking around and watching her work. We scouted the fields for quail and the thick woods for woodcock. 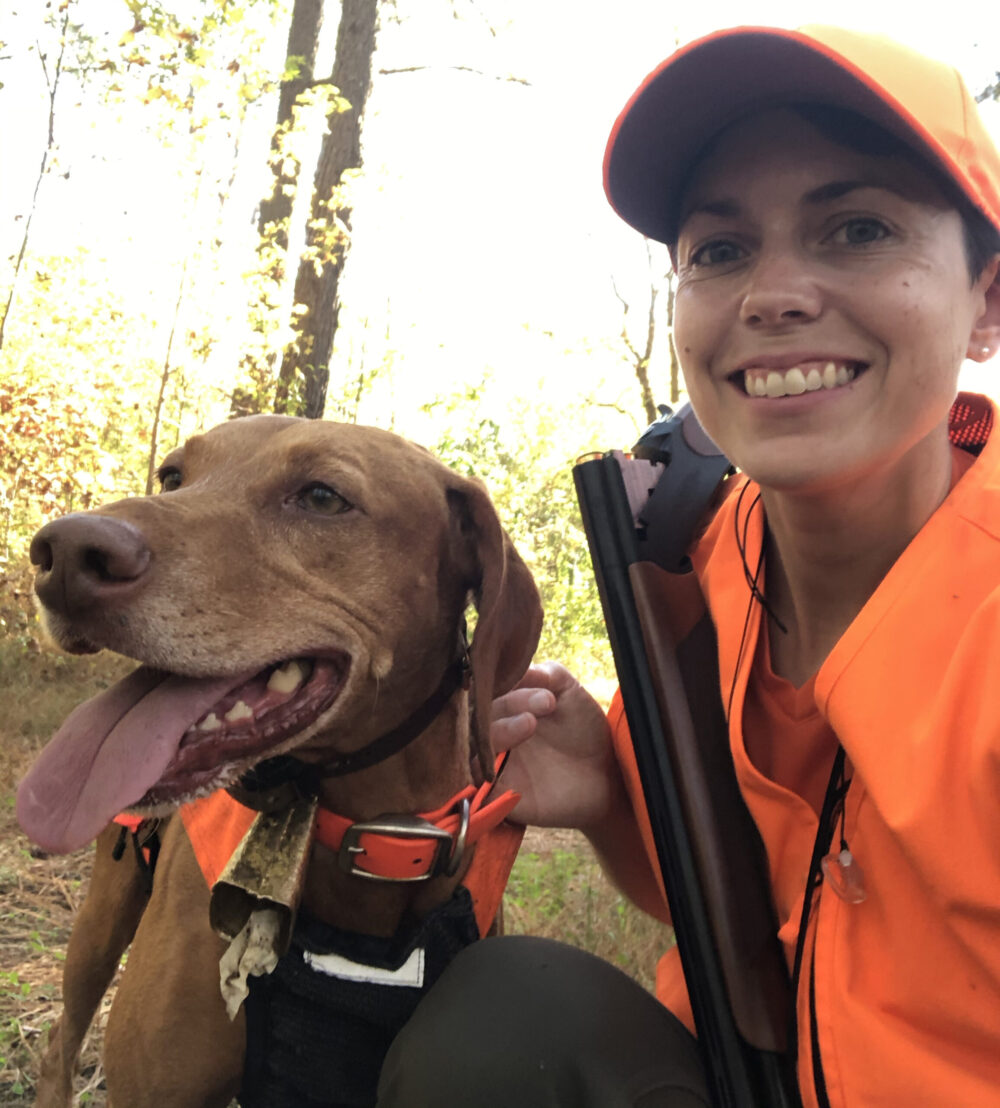 My first time hunting with my own shotgun. Unfortunately, we didn’t find any birds that day. 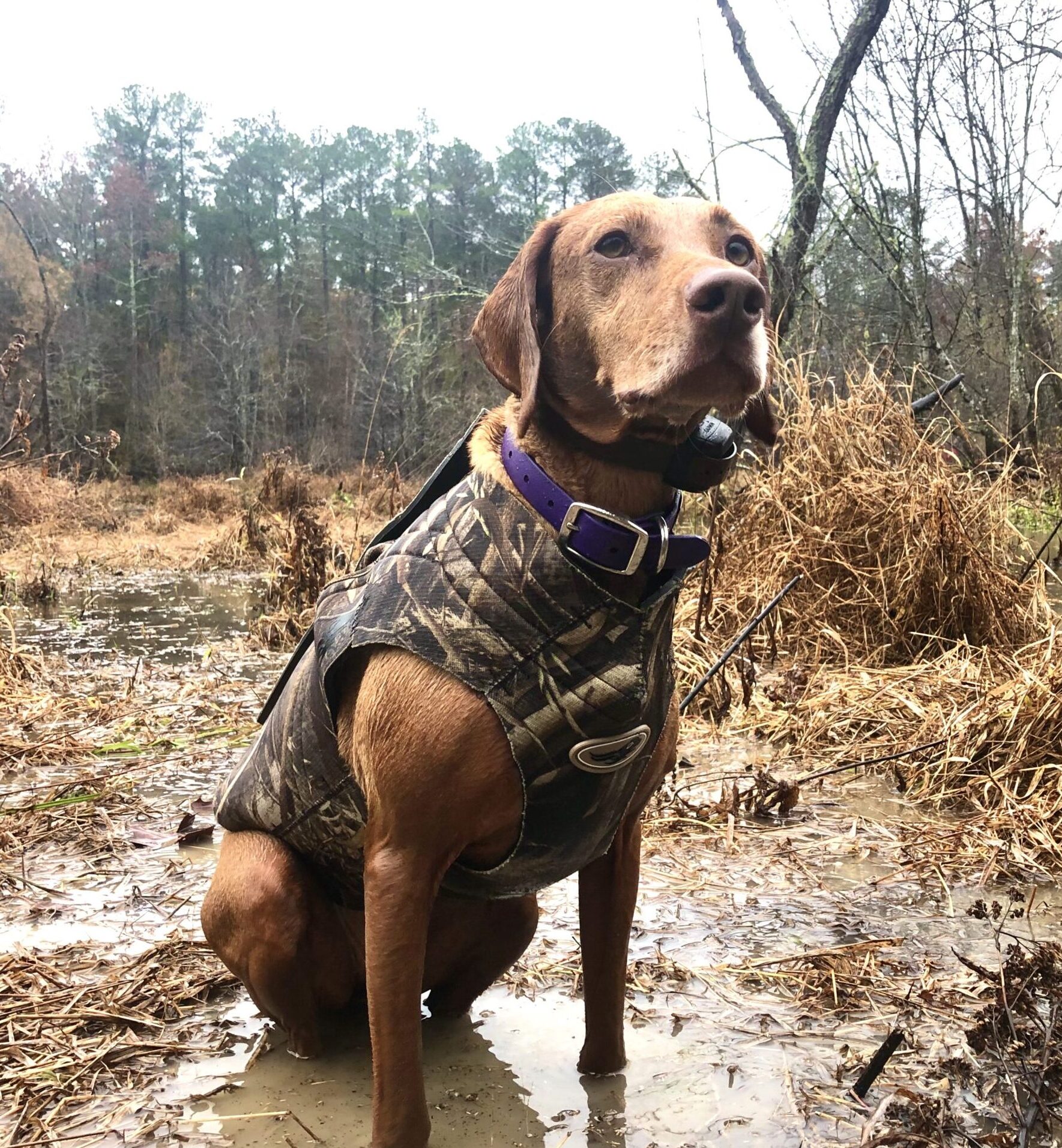 A friend invited us along on our first duck hunt in November. Zara did pretty well having to stay in one place for a long time. We saw multiple ducks and geese but I did not manage to shoot any.

Living in central North Carolina, woodcock are the probably the only wild bird worth pursuing (outside of ducks and geese). Wild grouse and quail are far and few between. But every year, woodcock migrate from the North to the South through North Carolina. Woodcock season in North Carolina typically runs from mid-December to the end of January. In late November, Emily and I went scouting for woodcock with Zara and Blitz. Thanks to Blitz, Zara finally got to smell a woodcock.

Blitz found multiple birds that day and on one point, I was able to call Zara into the vicinity. She stopped hesitantly, as if she wasn’t sure what she was smelling. Suddenly, I saw a woodcock get up a few feet in front of her. Zara saw it too and rushed toward it. She chased it through the woods. I was excited that she was able to have this experience.

The next time I went woodcock hunting with Zara, we saw a few woodcock. Although she did not point any, she started pointing the areas they had just been. I could assume this because I saw them land and then fly off from the same area. By our third time, she was finding and reliably pointing them. It was awesome to see such quick progress, especially for a seven-year-old dog.

Hunting woodcock with Gus the German wirehaired pointer, Aries the Deutsch Kurzhaar, and Zara. We didn’t see any birds that day, either.

Last weekend, I went out for a short morning hunt at a wildlife management area where I’d seen woodcock several times before. We hadn’t been to that spot in two weeks, and it seemed that the woodcock had migrated south. In the span of two hours, I only bumped one bird even though we were in the exact same areas we’d been before. Feeling annoyed, I decided it was time to leave. I recognized that this is one of the challenges of hunting – unlike with pen-raised birds, you have no idea where the birds are. Most of the time, that’s the fun part. But it can also be frustrating.

I pulled out my camera to take a photo of Zara when my GPS tracker told me she was on point. I put the camera down and hustled over to where it said she was. She was on point in a briar patch near a clearing. I closed my shotgun and got ready to shoot. All of a sudden, the bird flushed into the clearing. I shot once, missed, and shot again. The bird went down in the clearing and I was pretty sure I hit it with my second shot.

“Zara, fetch!” I shouted. She ran over to where the bird went down and went on point again. Even though I was pretty sure I hit it, I quickly reloaded my gun in case I needed to shoot again. When I reached her, I could tell that the bird was injured by the way it was flapping around. Zara sometimes points injured birds instead of picking them up right away. I encouraged her to fetch again, and she picked it up and brought it to me. I was so excited and praised her effusively.

I shot a woodcock! Zara wears RexSpecs to protect her eyes from the briars in the woods.

Now that I’ve gone hunting several times, own a shotgun, and have shot a woodcock, I suppose I can consider myself a hunter. I still feel a strong sense of imposter syndrome when I think about it (how can I be a real hunter?) but I’m adjusting to the idea. I have Zara to thank for this new hobby. It’s something I enjoy doing because I’m doing it with her. Watching your dog do the thing it was bred to do and seeing all the hard work of training pay off is pretty awesome.