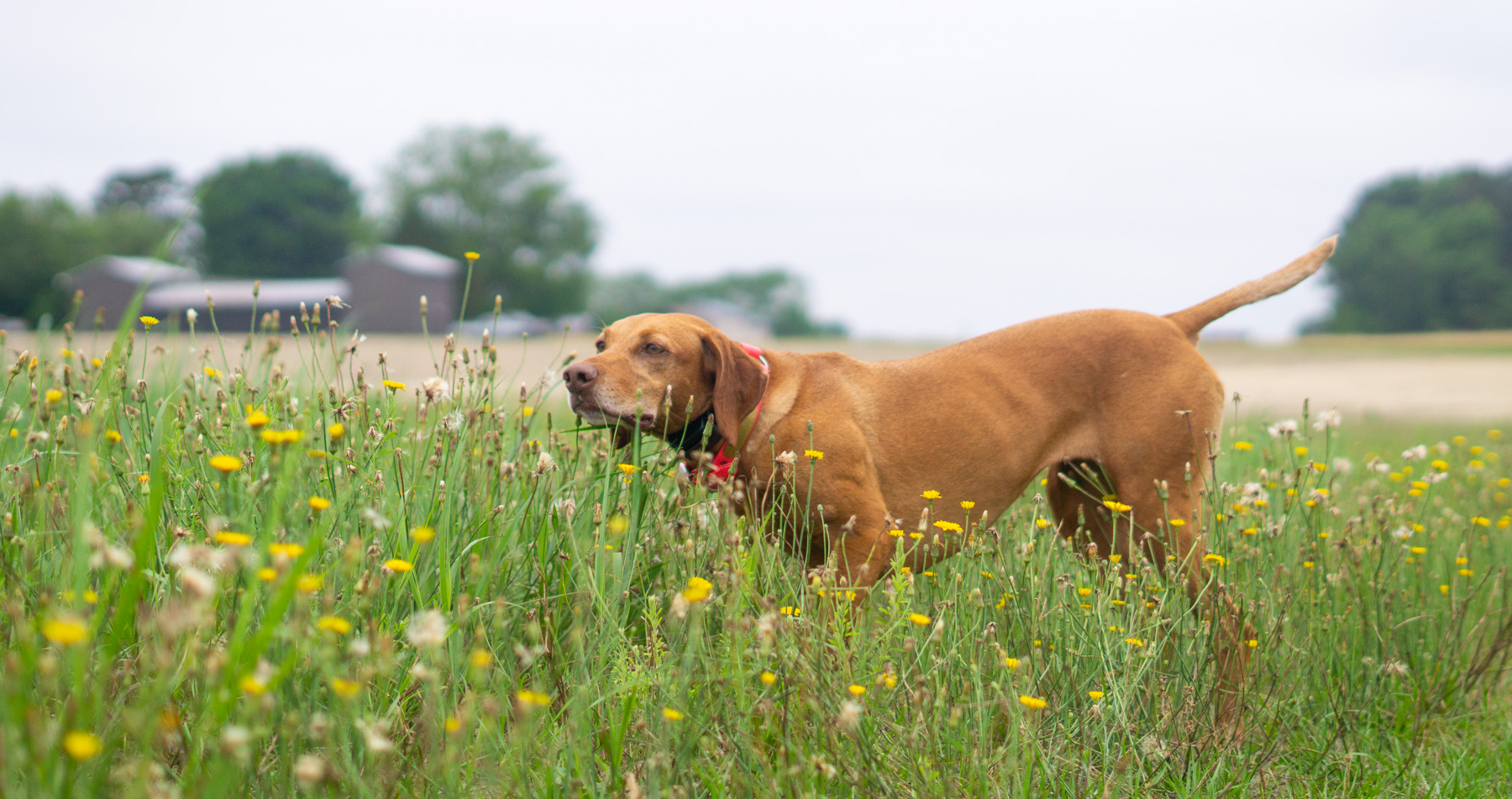 When bird dog people talk about hunt tests vs. field trials, it seems like the main distinction they emphasize is that hunt tests are judged against a standard, whereas field trials are competitive, and the dogs compete against one another. And that is a big difference. But after competing in both, I’ve become aware of the subtle differences that can have a big impact on your training.

Another large distinction between hunt tests and field trials is the running pattern of the dog. In field trials, you want a dog running straight out, in a forward direction. They can check back in with the owner, but they shouldn’t be continually coming back. The range of the dog depends on if the owner is on horseback or walking. If you are riding a horse, the dog’s range should be further out. The birds are usually planted along the edges of woods or fields.

In hunt tests, dogs are typically searching a bird field where birds are planted in the middle. The running pattern used in hunt tests is called “quartering” – where the dog runs back and forth in a “windshield wiper” type pattern to hunt for birds. They do not need to be far from the owner. In fact, in some of the hunt tests I’ve gone to, the dogs hunt very close to their owners.

If you want to train your dog for field trials, I’d recommend encouraging them to run straight and far out from an early age. It’s easier to rein in a far-ranging dog than try to push out one that hunts close. I ran into this issue when I was training Zara for the Vizsla Club of America’s National Gun Dog Championship. I had focused on hunt tests for so many years and it was a bit of a challenge to get her to move further out.

Prior to the NGDC, I worked on getting Zara to stay in front of me and turn on the whistle (two blasts).

Field trials allow more handling and commands than Master level hunt tests. In field trials, handlers may be calling/singing to their dog fairly often. Since the dog is usually far away from the handler, doing so tells the dog where the handler is. You can also give multiple commands when the dog is on point (such as whoa) or when sending for a retrieve. This is not the case in hunt tests. The AKC rulebook for hunt tests says that Master level dogs must “…handle kindly, with an absolute minimum of noise and hacking by the handler.”

Handling After the Flush

After a dog points a bird and the handler flushes it, the handler will fire their blank pistol in both hunt tests and field trials if the gunners are not going to shoot it. However, what happens next is very different in the two events. In Master level hunt tests, you have to heel your dog off leash away from the bird without an excessive number of commands. They cannot engage in a delayed chase of the bird. This can be difficult if the dog is amped up and wants to retrieve.

In field trials, the handler returns to the dog and grabs its collar and then walks (drags) the dog a significant distance away from the bird before it is released again. This practically ensures there is no delayed chase. When I first saw this play out when I went to a field trial this spring, I couldn’t believe how much easier this was than off leash heeling. After spending a lot of time working on Zara’s heel, this almost seemed like cheating!

Senior and Master level hunt tests require retrieving and a dog cannot receive a placement without a decent retrieve. In Master hunt tests, dogs must retrieve the bird to hand with minimal commands. In field trials, the retrieve can involve a lot more handling. When I was at the NGDC, which is judged by field trial rules, I watched one of the top field trial vizslas in the country retrieve a bird. I was taken aback by the sloppiness of this dog’s retrieve. The handler sent the dog to fetch and said “fetch” multiple times while advancing toward the dog. The dog couldn’t find the bird and searched around for a while before he found it. After picking it up, he circled around the handler at least three times before the handler managed to grab it away from him. Despite this, the dog was rewarded with a placement at this national event. I’m not sure that dog would have even passed at a Master hunt test.

In field trials, retrieving is often done as part of a callback after the stake is over. If the dog is being considered for placement, the judges set up a scenario to test retrieving ability. This is done so that the official gunners don’t have to walk the course with the handlers. In hunt tests, shooting and retrieving is done on-course once the handlers enter the bird field. The gunners walk along with the handlers. 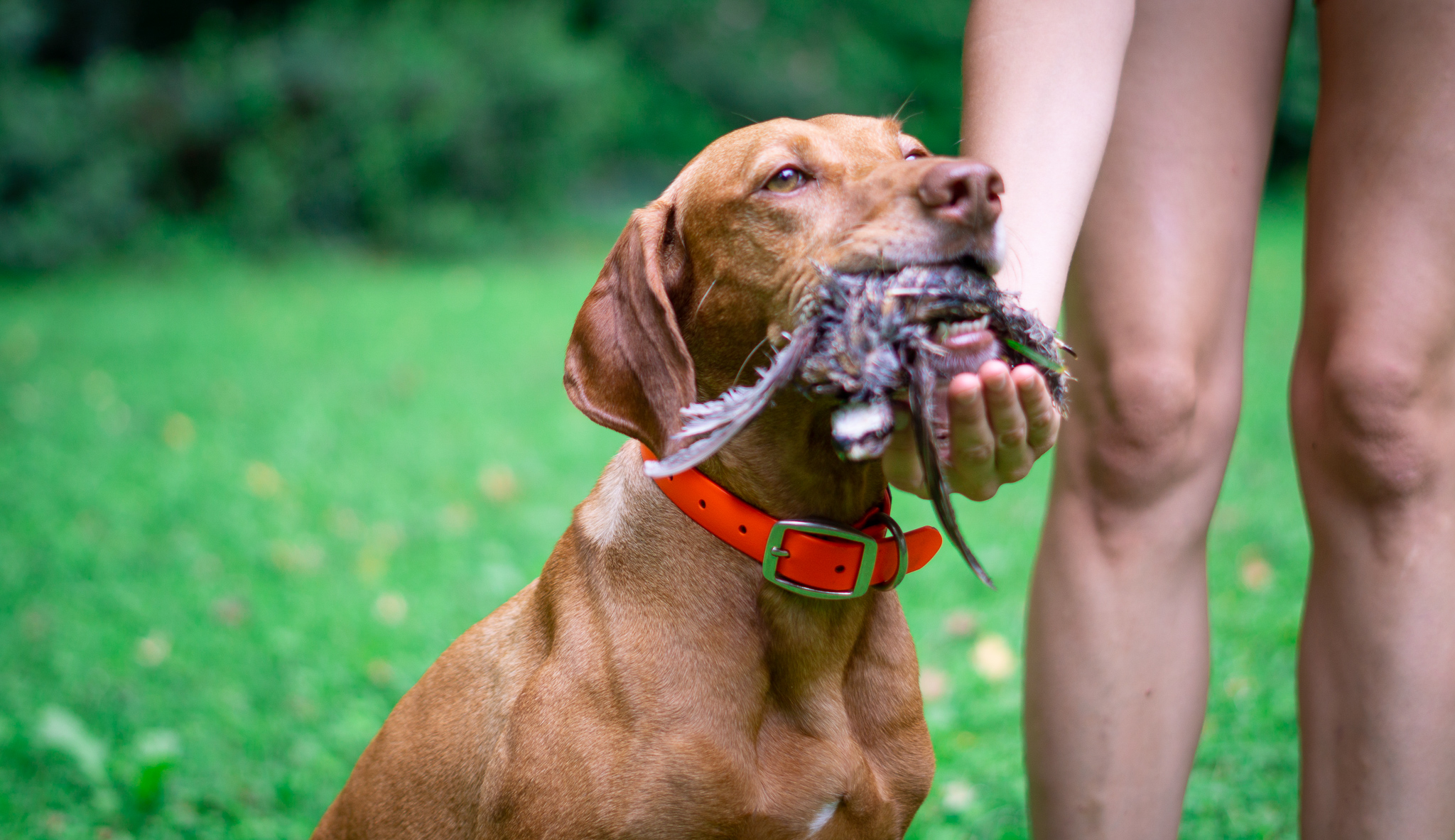 In Senior and Master hunt tests, backing and honoring are required in order to pass. At the Senior level, you can command a dog into backing its bracemate, and once the dog has stopped, the handler can hold the dog by the collar as the bracemate’s handler flushes the bird. At the Master level, dogs must back their bracemate without a command and the dog has to stand off leash next to the handler as its bracemate retrieves. These retrieving sequences can often be quite long, depending on the retrieving skill of the bracemate and how far away the bird landed. At the first Master hunter test I did with Zara, she had to stand a good five minutes while her bracemate struggled to find the bird. She kept looking at me like, you’ve got to be kidding me. I have to stand here this whole time?! Thankfully she didn’t break and we managed to pass.

In field trials, backing is not required. However, if the situation presents itself, the dog should back its bracemate. The handler is allowed to give a command, though. And if the handler can’t find the bird and the bracemate needs to be relocated, the backing dog is allowed to be collared and moved on. This is not always the case in hunt tests. If the pointing dog is taking overly long to find the bird, the judges can tell the backing dog’s handler to move on. But I never had that happen in any of the Master tests we ran and several of tests involved long honoring sequences, as I mentioned above.

A lot of people compete in field trials on horseback. However, many horseback trials allow walking handlers and there are also walking-only stakes. The handler is always walking at a hunt test. Because the dogs run so much further out during a field trial, you’re probably going to cover a lot more distance in a field trial than a hunt test. If you’re trying to keep up with a fast dog, expect to walk at a fast clip! When preparing for the NGDC, I actually practicing power walking as Zara ran ahead. Although it’s not required, I knew that the faster I walked, the more that would push her out, which is what I wanted. I also wanted to be able to see what she was doing as much as possible. She was more likely to behave if I was in the vicinity versus if she couldn’t see me at all. However, it seemed that many handlers at the NGDC just strolled along at their normal walking pace.

Walking fast is needed less at a hunt test when you’re often circling around a bird field. But some hunt tests do have a long “back course” before you arrive at the bird field, so be prepared to be able to walk over potentially rough ground for 30 minutes.

A scout is a designated person at a field trial who helps the handler locate the dog. He or she rides a horse, even in a walking trial. The scout can never move in front of the judges, but they can move out left or right to try to find a dog who might be on point. The scout can also carry water for the handler, which I found very helpful during the NGDC. Since it was an hour-long stake and pretty warm, it would have been difficult for me to carry all of the water we needed. Any time I needed water, I could signal to my scout and she would come up to me. This also gives the handler a chance to talk to the scout and get any advice if needed. My breeder served as my scout during the NGDC and I liked having her there, because it felt like I had an extra person there to support me. There are no scouts in hunt tests.

Jane, my scout, helps me keep an eye on Zara during the National Gun Dog Championship.

Hunt Tests vs Field Trials: Which Are Easier?

I don’t think there’s a definitive answer to this question. When comparing hunt tests vs field trials, I think they even out. Since field trials are competitive, there is no guarantee that your dog will get a placement even if they perform well. At a hunt test, as long as your dog meets the standard requirements, they will get a pass. I trained for Master hunt tests first and then went to field trials. I do think that hunt tests have more stringent rules in regards to handling, the behavior after the flush, and retrieving. Because of this, the field trials felt a little “easier” to me. With that said, your dog has to have the range needed for field trials or they will not do well. That is not something that is as easily taught if you’re coming from hunt tests. I was lucky that Zara is from field trial lines and has always liked to run somewhat big.

On the other hand, if you start with field trials and go to hunt tests, it may be easier to rein in your dog’s range, but you’ll have to make sure that you work on your training so that your dog doesn’t need as many commands. You definitely have to have a more obedient dog in hunt tests.

Do you compete in hunt tests or field trials with your dog? Which do you prefer? Leave me a comment below!